Boston Harbor July 11 1656 “Why was it that the coming of two women so shook ye, as if a formidable army had invaded your borders."
George Bishop, New England Be Judged 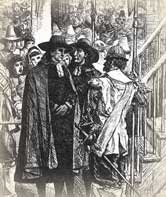 The first Quaker promoters and faith publishers to enter the borders of the Puritan Republic arrived in Boston Harbor aboard the Swallow in July of 1656. With them, they carried the prospect of a faith that held the promise of salvation for all who embraced the inward Light, unlike the rigid hierarchical system that governed the Colony and left most in the dark. Mary Fisher and Ann Austin were harmless Quaker missionaries, but the Mass Bay magistrates viewed them as intruders carrying an infection as poisonous as the apple Eve offered to Adam.
Though they found themselves in strange, unfamiliar waters, hope cloaked the auras of these two apostles of peace like bright halos as they longed for their universal reception; however, a stout source with a conscience for Puritan law and formalist ideals immediately sent word to the courts about these heretic passengers. The threat was ominous -- to the Puritan elders, the bowels of the Swallow harbored a hostile host that echoed the antinomian mood of Anne Hutchinson. It was immediately determined that the Colony would not entertain these muliebrous matrons or any of their blasphemous belching. 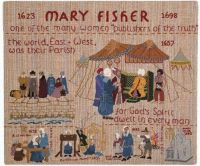 Governor John Endicott was tending to business affairs in Salem, so the report of their arrival first came to Deputy Richard Bellingham instead. Bellingham was convinced that the devil sent these disruptive dames “purposely to propagate their said errors and heresies.” He summoned a meeting with Deputy Governor Samuel Symonds and other local officials to exact action on this “extraordinary occasion.”

Although there was no statute concerning Quakers, shipmasters were forbidden to offer to passage into the colonies. So the the first order of business was to confine the threat and then probe the source that brought them here. Deputies ordered the Quakeresses to stay on the ship while they searched their trunks. Over 100 books and pamphlets were confiscated while Mary and Ann were confined to their rooms to await their fate.

Both imprisoned in England prior to the arrival in America, Mary and Ann were well aware of the punishment they might be facing. Both knew the pain of the whip and the confines of a cell, but this did not cool their "hearts warmed in Gospel” and fueled by a calling from on high. They were part of a movement that instilled a fire in their souls and the energy to travel to distant lands to preach the glad tidings of peace and salvation through Jesus Christ. Mary and Ann captivated many in Barbados and, no doubt, they felt driven to bring their message and true faith to Boston.
Officials interrogated Captain Simon Kempthorn, the shipmaster of the Swallow, and with great hesitancy, he divulged the Quakeresses' benefactor, Lieutenant Colonel Rous, whose sugar plantation was of considerable worth and a major source of vendibles. Kempthorn could not refuse Rous this courtesy as to anger or displease him would incur a great financial hardship for many. After hearing the shipmaster's response, Bellingham did not feel confident that Kempthorn could be trusted to police Mary and Ann and sent the officers back on board to apprehend the transgressors.
When Mary and Ann were brought before the court, they addressed the magistrates with the traditional speech of the Quaker faith -- their use of “thou” and “thee” left no question about their identity. Bellingham exclaimed that "he needed no more now… he now knew they were Quakers."
Upon further examination, Mary and Ann were found to be transgressors of the Colony's laws because they attempted to spread their “most corrupt, pernicious, heretical, blasphemous doctrines” through sundry books which where in contrary to the truth set forth by the Puritan church.
The local executioner burned their books in the town square and Mary and Ann were confined to the Boston jail. They were stripped and examined for witch marks, which Ann later reported in a letter was an experience more painful to endure than the five children she birthed. In order to preserve order, the windows were boarded up and all communication was cut off. They were denied food and water. After an imprisonment of nearly five weeks, along with the loss of their beds and Bible (which the jailer took for his fees), the two women were sent back to Barbados. In a letter to Margaret Fell, written from Barbados and dated September 3, 1656, Henry Fell refers to their return to the island: "Truly Mary Fisher is a precious heart, and hath been very serviceable here."
Fortunately, while Mary and Ann were locked away without light or nourishment, a local tavern owner came to their aid. Nicolas Upshall, who kept the Red Lion on North Street in Boston, bribed the jailer to slip some food to Mary and Ann -- they may not have survived the five-week ordeal without help from this great sympathizer. According to the records, officials apprehended Upshall in October 1656. According to Records of the Court Assistants of the Colony of Massachusetts Bay, he was: Fined $100, and ordered to leave the colony within thirty days, and was sentenced to pay beside $15 for every day he should be absent from public worship before his departure--evidently that he might be compelled to listen to pulpit denunciations of his wickedness in saving from starvation two fellow-human beings who worshiped God in a different fashion from their persecutors. 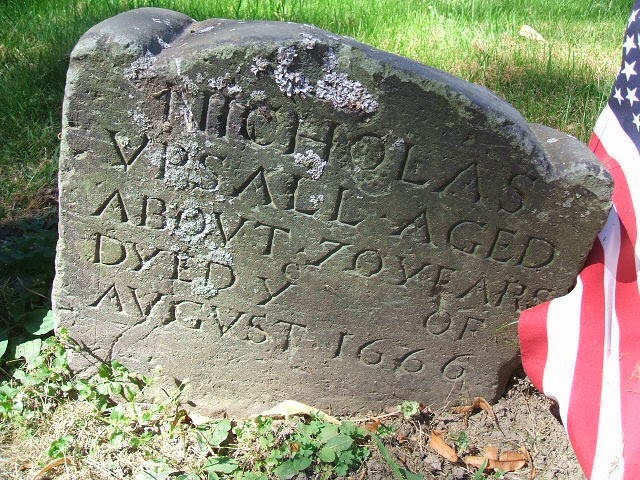 The court records report that wife Dorothy also gave testimony against her husband, which only added fuel to the fire. Denied asylum in Plymouth, the exiled Upshall followed the example of Roger Williams by seeking refuge among the Indians, who treated him kindly (Mann). Officials eventually ordered Simon Kempthorne to transport the Quakeresses back to Barbados, leaving a security to the Secretary in a bond of £100 Sterling -- and if he refused, he was to be imprisoned until he complied.
Upon finally hearing news of these events, Governor Endicott shook his head in disgust: “I regret my absence. I would have delivered a more a proper sentence to these vile heretics, and they would have not escaped without a good whipping.”
MARY FISHER explaining  her beliefs to the Sultan Mehmed IV in 1658. She had travelled to the Ottoman Empire not long after she and Ann Austin had been deported back to England from Massachusetts--No one was quenching her fire! Image source: A Popular History of the United States, Bryant & Gay, 1881 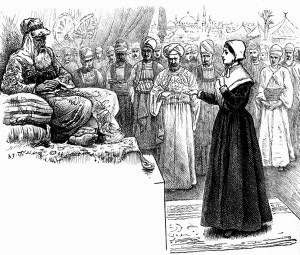 * Nicholas Upshall  came on the ship Mary & John in the Winthrop Fleet of 1630. He was "a man of substance, an owner of considerable property. and one of the first members of the Ancient and Honorable Artillery. He was a Quaker, and, says Drake, "was one of the first to feel the rigor of the persecution of the Quakers. He was banished, imprisoned, and at length in his old age died a martyr to the faith which, amid all his sufferings and hardships, he seems stoutly to have upheld." Upshall was buried in Copp’s-hill burying-ground. (Edmond Monroe Bacon)
Saturday, June 24, 1916
New Orleans States (New Orleans, LA) 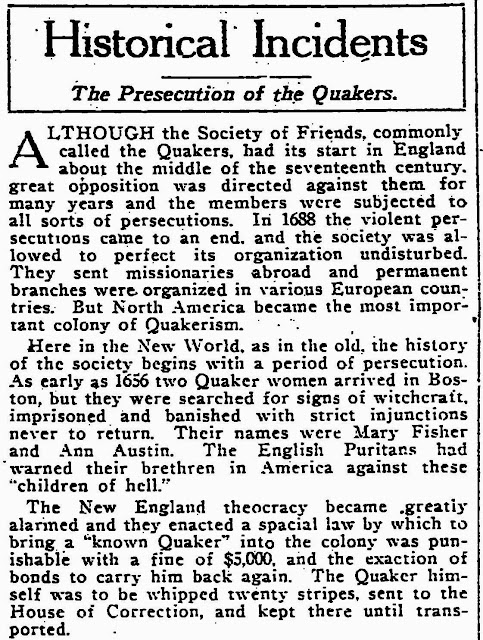 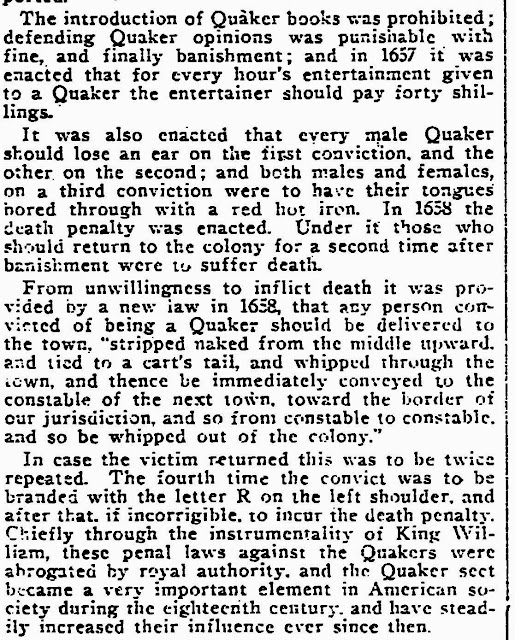 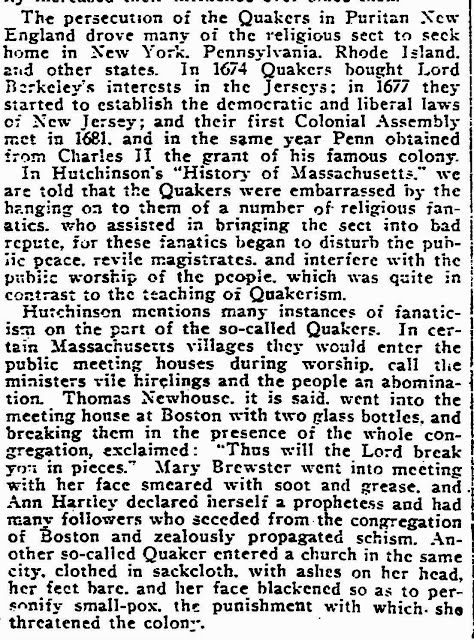 Sources
The Land We Live in: Or, The Story of Our Country by Henry Mann
King's Dictionary of Boston By Edwin Monroe Bacon
The History of the Colony of Massachusetts Bay: From the First Settlement Thereof in 1628, Until Its Incorporation in 1691. By Mr. Hutchinson
Walking in the Way of Peace : Quaker Pacifism in the Seventeenth Century: Quaker Pacifism in the Seventeenth Century Meredith Baldwin Weddle
Women in the Seventeenth-century Quaker Community: A Literary Study of Political Identities, 1650-1700 Catie Gil
Puritan Boston and Quaker Philadelphia E. Digby Baltzell
New England be Judged by the Sprit of the Lord George Bishop
A History of the People Called Quakers: From Their First Rise to the Present Time. Compiled from Authentic Records, and from the Writings of that People, Volume 2 John Gough
The Friend, Volume 82
Quakers and Baptists in Colonial Massachusetts Carla Gardina Pestana
The Ecclesiastical History of New England: Comprising Not Only Religious, But Also Moral, and Other Relations, Volume 2 Joseph Barlow Felt
Faith and Fortune: Religious Identity and the Politics of Profit in the Seventeenth-century Caribbean
Posted by Melissa Davenport Berry at 10:59 AM