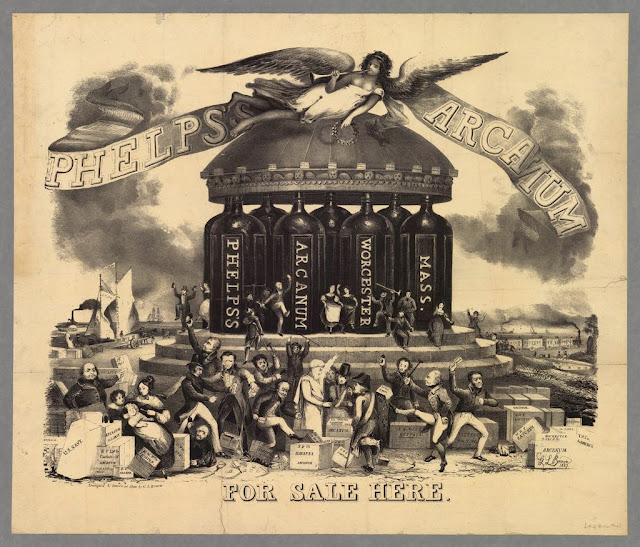 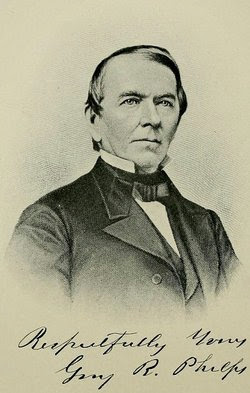 Photo from Find A Grave

In November 1837, Miles selected Hoadley, Phelps and Co., a wholesale drug firm, as his agent in New York City. In December of that same year Dr. A. J. Holcombe became upset with Miles’s claim that Miles was the originator of tomato extract. Holcombe pointed to his own previous advertisements, which predated Miles’s announcement by two years. John Cook Bennett immediately agreed with Holcombe and shared his recipe with the newspapers that in turn shared it with “the community at large.” It was basically condensed tomato juice with the consistency of stiff tar. 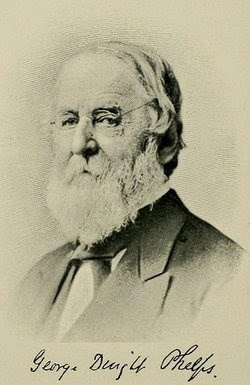 George and Guy R. Phelps
(PHELPS’ COMPOUND TOMATO PILLS)
After Miles discovered that a Dr. Rowland’s Compound Tomato Pills was being advertised in Boston, New York, and Hartford, Connecticut. Miles had his agent in New York investigate the situation. The agent went directly to Hoadley, Phelps and Co. and spoke to the bookkeeper who was the only person at the company’s office the day of the visit. The agent’s version of the conversation is as follows:

“Ah,” said I, “you have the Tomato medicine; do you sell much of it?”
“No! We have sold but a few dozen.” “Oh,” said I; “well I see by this
handbill you have here, that you have another Tomato medicine.” The
handbill stuck up was “Compound Tomato Pills, Blood Purifier, and
Universal Panacea, prepared by G. R. Phelps. Price 37 ½ cents per box.”
The clerk remarked, “that medicine we can recommend to be a fist rate
article.” “Oh,” said I, “it’s, prepared, I suppose, by Mr. Phelps, of this
firm.” “No,” he replied, “by his brother!”

George Phelps’s brother was Guy R. Phelps. He was born in 1802 in Simsbury, Connecticut, and graduated in 1825 from Yale’s Medical School. He settled in New York to practice medicine and worked for Hoadley, Phelps and Co. In November of 1837 George Phelps began advertising Dr. Rowland’s Compound Tomato Pills. Advertisements for both pills appeared simultaneously in Hartford and Boston. The name was subsequently expanded to Dr. Phelps Compound Tomato Pills. The pills came in an oval wooden box two inches long and three-quarters of an inch wide with the name DR. PHELPS COMPOUND TOMATO PILLS – ENTIRELY VEGETABLE on the top. A thin strip connected the top to the bottom. When the box was manufactured, or how many pills it contained, is unknown. The box had the price of twenty-five cents on it. Guy R. Phelps’s signature extended the length of the other side. The box was constructed so that when it was opened, the signature was destroyed. It was evidently intended to prevent the box from being refilled with some other concoction by a counterfeiter. Phelps claimed that his were made from the leaves and stalks of the tomato plant.

Despite this basic difference, the advertising claims for the pills were essentially the same. These claims, as strange as they may seem today, were imbedded in medical beliefs and practices in the mid-nineteenth century.  According to medical historians the whole point of many cathartics, such as tomato medicine, was the notion that emptying the bowels of their contents and emptying the liver’s bile into the intestines would help remove noxious substances wherever they were in the body.