Oliver Hopkinson Relic of the Old Bar with a Potent Pedigree 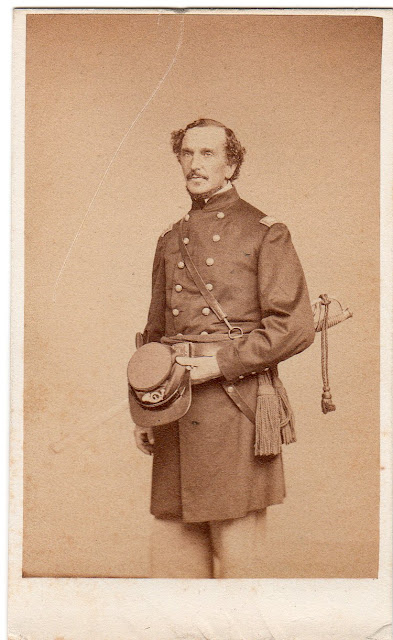 Lieutenant Colonel Oliver P Hopkinson (1812-1905), was a distinguished barrister, statesmen, and soldier. He was the son of Joseph Hopkinson and Emily Mifflin, d. of Pennsylvania Governor Thomas Mifflin and Sarah Morris. Grandson of Francis Hopkinson, (lawyer, writer, musician and patriot who signed the Declaration of Independence) and Nancy "Ann" Borden, d. of Joseph Borden and Elizabeth Rogers. Gr Grandson of  Thomas Hopkinson and Mary Johnson Photo from the collection of Scott Hann cited AOTW.ORG 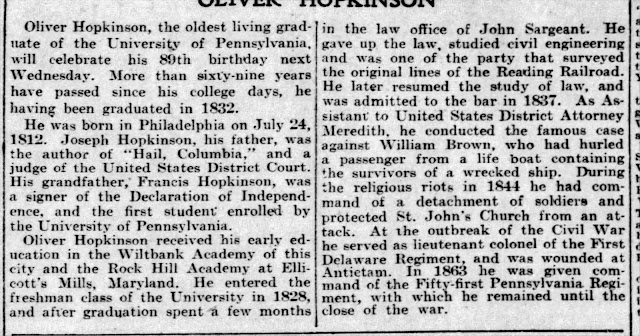 Hokinson served in the Civil War as Lieutenant Colonel of the 1st Delaware Volunteer Infantry, being commissioned on October 15, 1861. At the September 17, 1862 Battle of Antietam he was wounded in the knee, and he resigned his commission on December 14, 1862. On July 10, 1863 he was commissioned as Colonel and commander of the 51st Pennsylvania Militia, which was raised to counter the Confederate Invasion of Pennsylvania in June 1863. he was mustered in on July 10, 1863, and was mustered out on September 2, 1863. He resided in Philadelphia, but still retained the old Hopkinson mansion at Bordentown, New Jersey, where with his family usually spent the summer months.

The Delaware Troops named their theater Hopkinson Hall in honor of Oliver. According to Pirates and Patriots: Tales of the Delaware Coast the first event hosted by the regiment was a ball. The attendees were the officers of a French war-vessel anchored near Fort Monroe.

A few of the fellows of the Delaware decided to stir up drama by inviting Confederate General John Magruder: "some of the wags amused themselves by nailing to a tree outside the picket line the invitation to Magruder and staff to attend ball." It was the troops response to Magruder's weekly demand to surrender the fort or remain in it under his peril. 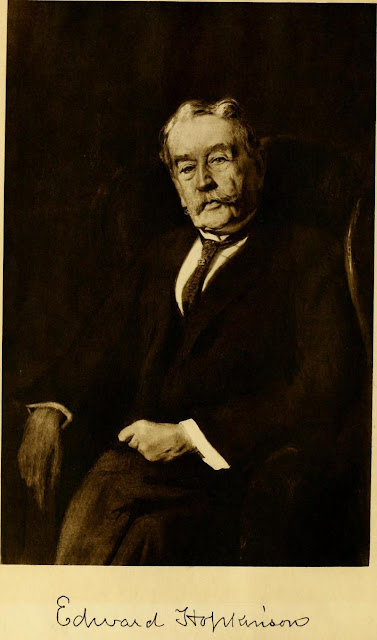 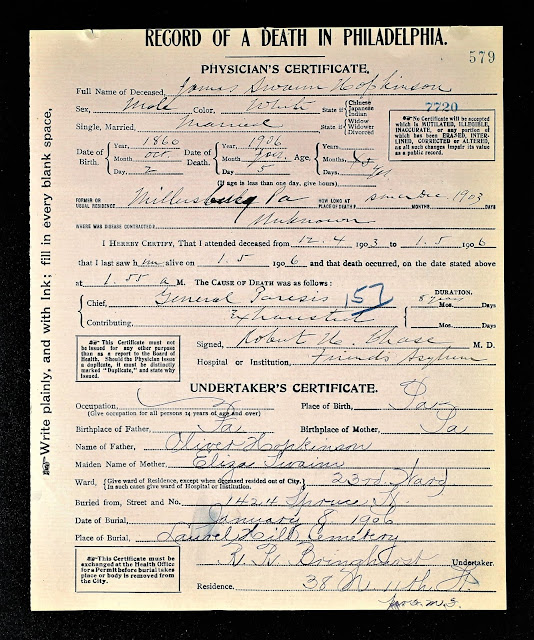 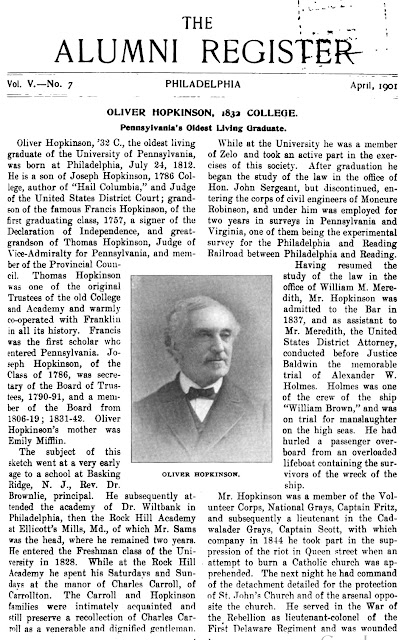 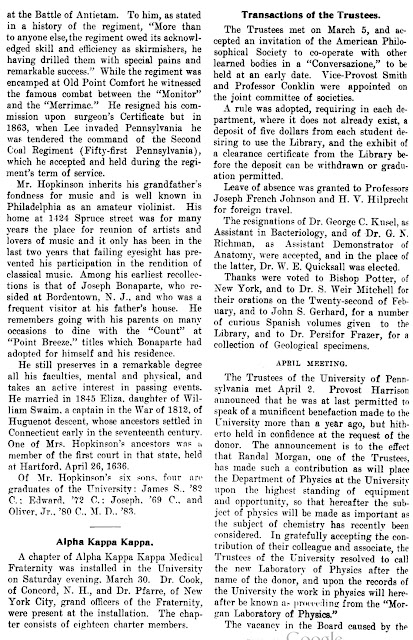 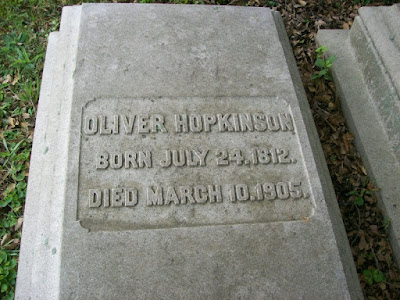 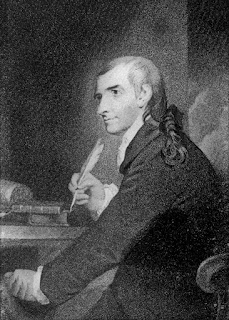 Francis Hopkinson was familiar with the sciences, skilled in painting and musical composition, often arranging the music of his own songs--the first native American composer of a secular song in 1759. When General Washington became President, he addressed to Judge Hopkinson a highly complimentary letter, enclosing a commission of United States District Judge for Pennsylvania. See George Washington's Mount Vernon 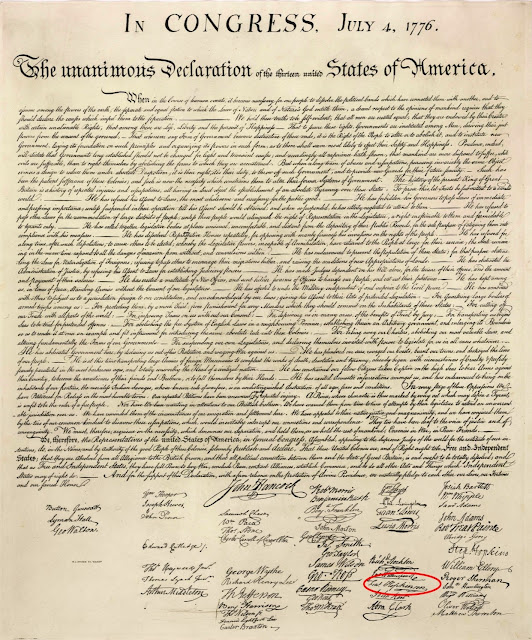 From Founding Fathers Blog Francis Hopkinson, Christian, Patriot and a Signer of the Declaration of Independence 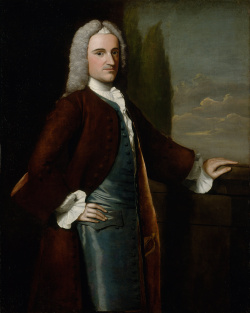 Thomas Hopkinson was an intimate friend of Benjamin Franklin and was the first to see exhibited Franklin's experiment of silently drawing the electric fluid from the clouds by a pointed, instead of a blunt instrument.
He would help to establish the Philadelphia Library. 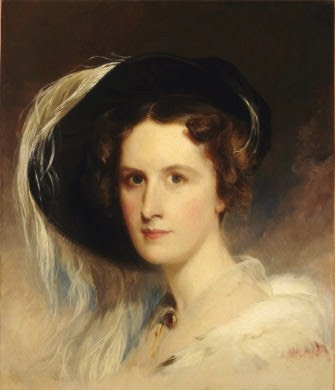 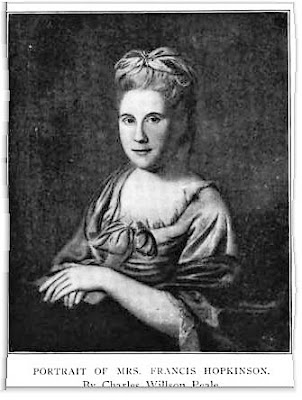 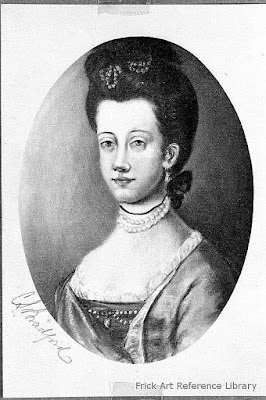 Above Ann Borden Hopkinson and and Mary Borden, elder sister and the first wife of Thomas McKean. Both women were "famously beautiful", according to Wives of the Signers: The Women Behind the Declaration of Independence, by Harry Clinton Green and Mary Wolcott Green, "the handsomest in girls in New Jersey." Below is a poem written by Francis Hopkinson for Mary: 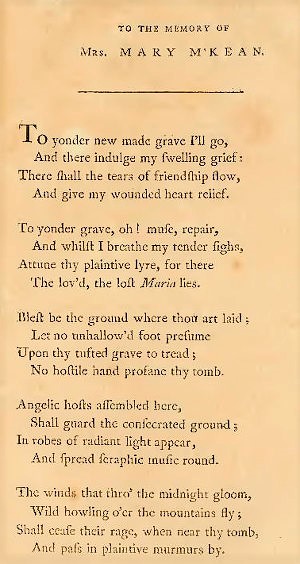 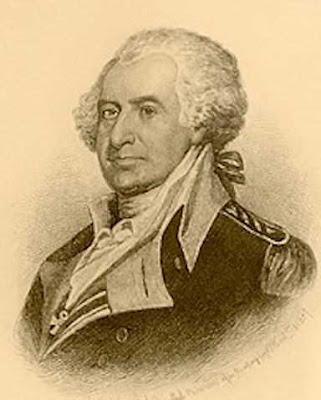 Major-General Thomas Mifflin (1744-1800) son of John Mifflin and Elizabeth Bagnell, a member of the American Philosophical Society 1765-1799; member of the colonial legislature 1772-1774; Member of the Continental Congress 1774-1775 and 1782-1784, and was its President in 1783; major and chief aide-de-camp to General Washington July 4, 1775; major and Quartermaster General of the Continental Army August 14, 1775, and promoted through the ranks to major general February 19, 1777; member of board of war November 7, 1777; resigned as major general February 25, 1779; trustee of the University of Pennsylvania 1778-1791; served as speaker of the State house of representatives 1785-1788; delegate to the Federal Constitutional Convention in 1787; president of the supreme executive council of Pennsylvania October 1788 to October 1790; president of the State constitutional convention in 1790; Governor of Pennsylvania 1790-1799; again a member of the State house of representatives in 1799 and 1800; died in Lancaster, Pa., January 20, 1800; interment in the front yard of Trinity Lutheran Church.|Bibliography: Rossman, Kenneth R. Thomas Mifflin and the Politics of the American Revolution. Chapel Hill: University of North Carolina Press, 1952. 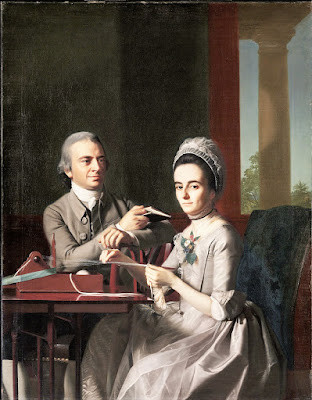 Portrait of Mr. and Mrs. Thomas Mifflin (Sarah Morris) Singleton Copley, American, 1738 - 1815 Accession Number:
EW1999-45-1Credit Line: 125th Anniversary Acquisition. Bequest of Mrs. Esther F. Wistar to The Historical Society of Pennsylvania in 1900, and acquired by the Philadelphia Museum of Art by mutual agreement with the Society through the generosity of Mr. and Mrs. Fitz Eugene Dixon, Jr., and significant contributions from Stephanie S. Eglin, and other donors to the Philadelphia Museum of Art, as well as the George W. Elkins Fund and the W. P. Wilstach Fund, and through the generosity of Maxine and Howard H. Lewis to the Historical Society of Pennsylvania, 1999 Philadelphia Museum of Art 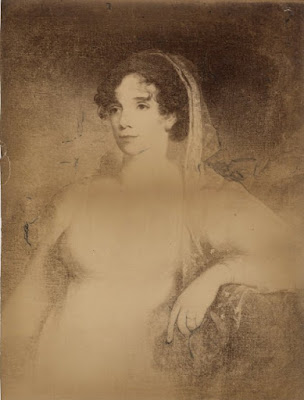 Emily Mifflin Hopkinson by Thomas Sully, 1808. The wife of Joseph Hopkinson, Emily "had a sharp wit and a talent for art and writing. "