... must ever be the pledge, that New-England's sons will vindicate their ancestry.

Many critics note that author Nathaniel Hawthorne* was both captivated and repulsed by his ancestral line. The sins of his own forefathers are central themes for most of his work. These ancestors played on both sides of the justice scale, but equally influential.
*Nathaniel Hawthorne (1804-1864) was the son of Elizabeth Clarke Manning (1780-1849) and Nathaniel Crowninshield Hathorne (1775-1808). Both families were rooted in Salem from its early settlement. A Great Source compiled by Professor Terri Whitney and Dr. Sandra Carriker is Hawthorne in Salem
From his paternal side, Major William Hathorne and his son Judge John Hathorne, “the grave, bearded, sable-cloaked” men who came to rule with “Bible and sword," represent the stoic, stern Justice of the Puritan way.
From his maternal side, Captain Nicholas Manning, the family progenitor, was "the vile transgressor," who infected  the pious Hawthorn's "New Jerusalem." He was the son of Thomas Manning, brother to John Manning, Hawthorne's maternal grandfather who settled Ipswich, Massachusetts.
Captain Manning was the perpetrator of an illicit sexual scandal which shocked the Puritan community and haunted the family for generations.
The scandal definitely fueled the creative fire for “The Scarlett Letter.” 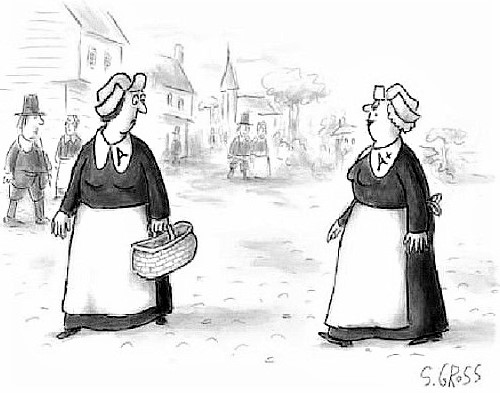 Captain Nicholas Manning (1644-1724) mariner and skilled gunsmith arrived in Salem in 1662. He quickly assimilated into the Puritan fold. He served as soldier, constable and selectmen. He married Elizabeth Gray, a widow much older than he in June 1663.  She brought into the marriage children fathered by Robert Gray.
Manning, celebrated soldier fought under Captain Nicholas Paige in the King Philip’s War. For his bravery in the “Great Swamp Fight” he advanced to the rank of captain and it seemed as if all he touched turned to gold.
In 1679 Manning’s successful ventures provided him the means to secure passage on the Hannah and Elizabeth for his parents Richard Manning (1622-1679) and Antis Calley (1625-1697) along with his six siblings.
Within a year of living in Salem the Manning clan became the center of a scandal. In 1680, Elizabeth Gray Manning unleashed her husband’s incestuous relationships with two sisters, Margaret Manning (1656-1720) and Anstis Manning (1655-1704).

All three Manning were convicted of “incestuous carriage,” but Nicholas fled the colony leaving his two sisters to suffer the humiliation of public punishment known as “branding.”  Margaret and Anstis were ordered by the court to stand on Sabbath day with a paper upon each of their heads, with their crime written in capital letters—INCEST, My Whorish carriage.” (RFQCEC V 8)

Although Hawthorne’s character Hester Pyrnne bears a permanent brand worn upon her breast, it is certain the Manning women felt slighted and degraded by society even without the “hot iron” reminder.
In 1683, Elizabeth Gray Manning obtained a divorce from Nicholas Manning on the grounds of the incest case.

Nicholas Manning escaped to Maine and married Mary Mason, daughter of Captain John Mason and Elizabeth Gent.  Mason became one of the largest landholders in the region. (York Deeds Book 7 F 18) He was appointed a judgeship.
By 1709, Nicholas and Mary Manning were living with in Staton Island New York.
BUT...An Even Bigger Scorcher!

Margaret Manning had more to than the incest scandal. She was pregnant when charged and had recently married Walter Palfrey (1655-1713) sail-maker on May 6, 1680. Palfrey endured the rumors on who actually fathered the child, but still welcomed his son, Richard Palfrey, born May 7 1681. The couple did ride out the storm and would have six more children.

According to Sydney Pearley, “his {Walter Palfrey} posterity left their imprint upon the history of the town in commerce, trade, and journalism.” (History of Salem Vol. III)
Richard Palfrey married Hannah Harris (1673-17) in June of 1704. They had two children Hannah and Walter.
Ancestor Captain Peter “the Pioneer” Palfrey, who was the Ancient Ensign of the band referenced in Hawthorne’s Twice Told Tales story, “The May-Pole of Merry Mount.” Peter came on the ship "Abigail" in 1624 with the "Dorchester" Company. He was one of the original Planters under Governor Roger Conan.
These are two pages from Dow's book on the Manning court cases (the originals are housed at the Peabody Essex Museum) All the nine volumes of "Records and Files of the
Quarterly Courts of Essex County" can be found on line at University of Virginia

Sources:
Posted by Melissa Davenport Berry at 10:14 AM