A "Mary Starbuck with an attitude," says Nathaniel Philbrook in his book Away Off Shore: Nantucket Island and Its People, 1602-1890 Chapter 12 is a great read! These families are part of my direct line through the Coffin, Greenleaf, Garner, Davenport, Moody, Noyes, and Folger. Three of Tristram Coffin's children married into my family line. I have provided several links to the stories, history, and genealogy below. Enjoy!
On Dec 4 1740 Kezia Folger (1723-1798) daughter of John and Abigail (Folger) Folger. married John Coffin (1708-1788) son of Samuel Coffin. Kezia's parents were cousins that is why the have the same last name.Her mother's parents were John Folger (son of Peter Folger and Mary Merrill) and Mary Barnard (daughter Robert Barnard and Joanna Harvey) They too were cousins same last name. More Coffin and Folger info 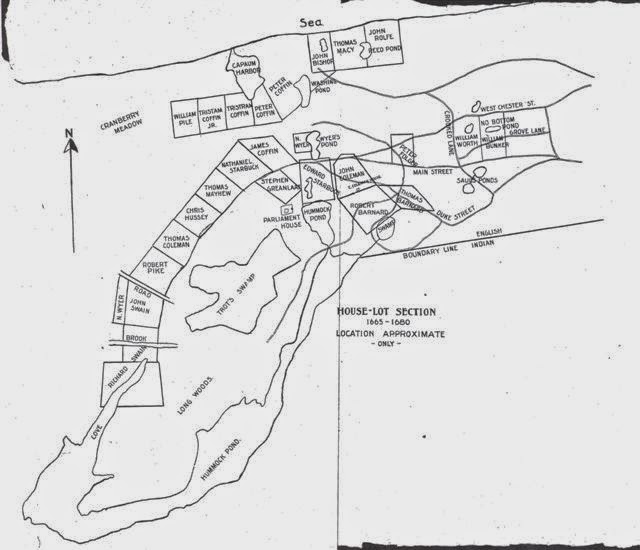 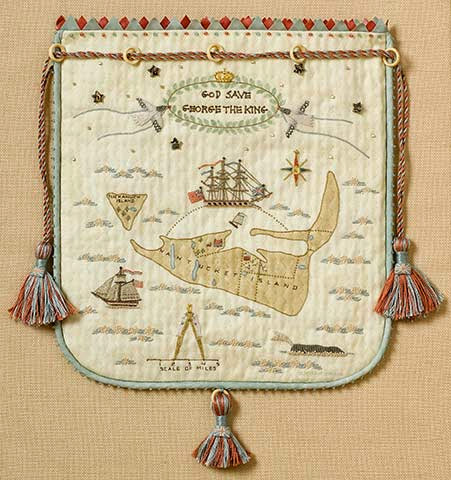 From America Volume 35  Kezia Folger Coffin, spoken of in affectionate terms in letters of Benjamin Franklin, Abiah Franklin and Jane Mecom, "achieved her niche in general as well as local ... A woman of more than average courage, ability and independence, she was one of the important merchants and ship owners of Nantucket. ... She was the daughter of Daniel Folger, grandson of Eleazer, and his cousin, Abigail Folger, daughter of John. At seventeen, she married a whaling captain fifteen years her senior. 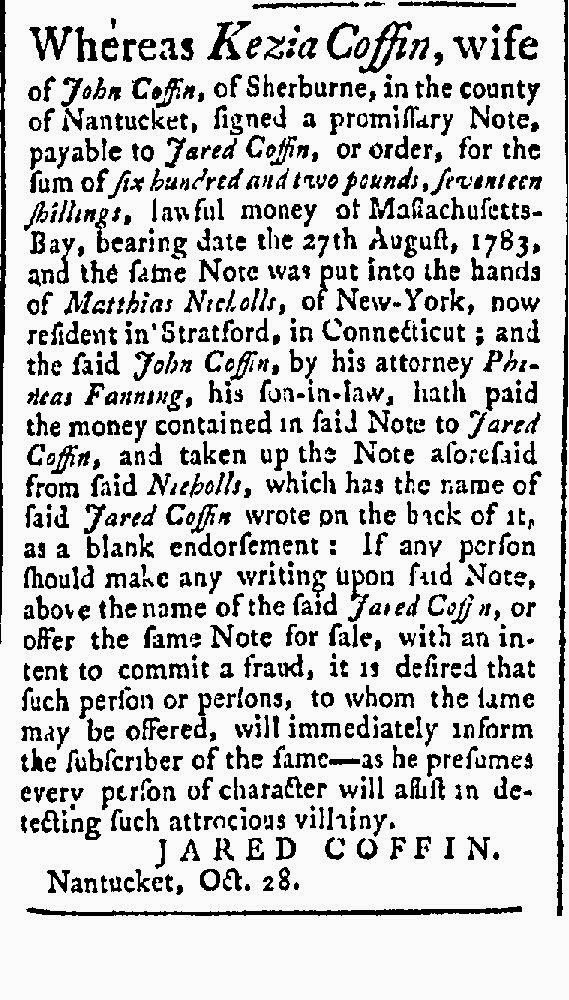 For many of the facts in relation to this celebrated woman, the compiler again makes his acknowledgments to William C. Folger, Esq. Keziah Folger was the daughter of Daniel and Abigail Folder. She was born Oct. 9,1723. This Keziah Folger, who married John Coffin, built the John Cartwright house on Centre Street, owned the farm* and old house at Quaise, and was at one time a great merchant and owner of vessels; was the heroine of Col. Hart's book, " Miriam Coffin; or, The Whale Fishermen." She fell down-stairs at the Morris house on lower Main Street, and died suddenly March 29,1798. This woman was undoubtedly possessed of superior ability. It is generally believed that Keziah Coffin and others rendered assistance to the British during the Revolution, and that she was guilty of smuggling to a very large extent. F. C. Sanford, Esq., says: "She had her ships in every sea, and was a famous smuggler in her day, as can be found by the Colonial Records in Boston which were made at the time of her trial in Watertown, this State, a copy of which I have. Her town residence was unequalled when it was built in 1770. It stood on what is now the elegant green lawn adjoining the Hon. C. B. Swain's house on Centre Street. Mr. Folger again says: "The daughter of Keziah Coffin, who bore her mother's name, married Phinoas Fanning,f a young lawyer, who is said to have written the verses describing the characteristics of certain Nantucket families of his day. They were married by the Rev. Bezaleel Shaw, who was then the Congregational minister, April 5, 1777. Five sons and two daughters were the result of the marriage. Mr. Fanning died Dec. 21, 1798, and his wife Nov. 20, 1820. There are two versions of these verses of Mr. Fanning's, which have perhaps more than a local celebrity; both are here given, and the reader can take his choice. The following is the version which William C. Folger, Esq., claims is the correct one: — "The Rays and Russells Coopers are; The knowing Folgers, lazy; A learned Coleman very rare,
And scarce an honest Hussey." "The Coffins noisy, boisterous, loud, The silent Gardners plotting, The Mitchells good, the Barkers proud, The Macys eat the pudding. "The Swains are swinish, clownish called, The Barnards very civil, The Starbucks they are loud to bawl, The Pinkharas beat the devil."
* The " Ruth " of Col. Hart.
t The " Grimshaw" of CoL Hart in "Miriam Coffin," who from all accounts appears to have amounted to but little.

The second version is from the novel "Miriam Coffin," whose author has seen fit to change materially the original. Those words which are italicized in the lines that "follow will show what'liberties have been takeri.
"The Kays and Russells coopers are, The knowing Folgers lazy,
A lying Coleman very rare, And scarce a learned Hussey. J,
"The Coffins noisy, fractious, loud,
The silent Gardners plodding,
The Mitchells good, the Barkers proud,
The Macys eat the pudding."
The last verse being entirely omitted.
The reader will perceive that the Macys, in both versions, "get the pudding," and that the Husseys are the " under dogs " in the fight; while in one case the Colemans are fools, and in the other they are generally honest. Both agree, however, that the Folgers are a learned but lazy set, and the Coffins noisy and loud, with the addition of being fractious or boisterous as it suited the fancy of the writer. They agree also that the Rays and Russells are coopers, and the Gardners silent, but seem to differ as to whether they are a hard-working, painstaking family, or a scheming and contriving one. The Barkers and the Mitchells have the best of it anyhow, and these families should have intermarried.
From The Franklin Papers:
To Keziah Coffin
Reprinted from The Nantucket Inquirer, January 26, 1824; transcript: Harvard College Library (Sparks)
Loving Cousin,
I had the Pleasure of hearing yesterday, on Enquiry of our Cousin Folger, that you and your Husband and Daughter were well, when he was last on the Island. I recollect that when I sent you the Sliding Plate, I received a Dollar more than it came to, which I thought to have settled when I should send you the cast Plates; but as that perhaps was omitted after I came away, and I know not whether the Plates were even made or not; I send you herewith a Pair of very nice Snuffers in some sort to ballance that Account; they cost 6s. Sterling, which is a little more than the Dollar.
Seeing some very neat Candlesticks where I bought the Snuffers, with a pretty Contrivance to push up from the Bottom, I bought some for my wife, and a Pair I send you, which I pray you to accept as a Token of Regard from Your affectionate Kinsman
B. Franklin
Remember me kindly to your Husband and Daughter, Tho’ I am unknown to them. [In the margin:] The Things are in a little Box directed to you.
Superscribed: To Mrs. Keziah Coffin, Nantucket. Per fav’r of Mr. Folger, with a Box.

[Keziah Folger Coffin]: Genealogy of the Folger Family
AD: Historical Society of Pennsylvania
John Foulger the Ancestor of our Family Came out of the City of Norwich in the County of Norfolk. He married Miriba Gibs in Great Britain and Brought Hir and His Son Petor and one Daughter to new england. The Daughter married to a Paine on Longisland and there is a numerous of Spring from Hir but for Perticlars, I know nothing. Peter married with Mary Morrils a young woman that Came from England with Hew Petors, and had two Sons, John and Eleazer and Seven Daughters namely Johanna married a Coleman Darcas married a Pratt, Barsheba married a Pope, Patiance married Harker, Bethiah married Barnard, Exsperiance married to a Swain, Abiah married Franklin. Bethiah Dyed without Issue. The Rest have Children and Grand Children to the forth Generation. John Had Six Sons and Eleazer Had three that all had Children so that there is a Great number of the name heare and until last year there was never one of the name that lived of this Island and than Shubil Foulger and his Son Beniamin Remooved to Cape Sables.
It is unsertain in what year John Foulger Came out of England or of what Age he or His Son was. As for the Lettor that I mentioned to thee it is not to be found.
[On a separate sheet in the same hand:]
John Foulger married to Mirriba Gibs in old England. By hir he had one Sone named Peter and one Daughter that married a Pain on Long Island. Peter married Mary Morrils and Settled on the Island of Nantucket. By hir he Had two Sons and Six Daughter the Sons nams John and Eleazer. Of Johns Children in the male Line there is Six named with ther Sons under neath 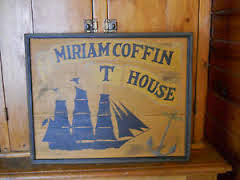 Dr. Benjamin Franklin to his cousin, Kezia Coffin, written from London, 1765, still in possession of Kezia Coffin's descendants, also a portrait of Kezia Coffin; a marriage license of 1770; colonial currency and papers 1748-1771, while among articles illustrating the early life of the State was a street lamp used by the Moravian settlers in 1710, handsome silver service and ornaments from the homes of such early governors as Johnston and Eden and from the De Rosset family, including a tankard over 200 years old; also knee and shoe buckles once worn by these old governors; some handsome pieces of silver which belonged to Mrs. Thomas Marker were shown, and an amusing caricature of the same lady, Penelope Barker, presiding over the historic Edenton Tea Party, of which the following account is given by Richard Dillard:

This association, formed October. 1TT4, was presided over by Mrs. Penelope Barker, and joined by Mrs. Elizabeth King, Mrs. Sarah Valentine, Miss Isabella Johnston, a sister of Governor Johnston, of North Carolina. Mrs. Hoskins, and forty-six other women, who signed a paper which read as follows: "We the ladys of Edenton do hereby solemnly engage not to Conform to that Pernicious Custom of Drinking Tea, or that we the aforesaid Ladys will not promote ye wear of nny manufacture from England, untill such time that all Acts which tend to enslave our Native Country shall be repealed.''