The Early Quaker Lines of Biddle and Wardwell Family

A few years ago I published two articles with Genealogy Magazine: Pious Pilgrims and Mayflower Misbehavior and Seventeenth-Century Quaker Sought Redress by Undressing.

William was raised by shoemaker Thomas Biddle (-1682) and Esther/Hester Biddle (1629-1697). According to "Colonial And Revolutionary Families Of Pennsylvania Volume I," William was an officer in the Parliamentary army during the civil war of England, but soon after its close joined the Society of Friends.

William and his family suffered persecution for their beliefs, including a stint at London's Newgate Prison. William, Esther and Thomas Biddle appear on Mayor Brown's prison list from 1660-61 for attending "nonconformist" meetings.
Esther Biddle was arrested fourteen times and dedicated her life for "Truths sake." Read more on her Quaker history https://shestoopstoconquer.wordpress.com/2015/07/28/quaker-women-the-rhetorical-method-of-hester-biddle-and-margaret-askew-fell-fox/

William Biddle was a close friend of William Penn and helped Penn get out of prison in England. The connection can be found in the letters and diary of William Penn. Also see The Papers of William Penn, Volume 4: 1701-1718

According to descendant Tony Biddle of Philadelphia, when William Penn was released from prison his repayment to Biddle was land in America. Penn, paraphrased by Tony Biddle in the article: “I want to repay you, and the good news is, I have a lot of land. The bad news is, it’s about 3,000 miles that way.” The Secret Lives of Wasps, by Amy Corman published November 1, 2005 Philadelphia Magazine)

Another article, "The Source of William Biddle's English Fortune," provides substantial evidence that his wife Sarah Kempe bankrolled the property in New Jersey. 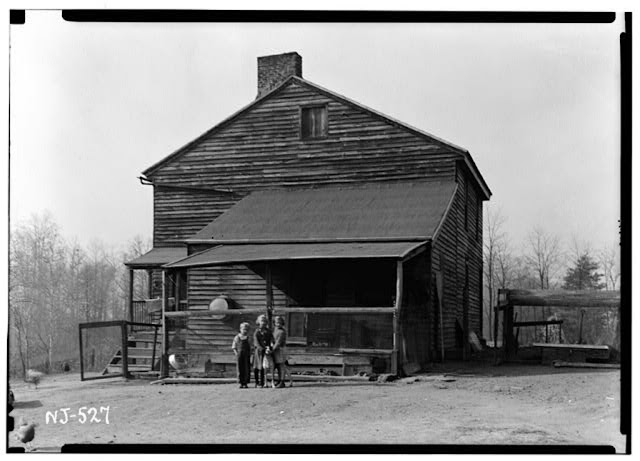 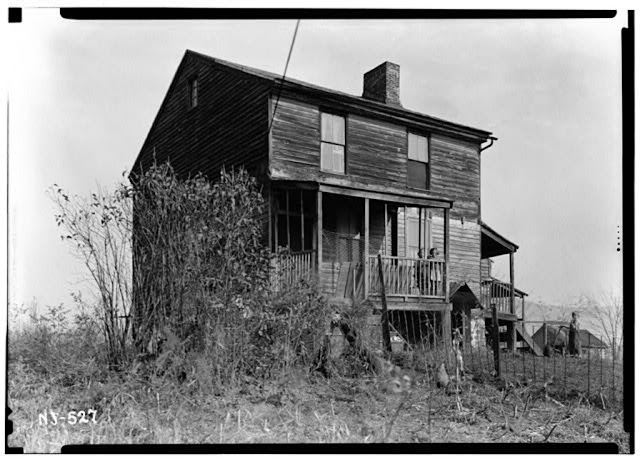 William's son, William Biddle II (1669-1743) was "prominent in the affairs of West Jersey; he was appointed by the Council of Proprietors on November 2, 1703, to treat with the Indians for lands above the Falls, and at his father's death inherited 12,905 acres of land in the Lotting Purchase." (J W Jordon)

He married  Lydia Wardwell (1670-1707) daughter of Eliakim Wardwell and Lydia Perkins, December 13 1691. a member of Friends meetings held at Shrewsbury.

Lydia Perkins (1640-1699) was the daughter of Isaac Perkins (1611-1685) of Ipswich, Massachusetts and Susannah (thought to be daughter of Humphrey Wise, but now disputed). Records show that after Isaac's death in 1685 a deed to his son Ebenezer “for support of self and wife Susanna” Susannah removed with son Ebenezer Perkins and family to Brandywine Hundred, New Castle, Delaware.

The Wardwells moved moved to Shrewsbury, New Jersey and Eliakim became one of the first Quaker ministers in the town. He purchased lands at Nevesink Indians, in 1666, He was Sheriff of Monmouth county, 1683, member of House of Deputies, 1688, and member General Assembly, 1692.

William and Mary relocated to Philadelphia and descendants would comprise the first major branch of the Philadelphia Biddle line, and family papers are housed at Special Collections, University of Delaware Library Newark, Delaware http://www.lib.udel.edu/ud/spec/findaids/biddle.htm

The Biddle family held government offices and served in the American Revolution. Later Biddle family members were honored for their professional contributions in the field of arts and letters. Sydney Biddle Barrows published an article, "The Biddles: Four centuries, one of America's first families," in the Philadelphia Inquirer (September 1986) noting many of her prominent Biddle ancestors, which I will post in another blog.

According to W. Sloane Kennedy, in "John Greenleaf Whittier
His Life, Genius, and Writings," Mr. Whittier stated to a member of the Massachusetts Historical Society that it was his intention "at some time to prepare a full and exhaustive history of the relations of Puritan and Quaker in the seventeenth century." It may all be found in the Proceedings of the Massachusetts Historical Society for 1880-81.


Two younger brothers of Eliakim Wardwell remained in Massachusetts after Eliakim and Lydia moved to New Jersey. His brother Samuel Wardwell (1643-1692) living in Andover, Massachusetts would hang for witchcraft. Read more at https://streetsofsalem.com/tag/salem-witch-trials/

Lydia's aunt, Mary Perkins (1615-1700) married to Thomas Bradbury (1611-1694) living in Salisbury, Massachusetts was another victim of the witch hysteria, but she escaped the rope--read more at The Witchcraft Trial of Mary Perkins Bradbury 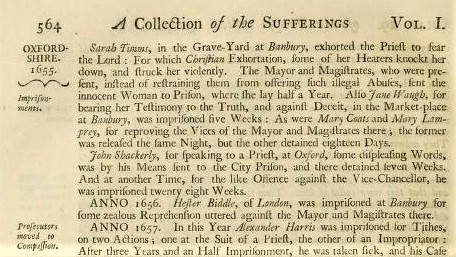 Hesther/Esther Biddle of London was imprisoned at Banbury (England) for some zealous Representation uttered against the Mayor and Magistrates there. 1656. From Joseph Besse, "A collection of the sufferings of the people called Quakers, for the testimony of a good conscience from the time of their being first distinguished by that name in the year 1650 to the time of the act commonly called the Act of toleration granted to Protestant dissenters in the first year of the reign of King William the Third and Queen Mary in the year 1689." published in 1753 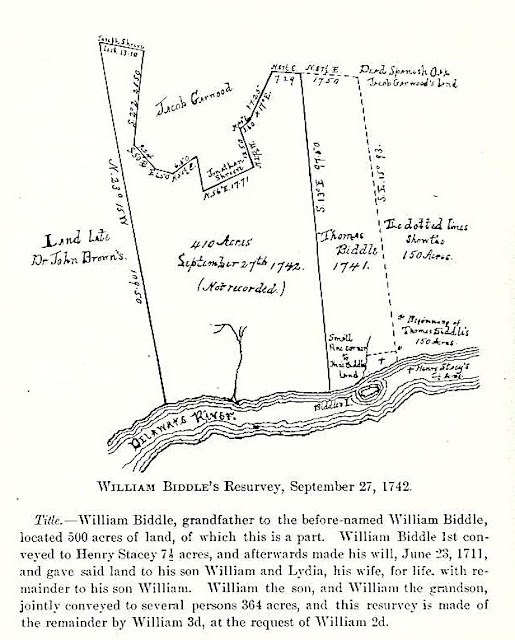 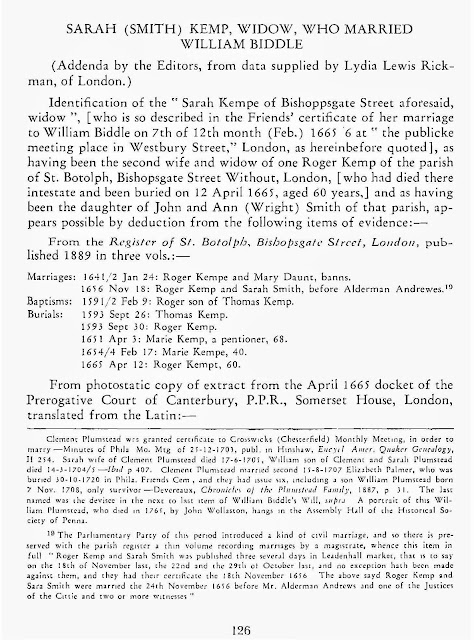 Genealogies of Pennsylvania Families from the Pennsylvania Genealogical Magazine. Volume I: Arnold-Hertzel The English Origins of William and Sarah Biddle of Mount Hope, Burlington County, N.J 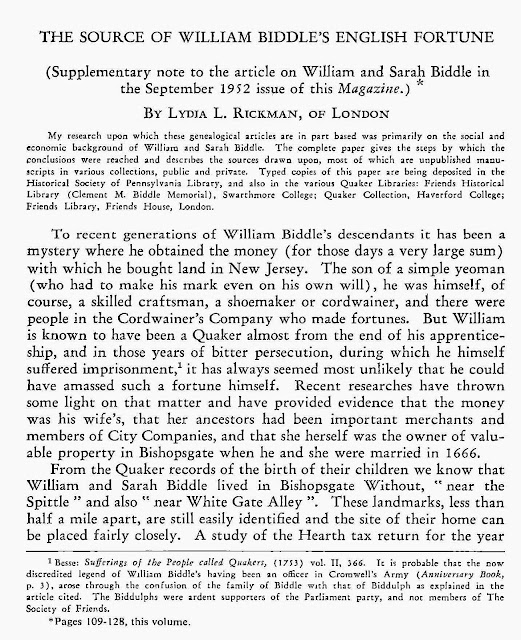 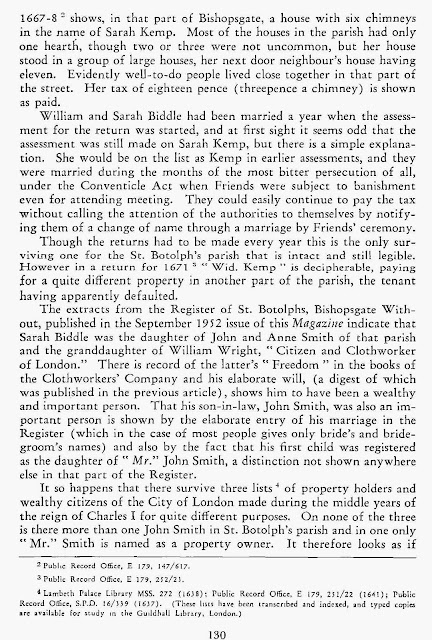 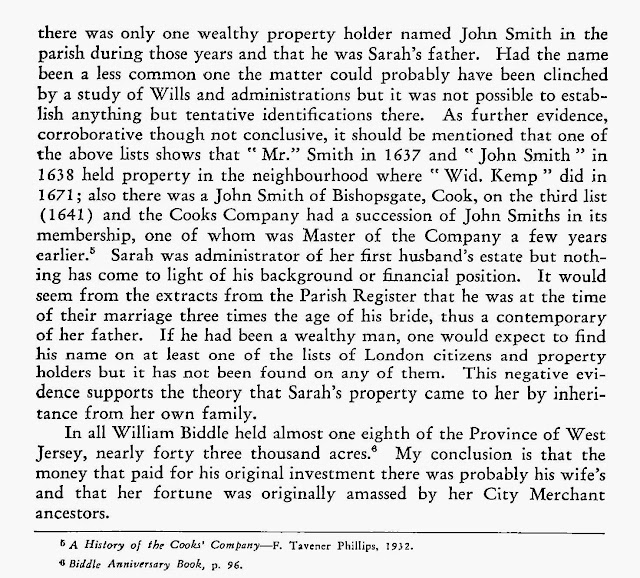 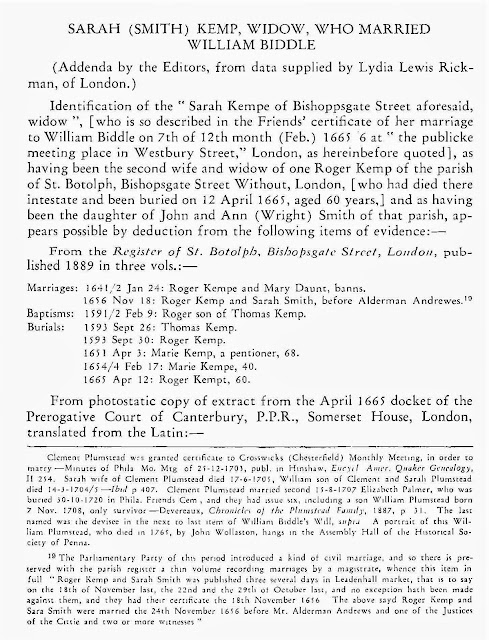 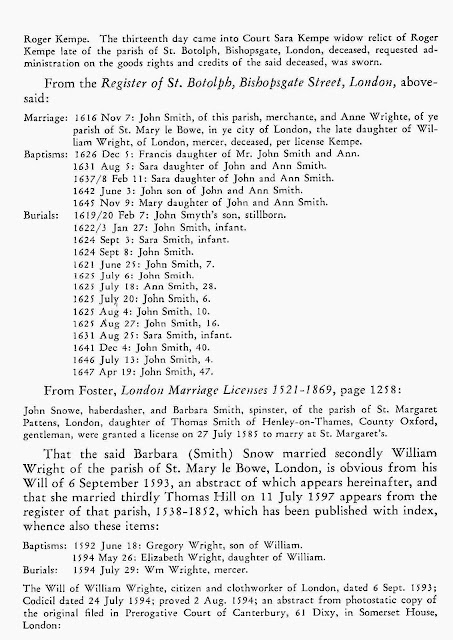 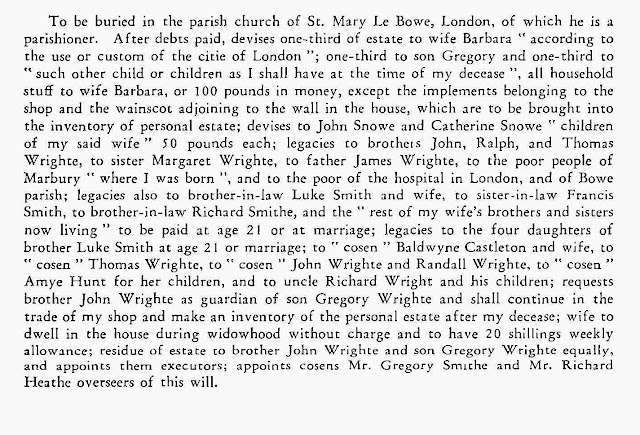 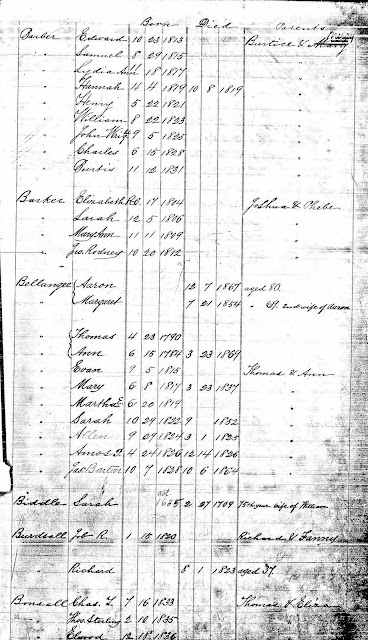 Death Record of Sarah Biddle, wife of William Biddle I 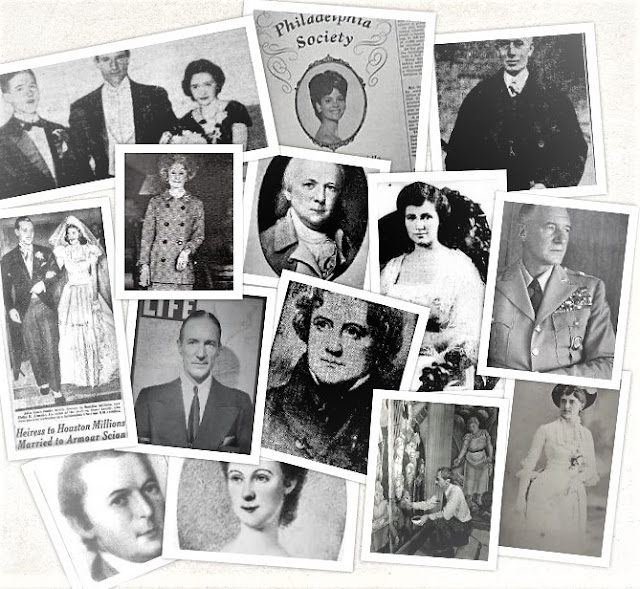 More Biddle Coming Soon!  I will post each link below when published

Posted by Melissa Davenport Berry at 11:30 AM