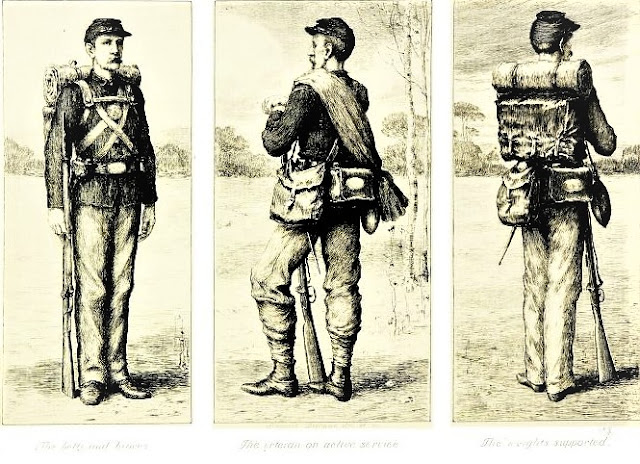 Recommended placement of knapsacks, gear and weapons by Union soldiers to avoid injury and illness--From The Medical and Surgical History of the war of the Rebellion also see Killer Knapsacks by Arthur Bull

Civil War soldiers carried a lot of baggage--an average of fifty pounds. The knapsack, or "Patent Bureau," issued by the government was not designed to support heavy weight. Soldiers suffered severe injuries from the pressure of the strap. However, "necessity is the mother of invention" and one Port family known for their innovative spirit would design an improved version of strapping known as the “Short Patent knapsack.”

Diaries, personal letters, and news clips collaborate just how invaluable these knapsacks were. Short won the support of U. S. Surgeon Brigade General William A. Hammond and Captain Benjamin Collins of the Executive Committee of Commission. Collins noted in a report that he “hoped the government would be induced to place such a knapsack on the back on every National Soldier.” 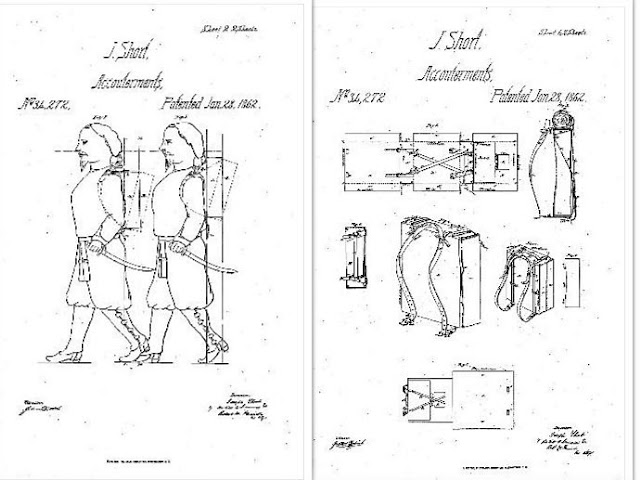 Copy of Patent Image--the knapsack is made of a single piece of cloth or other suitable material, cut in such a shape that the flaps will fold over and form a knapsack. The knapsack is supported by neck and shoulder straps, in such a manner that the knapsack is supported at its bottom and may fall away from the back of the wearer. The position of the knapsack is capable of being changed, so as to relieve the wearer upon a long march. Another entry on Short Patent reads William Edward Newton, of the Office for Patents, 66, Chancery Lane, in the County of Middlesex, Civil Engineer, for an invention for—“Improvements in knapsacks.”—A communication to him from abroad by Joseph Short, of the City of Boston, in the United States of America. Letters Patent sealed.

On May 11, 1863 Joseph Short sent a letter to President Abraham Lincoln along with testimonies. Letter is from Lincoln Papers digital collection 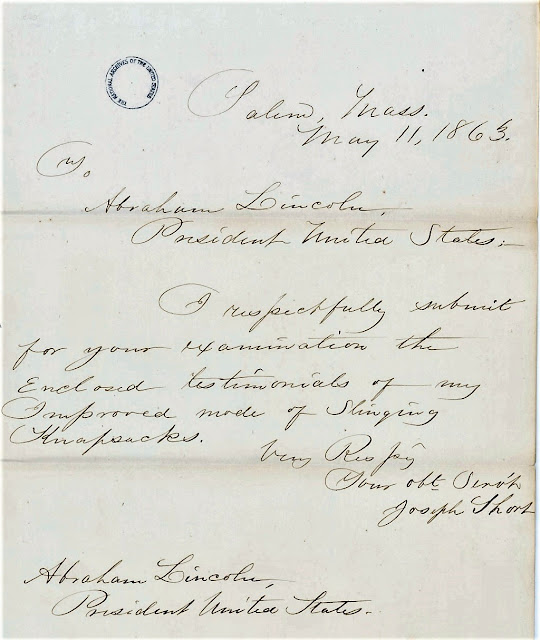 Within a few months, the deal was in the bag! Governor Andrew ordered 14,000 knapsacks to be dispersed in June and another record shows 30,000 more in September. By the following year the Short Patent knapsack was a universal staple for the boys in blue.

According to the Newport Military Museum such correspondence with the state officials and the War Department arising from the endeavor to have this style of knapsack supplied by the Government was rather unique, but the Shorts were just as innovative when it came to marketing their product.
Below are testimonies from soldiers, surgeons, and commanding officers which Joseph Short included in his letter to President Lincoln. Charles ran promotional ads with locations at No 7 Lewis Wharf in Boston, MA and 22 High Street in Salem, MA. Several firms were contracted to represent the Short Patent knapsack and there were private cooperate investors from New York and Philadelphia which Joseph brought in to finance his business. (Following the Article Are Photos of the Knapsacks from Museums and Private Collections)

An entry on March 28 at Camp Meredith reads: “Gloomy spirits were lifted by the arrival of the Paymaster. The boys under General Long Sol (Solemn Meredith AKA "Long Sol" for his towering 6' 7" body) had previously voted to purchase Short Patent Knapsacks demonstrated by a visiting salesman for two dollars each,” and “some 200 men plunked down their money and paid off their bill in full.”

Colonel John P Reynolds of the Salem Light Infantry kept a very detailed diary. In May of 1862 he noted Joseph Short passed through his camp. reads: “Mr. Short had just manufactured a new knapsack that is justly celebrated for its many improvements from all others...for its versatility as it can easily be easily and conveniently carried as a hand valise.”

Captain Jacob Lombard of Company C was presented with Short knapsacks from Johnson Burrage representing the firm of J.M. Beebe & Richardson Co. of Boston. He noted: “The strapping is so adjustable to the shoulder allowing a much better ease than that of the governments.” He confirmed that all regiment commanders will want to supply the knapsack. The price agreed upon was “2.50 per man.” 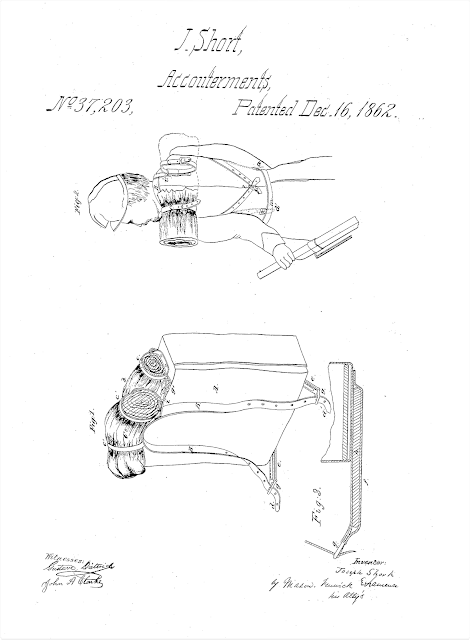 The Massachusetts 55th Infantry under the command of Captain Thomas Foulds Ellsworth, a cousin to Joseph Short was furnished with the knapsacks and “not man one fell from the ranks after a long march.” Salem Gazette

In October, 1864, George Wingate, historian of the Twenty-Second Regiment of the National Guard of New York noted that the regiment adopted Short's patent knapsack “was the only comfortable knapsack ever carried.”

Addison A Center, a young chap from Wenham, Massachusetts  wrote to Short from Virginia. Center was a drummer boy for the 40th Massachusetts Co K and received a knapsack for Christmas. “The old knapsack was too heavy and hurt me so, but I marched here from Miner’s Hill and found my new knapsack to be easy. I only wish it was a little smaller—do you make any smaller ones for drummer boys?” Tragically, Center died of fever a year later, he was 17 years old. 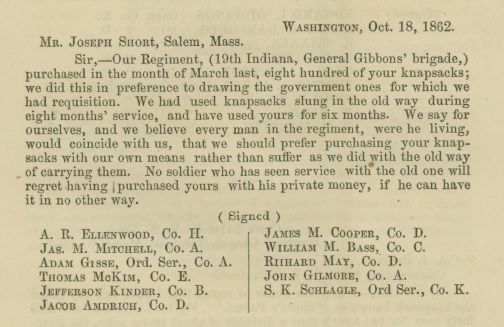 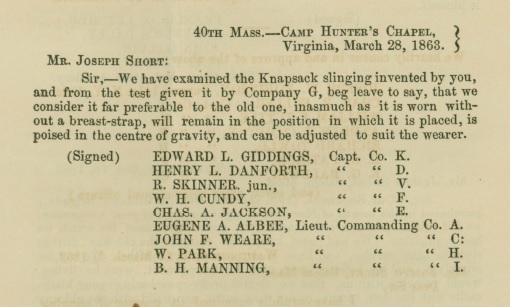 The Short Patent knapsack was displayed through the country and at the Paris Exposition in 1867. Many knapsacks remain in private collections and in museums. There is one that recently went to auction owned by Captain William R Black, a carpenter from Taunton, Massachusetts.
William Rufus Black a 31 year old carpenter from Taunton, MA enlisted as a private on 4/22/1861 into co. G. Promoted to Lt. 8/27/1862. A few months later on 12/15/1862 he was promoted to Capt. in Co. F. Black was mustered out on 8/28/1863 at Camp Hooker, Lakeville, MA. The 4th Mass. was a nine month unit that saw action in Louisiana, participating in the siege of Port Hudson. After the war Black was a member of GAR Post #3 in Taunton, MA where he died 8/29/1915. He was also a Massachusetts State Representative
Today companies are reproducing the Short Patent knapsack which retail around $200. Bryan Okeefe of Salem purchase one from Nick Sekela of Butler, NJ. Okeeke asserts that Sekela “has managed to create an outstanding rendition of one of Short’s finest pieces; proving once again that no reproduction is beyond reach.” 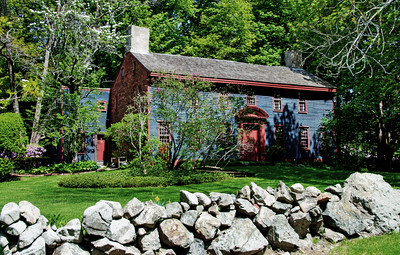 The Short line in can be traced back to ancestor Henry Short, one of the first families who settled Newbury, Massachusetts. Above image is of The Knight-Short House, seat of the early Short family in Newbury, Massachusetts photographed by Wayne Marshall.  Among the many notorious ancestors whom Charles and Joseph descend is Moses Short, a revolutionary war soldier who served under Captain Silas Adams and Colonel Jonathan Titcomb. 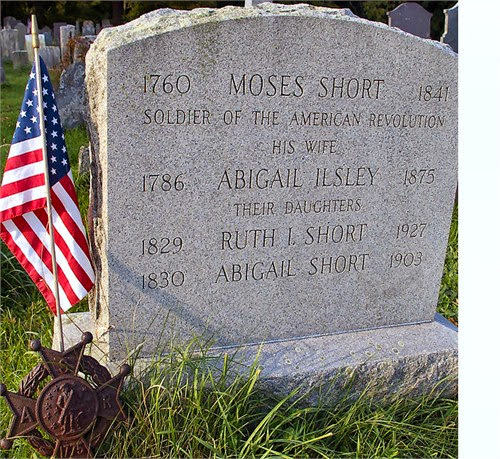 The day ledgers of the Short cabinetmakers are housed at Peabody Essex Museum. Joseph Short produced a variety of fine mahogany furniture that survives today and his pieces are identified by his label, which reads "Warrented Cabinet Work of all kinds, Made and Sold by Joseph Short, At his Shop Merrimack Street, between Market- Square and Brown's Wharf, Newburyport.” 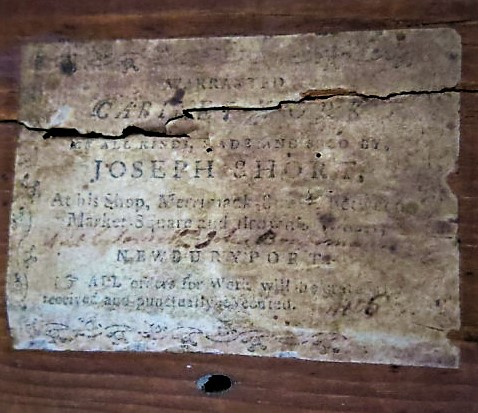 Two folders at Winterthur Museum, Garden, and Library contain photographs and information sheets on the documented pieces made by the Short cabinetmakers.

Joseph's sons took on the trade of cabinetmaking. The youngest, Joseph Short JR., was was a skilled master mechanic. He served as an assistant for Jacob Perkins in England for making the plate for bank bills.

One June 16 1817 Charles Sort married Rebecca George of Newburyport and moved to Haverhill shortly after to expand the family cabinetmaking business. After a devastating fire in 1827 Charles removed to Salem and the census and city directories have the family listed at 22 High Street. It appears from the records that his son Joseph worked closely with his father and were making tents, belts, and jackets as well. There are also patents listed for door fences, washing machine by Charles Short in Salem, Massachusetts dated April 1862.

Joseph also owned a dry goods business with Franklin Lummis listed in business directory and ad from Salem newspaper below. 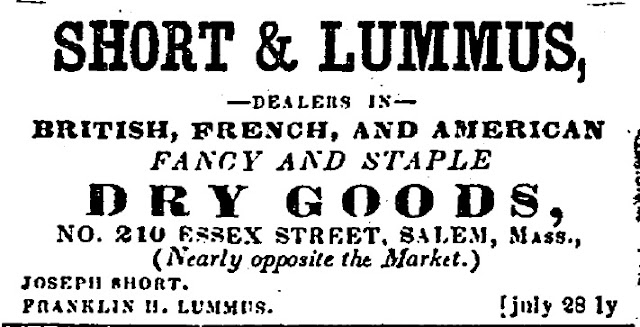 Charles Short and his wife Rebecca had eleven children. Almost all the children attended West Bradford Academy in Haverhill, Massachusetts. Benjamin Greenleaf was the principal and mentored Charles Short, JR. who went on to Phillips Andover Academy and Harvard.  He earned a chair at Columbia University and was known as one of the finest classical scholars in the country.


After 1869 very little is on record about knapsack maker Joseph Short. Fortunately, Ronald Guilmette of Salisbury, who is currently writing a book on Civil War veterans that served as Massachusetts State Police constables was able to locate records on Joseph. He died in Guayaguil, Ecuador, South America of yellow fever February 7, 1869. A 1865 Census Joseph living in Salem with his wife Jeannette (age 28) and their son Willie age 7 Occupation listed as “Mass Knapsack." In the 1870 Census Jeanette (widowed) and Willie were living in Montgomery County, Lower Merion, Pennsylvania, with her parents Jacob and Hannah Stadelman. 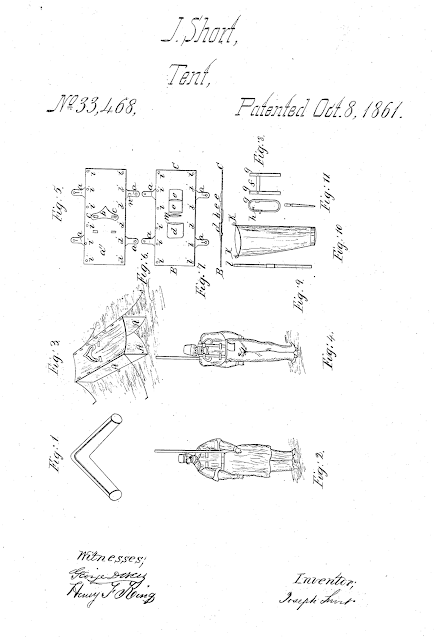 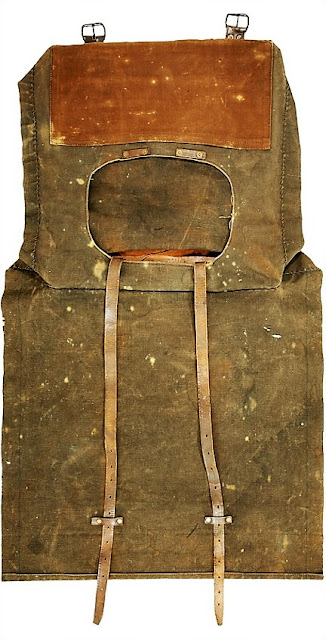 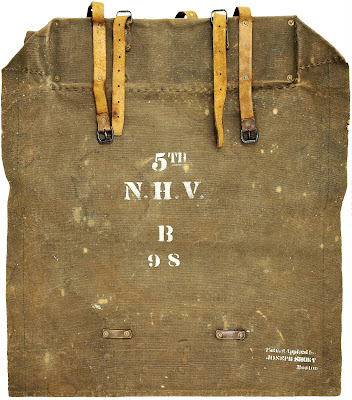 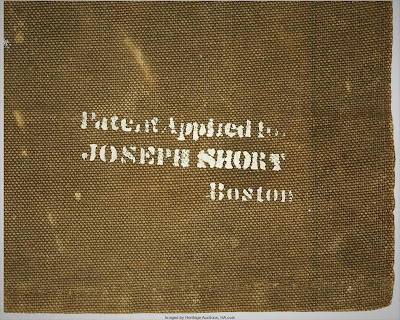 Labeled Joseph Short patent knapsack is constructed from heavy dyed canvas with no other glazing or finish. The overall condition is sound and all straps appear to be in place except for the wide shoulder straps. The pack is basically a deep brown color and has some minor spotting and fraying but is otherwise fine and flexible. On the exterior of the wide 19" x 21" flap is clearly stenciled "5th/ N.H.V./ B/ 98" in 1" tall white letters. Also stenciled in white on the lower outside corner is "Patent Applied For/JOSEPH SHORT/Boston." The interior has one large compartment in the rear and an additional smaller pocket below. Short received his patent for a knapsack harness system in December, 1862 so this specimen would have been manufactured previous to that. The 5th New Hampshire was formed in August, 1861 and served with distinction in the Army of the Potomac, having six color bearers shot down at Fredericksburg and losing its colonel while fiercely engaged at Gettysburg. In all, the unit participated in more than two dozen battles and lost nearly 300 men killed during its three-year term of service. A striking and very rare knapsack from one of the Union's most notable regiments.This knapsack was referenced in and was advertised in Heritage Auctions November 2008

Reference for the above knapsack is also noted in a testimony below from William Berry included in the letter to President Lincoln from Joseph Short. 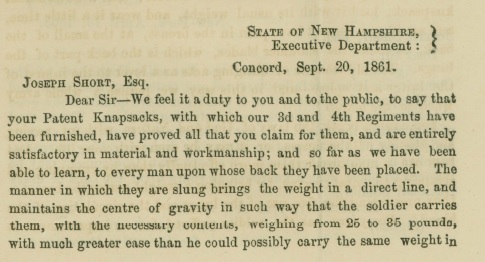 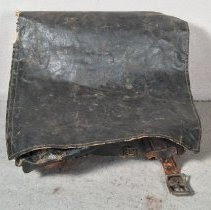 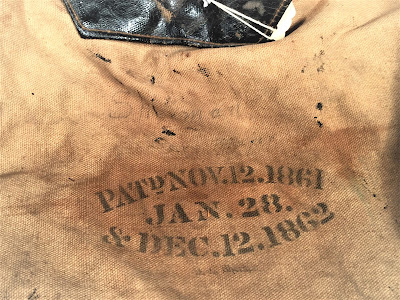 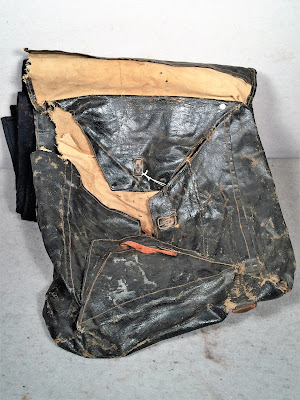 Photos Courtesy of Arizona Historical Society, Laraine Daily Jones, Museum Collections ManagerLabeled Knapsack patterned by Joseph Short, of Boston, MA. Made of natural color cotton canvas cloth, with a black, rubberized finish on the outer side, has a full-length outer flap, concealing a deep inner pocket and an envelope style interior. It has four large leather straps, two each at top and bottom, & four metal roller buckles. Interior is four-flapped construction, each flap in the shape of a tuncated pyramid. 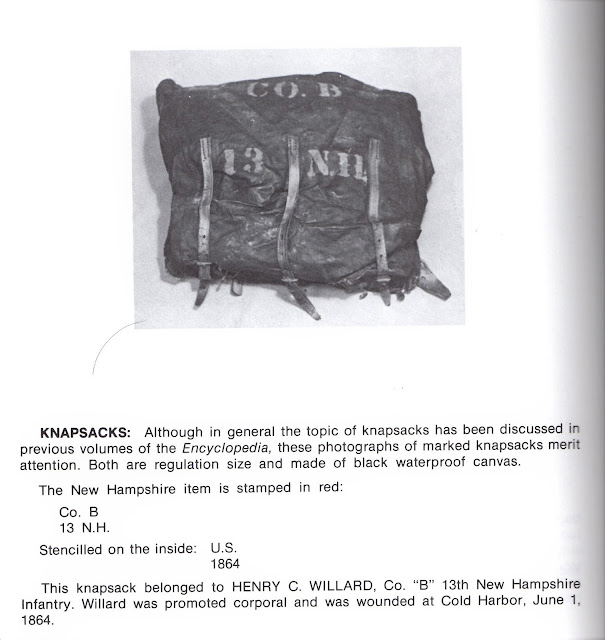 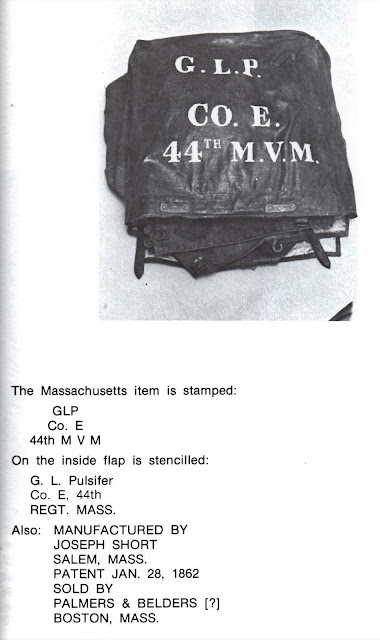 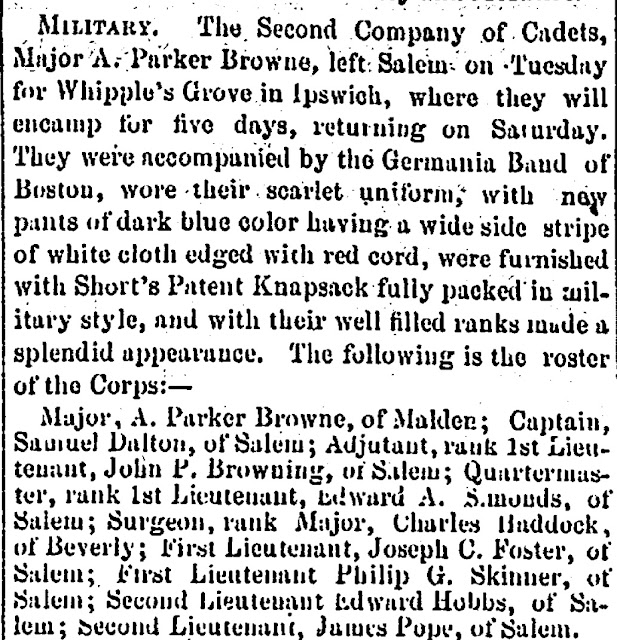 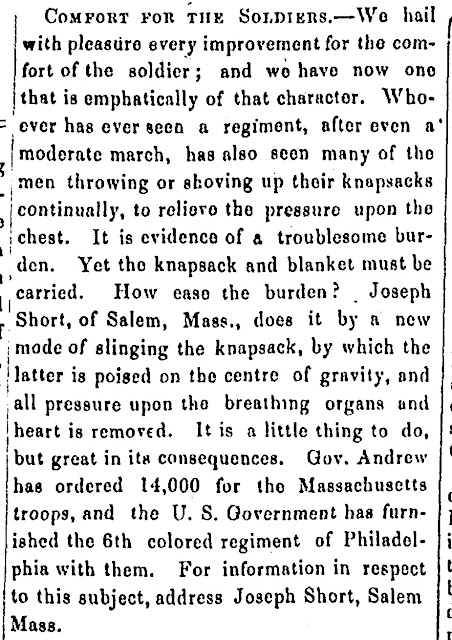 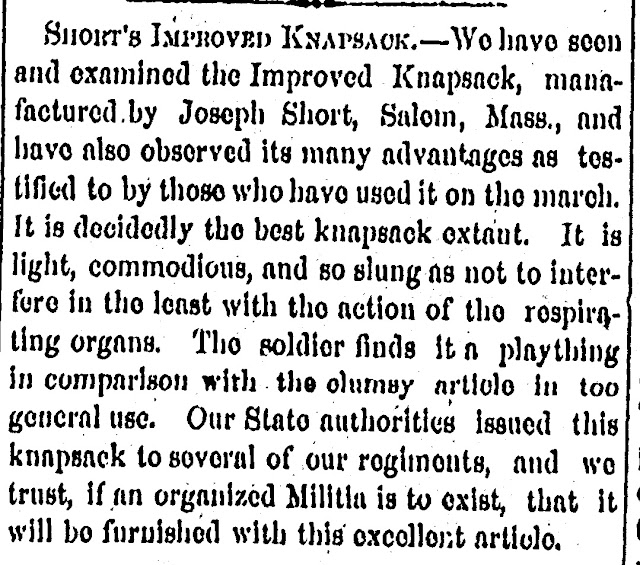 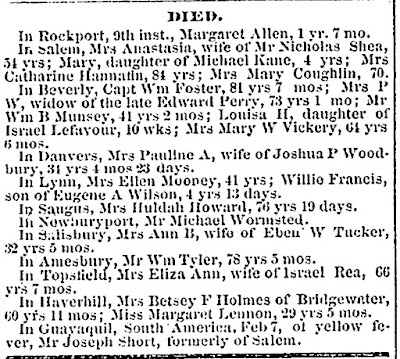 Martha G. Fales, "The Shorts, Newburyport Cabinetmakers," Essex Institute Historical Collections (July 1966)
"In her hour of sore distress and peril": The Civil War Diaries of John P. Reynolds, Eighth Massachusetts Volunteer Infantry John P Reynolds 2013
History and Complete Roster of the Massachusetts Regiments, Minute Men of '61 who Responded to the First Call of President Abraham Lincoln, April 15, 1861, to Defend the Flag and Constitution of the United States and Biographical Sketches of Minute Men of Massachusetts George Warren Nason 1910
Short's Patent Knapsack Esty.COM
American military equipage, 1851-1872: a description by word and picture of what the American soldier, sailor, and marine of these years wore and carried, with emphasis on the American Civil War. Frederick B Todd 1980
In the Country of the Enemy: The Civil War Reports of a Massachusetts Corporal Zenas T. Haines 1999
Our War: Days and Events in the Fight for the Union Mike Pride Blog of Book
Chronological and Descriptive Index of Patents Applied for and Patents Granted, Containing the Abridgements of Provisional and Complete Specifications publications 1861, 1862, 1863
History of the Twenty-second Regiment of the National Guard of the State of New York: From Its Organization to 1895, Volume 22, Part 4 George Wood Wingate  1896
On Many a Bloody Field: Four Years in the Iron Brigade. Alan & Maureen Gaff, Alan D. Gaff
House Documents Volume 10 and Volume 184
Salem Observer "Short's Knapsack July 1863