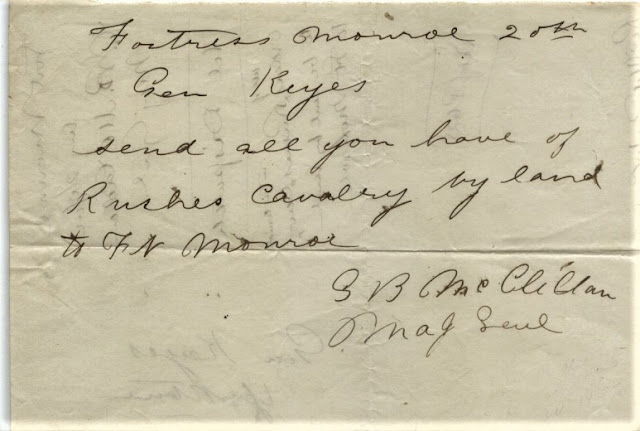 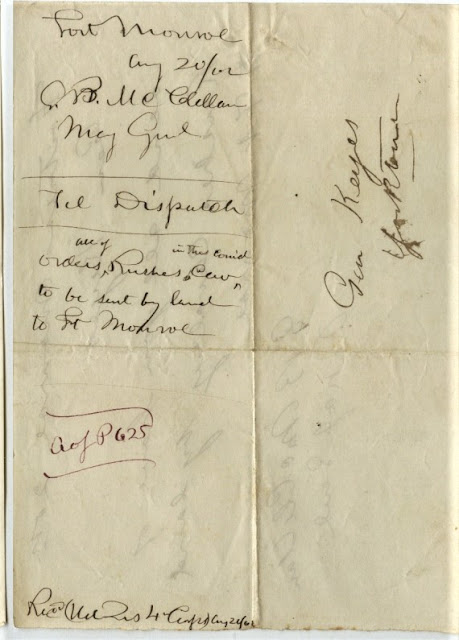 This interesting telegraph dispatch sent by Major General George B. McClellan, commanding the Union forces during the Peninsula Campaign of 1862. This order was issued as the campaign had almost ended, in a humiliating Union defeat, as the aggressive Robert E. Lee emerged, and beat back the numerically superior but tactically timid McClellan. The order directs Major General Erasmus Keyes, who had earlier in the day been ordered to hold at Yorktown, to "send all you have of Rushes (sic) Cavalry by land to Ft. Monroe" at the base of the Peninsula. The cavalry in question was the 6th Regiment of Cavalry (70th PA Volunteers), the so-called "Rush's Lancers." Docketed on the reverse as a telegraph dispatch, with a content summary. A terrific, and very scarce, Civil War item. Wartime field orders of any sort are very hard to come by, as most were not retained. From Heritage Collectors Society

Posted by Melissa Davenport Berry at 9:24 AM No comments:

California railroad magnate Mark Hopkins died in 1878 without a will or designated heir – and the huge fortune he left behind was under siege for more than a century by scammers claiming a connection to the man, and therefore his money. Read more of my story at GenealogyBank W. R. Moss’ Hoax: A Scam for the Hopkins Fortune
Posted by Melissa Davenport Berry at 8:10 AM No comments: 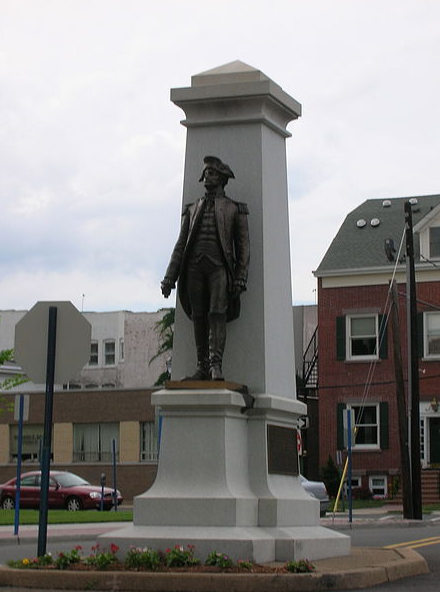 Brigadier General Enoch Poor/Poore (1736-1780), born in Andover, Massachusetts, to Thomas Poor/Poore (1704-1779) and Mary Adams (1707-1789), married Martha Osgood (1747-1830), daughter of Colonel John Osgood (1712-1775) and Martha Carleton (1722-1755). Photo: The statue and monument erected in honor of Enoch Poor, a brigadier general during the American Revolutionary War. This statue is located between the Hackensack Courthouse and Poor’s final resting place, the old burial grounds of the First Reformed Church in Hackensack, New Jersey
To read my blog on GenealogyBank click link Stories from the Life and Death of Revolutionary War Hero Enoch Poor
Posted by Melissa Davenport Berry at 7:23 AM No comments: 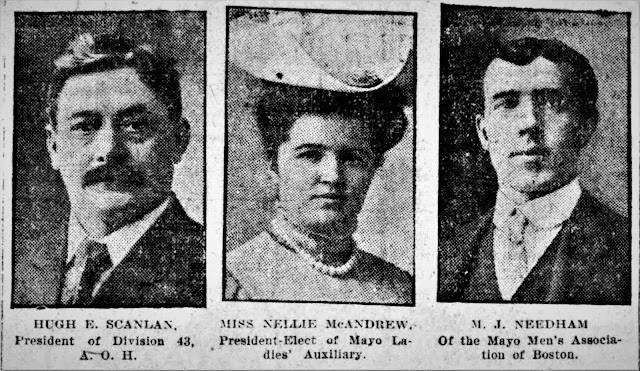 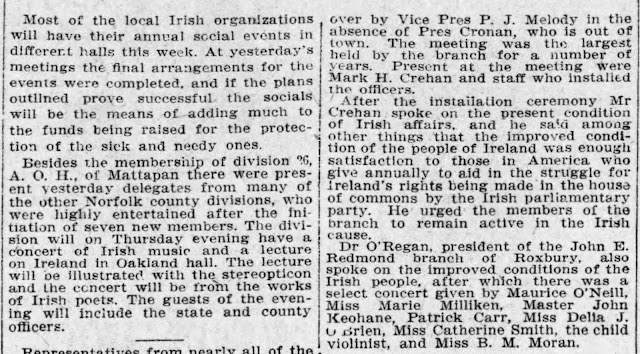 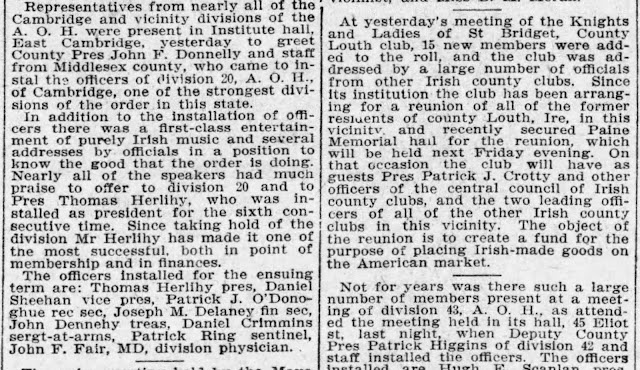 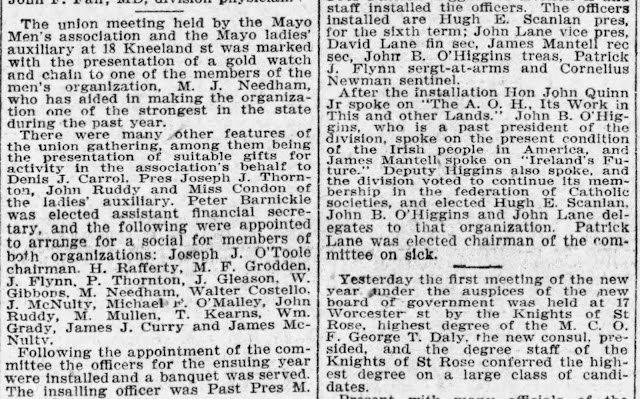 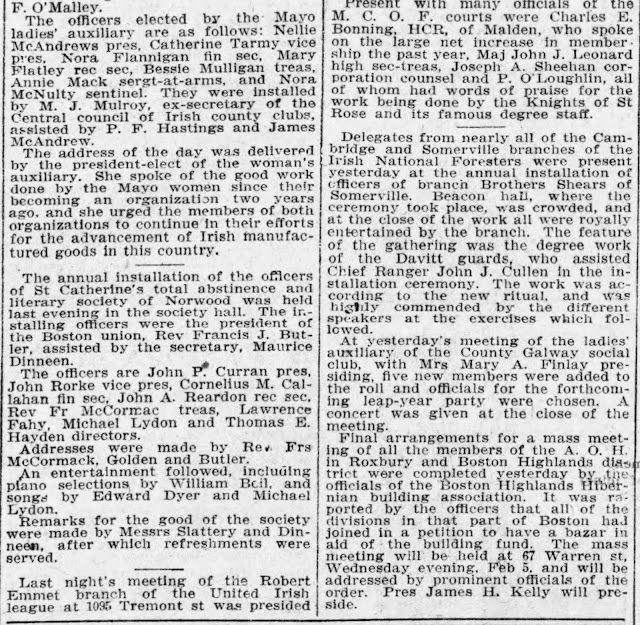 From The Boston Globe January 27 1908
Posted by Melissa Davenport Berry at 5:39 AM No comments:

Interview with a 19th-century Kennebunk shipbuilder 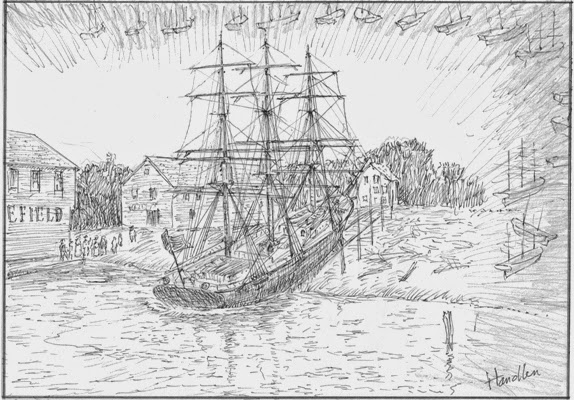 
A familiar event at Littlefield’s Yard

Email Sharon Cummins
Most of the ships launched on the Kennebunk River before 1840 were built at the Landing. By the time the river locks were constructed in 1849, Clement Littlefield, in company with George Emmons, had already built some of the largest vessels launched on the river. See Kennebunkport
Mr. Littlefield was making hay in a grass plot on Chase Hill Road, adjoining his home in 1887 ,when correspondent Jules Righter of the Biddeford Journal made his acquaintance. The reporter was hoping to learn about the early days in Littlefield’s shipyard.
“I came here when I was 16-years-old and went to work, learning my trade, at the Landing up there,” the retired shipbuilder said, pointing upriver. “When I was 21 years old I had acquired sufficient proficiency in my trade so that I was made foreman of the yard, where I was at the time. Shortly after that I bought this field down here and had a shipyard of my own. This was a splendid place, you see. We could haul our lumber over to this high ground and then chuck it right down over the bank to the craft we happened to be working on. Out there down by the railroad track, and up here on the bank, where you see that stone, I had a steam mill where we used to cut all of our lumber.”
“How did you get your lumber?” asked the correspondent.
“Our big sticks came in from the country. Many a time have I seen the road blocked with teams loaded with lumber. There used to be a great deal of rivalry between the different teams. Our planking and light timber used to come in from the South — Southern Pine and the like. It came by ship. We would unload the timber right into the water and then duck it so that it wouldn’t be carried away by the tide. You can see some of the dock piles down there to the right of the coal shed now,” Littlefield responded.
The reporter then inquired about the workmen hired by the various yards, asking, “You used to employ more men down here than at the Landing, didn’t you?”
“Oh yes;” was his response. “Up there we only had about 20 men at work on a vessel at a time. Down here we used to employ over 100. Sometimes we built two or three vessels at a time.”
When asked about the consumption of rum by his employees, Littlefield replied, “Up to the time when I came down here rum was a common thing for the men to have in their chests. But after I had been here at this yard for a few years, the temperance movement started and from that time on we didn’t have it.”
The Emmons & Littlefield Yard began operations in the early 1840s. Shipbuilders David and Abner Clark and George Christenson all learned their trade under the tutelage of Clement Littlefield before opening shipyards of their own. The year 1856 was a tough one for area shipbuilders. D&S Ward in Kennebunkport folded on Oct. 21, 1856, and the Emmons & Littlefield Yard was assigned the following day. Landing shipbuilder Nathaniel Lord Thompson, who had contracted the yard to build ships for him since 1854, purchased what was left of the failed business in 1858 and sold part of the property to the Clark brothers.
As master carpenter, Clement Littlefield built ships for N.L. Thompson and for his son-in-law David Clark for many years after selling his business. He also took on construction work around the Kennebunks.
Andrew Walker wrote about one such project in his 1882 diary.  Photos of Maine Teresa Chrzanowski Flisiuk 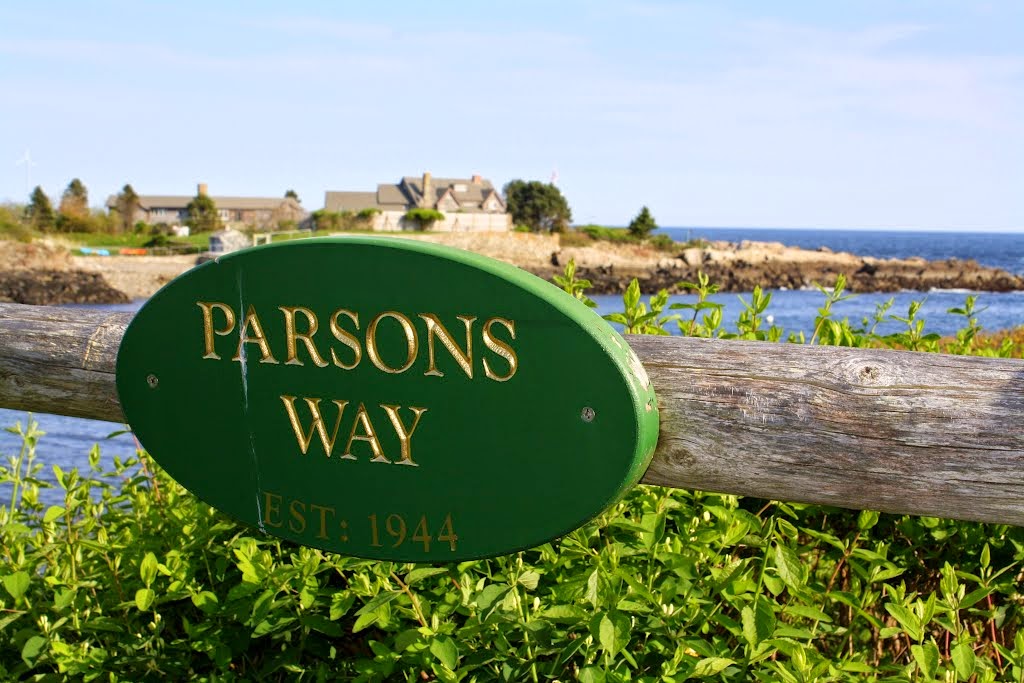 “During the past summer Charles Parsons has had a wharf 119 feet in length by 40 feet in width built at the head or mouth of the Mousam River, but a short distance from his sea-side cottage. The wharf was built by Clement Littlefield in 23 working days. In its erection he drove 75 piles and then planked it on the inside and filled in solid with about 4,000 loads of rock and earth. The beach in this vicinity was formerly called Hart’s Beach. Mr. Parsons has recently renamed it Parsons Beach and the new wharf, Parsons Wharf. Mr. Parsons thinks the wharf may be used as a landing for vessels laden with coal and as a shipping place, to which farmers may haul wood and lumber which they wish to send to other places.”
Clement Littlefield and his wife, Mary Thompson, raised an extended, multi-generational shipbuilding family at their home in Lower Village and occasionally housed employees of the Emmons & Littlefield Shipyard. According to a new sign at the corner of Chase Hill Road and Western Avenue, that home is soon to become “The Shops at the Grand.” No assurances can be offered by the developer that any of the original structure will survive the renovations as the building is in pretty rough shape. Its historical significance should be acknowledged before the circa 1808 house becomes a memory. 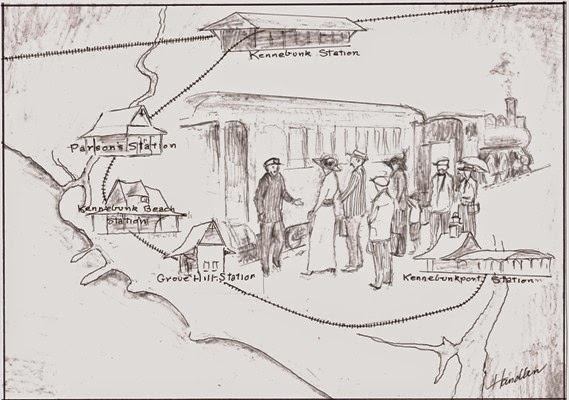 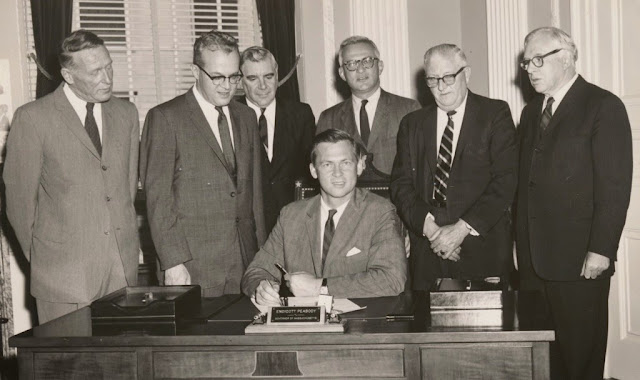 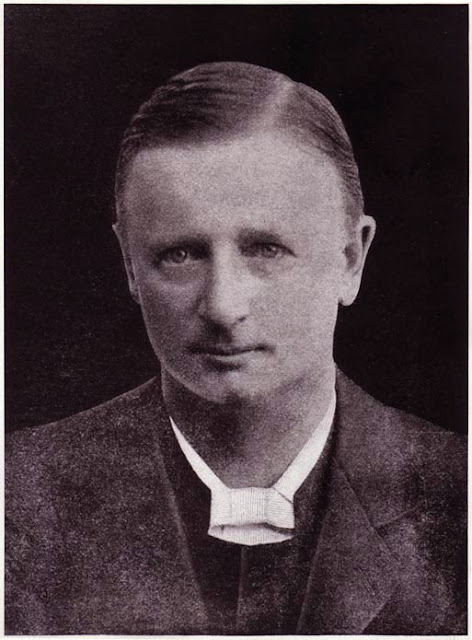 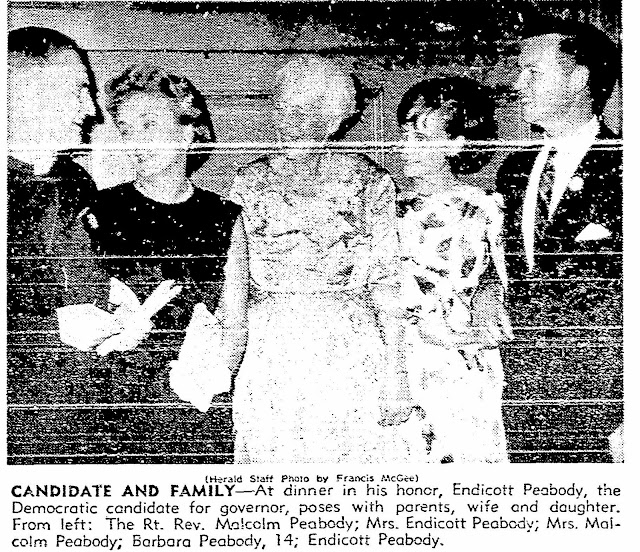 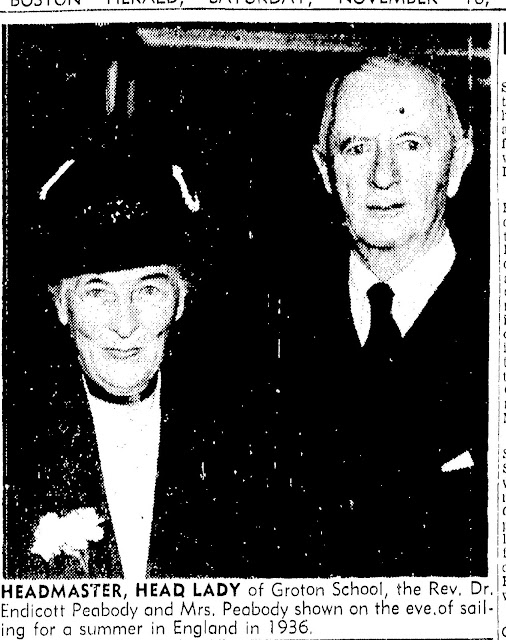 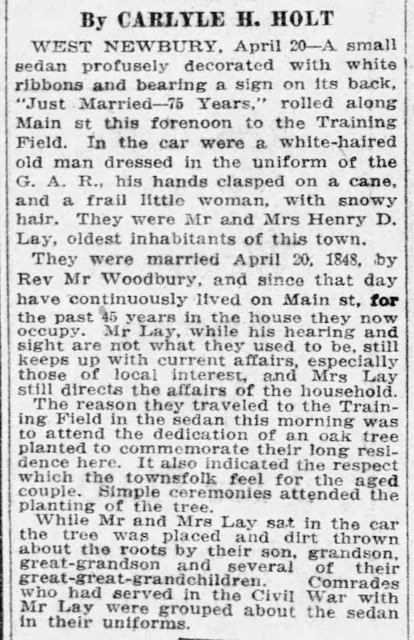 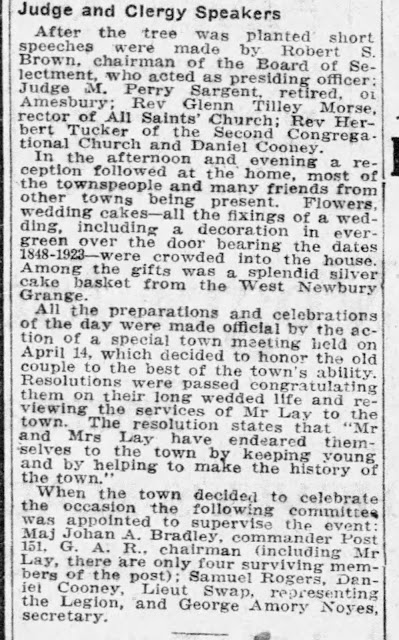 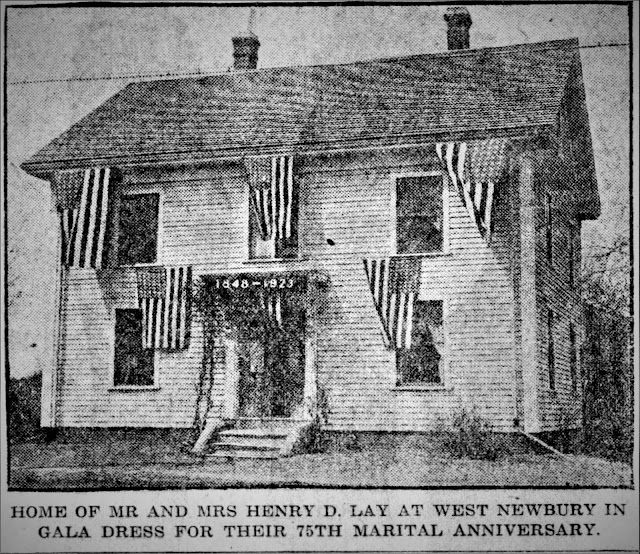 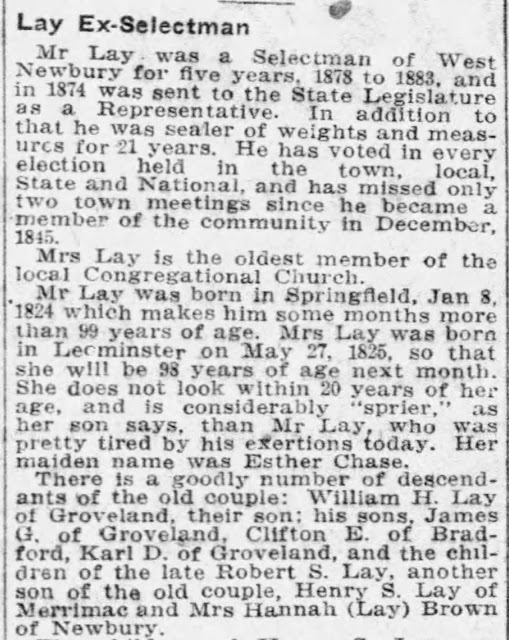 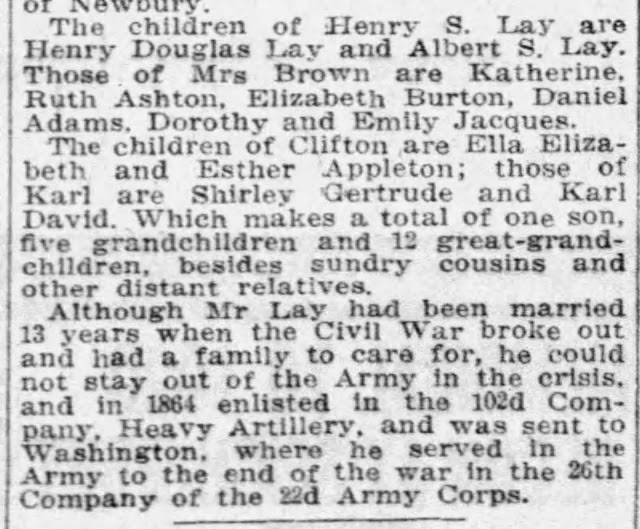