The British are coming! Or not

My article in Newburyport News 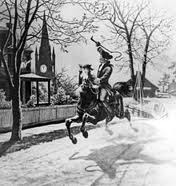 The celebration of our independence is fast approaching, and while we all know the story of the infamous dispatcher Paul Revere and his midnight ride to warn Adams and Hancock that the Brits were coming, many are unaware that Newburyport had a Revere as well. Ebenezer Todd made tracks through the dusty trails and back roads of Newbury to “warn and save” just like Revere, only in his case, it was a false alarm. This wicked tall Tory tale from the archives lasted only a night, but managed to ignite a sizzling terror in the Port and, for you present natives, a cool chronicle tidbit for a hot season.

John Greenleaf Whittier called the event the “Great Ipswich Fright” because the whole debacle originated when a rumor starting circulating that British “regulars” had landed on Ipswich shores to execute a large-scale invasion to free prisoners jailed there. This mishap created quite a commotion, and like “most news, it spread like wild fire, being generally credited, and the consternation became almost universal” (Coffin, History of Newbury).
On Friday April 21, 1775, Todd, by order of “officials” from Rowley, broke up a community meeting hosted by Parson Carey, who was just about to give his opening prayer to comfort his flock and bring news of the fighting at Lexington. Todd approached the meetinghouse with “hurried hoof-beats” and stormed through the doors with “loosed haired and painting for breath,” shouting:
"For God's sake, turn out! turn out! or you will all be killed!
The regulars are marching this way, and will soon be here.
They are now at Ipswich cutting and slashing all before them…
By this time, they are at Old Town Bridge."
According to Currier (History of Newburyport), “all sorts of ludicrous things were done by men and women to escape impending destruction.” Crazed and frightened town folk scurried like mice from a hungry wild cat. Vehicles and carriages flooded the streets, and many headed for safer terrain on foot as well. Additional Revere wannabes added to the panic, screaming, "Flee for your lives! Flee for your lives! The regulars are coming!" 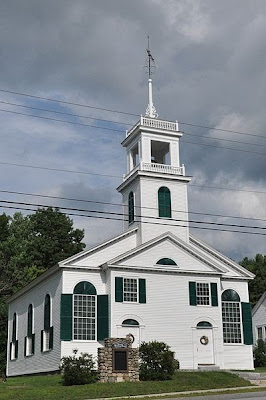 One man hid private documents under a large stone in his field and battened down the hatches with musket in hand, “resolved to sell his life as dearly as possible” (Coffin). Another woman threw all her precious silver in the well, but her fresh, hot pies were another matter – no rebel would get a taste of her tarts. There is also a report of one confused woman who ran five miles before making a pit stop on the steps of Reverend Noble's meetinghouse to nurse her infant, only to discover she grabbed the cat instead.
In many cases, the able-bodied left those who were bed ridden or elderly to fend for themselves. One feisty fellow, “whose excessive corpulence rendered retreat on his part impossible, seated himself in his doorway with his loaded king's arm” and mustered his neighbors to "stop and shoot the devils" (Coffin). 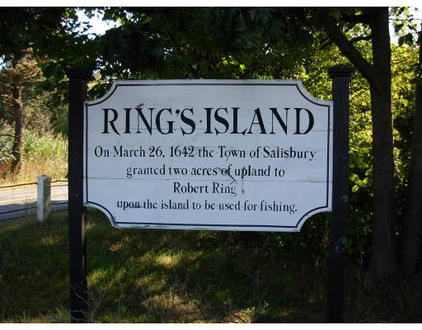 Several headed for safety by boat to Salisbury. One man, while escaping to Ring’s Island, almost sacrificed his little tyke when anxiety reached a critical point, shouting to his wife, "Do throw that squalling brat overboard, or we shall be all discovered and killed!"
As the tale grew more gruesome, the great panic eventually spread as far as Haverhill and into New Hampshire. “Almost simultaneously, the people of Beverly were smitten with the same terror. It was then believed that the enemy had fallen upon Ipswich and massacred the inhabitants, without regard to age or sex” (Salem Gazette). At one point, the destruction of the Parker and Thorla bridges was proposed, but thankfully, a handful of concerned citizens decided that it would be wise to validate the claim before repeating it. They soon discovered it had no credence.
Finally, Eliphalet Hale of Exeter rode from Ipswich to Newbury in fifty minutes. He let all who came in his tracks know that it was a hoax. The following day, Benjamin Greenleaf addressed the false accounts in a letter to the Committee of Safety in Boston, asking them to call off the troops. Even so, the fear of invasion by sea was real, and for the next few months, all who endured this great fright took extra precautions.
John Jenks of Salem reported in his journal that despite the false alarm, he “moved [his] goods up to Uncle Preston’s in Danvers and a great number of teams were employed to carry provisions out of town.” Ipswich ordered “a guard of two men [to be] stationed by the Town on the Hill in May 1775. A flagstaff was erected, and a beacon, and in case of the appearance of the enemy, a flag was to be displayed by day and a fire, built of tar and other inflammable material to be kindled by night” (Ipswich Chronicle).
Although the phrase “don’t shoot the messenger” was the law of the land, many felt that this bearer of bad tidings should be the exception, but since Ebenezer Todd acted as any good Patriot would have, he was pardoned. Whittier commended the citizens of Newburyport for their courage despite the sham, noting that “they might bow and sway like reeds in the wind; but they stood up like the oaks of their own forests beneath the thunder and the hail of actual calamity.”
Good People of the Port - Have a Happy 4th of July!
Posted by Melissa Davenport Berry at 4:26 PM