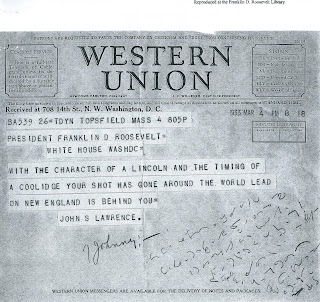 Many residents of Topsfield know John Silsbee Lawrence’s house (located at 76 Campmeeting Road) but they don’t know who he was.  In fact, recently the Village Reporter had reported in an October 22 article that he was in the leather business, when actually it was cotton and textile.  Although his vast wealth made him an intriguing man, it was his “famous friends” that made him even more interesting.
John was born in Nahant in 1878 and first appeared in Topsfield in 1905 when he began buying land from several people- Wellington Donaldson, Adeline J. Perkins, Arthur F. Perkins, Mary T. Robinson, David S. Clarke and Margaret Y. Averill.  After his marriage to Emma Atherton in 1907, he began building his Topsfield summer house known as “Gravelly Brook Farm” in 1908.
John Lawrence was born into a very wealthy and privileged family.  In fact his great grandfather, Amos Lawrence was at one time one of the wealthiest men in America and a great philanthropist.  The family business called Lawrence and Co., was a cotton and textile business, a business John was a partner in.
In 1894, while attending Groton Academy (later changed to Lawrence Academy- after John’s Grandfather) he met a very important and life long friend, Franklin Delano Roosevelt (F.D.R.).  Letters that they wrote to each other over the years are available at the F.D.R. Presidential Library and Museum in Hyde Park New York.  The letters reveal a dear old friendship, their sense of humor, a shared passion for boating and of course politics.
During WWI, John was an aide of Herbert Hoover in food and relief work.  Here is part of a letter written May 1, 1923, from John S. Lawrence to Franklin Delano Roosevelt- “I heard of you in Washington.  Hoover said he had had a nice talk with you, admired your courage and method of thought, although he said he didn’t always thoroughly agree with you.”
On March 4, 1933 John sent a telegram to F.D.R. that read, “With the Character of a Lincoln and the timing of a Coolidge your shot has gone around the world lead on New England is behind you,” John S. Lawrence.
What is so remarkable about this telegram is the date it was sent, Saturday, March 4, 1933.  This was the day of F.D.R.’s inaugural speech that contained his famous quote, “So, first of all, let me assert my firm belief that the only thing we have to fear is fear itself.”
Besides politics they had a shared passion for boats.  That is probably why in 1923 they purchased a houseboat together called the Larooco, for Lawrence-Roosevelt Company.  F.D.R. used it mostly during the winter months to help with his poliomyelitis (polio).  Then in September of 1926 it was destroyed by a hurricane, although from the letters that were left it was evident that they both were ready to sell.
The letters that pertained to the Larooco, were made into a book written by Donald S. Carmichael: An introduction to the log of the Larooco: being chiefly the correspondence of Franklin D. Roosevelt and John S. Lawrence.  This rare book, of mostly correspondence letters between the two friends, can only be viewed at a few libraries such as the F.D.R. Presidential Library and Harvard.  Both F.D.R. and John were graduates from Harvard, John in 1901 and F.D.R. in 1904.
John had a few other famous friends.  In 1924 he entertained the Prince of Wales at his Topsfield home.  Author, Joseph Garland, wrote about this visit in his book The North Shore.
In 1937, his wife Emma Atherton passed away and in 1940 he married Helene Kellogg.
Then, in 1942, John Lawrence sold “Gravelly Brook Farm” to the Pym family and moved to Manchester, Massachusetts.
The Lawrence Home Today
Since 1979, the Lawrence home has been owned by Jonathan and Norma Peabody.  In September of this year, they celebrated the 100th anniversary of their home with a party.  Over 70 guests came to the event, including Jonathan’s 100 year old father Lester Peabody.  They enjoyed a written history of the home as well as a visual one.  They displayed interior and exterior photos of how the home looked when Lawrence owned it (photos that are in the custody of Historic New England).  The Peabody’s explained that part of their home, the north and south wings, are now gone.  The south wing had a ballroom, master bedroom suite and sun room.  Norma said, “John’s granddaughter told us that John took down the ballroom.”

The Peabody’s maintain that the ballroom was actually part of the original plan.  Another part of the house that is missing is an entire north wing that had 7 bedrooms and 7 baths.  This part of the home was destroyed by a fire, after the Lawrence’s sold it to the Pym’s.
The work that the Peabody’s have done over the past 30 years is quite evident.  Their home has been meticulously maintained both inside and out, something John Silsbee Lawrence would be proud of.

Although Topsfield only knew him for 34 years, his mark in history will be felt for many years to come. 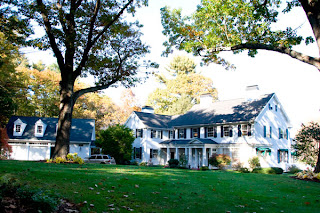 Also see several photos of inside home at this link Historic New England
Posted by Melissa Davenport Berry at 9:03 AM