A Share from Mathew Crowther, aka "Shortshanks" from his blog http://printshopwindow.blogspot.com/
And check out his newest http://theprintshopwindow.wordpress.com/

I think the best satire always contains an element of universality which transcends the specific time and place of its creation and speaks to modern audiences just as powerfully as it did to previous generations. That is one of the things I really like about this unassuming print which was published by S.W. Fores on 9th August 1817. 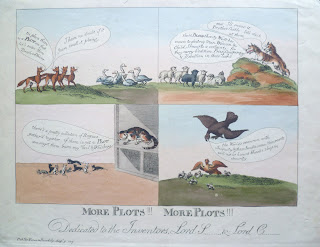 It shows four small scenes of small animals being stalked by various predators who attempt to justify their actions in the speech bubbles provided. In the top left-hand corner, as pack of foxes approach a gaggle of unsuspecting geese, one fox says “Tis plain there is a PLOT on foot, let’s seize them Brother Oliver” and his hunting companion replies “I have no doubt of it. I can smell it plainly”. To the right two vicious-looking wolves approach grazing sheep, one says; “Those bloodthirsty wretches mean to destroy man, woman and child. I know it to a certainty for they carry sedition, privy conspiracy and rebellion in their looks”. His mate responds by adding “and I’ll swear it Brother Castle let’s dash at them”.  At the bottom left of the print a cat watches a group of mice and muses “there’s a pretty collection of rouges gather’d together, if there is not a PLOT amongst them burn my tail and whiskers”. Finally, the image at the lower right-hand corner shows a bird of prey swopping down on a terrified mother hen and her chicks with a speech bubble that reads “the worlds overrun with iniquity and these troublesome miscreants will not let honest Hawks sleep in security”.
Specifically the print is an attack upon the heavy-handed and repressive policies which the British government implemented to stifle popular demands for political and economic reform in the years immediately following the Napoleonic Wars. In the summer of 1817 the government suspended habeas corpus and outlawed political assemblies on the basis of secret evidence gathered by a network of government spies which, it was alleged, proved that British radicals were plotting an armed insurrection. Two of these spies, John Castles*and William Oliver, are referred to by name in the print, as they became hugely unpopular once it transpired that they had provoked radicals into taking actions for which they were subsequently charged and in some cases executed.
Generally though I think the message behind this print could still apply to many authoritarian or conservative regimes around the world today. 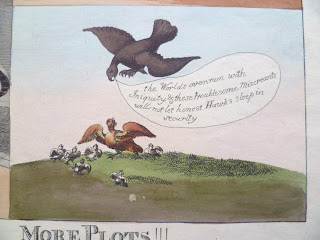 * In fact John Castles was a pseudonym used in government papers to refer to the informers Ronald Payne and John Garrod who attempted to convict the radical James Watson following the Spa Field Riots in 1816.
Further reading;
http://www.historytoday.com/susan-hibbins/pentrich-rebellion
Posted by Melissa Davenport Berry at 12:50 AM