A Share from Linda Hoelzel, Director of Dudley-Tucker Library Raymond NH See Poor Family Farm This is a project Linda is working on First Families of Raymond NH

This is an ancient family.  We can go back 800 years, and find the name in England.  We have made an effort to find the connecting links of those in this town, with the old family in England.  The evidence is that there are such connections, but labor and extensive research are requisite to find them.
William, Duke of Normandy, landed in England in 1066, with 60,000 men, fought the battle of Hastings, Oct. 19, was victorious, was called afterwards the “Conqueror,” and the period was called the “Conquest.”  He reigned, as king, 21 years.
The Poors came with him, and had lands in Wiltshire.  The name came, as was sometimes the case in early times, from something in the features, manners, or form of the person.  The testimony is, that the name was early given from the gaunt, sinewy, long appearance of the race.  Some say, it was because of their poverty.  It is said that, in the old country, the family passed in to the more stocky, English shape. 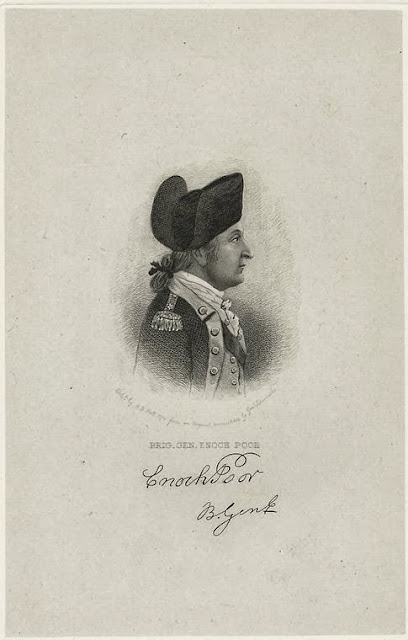 There was a Daniel Poor, born in England in 1628, who came to Andover, Mass., and died in 1713.  He had a son Daniel, who had a son Thomas, and he was the father of Gen. Enoch Poor, of the Revolutionary army.  Gen. Poor died during the war, and Gen. Washington was at his funeral.  A daughter of Gen. Poor, Mary, married Rev. Jacob Cram, who died in Exeter.  Patty, another daughter, married Col. Bradbury Cilley, of Nottingham, and Harriet, also a daughter of Gen. Poor, married Maj. Jacob Cilley, of Nottingham.  Harriet Poor Cilley, granddaughter of this last couple, was the first wife of Wm. B. Blake, Esq.

From what part of England, Daniel Poor, the first at Andover, came, can not be stated, nor whether he was a connection of the Poors in Wiltshire, to which we will now return.
Herbert and Richard Poor, brothers, were bishops.  In 1199, 133 years after the family came to England, John became king ; Bishop Herbert Poor assisted at the coronation.  John proved a weak prince, but passionate and tyrannical.  And in 1215, Bishop Richard Poor helped wrest from that unworthy monarch, the Magna Charta, or the Great Charter of Liberties.
Newbury, embracing what is now Newburyport and West Newbury, was settled in 1635.  One of the settlers, that year, was John Poore, there being an e at the end of his name.  There have been persons of the name there ever since, and likely descendants.


This John came from Wiltshire in England, where we have found the first of the name in that country, 569 years before.  He had 14 children, and died in 1684.  Samuel Poore, supposed to be a brother of John, had 9 children, and died in 1683.  Benjamin Poore, son of Samuel, married widow Mary Hardy, and their children were Sarah and Ann.  Samuel Poore, another son of Samuel, married Rachel Bailey.  Children:  Rebecca, Samuel, Judith, Sarah, Eleanor, and, the first Rebecca having died, another bore her name.
One branch of the Poor family lived at Indian Hill, in Newbury, and from that neighborhood came the first to this town, and settled in the Branch district.     Click for Poor Family Photos


Benjamin Poor, Esq., was the seventh of the children of Ebenezer Poor, just named.  His portrait accompanies this.  His name is frequently found in this book, in connection with the various offices he has held,- Selectmen, Representative in the Legislature, Justice of the Peace, and Road Commissioner.  He was born on the homestead of his father, and there has lived to the present.  He has a good constitution, and his looks, as in the picture, indicate one of only some sixty-five or seventy years of age.  The vigorous constitution was inherited from his parents, especially his mother, who, in a somewhat green old age, departed, after having lived 94 years, as will be found farther on in this work. 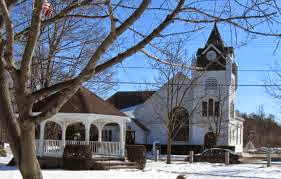 It is stated in the Introduction of this book, that it has been a labor of many years.  It is now fitting to say, the commencement was in the spring of 1847, twenty-eight years ago, although but little was done for many years, after a beginning was made.  Coming to the home of our childhood, disabled by the almost total loss of voice, and being told that silence was imperative, the question was, how time should be employed to some good purpose.  A voice within, as Quakers term it, was, “Write, Joseph, write.”  The purpose was immediately formed, to write the history of this much beloved town.  We began by seeking information from a class of aged persons, then living.  Much was obtained, which, had it not been secured then, would have been lost forever ; and Mrs. Sarah Poor, mother of Benjamin, was the first person of whom information was sought.

This lady was, before marriage, Miss Sarah Brown, of Poplin, now Fremont, and daughter of Captain Nathan Brown, who was in the war of the Revolution.
Esq. Poor is a farmer, and farming has been his occupation through life.  It is an important avocation, a business that lies at the foundation of most others.  The exercise is healthful, the profits, although often small, are sure, and what is obtained by labor and honest industry is enjoyed.  The bread of idleness is not good, but that gained by “the sweat of the face,” even, is the best that can be had.  These things are spoken of because applicable to this case, Esq. Poor having been long one of the substantial farmers of the town, and satisfied with his calling.
“Of all pusuits by man invented, The farmer is the best contented.”

Samuel Poor, the fifth of the children of the foregoing Samuel, followed his father on the homestead, was married to Sarah True, of Chester, April 9, 1808, by Rev. William Stevens, a local Methodist preacher.  He was a farmer, calmly, industriously and quietly attending to his affairs.  He was repeatedly chosen one of the Selectmen, and was Representative two years.  His wife died Sept. 30, 1859, and he died May 21, 1868.  Children:
1. John Lindsey, b. Jan. 9, 1809, married Sophia Shannon, of Candia, settled at the Branch, but came to the village a few years ago.  Charles, a son, lives in town, is Town Clerk.  Osborn J. died here, Sept. 2, 1871.  Two others live away.
2. Almira, b. Nov. 9, 1811, married, first, Edmund Whittier, second, Mr. Robinson, and settled in Western New York.  She still lives there, having recently married a third husband.  Her children were by her first husband, and will be named in the Whittier family.
3. Judith T., b. May 21, 1814, married Jonathan Currier, of Candia.  He died, and she returned here.
4. Asa K., b. March 24, 1818, married Betsy Towle, lives on the home place, is a farmer and mechanic. Children,-Rrufus H., Mrs. True and a son younger.
5. Samuel, b. Aug. 5, 1820, married Miss Elizabeth Murray, of Auburn, was a merchant in East Kingston, returned here, was in trade in the village, also salesman in Blake’s store, served as Moderator and Town Clerk ; went to Manchester, where he is now in trade.  He married, second, Miss Augusta Brown, of Candia.
6. Wesley, b. Aug. 31, 1829, married Lydia Richardson, settled at the Branch, afterwards in the village, has been one of the Selectmen, Moderator of town meeting, is a mechanic, and has two children, the oldest of whom is the wife of John D. Fullerton.
Posted by Melissa Davenport Berry at 11:27 AM