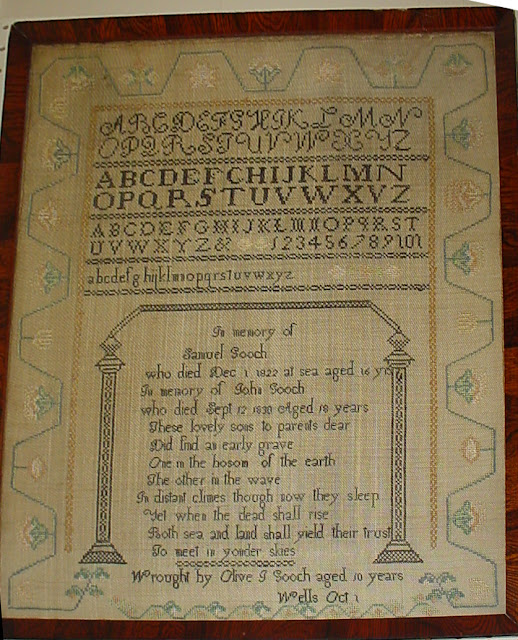 This one was worked by Olive Gooch* in memory of her two deceased elder brothers.
A Great Share from Leslie Rounds and her blog Executive Director
Dyer Library/Saco Museum 371 Main St. Saco, ME 04072 lrounds@dyer.lib.me.us
Besides sharing these extraordinary Samplers, Leslie was able to trace some of the family genealogy as well. You can purchase the book of Samplers
I promised to get back to the detectiveing on the Wells, Maine sampler group once I had some good pictures of the three samplers that I "found" at the Androscoggin Historical Society, and courtesy of David C. Young, the director. I first contacted the Androscoggin Historical Society--a small gem of a museum located upstairs in the courthouse in Auburn, Maine with a diverse collection of really neat stuff--because I discovered that they owned the Flavilla Barker sampler which was a twin to the one worked by her twin sister, Mary Jane Barker. Perhaps in the excitement of the moment, or maybe because I really, really wanted to borrow that sampler and didn't want to ask for too much and end up with no loan at all--pressing my luck, so to speak--I'm pretty sure I never asked them about what other needlework they might happen to own. When I returned Flavilla's sampler in late March I was stunned to see that they had three Wells, Maine samplers. Egads! So here they are, along with photos of the two I already knew about, and my research about the sampler makers:

Sarah b. 4 May 1803
Samuel b 2 Feb 1806 and d Dec. 1 1822
William b 1 Jan. 1809
John b 9 May 1812 d Sept. 12 1830
Olive b. 19 Aug 1822
Therefore: Olive stitched sampler in 1832, although she seems to have picked ou the year she did it, so as not to reveal her age in later years. It seems possible that there may have been more children born between John in 1812 and Olive a full ten years later, but Wells vital records don't mention them. On November 7, 1848, Olive married Walter Littlefield. Remember that, as it's about to become significant! They relocated to Melrose, Massachusetts, where she died on September 28, 1902.
﻿
Since Littlefield just about HAS to be the single most common surname in Wells, Ann was a little harder to track down then Olive Gooch. Ann's sampler, although very clearly related to the other four in the group by the interesting and intricate narrow black border also has flower elements in the wider border that have much in common with those used by Hannah Hill in her work. Ann Isabella Littlefield was the daughter of Walter Littlefield and his distant cousin, Isabelle Littlefield who married on September 27, 1817 in Wells. Their children were:
The third AHS sampler was worked by Mary Abby, Ann's elder sister: 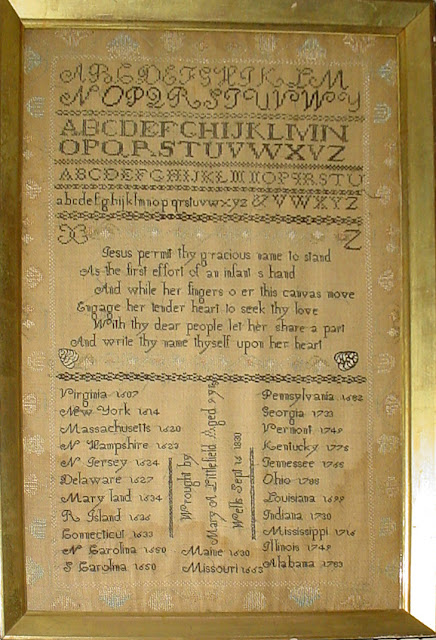 Hers, ever-so-delightfully--is the near twin of the one that was worked by Abigail Bragdon and is owned by Strawbery Banke--except it includes a pair of the quirky things--pinecones, perhaps?--that are a prominent feature of Hannah Hill's.

All of the samplers date between 1827 and 1832. All of them were completed between July and October, with three with September completion dates. Was it a school that was only open in the summer and fall, or is this just a coincidence?

As I have previously mentioned, this is a substantial body of work for a Maine academy, especially taking into consideration that it surely is not all that was done there. It's certainly possible that sisters of these sampler makers also completed works of their own and that more are tucked away or proudly displayed somewhere.

The identity of the teacher remains unknown, but may be discovered with further research...And here are the works of Abigail Bragdon and Hannah Hill: 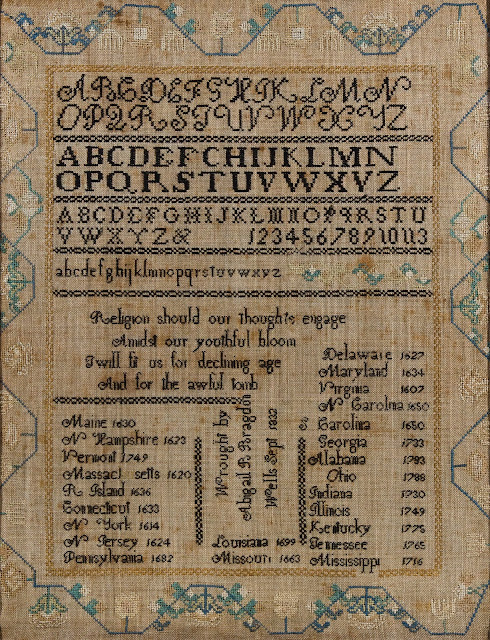 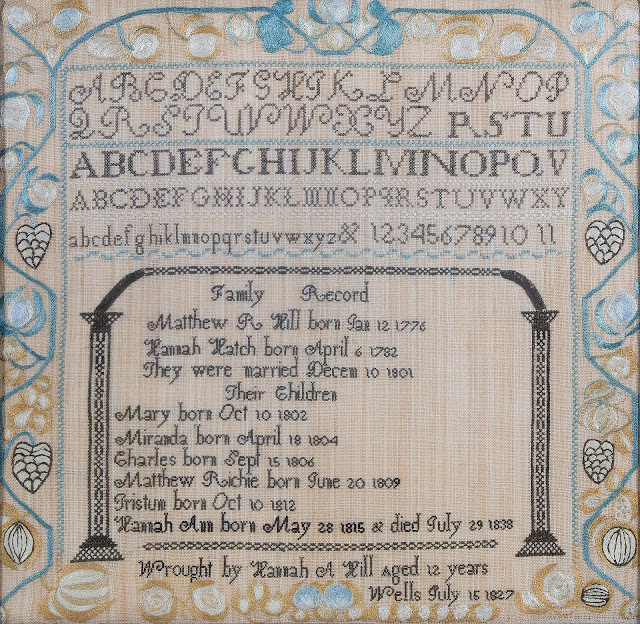 Isn't the connection between them a joy: a style that evolved in the most charming way to create a delightful body of work?﻿
Posted by Melissa Davenport Berry at 6:15 PM