The Big Breakup of Hampton 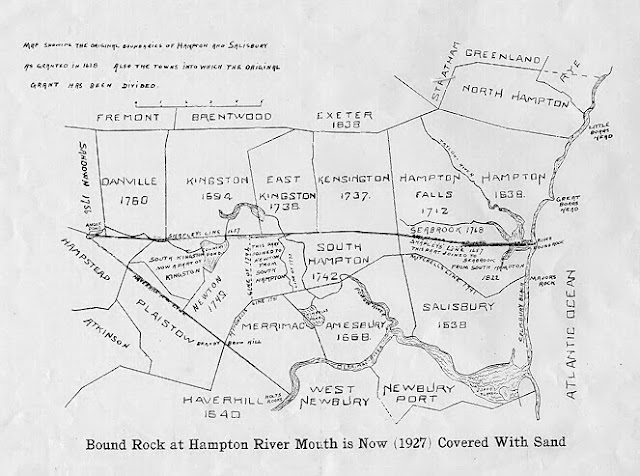 Up to 1677, the towns of Hampton, Exeter, Portsmouth and Dover had been considered a part of Massachusetts and were governed as such, in spite of the protest of Robert Mason, who claimed a prior right to the territory. A decision was finally made in England that neither Massachusetts nor Mason should rule this region and New Hampshire was made a Royal Province, the commission of the new government being received January 1st, 1680. The town henceforth became Hampton, New Hampshire, instead of Hampton, Massachusetts.

Sir Edmund Andros became governor of all New England and ruled with an iron hand. Along with other offenses he forbade the people to assemble in town meeting, except once a year, lest they consult for redress of their wrongs, and none was permitted to leave the country without his consent lest complaints be carried to the King. Relief came with the accession of William and Mary to the throne of England and the seizure and imprisonment of Andros in 1689, although this left New Hampshire without a government. 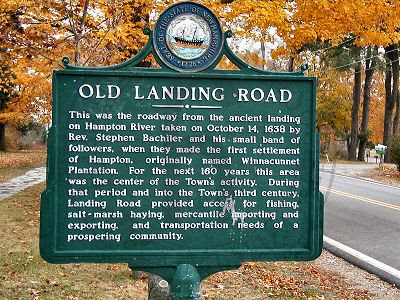 Delegates were chosen from the various towns to shape a convention, but petty jealousies arose and spoiled the attempt. Some form of government being necessary, a petition addressed to the governing body of Massachusetts, was drawn up at Portsmouth in 1690 asking them to take the province under their care and protection as formerly. Forty people from Hampton were signers and the petition was granted although a majority of the town was opposed, probably due to some conditions of the renewed alliance. The new arrangement was not satisfactory and relations were severed in 1692, and the province again had a government of its own, with the appointments of Governors from the sovereigns in England.
The spirit of the citizens being one of pioneering, several inhabitants of Hampton in 1694 petitioned the Governor and Council for a grant of a township, to be formed principally from the unimproved land in the western part of the town. The petition was granted on August 6, 1694 and the reduction in the area of original Hampton began. The new town was incorporated as Kingstown, and the grant included the present town of Kingston, East Kingston, Danville and Sandown.
The next slice to be removed was the part to be known as Hampton Falls. In 1712, a line, dividing the old and new parish, was established, and a separation made for church and school purposes; only the annual town meeting brought all together. 1718 is generally regarded as the time of its incorporation, and complete separation ensued. The area included the present town of Hampton Falls and Kensington. 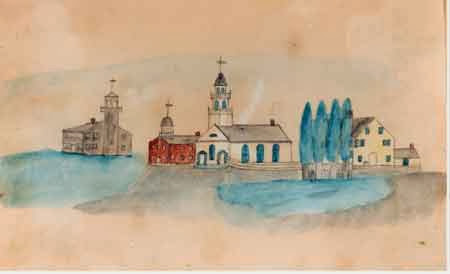 Soon after, the third division of the old town seemed apparent, as in 1719 the people living in the north part of the town began to petition for the establishment of a parish of their own. Opposition developed however, and it was not until 1742 full town rights were accorded and North Hampton was allowed to establish its own township. During the time the inhabitants of the North Hill, or North Hampton as it was later to be known, were petitioning for separation from Hampton, several families with a total of 1,800 acres severed all connectioins with Hampton and annexed themselves to Rye.With these portions taken one by one from the original town, the size dropped to its present proportions, from over one hundred square miles to less than thirteen square miles! 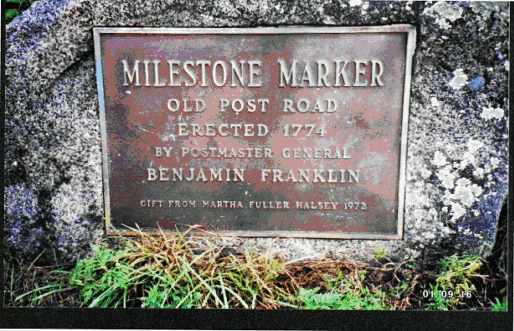 Beginning in the 1670’s, Post Road served as the mail route between Portsmouth and Newburyport. In 1753, Deputy Postmaster Benjamin Franklin, using an odometer, measured the routes and installed mileposts. The fee to post mail was based on distance. Over time, some of the posts were replaced. This granite post, engraved P/10N12, is the only one remaining in North Hampton.
Posted by Melissa Davenport Berry at 8:41 AM