Washington, Dec. 20th, 1879. To Capt. F. S. Dodge, 9th Cavalry:
The President wishes to make you a Christmas present in the form of an appointment of Paymaster. The vacancy does not occur until Jan. 1st, 1880. It will therefore be a New Year’s gift. Please acknowledge receipt. E. D. TOWNSEND, Adjutant General.” 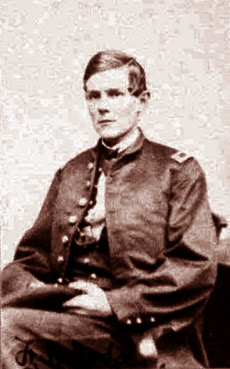 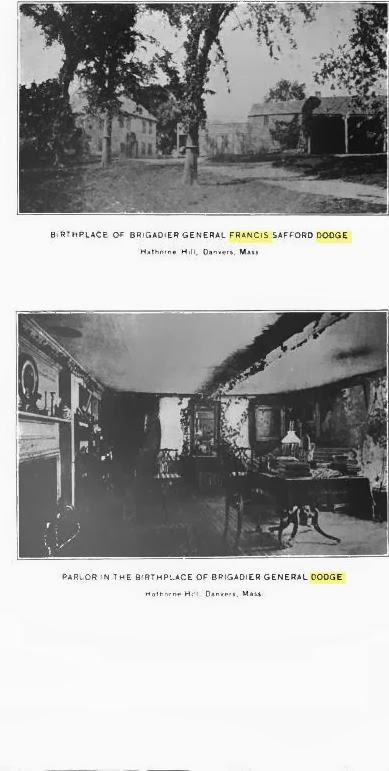 Article on Dodge Farm in The Boston Journal on Thursday October 16, 1873 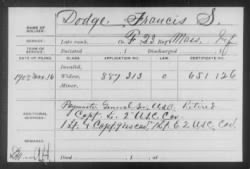 The following letter of congratulation from General Crook was very much prized by Captain Dodge:
Rawlins, Wyoming Territory, October 8th, 1879. Capt. Francis S. Dodge, 9th Regt. Cavalry:
Your recent gallant, rapid and successful march and charge to the relief of Capt. Payne and his command, surrounded by a largely superior force on Milk River, Colorado, affords me an opportunity which I seize with pleasure totender to you and your command my hearty congratulations and thanks. This daring march, in the face of imminent danger, to the relief of your comrades in arms, whose condition was critical, if not desperate, has made for yourself and your company a record of which every brave soldier may well be proud.
Very sincerely your friend,
Gaoxen Caoox, Brig. Gen’l.

At the age of nineteen, in 1861, he enlisted in the army, in the famous company of Col. George M. Whipple of Salem, "Whipple's Jewels." His entire service of four years was distinguished by unusual bravery under fire, which earned for him a Captaincy in the 2d U. S. Cavalry in 1865. Four years' service apparently had not impaired his taste for militarj'- life, and in 1866 he received an appointment in the regular army. As Captain of the 9th Cavalry, from 1867 to 1879, during which time he took part in some of the most thrilling conflicts with the Indians in the West, he was breveted and received a vote of thanks from the Wyoming legislature and a medal from Congress. In further recognition of his services the President, in 1879, made him a Christmas present of the appointment of Paymaster. From that time until the breaking out of the Spanish war his work often took him to the remotest parts of (See Essex Institute Hist. Coll., Vol. 46, p. 97) the country, and in 1896 he was promoted to Chief Paymaster of the Department of Texas. In 1898, he was transferred to Atlanta, as Chief Paymaster of the Department of the Gulf, and in the summer of that year was ordered to Santiago, Cuba, and thence to Porto Rico, sailing with 18 safes containing a million dollars, stowed away in two staterooms. He also had charge of the payment of the three million dollars ordered by our government to be paid to the Cuban army. In 1901 General Dodge, then holding the rank of Major, became Lieutenant-Colonel and Deputy Paymaster-General, and in 1904 he was appointed Paymaster-General with the rank of Brigadier-General. General Dodge contracted the yellow fever in Cuba, which seriously impaired his health, but upon his retirement in 1906, he bought a house in Washington, expecting to make it his home. He passed away February 19, 1908, and was buried in the National Cemetery at Arlington. General Dodge had a high sense of honor in public and private life; loyalty to his country and his friends. From The Chronicles of Danvers Old Salem Village by Harriet Silvester Tapley 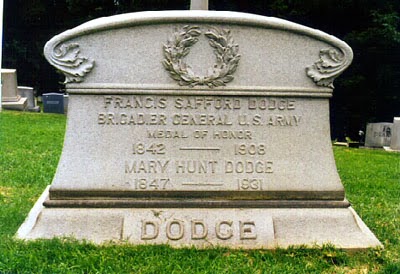