A Share from Brian T Phelps and The Phelps Genealogy Group
The Phelps family emigrated to the western frontier of the United States and arrived in western Illinois in 1836. 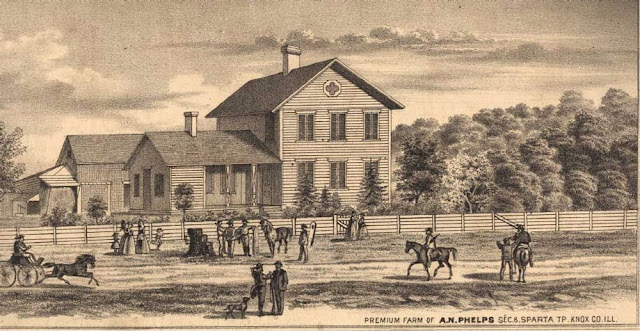 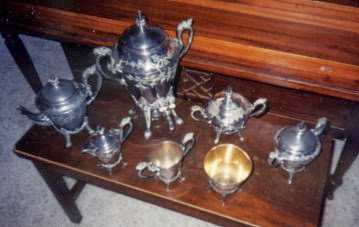 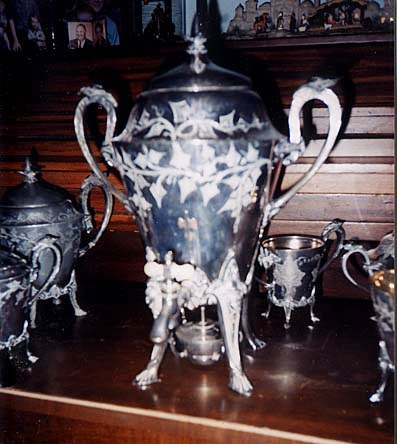 The entire table set. The pieces are silver plate, which has worn off in several locations, of slightly varying styles, and appear to be from two manufacturers. The coffee server is engraved, "Table Sett Awarded by the Illinois State Agricultural Society to Mrs. A. N. Phelps 1871."

For many years, the silver coffee server with the elephant ear handles and the delicate spout graced the top of the buffet in my grandmother's formal dining room. Usually wrapped in plastic to ward off tarnish, I never saw it used. My grandmother told me only that it had been won as a prize at a fair. As a child, I could only stare curiously and try to imagine the kind of county fair that would give away such a curious thing as a prize.

During World War II, many Californians feared they would be invaded by the Japanese. This fear was so strong within our family that they buried the treasured silver coffee and tea service at their cabin in the mountains outside Los Angeles. The service remained hidden there for a number of years until after the war, around 1953, when my grandmother took possession of it.

Hidden From the Japanese—The Premium for Best Farm 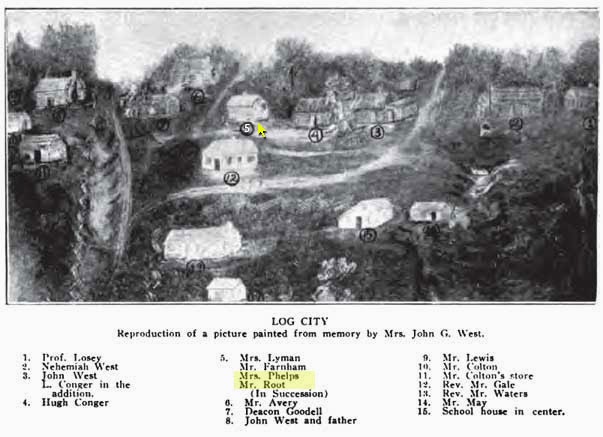 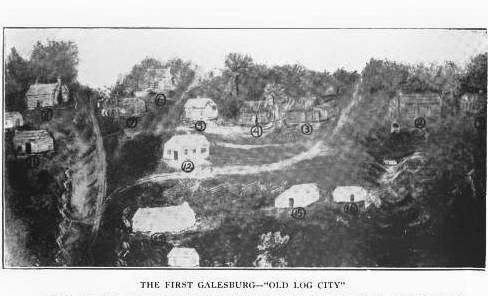 From The Averys of Groton: Genealogical and Biographical, Volume 2 Homer De Lois Sweet
George, fourth son of William Thomas Avery and Phcbe Throop: married, Jan. 24, 1839, S Princess Mary
Phelps, d. Aaron Noble Phelps and Clarissa Root, d. Dec children: 12, 1891 : Aaron was a colonel in the war of 1812;
511 Robert Henneman, born Jan. 7, 1840.
512 John Thomas, b. Dec. 25, 1841, md. Flora E. Olmsted.
513 Mary, born Aug. 13, 1844, md. Rev. William R. Butcher.
514 Cyrus Minor, b. Jan. 19, 1846, md. Minnie E. Bartholomew.
515 Phebe Throop, born Dec. 21, 184b, still single.
516 George, junior, born April 9, 1854.
517 Frederick, born Oct. 15, 1857, died Nov. 25, 1860. Resides Galesburgh, 1ll.
From US Gen Net email ilcoknox@usgennet.org
GEORGE AVERY, one of the oldest and most highly esteemed citizens of Kox County is Mr. George Avery, of Galesburg. He was born in Columbia County, N.Y., Dec. 2, 1802. His parents, William and Phebe (Throop) Avery, were of New England ancestry, although slightly tinged with foreign blood.
The former died in the east when our subject was a young man. They had a family of eight children—George, Nathan, Clarissa, Hyde T., William T., Deborah, John T., and Cornelia. Nathan was a physician, and married a Miss Rivers of Tennessee. Both are deceased, leaving one son, William T., who has served in Congress from Tennessee. Clarissa married Silas Churchill and both she and her husband are deceased. They left a family of five children, three boys and two girls. Both Hyde T. and William T. are also deceased, the latter dying in Indiana. Deborah married John Kendall, the celebrated thermometer-maker of New Lebanon, N.Y., where they now reside; three daughters have been born to them. John T. married Sarah Whiting, and resides in Cleveland, Ohio, and has a family of five boys and two girls. Cornelia became the wife of William Ball, and is living in New York.

Alternating the duties of a farm life with attendance at the common school, our subject passed his younger life in the vicinity of New Lebanon, N.Y. Early manhood found him possessed of a very fair English education. He was about 34 years of age when he came west, and the year 1836 found him upon the ground now occupied by the city of Galesburg. Indeed he was one of the first members of that society known as the Early Settlers’ or Pioneers’ Association, the object of which was to found a Christian College. It will be highly proper in this connection to speak of him as one of the most enterprising, industrious and active workers that ever entered Knox County.

The farm on which he lived up to 1867 was that piece of property which he purchased in the beginning, joining the corporate limits of the village, and he has come as near witnessing every step of the growth of this place as any living man. In the year last named (1867) he turned his farm over to his sons and retired to private life. Through a citizenship of full half a century, mingling daily with people who so rapidly settled around him, transacting business with hundreds, aye, with thousands in the aggregate, it is remarkable that not once in his life has he ever been summoned to court to answer the complaint of any man. He began life a poor boy, and has since inherited nothing except the reward that always eventually descends to the industrious and persevering. He was so fortunate as to add to his possessions a wife of many worthy attributes and a helpmate in its truest sense, one of those women whose price is above rubies. Together they have labored, and age finds him possessed of an ample competency. He was active among the early railway organizations of this place, and in fact all public enterprises of merit ever found in him a substantial friend and a strong advocate.

When Mr. Avery came to this county, the trip was made by the usual overland route, requiring eight weeks’ time to make it. A gentleman by the name of Col. Mills brought a colored boy about 12 years of age with him from New York. Mr. Mills dying, his widow requested Mr. Avery to take charge of the boy, which he did and was compelled to pay taxes upon him the same as he did upon his horses. Mr. Avery, being a strong Abolitionist, wrote back to New York for the boy’s free papers, to show that he was not taxable property. 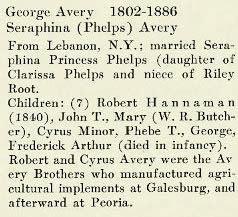 Mr. Avery’s marriage was celebrated Jan. 24, 1839, in Knox County, when he was united in holy matrimonial bonds with Miss Seraphina Princess Mary Phelps, a native of Massachusetts. She was the daughter of Col. Aaron N. and Clarissa (Root) Phelps, natives of Westfield, Mass. The Phelps family is one of the oldest in New England. William and George Phelps landed in America May 30, 1630, coming from England on the ship “Mary and John”, commanded by Capt. Squibb. Aaron N. Phelps was a colonel in the War of 1812. Mrs. Avery was born Jan. 19, 1815 and was the eldest of a family of three children. The others, who are deceased, were Mrs. Sybelana Kilbourn and Royal A. N. Mrs. Avery came to this county in 1836 with her mother, her father having died six years before. They settled in what is now Galesburg, where the mother died in 1856. Mr. and Mrs. Avery have had born to them seven children, as follows: Robert H., President of the Avery Corn-Planter Company of Peoria; John T. a farmer of Rio Township, this county; Mary, now Mrs. Rev. William R. Butcher of Wataga; Cyrus M. of Avery & Co. of Peoria; Phebe T. now living at home; and George, a farmer of Kansas. Fredrick Arthur died when about three years old. Robert H., the eldest son, married Miss Sarah P. Ayers; they are the parents of five children—Minnie E., Fredrick A., Sadie T., Cornelia, and Ellen K. Robert enlisted in Co. A, 77th IL Vol. Inf. in 1862, and served until the close of the war. He was taken prisoner and placed in Andersonville prison, where he remained for about eight months. He is the inventor of the Avery Corn-Planter, as well as other useful implements, and owns a controlling interest in the factory at Peoria. John T. took to wife Mrs. Flora Olmsted. Mary became the wife of Rev. William R. Butcher, and they have five children—Harry E., Mary Z., Etha, William, and Irene. Cyrus M. married Miss Minnie E. Bartholomew, and to them have been born three children—Elvira P., George L, and Grace O. George married Miss Ada Wood, and they are the parents of three children; the name of the only one living is Edith L. Cyrus M., who is now Secretary of the Avery Corn-Planter Company, graduated from Knox College, standing No. 1 in his class.

Mr. and Mrs. Avery are consistent, sympathetic Christians, and are connected by profession of faith with the First Church of Christ. Mr. Avery is a stanch Republican and Prohibitionist