by Melissa Berry Please e-mail me if you have parents information. Thanks 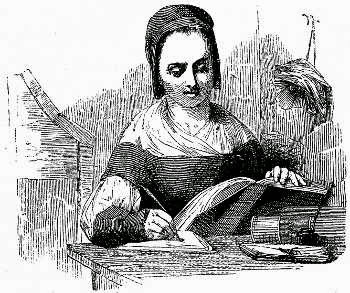 The Franklin women were quite crafty and creative! It was not uncommon for women to act as silent partners in the family business. In fact, women were hands on in the shop rather than the stove top and they always filled the role efficiently and successfully. (note many of the Franklin wives were superb cooks as they possessed a myriad of talents. Perhaps it would be better put---they not only brought home the bacon, but braised it to perfection). It was not until the Industrial Revolution women were forced back on the sofa to tend their needle work and tight corsets! The records reveal that when women were an integral part of the biz, the household income was quite substantial in comparison to a one man show. 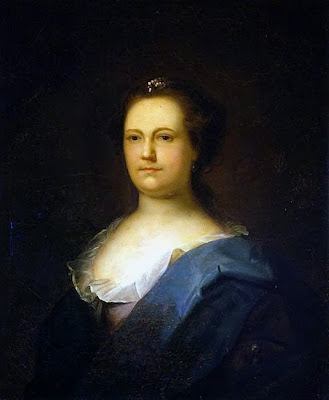 Deborah Read Franklin b. 1708 d.1774 daughter of John Read and Sarah White Read.
She m. first, John Rogers who ended up ditching her and spending her dowry. Franklin recorded later that the lout died in the West Indies.

Deborah ran the print shop when Ben was out of the country or pursuing his other interest. Her mother, Sarah Read ran a shop next door and no doubt Deborah learned a great deal from her. He notes in his autobiography that Deb was "a good and faithful helpmate." and "they throve together." Deborah kept the books, set type and ordered the supplies. She was a champion business women and her role in Ben's life was like a strong solid support of a house foundation.


Anne Smith Franklin b 1696 d. 1763 in Boston, daughter of Sam Smith and Anna Smith.  In 1723 she married James Franklin, Ben's brother. The couple operated a newspaper together called The Rhode Island Gazette. This was the first printing shop to operate in the the New Port, RI colony. It was popular, but when James passed in 1735 Anne was left with five children to raise, cloth, and feed. Luckily, she had the skills, smarts, and sense to create a thriving enterprise. She wrote to the General Assembly of Rhode Island requesting to contract all of the colonies printing publications and materials. She appealed to the softer side of the male dominated council humbly asking them to allow her the opportunity to support herself and her children. She was granted the contract and went on to thrive. She printed sermons, advertisements, and popular British novels. she also printed the Rhode Island currency.

Anne's independent spirit had quite an influence on the local dames as they began utilizing her press for their own grievances. In one case, a widow of a local distiller filed a public petition to her husbands partner, who had swindled her out of stills and stock shares. After the press leaked the skinny on the sneaky stiller he poured loot and lots of it back into the wise widows account. 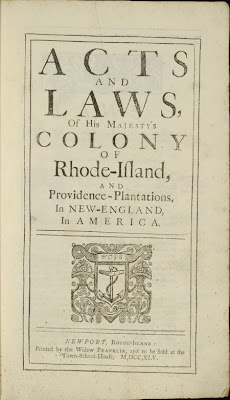 In 1745 Printed 500 copies of Rhode Island Almanack a very lucrative venture for Anne She was known as the official colony printer. Also the country's first female editor--The Mercury (produced with son James in 1758) and the first woman to write an almanac. 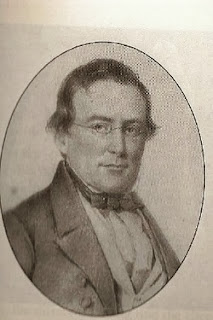 The Aurora newspaper was a highly acclaimed publication. Margaret ran it while Benjamin was promoting the Jay Treaty in 1795. The newspaper was one of the most popular in America. It was extremely liberal even for grandpa Ben's taste who favored the pro-French and Democratic polices. Margaret was known to be feisty-she had a sharp tongue and witty humor. After her husbands passing Margaret became the sole proprietor.
Margaret Markoe b. 1770 Caribbean, Santa Cruz Island, West Indies d. 1836

Posted by Melissa Davenport Berry at 8:31 AM