The Brocklebank-Nelson-Beecher house is a First Period Colonial house located at 108 East Main Street (Route 133) in Georgetown.
Great old article on the house from Boston Globe February 1, 1892
This ancient and historic landmark is situated on the corner of Main and Elm Sts., on the direct road to Salem. It was built by Lieut. Samuel Brocklebank (1628-1676) in 1660; he also owned a farm of 72 acres.
Although this house is 231 years old, a passer by would hardly take it to be a half century old, as it has always been kept in good repair.
It contains 10 rooms, with two stories and an attic in front. On either side of the front door, facing the south, arc two large rooms, used as sitting-room and parlor. They are very low studded. Each room contains a large open fireplace; the large oaken beams and posts nearly a foot square, stand out prominently.

Many improvements have recently been made on the old House, the windows have been taken out and the west side raised. But the antique roof still remains, a delight to the antiquarians. It was laid out across the Brocklebank farm near the residence of John Preston, through what is now known as Pentucket Sq.; then up Andover St., over Spofford's hill to connect with the Haverhill and Salem Road, near the house of Edward Poor.

In those colonial days it was the custom for the pioneers that lived for miles around to assemble at this house with their families every night for protection from the Indians. And more than once they returned in the morning to find their homes in ashes and their crops destroyed by the Indians.
Lieut. Brocklebank was appointed captain, and was killed in a fight with King Philip and his warriors in Sudbury on April 20, 1676.
(See Photo below by Beca Find A Grave 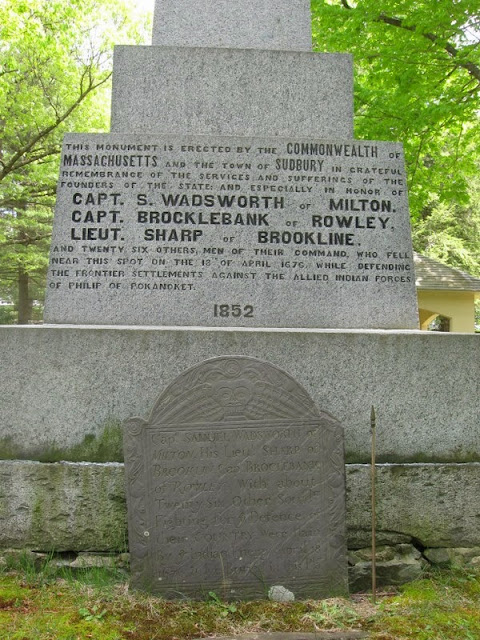 After Capt. Brocklebank's death the inventory of his estate was made and the record is found: Farm toward Bradford, 150 lbs.
In 1686 his eldest son Samuel, who was then 24 years old, lived on the farm.
A committee appointed Nov. 20, 1686, met at this house to consider a claim for damages caused by a highway opened through his farm. This was the Rowley and Haverhill road, opened years before by his father.
In 1720, this Samuel Brocklebank, then known as Deacon Samuel, of the Byfield church, deeded this house and the adjoining land to his youngest son, Francis, provided he would support himself and his wife through life.
Six years before, Deacon Samuel Brocklebank had given his eldest brother John a deed of all the land that now comprises Georgetown centre. 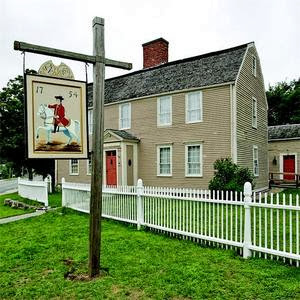 In 1745 Dudley Tyler came into possession of this farm bv marriage: as the house was large he opened an inn. This sign was about four feet square, and it used to hang on a pole in the front yard. Solomon Nelson who purchased the property in 1767.  The sign is still in good condition, and is the property of Mr. Humphrey Nelson.

In 1760, when a new meeting-house or the removal of the old one then standing near where the house of David Brocklebank now is, had caused a very sharp controversy, Caleb Cushing, Samuel Phillips and Thomas Lewis met here as an advisory committee to consider the matter.

After Mr. Tyler, the next owner was Solomon Nelson, the father of Nathaniel Jeremiah of Newburyport, who was a member of Congress from Essex North for 20 years or more.

The patriots of the Revolution assembled at this house before starting for Lexington, April 19, 1775. On seeing this sign of Gen. Wolfe they shot at it. The holes made by these bullets are still plainly seen. 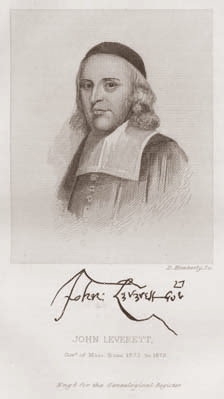 A excerpt from letter sent by Capt. Samuel Brocklebank of Rowley, to John Leverett, Governor of Massachuesetts, in 1675:
To the Honored Governor and Counsel, This may certifie that we have impressed twelve men according to our warrant and have given them charge to fit themselves well with warm clothing, and we hope they will and doe endeavor to find themselves as well as they can; only some of them are men that are but latly come to town, and want arms, the which to provide for them we must press other men's arnica, which is very grievous.
In 1858 the house was purchased by Rev Charles Beecher (1815-1900) brother of Henry Ward Beecher. The home was parsonage for the Old South Church. 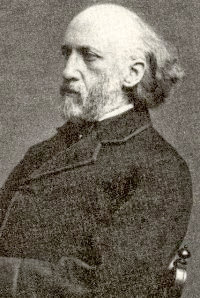 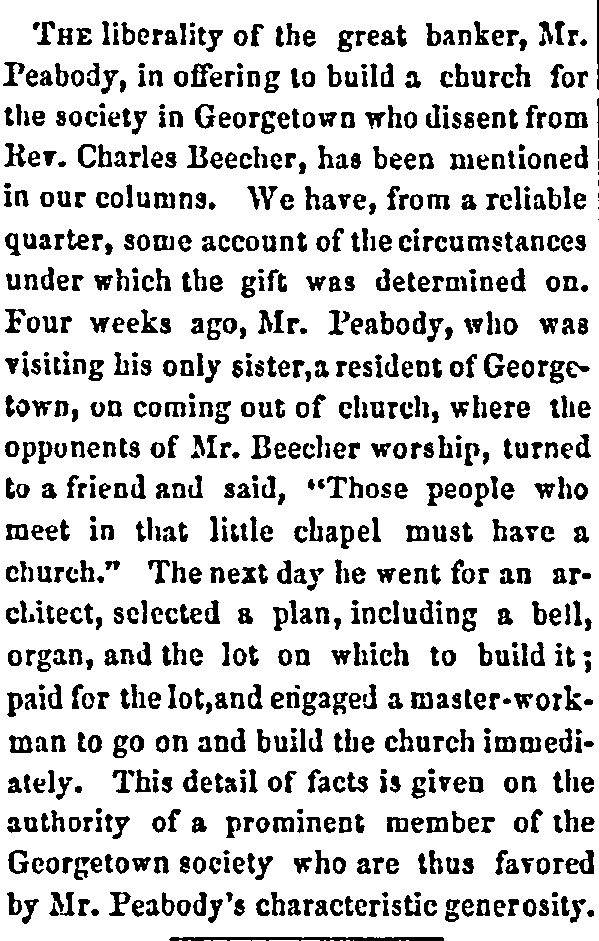 From Standard History of Essex County by Cyrus Mason Tracy
The long condition of harmony in the Orthodox Church at length gave indications of being disturbed by a difference of opinion, in reference to certain fundamental theological questions, between a portion of the church and the Rev. Mr. Beecher. The theological eccentricities of Mr. Beecher—the leading one being the doctrine of pro-existence— became so prominent in the minds of those who dissented therefrom, that unity in the support of his ministry could no longer be maintained ; and Jan. 17, 1864, eighty-five members, by consent of a council convened for that purpose,withdrew, and organized themselves under the name of the First Orthodox Society, of Georgetown, establishing worship in the chapel occupied by the Ladies’ Benevolent Society.

In 1865, a sister of George Peabody, of London, observing the position of this society, conceived the idea of having a church built for their use, and suggested the idea to her brother of building a church there, which should stand as a memorial to their mother. The suggestion met with the prompt and cordial approval of Mr. Peabody, who at once signified his purpose to carry out the plan, and a site for the church was selected in 1866, upon which the structure was erected, and dedicated in 1868, at which time the new organization took the name of the "Memorial Church.” It is located on Main Street, and is built of brick. In the rear of the church, and upon the same lot, is located the Library Building and the Peabody Lecture Hall.

The portion of the old society remaining with Mr. Beecher rallied to his most cordial support, and was re-enforced by additions from the less conservative portion of the community, who saw in his position, made prominent by the action of the seceders, a new religious departure. Although there appeared a peculiarity and independence in Mr. Beeeher’s belief in certain things, his position was not regarded as decidedly unevangelical. He retained and still retains the leading evangelical views of the Congregationalists, blended with his own philosophy, forming a theory, probably, more harmonious to his own mind than it is to the judgment of many others. He is an independent, vigorous thinker and writer, whose suggestions, if followed to their legitimate results, would open into very broad fields.

The old meeting-house had become too dilapidated for agreeable occupancy; and directly after the erection of the Memorial Church, a new and very beautiful house of worship was erected for Mr. Beecher, on the corner of Andover and Middle streets, fronting on Monument Square.

The ministry of Mr. Beecher has been well sustained,—a large, flourishing, and intelligent congregation having been gathered about him. During some portion of his ministry of twenty-one years in this town, his health has been such as not to withstand the rigors of a northern climate, and he has passed some of his winters in Florida; but he has been the constant pastor of the society, and in his absence the pulpit has been supplied in such ways as the society devised.

For a time, the Rev. Thomas R. Beeber was settled as colleague with Mr. Beecher, but resigned his ofiice in March, 1875. He was succeeded in 1876 by the Rev. Alfred F. Marsh, who remained only one year. Mr. Beecher’s health is now quite improved.

Essay: The Beechers In Our Backyard   by Agnes Howard 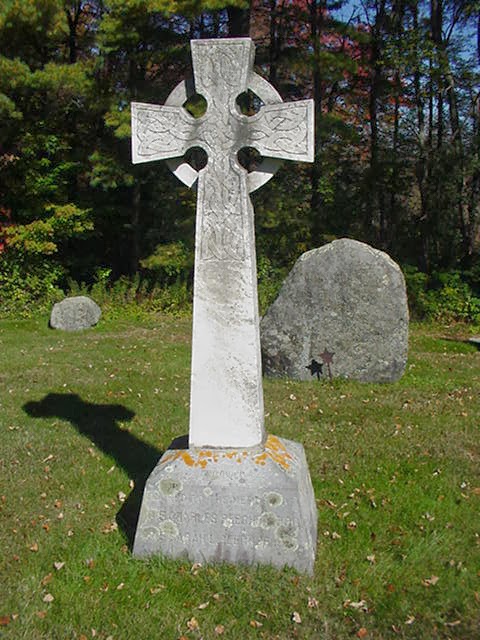 ENDOWED SACRED TO THE MEMORY OF CHARLES BEECHER David @RAOGK

According to legend a servant girl mysterious trunk Mary Harrod Northend the event took place in 1679 when Hannah, the housemaid lifted the lid of the wooden chest to take out the meal to sift it for biscuit. The chest "commenced to jump and down and jog along the floor two or three inches at a time." Hannah was frightened and sent the children next door to the neighbors so they could witness the haunting event. When all surrounded the possessed trunk it remained still, but when Hannah touched it--"it commenced its grytations, trotting all over the room and becoming so noisy that the minister was sent for." When the minister arrived he knelt and prayed with all his power as the trunk bounced around the room. By then there were over 20 witnesses and the minister requested one large lady to sit upon it, but "it kept on with its jigging." Hannah was released from her duties and the trunk has sat silent and still since. The “Haunted Meal Chest” can be examined today visit The Brocklebank Museum
Georgetown, Ma
Baldpate Hill  The highest Hill in Essex County is Baldpate Hill located on borders of Georgetown, MA and Boxford, MA
Check out  The Essex Antiquarian. Vol. II. Salem, Mass., July, 1898. No. 7.
CENTRE OF GEORGETOWN IN THE YEAR 1800. BY SIDNEY PERLEY.
The original house was extended several times in its early years, and is now a gambrel roofed, 5-bay, center chimney dwelling of early eighteenth century appearance. A number of items are exhibited within, including many of Capt. Brocklebank's journals. There are also many historically accurate pieces within as well as a display of a small back yard shoe shop. 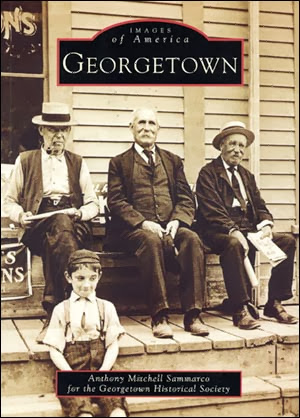 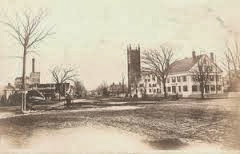 Posted by Melissa Davenport Berry at 7:31 AM