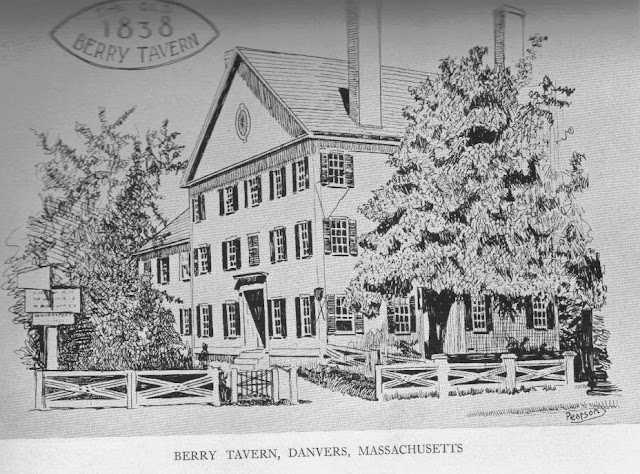 The tavern was first owned by John Porter, licensed to run an ordinary in 1748. His widow Aphia sold it to Colonel Jethro Putnam who operated  it from 1799-1803. Josiah Dodge, jr. managed it and in 1804 Ebenezer Berry, Sr. bought it.

"He kept an inn or tavern here until his death in 1843, and then the same came into possession of his son, Eben Gardiner Berry, and from him it passed to his descendants, who now own the same.  The old tavern was removed in parts when the present house was erected, and the hall part, that portion of the same which had been a part of the beautiful mansion erected on Folly Hill by William Browne, of Salem, about 1750, was also removed a short distance away and in the great fire of 1845 was burned, that fire which destroyed most of the buildings on both sides of that portion of Maple Street lying between Conant and Cherry streets. Many distinguished persons must have tarried here. 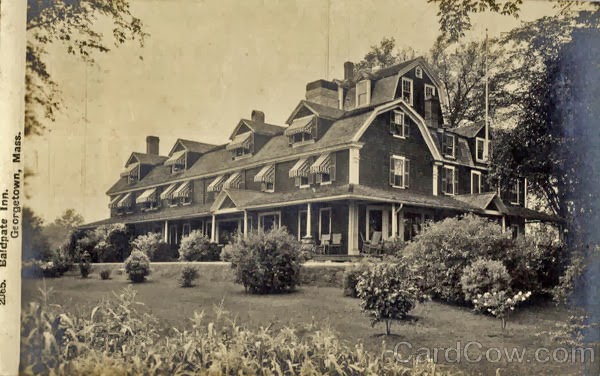 The hall of the old house was the portion of the " Browne Hall" already referred to. This hall was used on all state occasions. The officers of the militia at the May trainings had their headquarters here. The selectmen of the town met here, as did also Jordan Lodge of Masons, and here also were held the meetings of the Danvers Lyceum. Dr. Braman once delivered a very funny lecture in this hall, the subject of which was " Quackery." Many debates took place in the old hall. And it is said that here were held those dancing parties, at the mention of which old eyes kindle and limbs no longer sprightly beat time to the echoes of the darky Harry's fiddle, which still linger in their ears. Mr. Eben G. Berry conducted the house up to 1870, when he retired from active management. It was known as the Howard house by the management Edwin A. Southwick, who managed it up to the time of his death in 1895. Mr. Berry died the same year, and during the settlement of the Southwick and Berry estates, Mr. Littlefield managed the house. The present lessee, Mr. Brown, took possession in the latter part of 1896 Danvers Historical Society 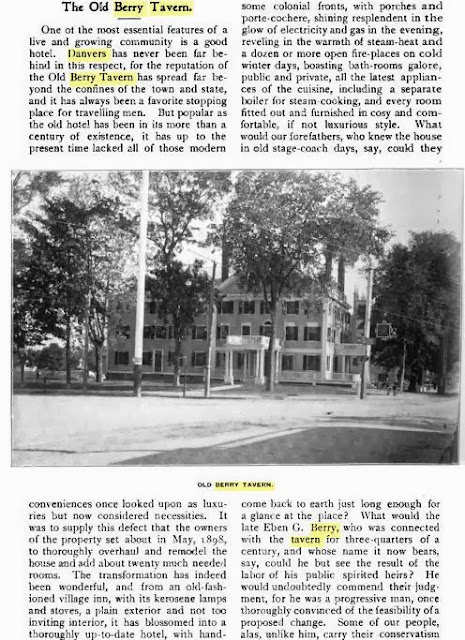 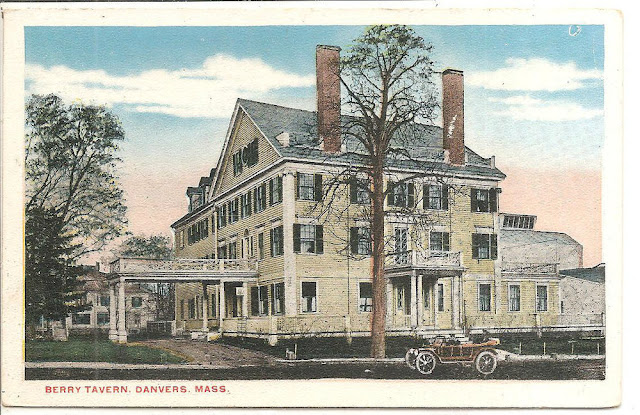 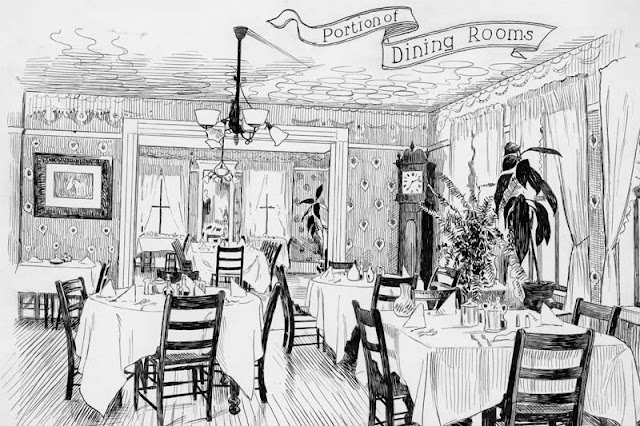 Ebenezer Gardner Berry was a descendant from the early Newbury Ma and Rye Beach settlers. He was son of Ebenezer Berry and Ruth Peabody. 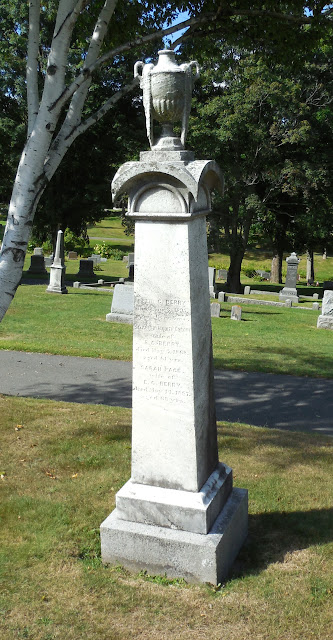 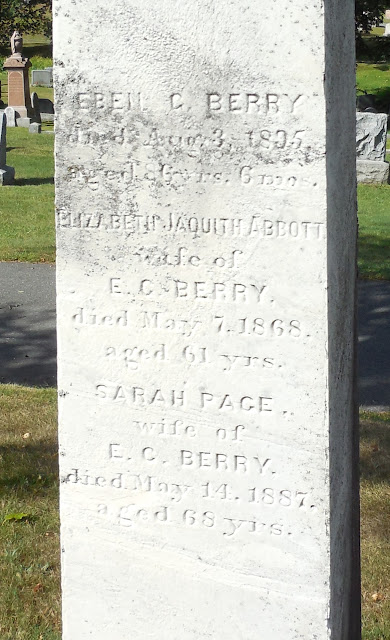 From Mrs. Louisa Crowninshield Bacon Personal Reminiscences Of The Old Home At Danvers, Massachusetts:
"It must have been about 1848 that I first remember going to stay with Grandpa and Grandma Putnam, but afterwards the visit became annual. We went in the train to Salem, where we took the real old-fashioned stage-coach for Danvers. It was a very hot day in May, and I sat on the middle seat of the coach. This seat folded over to let in the more favored passengers who sat in the back seat, after which it was folded hack and a rather wide leather strap was fastened at the end with an iron pin, making a back for the occupants, but toohigh to be of any comfort to the very young, who could hardly reach it. We drove through Salem and South Danvers, passing the large house on one side of the road and the brick woolen mill on the other belonging to Richard Crowninshield. I think we passed the old Judge Collins house, as it was then called, then Danvers Plains and Mr. Berry's tavern, where we once passed a summer. Mr. Berry was much interested in my mother's collecting old-fashioned furniture and crockery. We still have in the family a fine old oak armchair, much carved, and some very beautiful old Chinese porcelain, highly decorated, that he found in Andover, I think. Then came a hawthorne hedge on the right side of the road, soon followed by a privet hedge which made one side of Grandpa's garden, when we turned into the yard and stopped at the front door, which was on the end of the house.
From Historical Collections of the Danvers Historical Society Volume 10
Dr. John H. Nichols expressed for himself, and for all the family, their appreciation of all the words spoken for the sake of honoring the memory of his father." An obituary notice in the Salem Evening News, immediately following his death, includes these paragraphs: "His was the unseen influence behind the events which culminated in the passing of the title of the present public park from Eben G. Berry to the Improvement Society. He plotted what is now known as 'Back Bay' for Mr. Berry, in 1895, and the arrangement of the street lines and lots made the utmost out of the desirable location. 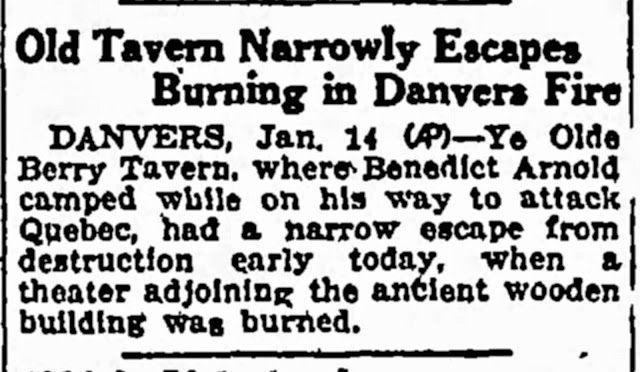 From History of Essex County Volume 2
The first meetingr of the stockholders of the Village Bank was held “ at Eben G. Berry's Tavern," on Friday April 22, 1836. Elias Putnam was chosen moderator and Moses Black, Jr., clerk. It was voted to accept the charter granted by the Legislature, and Elias Putnam, Jeremiah Stone and Eben Putnam were chosen to consider favorable locations for a banking-house. At adjournment, May 9th, the first board of directors were chosen, namely: John Page, Eben Putnam, Samuel Preston, John Perley, Elias Putnam, Daniel F. Putnam, Joseph Steams, Amos Sheldon, Moses Black, Jr., Samuel Putnam, Nathaniel Boardman, Frederick Perley. It was reported “ that lv‘leeper’s house and land on the corner could be purchased for $3000, and that it would be a favorable place for a Bank,” and later this estate was purchased for $2800.

A "DanVeis Female Anti-Slavery Society," of which Mrs. Isaac Winslow was chosen the President; Mrs. Richard Loring, Vice-President; Miss Harriet N. Webster, Corresponding Secretary; Miss Emily Winslow, daughter of Isaac Winslow, (Mrs. Emily W. Taylor, now of Germantown, Pa.), Recording Secretary, and Mrs. Elijah Upton, Treasurer; with Mrs. Eben Upton, Mrs. Amos Osborn, Mrs. Benjamin Hill, Mrs. Charles Northend, Mrs. Abel Nichols, and Mrs. John Morrison, as Councillors. The Society was evidently meant for the whole town and probably its sixty members represented the North Parish as well as the South. Mrs. Abel Nichols, not to mention others, was of North Danvers, and she and her husband were among the best of abolitionists. Their daughter, the late Mrs. Eben G. Berry, recalled with what fear and trembling she was wont, as a young girl, to circulate antislavery documents, and their nephew, Mr. Andrew Nichols, now of Danvers, son of Dr. Andrew Nichols, remembers how he used to be stoned in the streets for procuring subscribers to anti-slavery papers. But among the men of the place who were earnest for emancipation, there were—besides Isaac Winslow and Joseph Southwick—Mr. Abner Sanger, whom Frederick Douglass so deservedly hoaors in his eloquent letter; Eli F. Burnham, Amasa P. Blake* and Andrew Porter; and Dr. Andrew Nichols and Alonzo P. Phillips, both of whom were of the highest character and came to be prominent and influential members of the Liberty party. 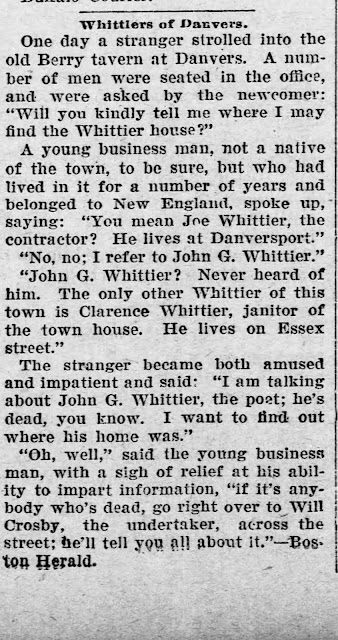 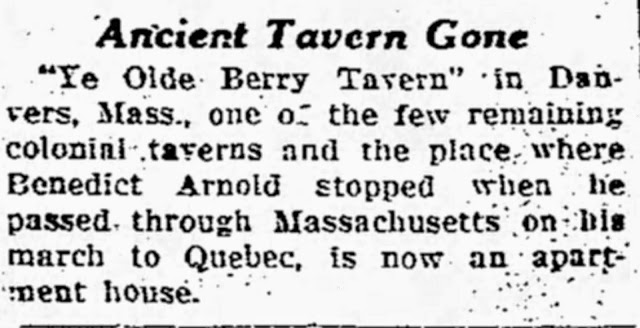 In the Danvers Archival Center a poem written by Eben “Milan [Murphy] and his wife Happy”
Posted by Melissa Davenport Berry at 6:56 AM