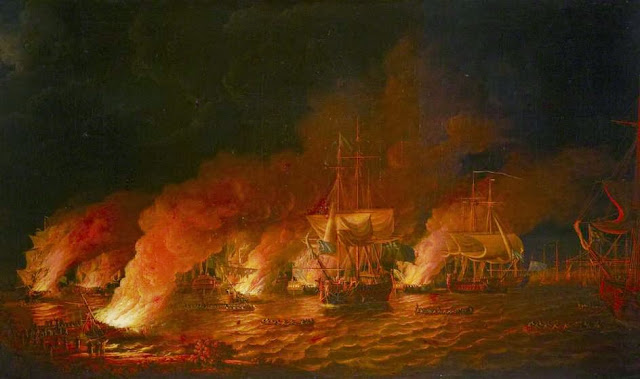 William Davenport son of James Davenport and Grace (Tileston) Davenport moved to Newbury 1738 from Boston. He married Sarah Gerrish, daughter of Moses Gerrish and Mary (Noyes) Gerrish. In 1741, he purchased of Samuel Greenleaf land on Fish, now State, street, with a dwelling house thereon, which he owned and occupied until his death, in 1773. William command a company in the expedition that sailed from Louisbourg, in June, 1759, for the reduction of Quebec. He was in the battle on the plains of Abraham on the thirteenth day of September, when General Wolfe was killed. (History of Newburyport Currier) See The Wolfe Tavern: The place where our ancestors tarried 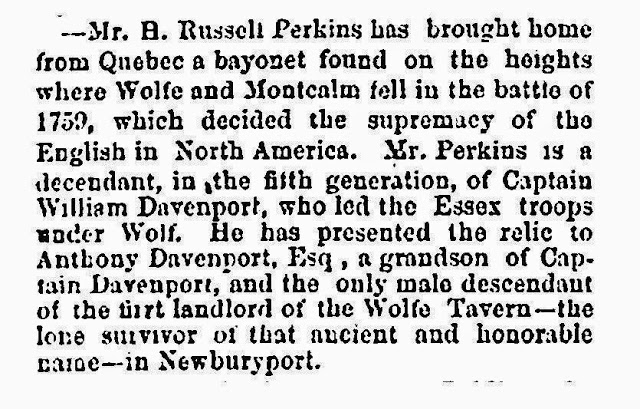 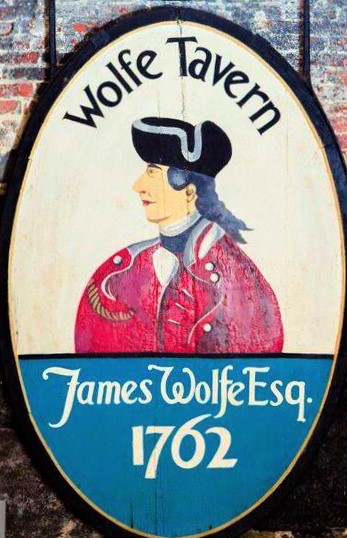 According to History of Essex County Volume 2 before Davenport departed he tossed Sarah a guinea and "told her she must make that answer while he was gone."  Sarah would have to manage the household along with their five children, but when William returned seven months later and asked her how “she had got along,” she replied by tossing the guinea back to him. More on General Wolfe
After a few months from returning from the fight William opened the Wolfe Tavern, AKA Davenport's Inn on the corner of Threadneedle Avenue and State Street. The tavern sign was a portrait of Gen. Wolfe, 'painted by Moses Cole, a French refugee" hung over the door. After the fire in 1811 the sign was kept by Major Ben: Perley Poore, at Indian Hill. (Old Newbury Historical and Biographical Sketches John James Currier) 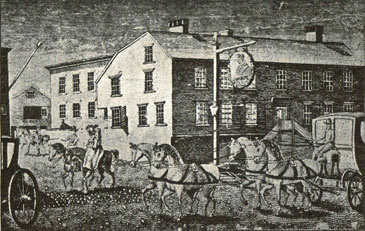 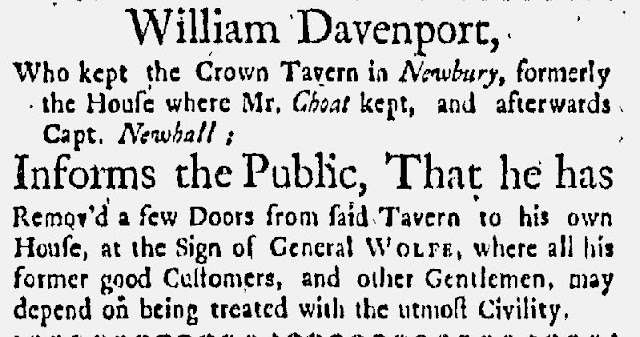 Dec. 2, 1772, voted that the Marine Society shall meet at Capt. William Davenport's. History of the Marine Society of Newburyport, Massachusetts, from Its Incorporation in 1772 to the Year 1906: Together with a Complete Roster and Narrative of Important Events in the Lives of Its Members
Nathaniel Knapp diary, written at the second siege of Louisburg:
Wednesday, 13 June, 1759----there is 8 or 10 Sail of Ships; one frigate Came in from Boston. Capt. Davenport is in one of them, and this afternoon I went on Board ye Ship to see Brother John Moody and he was well and all acquaintance.
Two days later he wrote as follows : — Friday 15. this Day fair Weather, I was to work on ye Scooner of Dixons. 6 Ships Came in to Day. I was on Board Davenports Ship, and Brought John Moody ashore with me and Let him have six dollars.
Sunday, June 17 1759 —Capt Davenport sailed for Canada to day. 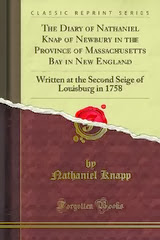 The company, under the command of Captain Davenport, consisted of the following officers and men listed below as 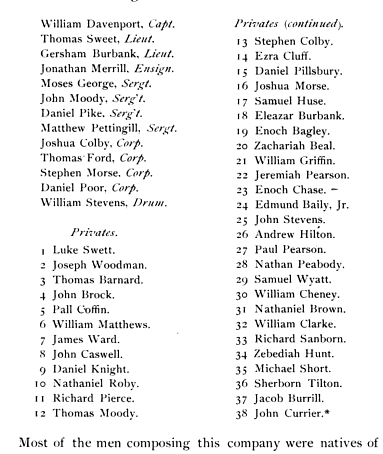