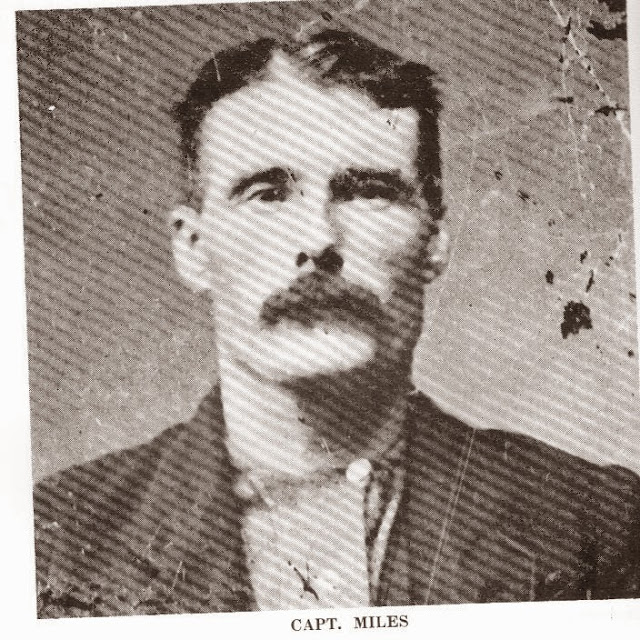 The day before the incident The Portsmouth Herald printed "the drowning season is at hand" (July 16 1902) Picture from Saturday, July 19, 1902 Paper: Boston Herald (Boston, MA) Page: 12 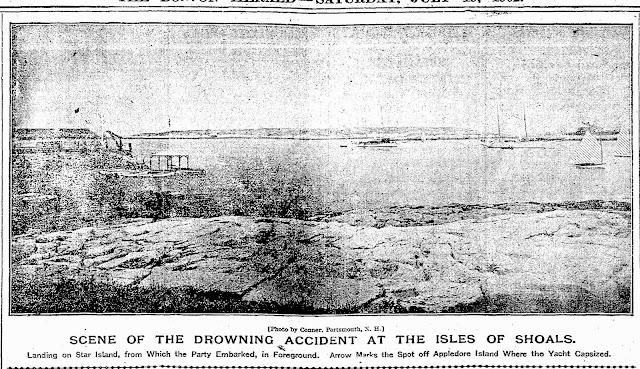 From A chronicle of the history of the Shoals with many photographs from a former UNH Special Collections librarian Rutledge, Lyman V. The Isles of Shoals in Lore and Legend. Barre, MA: Barre Publishers, 1965; Boston: Star Island Corporation, 1971. Also see Vaughn Cottage 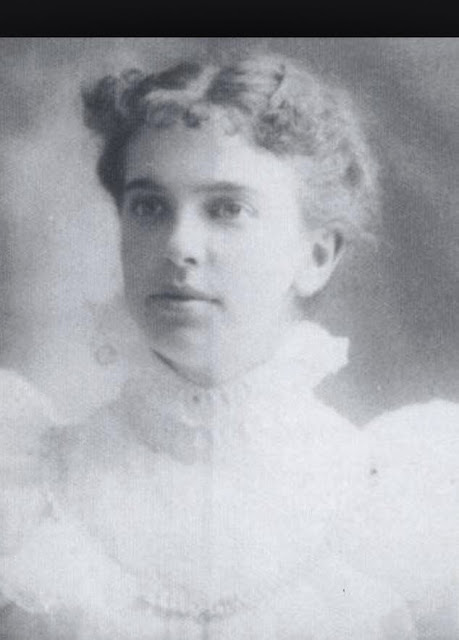 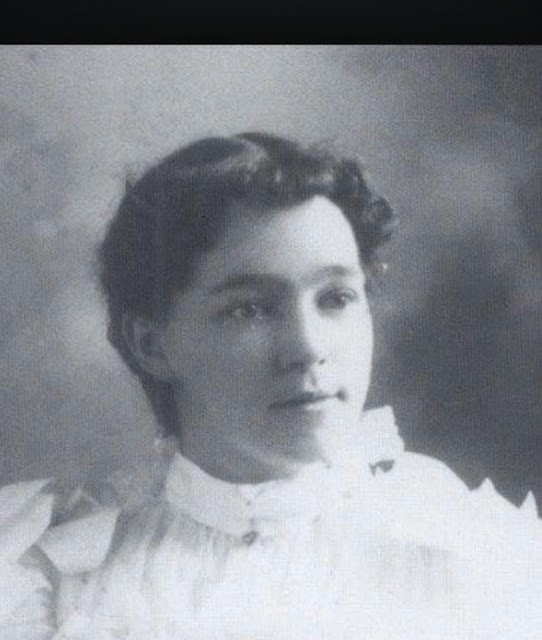 Captain Frederick Miles, a local fisherman, (age 48) who resided with his wife and eleven children at 2 Hunkings Street, Portsmouth, had been engaged many seasons to take out sailing parties at the Shoals.  The summer of 1902 he was so employed by Mr. Charles J. Ramsdell, manager of the Oceanic Hotel on Star Island.  Miles operated an Ipswich Bay whale boat, well known locally as a reliable sailing craft for small parties.  The Ipswich Bay was usually about twenty feet long (one account says the Miles boat was only seventeen feet, but that is incredible) rigged with two masts and sails.  The loose footed foresail was somewhat higher and larger than the mainsail.  The boat was decked over bow and stern, and was heavily ballasted with stone and iron.  “There was room amidship for six or ten passengers– no more,” says an expert writing for the Boston Journal.  Miles had no record of accident or careless conduct, and Mr. Ramsdell had complete confidence in his ability and judgement. 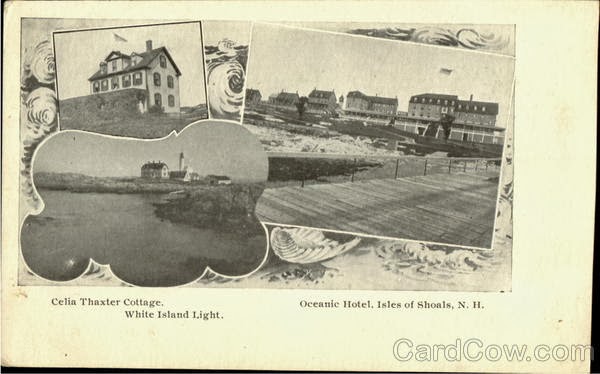 By his own account Captain Miles had taken out a small party which included Mr. Dingley, son of the elate Gov. Dingley of Maine, in the early afternoon, and on returning them to Appledore was handed a message informing him that a party was waiting at Star.  Mr. William Roger Greeley, a guest at the Oceanic says he was a member of the party which had just been out, and in a communication dated 1958 says “We were sailing in a whale boat owned and operated by local fishermen, when my uncle, Hon. George P. McLean, Governor of Connecticut, noticed a black cloud in the south and asked the ‘captain’ to make haste to the wharf to escape a squall.  He said there was no danger, but my uncle insisted.  As soon as we got out of the boat a party of fourteen or fifteen–the head waiter, a fine young college student, and a dozen or more waitresses got in over my uncle’s protest.” Mr. Greeley did not know, however, that five waitresses refused to go, much as they desired to join the party.  Ella Adams, Helen Twombly, Nellis Collins, Nellie Raitt and Hattie Gilmore stayed on the pier and watched the others sail off in gay laughter. Skipper Miles said, “I never sailed a jollier party than these young people…I said to them, “Where do you want to go, girls?” and they told me just to sail around the islands and not to go too far out.” There was brisk breeze from the southeast, so the Skipper headed northwest, intending to keep within the lee of the islands, and as he and came up the west coast of Appledore young Oliver Adams, brother of Ella who had stayed behind, and two other sisters who were on the boat, shouted and waved to turn back, but the party sailed on and cruised for nearly an hour to the north and east of Appledore. 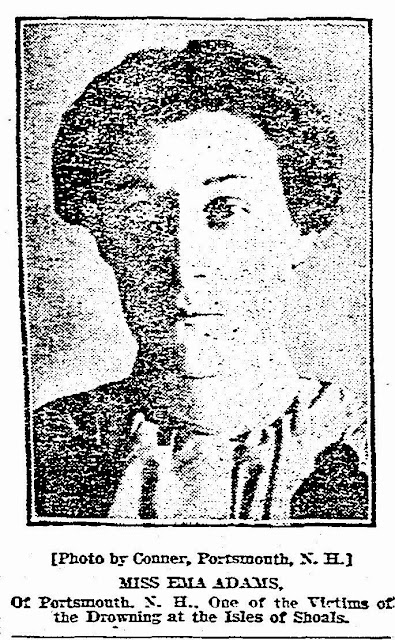 The Rev. Charles E. Park watched the whole performance from the piazza of the Oceanic, and after more than fifty years revived his memory of it in a note for our “Living History.” He says:
“A young fisherman had offered to take them for a sail; and probably it was up north toward Boon Island.  On their return they were surging merrily along, close-hauled on the port tack to a brisk southwest breeze.  The girls were all ranged along the port gunwale to offset the list of the boat….As they opened up the harbor between Appledore and Star, so they could see the steam-boat pier, there was the steamer just in, and bringing another batch of delegates.  Very soon they had to go about on the starboard tack in order to shoot up into the (Appledore) harbor.  This was just what the girls wanted, for now, with the boat listing to port they could all crowd over to the starboard side and get a perfect view of the passengers leaving the steamer, not 50 feet away.  And then it happened.  The boat slipped into the lee of the steamer; and wind pressure on the sail was cut off; the boat righted with a jerk, and because all the weight was on the starboard side, she kept right on listing to starboard until water was pouring, green and heavy, over the gunwale.  Being well ballasted to make her stiff when on the wind, she sank like a plummet.” 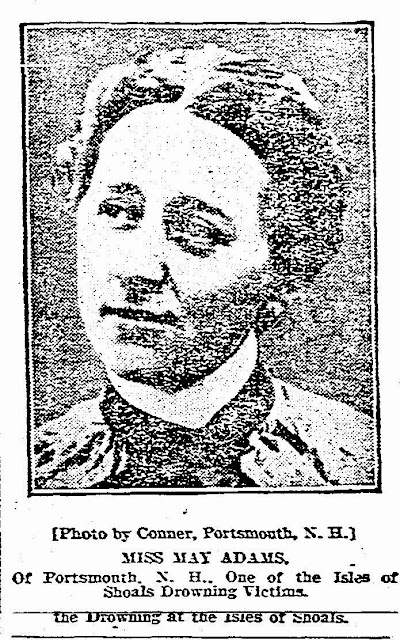 The Rescue: It seems from various descriptions that the entire list of seventeen, including the skipper were carried down by the suction of the rapidly descending boat.  No one was caught in the rigging, and no one fell beneath the hull.  The skipper said: “My god, girls, it’s all over–we are all gone!” I yelled; and that was the last I saw of any of the party.  As the boat sank we were all drawn under by the terrible whirl and suction, but as the craft struck the bottom the air in her forced me up to the surface again.  I presume that the others also came to the top of the water, but I did not see any of the party. I was down for more than a minute, I should judge, and when I saw blue sky was some distance from where we went under.  Luckily a large soap box which had been in the boat was floating by and I put my arms around it.  This was my salvation as I cannot swim a stroke, although I have worked on the water for more than thirty years.  I drifted shoreward and soon reached the rocks, which bumped and brusied me to some extent.  I was taken from the water in an unconscious condition by two fishermen and carried to the hotel.” Oliver Adams was first to reach the floundering victims.  He said: “Lemuel Davis and I were near the Appledore Hotel when the party started out, and we waved them to turn back, but the boat kept on.  They had been out about an hour when we saw the flaw strike the boat a good blow and over she went.  With all possible haste Davis and I ran to the shore and launched a dory.  The breakers were coming high and strong, but we got out there first.  Davis had the oars and I never thought we would get to the drowning girls.  It was an awful suspense.
“When we got to where she went down all were bunched.  I grasped two of the girls, not knowing who they were and rowed rapidly to shore.  I kept their heads out of the water as best I could, but it was a hard job to go through the breakers.  We were about fifteen yards from the shore wehn I was thrown out of the boat, but still kept my hold on the girls…After a time we succeeded in reaching dry land, and then we turned our efforts to resuscitating the two girls.  It was then for the first time that I discovered that one of them was my sister Ena.  I did not know that she was in the boat…After fully half an hour we succeeded in restoring Miss Haggerty… My sister was undoubtedly dead when she reached the shore…” “The last I saw of Alward and Farrington they were struggling and trying to hold several of the girls above water.  Both were expert swimmers, but they could not hold out in such a sea against the odds.” 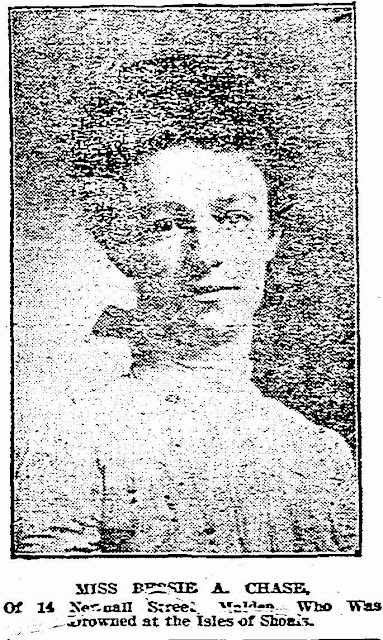 Steamer Sam Adams, which had just discharged her passengers at the dock now made for the rescue with only her Skipper, Charles Allen, and engineer, Peter Peterson aboard.  They threw a line to one girl who proved to be Lillian Bresnahan, and drew her aboard, but the second was too feeble to hold on, and sank.  Winds and waves were driving the steamer onto the rocks, so she had to pull away from shore, and rescued no others. By this time the waters were in tumult.  Fishermen from Star and Smuttynose came in doreis to join the frantic efforts of the Appledore boys.  These boats, bobbing like corks on the choppy sea managed to recover eight floating victims.  These were brought to shore where the whole population of the Islands was reaching out for them, and Drs. Warren and Richter were directing fruitless first aid.  The bodies were carried on cots to the music room of the Appledore Hotel, and placed in a silent row for identification by friends and relatives from Star– nine in all, five missing, somewhere under the still savage waves. Word had been cabled to Coroner Edward E. Shapleigh of Kittery and Undertaker H. W. Nickerson of Portsmouth who left Portsmouth at about 9:15 on the steamer Merryconeag.  After the bodies were identified they were carried on mattresses to the waiting Merryconeag and taken to Portsmouth where they were to be claimed by relatives. The next day (July 18) Michael E. Hurley was summoned to undertake the recovery of five missing bodies.  He assembled his own diving equipment and early Saturday morning, with John Ford of Dover as tender, went down to explore the ocean bed.  He found the whale boat intact, and announced that Skipper Miles had not been at fault in handling his sails.  Some had said he failed to free his sails in making his tack, and it was a tight sail which caused the boat to capsize, but Hurley found no tight sail.  One at a time he discovered the sunken bodies, at a depth of about sixty feet, but it was not until the next afternoon that all had been recovered.  Some faces were still recognizable, but others had been disfigured by the ravages of fish.  All were taken to Portsmouth to join their silent companions, and wait to be taken home. Guests at both hotels asked for no service on the evening of the tragedy.  Appledore recovered more quickly after the last victim had been taken to mainland, and the seas were calm once more.  But the Oceanic could not be reconciled.  Guests came from their rooms next morning in silence and seemed confused as they entered the dining room where only a handful of waitresses with haggard faces were there to serve them.  Out of twenty-two, sixteen were absent, fourteen never to return to their accustomed places.  Orders were given with choked voices if at all.  Many had no heart for eating but would rise without words and return to their rooms.
Days passed and new hands came to serve, but memory lingered long over those dark hours. Dr. Park speaks for them all in his later review: “You say, why begin your reminiscences with so sad a story?  Had you been an ardent Shoaler at that time could you have forgotten it?  Could you have attended a single session for the next fifty years without at least once during the week recalling that fearful tragedy?” Picture from Harvard Crimson Article H Coleman Farrington 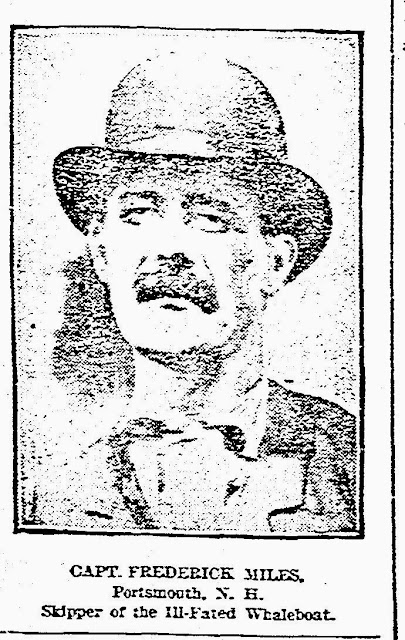 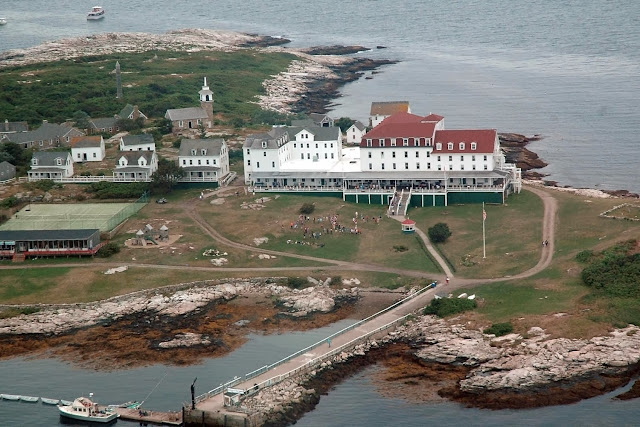 Posted by Melissa Davenport Berry at 5:53 AM