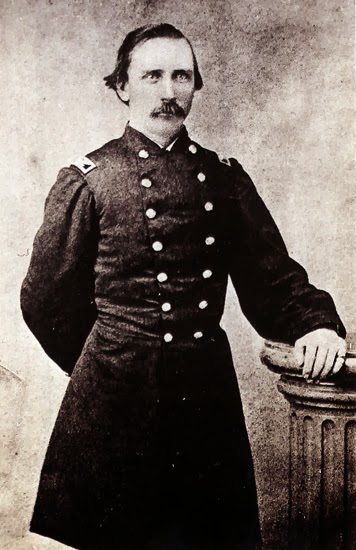 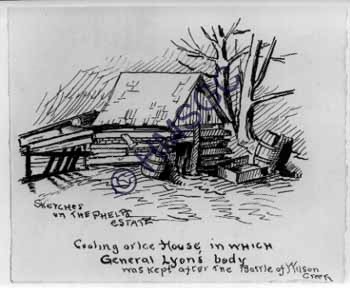 John S. Phelps was a U.S. Congressman from Greene County and Missouri governor (1877-1881) and served as Union military governor of Arkansas from July 1862 to July 1863.
White River Valley Historical Quarterly  Volume 35 , Number 2 , Fall 1995
In the spring of 1861, John E. Phelps, a native of Springfield, Missouri, at that time twenty-two years of age, furnishing his own horse, accoutrements, arms and rations, served as a Union Scout and guide in South Western Missouri and Northern Arkansas.

He was a secret agent of General Nathaniel Lyon from the commencement of his campaign in South Western Missouri to the death of that gallant officer on the battle-field of Wilson Creek, August 10, 1861. On leaving Springfield for Wilson Creek, during the night before the battle, General Lyon ordered young Phelps to remain at Springfield. There he remained until morning but when he heard the sound of cannon showing the fight was on, he galloped to the front taking with him a colored servant, a farm hand and a home guard, all well mounted but unarmed except himself. Striking the advance of Price’s Army upon the wire road, he captured the first two pickets and rushing upon the next pickets captured one of them and compelled the picket guard, consisting of Lt. J. D. Kelly and six men of Range’s [James S. Rains] Confederates to surrender. He armed his little squad with the weapons of the prisoners and guarded them to the rear of the retreating Union Army. Here he compelled the prisoners to dismount and placed from one to three wounded Union soldiers upon each captured horse thus enabling them to escape. The prisoners themselves were marched to Springfield and turned over to Provost Marshal Boyd. He had thus, unaided by anyone with arms captured ten Confederates with their horses and arms, taking from Lt. Kelly alone, two revolvers, a double barrelled shotgun and sabre.

He continued to act as scout and guide performing much dangerous service, requiring both daring and endurance, riding at one time 126 miles in 24 hours. He was in the advance in the movements of the Army of the Frontier under Gen. S. R. Curtis and on February 17, 1862, by order of Gen. Curtis was detailed as acting volunteer aid upon the staff of General E. A. Carr, then in command of a division. In this campaign, culminating in the Battle of Pea Ridge, his dauntless courage, quick perception, and untiring energy found full scope.
Near the close of the Pea Ridge Battle he was wounded in the leg compelling him to return home.Photo from Missouri History Museum John E. Phelps 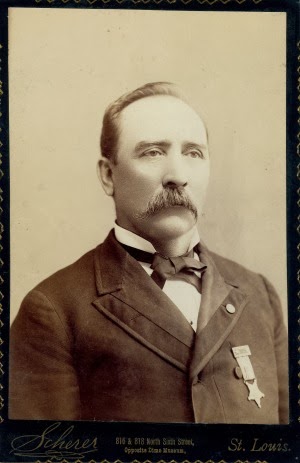 On June 11, 1862, Phelps was appointed a Second Lieutenant in the Third U. S. Cavalry and assigned to duty by the war department upon the staff of Gen. Carr.

Up to this time he had served without commission or pay from the government. He reported to Gen. Carr at Helena, Arkansas, in July 1862, and served on staff duty until June 1863. Then, completely worn out with the hardships and his restless activity in the Vicksburg campaign, and prostrated with the malaria of the southern swamps, he was ordered to Missouri as the only chance to save his life, though even then he made a personal appeal to Gen. Grant to let him remain to witness the surrender.

While still home on sick leave, he recruited a regiment of Cavalry, and without calling upon the government for the expenditure of a dollar, enrolled 1200 men and had them mustered into the service of the United States as the Second Arkansas Cavalry. He was mustered as Colonel March 18, 1864.

This was a regiment of "Rough Riders." It was composed of Mountain Federals from the Ozark Mountains of Missouri, and the Boston Mountains of Arkansas, plainsmen from Texas, Choctaw and Cherokee Indians, southern refugees, deserters and prisoners from the Confederate Army, while several of the officers were taken from the Northern regiments. Most of these men were experts in the use of firearms, thoroughly at home in the saddle, brave and reckless, but raw and undisciplined. Led by Colonel Phelps, on march and scout and skirmish, in the charge and on the battleline they showed great endurance and exhibited the most desperate courage until "Phelps Guerrillas" became known as the most daring fighters in the South Western Army. By order of the War Department the names of six battles were placed on the colors of the regiment--Jefferson City, Boonville, Independence, Big Blue, Osage and Newtonia.

After eight months of active service in Missouri Continued Gen. Phelps was ordered to Memphis, Tenn., with his command. He rode out ofSpringfield, Missouri, December 14, 1864, and arrived at Memphis January 25, 1865. This was a wonderful march of over 400 miles through the enemy’s country in the dead of winter without a tent, and was accomplished with the loss of only one man.
He was mustered out with his regiment at La Grange, Tennessee, August 20, 1865, and September 28, 1865, resigned from the regular Army on account of sickness resulting from the privations of the service. Precious few Phelps family documents have been preserved. Readers may examine a few in the John Elisha Phelps Collection, Western Historical Manuscripts Collection, University of Missouri-Rolla. They are located in Room G-3 of the main library in the center of the campus. 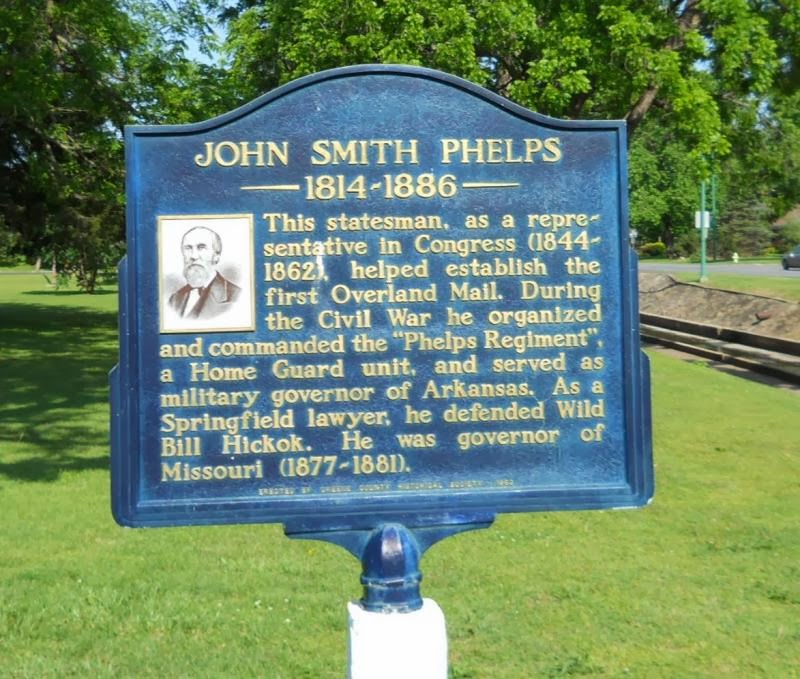 On the Federal or Union side, there were but few men who took a part, although back at Springfield stood at least 1000 men ready and eager to rush to the assistance of Lyon and Sigel at any stage of the fight, from the crack of the first musket to the time when Dubois exploded his last shell. With Sigel were the Union guides, C. Baker Owen, L. A. D. Crenshaw, John Steele and And}' Adams, and with Lyon was Pleasant Hart, E. L. MuElhany and others, but perhaps none of them fired a gun. The rumor goes that a few over-zealous Union men slipped out with the 1st Kansas and took a hand on their own hook, but if this bo so, their names have not been learned.
From History of Greene County, Missouri
Early on the morning of the battle, John E. Phelps (son of Col. John S and afterwards a brevet brigadier general), armed with a Maynard rifle and a Colt's dragoon revolver, set out from his father's house, south of town, for the fight. Accompanying him was one of his father's slaves, a negro man named George, another negro, Amos, belonging to Maj. Dorn, of the Southern army, and Pleasant Hall and Robert Russell, two young men, citizens of the county. Phelps was the leader. Taking the Fayetteville road, the party encountered Lieut. Morton, of the 2d Kansas.

The squad, now numbering six, hurried along, as the firing began, and pretty soon encountered a picket of two men. Leaving the others to attract their attention, Phelps contrived to make his way to the rear of these pickets, and coming upon them suddenly, leveled his "Maynard" and soon had them prisoners. The party then rode on. and soon encountered another picket. Employing the same tactics as those used at the former post, Phelps succeeded in capturing a mounted arsenal in the person of a State Guard lieutenant of McBride's division, named Kelly, who had three or four revolvers, a doublebarreled shot gun, and a heavy dragoon saber.

Buckling on the saber himself, Phelps rode up near the battlefield and encountering a party of Confederates induced a negro, belonging to an officer of the Louisiana regiment, to ride out to him, when forcing the negro to follow, and keeping him between the enemy and himself, Phelps retired in good order! Nearer still to the battlefield, and at Ray's house, a good-sized squad, was encountered in the house and taken in. Here the correspondent of the New York Tribune, one Barnes, who had been with Lyon, came up. To his paper, Barnes wrote: —

'* I now determined to cross the creek, and see if I could find Col. Sigel, as a report reached us that he was entirely cut to pieces. • • * I had not proceeded far on the eastern side of the creek, when I met the son of Hon. John S. Phelps, who had left town upon hearing the cannonading, with but a few troops, and, not, discerning the exact positions of the two armies, had busied himself taking prisoners on the Fayetteville road and west of it. When I met him he had captured near a dozen, including a negro belonging to an officer in a Louisiana regiment. Placing them upon the trail for our guards and in charge of a Kansas officer, Phelps and myself proceeded, but found it unsafe to attempt to cross the Fayetteville road, and, seeing the army retreating, we joined them and returned to the city. 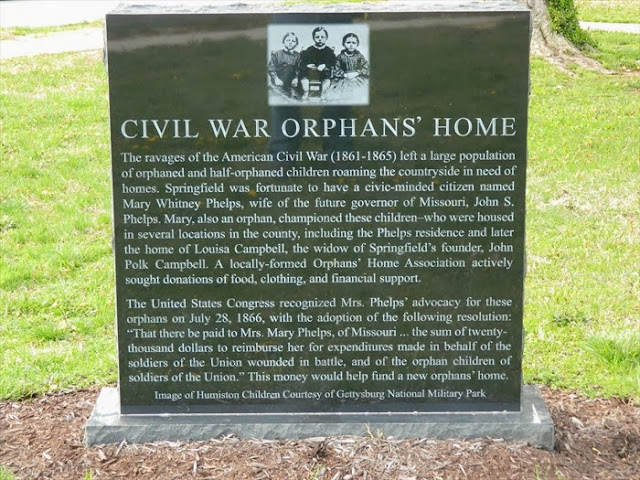 More Info
Posted by Melissa Davenport Berry at 7:28 AM