For New England Phelps Group and those researching Phelps line

Info from "The Phelps family of America and their English ancestors, with copies of wills, deeds, letters, and other interesting papers, coats of arms and valuable records" by Oliver Seymore Phelps
Americana, Volume 13

Captain Henry Phelps*, son of Henry Phelps, was born in 1745, and died in 1786. He was united in marriage with Betsey Herrick, of Beverly, Massachusetts. In October, 1786, Captain Phelps was lost at sea. When all hope of being saved had been given up, he wrote a letter to his wife, describing the terrible situation, and, sealing it in a bottle, cast it forth upon the waters. It was picked up by a Boston vessel, and forwarded to his wife, who, from the contents, learned the sad fate of her husband.

Some time after it was picked up by a Boston vessel and so reached Mrs. Phelps. This letter is now in the family. We are indebted to Mrs. E. C. Poland of Wakefield, Mass. for the following copy of same.

My Dear Wife:—As I fear this will be the last you will hear from your unfortunate husband, I would inform you that I sailed from France, the 27th of Aug. I had nothing but bad weather. I lost half of our water, and head of my bow spirit with jib and jibboom twelve days after starting. I fell in with a French Vessel in Latitude 48 who gave me about twenty pounds of beef and pork, the bread was all shared. The bearer of this I hope wil! spare me some provisions. I do not know what I shall receive from him. (Note— Mr. Wakefield says, "It is supposed a Vessel was sighted and they hoped to be rescued. The Boston Vessel that picked Up the bottle knew nothing about the wreck.) The 24th of Oct. we shipped a Sea which took off our quarter sail and stauchels and left nothing above my deck. We have at present nothing but our three sails to set. God only knows if we ever meet again. I would advise you if you can, to get Henry through his learning. (Note by Mr. Wakefield "Henry was then in Harvard College.") What little remains of the property is for you to use if you want it, and what you can spare for my dear little sou David. Grief stops my pen. Adieu my dear wife and children. Hoping we shall meet in Heaven. We have been on allowance sixty days and now we are very short. Two of my men are sick and we are almost discouraged. Once more Adieu, my dear wife and children. From your loving husband, Henry Phelps."

Extract from Salem Gazette, 4 April, 1782: Ship "Exchange," Capt. Forester and brig. "Revolt," Capt. Phelps, both belonging to this Port are taken and carried into New York.

Extract Salem Gazette, 9 May, 17X2: Sunday, May 5th, 1782, Capt. Phelps came to Salem from New York, "who was lately taken iii a brig belonging to this Port." He left New York on the Monday preceding, and brought with him considerable news.

Extract Salem Gazette, 20 Jan., 1787: A letter from a gentleman in the West Indies to his friend in Portsmouth says: " I supplied a Vessel belonging to Beverly, Henry Phelps, Master, with a small quantity of provisions, 12 Nov., 1786, in Longitude 52 West. Am afraid if he did not get into Nova Scotia he must have perished. He was 76 days from Isle of Ree and almost a wreck."

Below is an article Capt Phelps captured by Brits "Revolt" 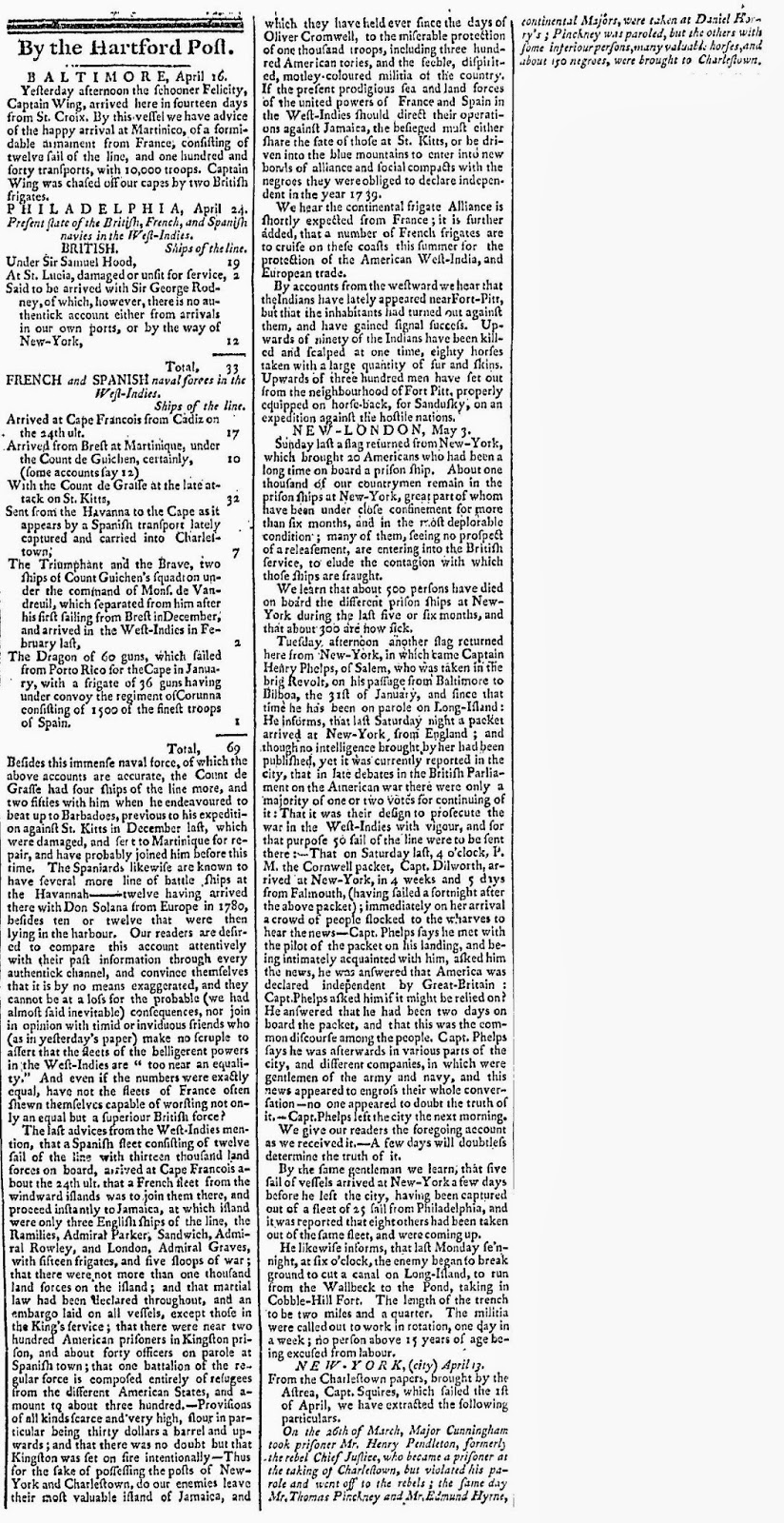 Posted by Melissa Davenport Berry at 7:09 AM