He left his pipe in Newburyport

by Jack Garvey Columnist Leader of AISI Newburyport News He has been a street-piper in Newburyport since 1982, performing on the Inn Street Mall and Market Square as weather allows. He can be reached at hammlynn@yahoo.com  Pictures added by Melissa Berry 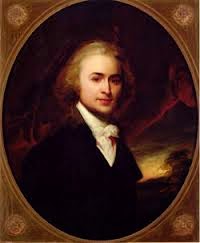 “You will never know how much it has cost my generation to preserve
your freedom. I hope you will make good use of it.” ~John Q Adams

Our Newburyport Public Library once “entertained” three Revolutionary heroes and the infamous pair of Benedict Arnold and Aaron Burr.

Unlike the other five, the younger Adams lived in Newburyport, an apprentice for over two years to Theophilus Parsons, an architect of Massachusetts’ Constitution and later Chief Justice of the Commonwealth.

Adams was engaged to local girl Mary Frazier until her parents broke it off because they thought he had no prospects.

Perhaps the Fraziers worried over one of Adams’ youthful pastimes. When he arrived here in 1787 as a 20-year-old Harvard grad, he brought with him a musical instrument:

Adams’ biographer says he “fell in with a circle of fiddlers and flautists,” frequently playing in public houses, most often the legendary Wolfe Tavern—a tradition now carried on every Wednesday evening and many Sunday afternoons downtown in the Port Tavern.

But there’s no mention of music by the time Pres. Madison sent him to Russia. As minister to Czar Alexander, Adams redeemed himself from a failed stint as a US Senator.

“Failed” is a relative term for a legislator who backed Jefferson’s embargo against an England that mocked our independence with the “impressment” of American sailors into the British navy.

The embargo cost Massachusetts manufacturers dearly, and just as today, putting principle ahead of economic interest was political suicide.

America’s Revolution needed a second act. To win the War of 1812, Adams wrote accords in St. Petersburg and Ghent well before January, 1815, when Andrew Jackson fired that gun and the British kept a’comin’.

Like father, like son: In separate acts each played a lead. The younger Adams’ triumph was gaining Russia’s alliance. Following Napoleon’s retreat from Moscow, England had to accept that a very powerful friend had our back.

Adams’ redemption came when Pres. Monroe made him secretary of state. According to Monroe’s biographer, Adams wrote “the core provision” of the Monroe Doctrine “ending foreign colonization in the Americas.”

A Boston newspaper dubbed Monroe’s two terms “The Era of Good Feeling,” but friction between North and South ended that by the time Adams defeated Jackson—and Henry Clay—in the 1824 presidential race.

Obstructed from the start by a bitter and ambitious Jackson, Adams’ one-term presidency was hardly the stuff of Mount Rushmore.

Old Hickory’s supporters termed Adams’ appointment of Henry Clay as Secretary of State “The Corrupt Bargain,” a theft of the election.

Thus began a four-year smear campaign. Like then, like now: Claims that Adams used prostitutes to strike an alliance with Russia and secure the Treaty of Ghent were as foam-mouthed as “death panels” and “Obamunism” today.

The treaty thus discredited, their slogan for 1828’s rematch gained traction: "Adams who can write, or Jackson who can fight?"

Undeterred, Adams then served Massachusetts and the abolitionist cause for 16 years in the House of Representatives, waging a long and successful war against a “gag order” preventing any discussion of slavery in Congress.

His 1841 victory in the Supreme Court would inform the 1997 film, “Amistad,” with Anthony Hopkins in a penetrating turn as Adams.

Only a stroke on the House floor could stop him. He was 80.

If another Rushmore commemorated work after leaving the White House, Adams would have the peak to himself with Taft, Hoover, and Carter candidates for the nearest ridge.

A new book, American Phoenix, details the roles of John Quincy and Louisa Adams in gaining the Russian alliance, an account owing much to Louisa’s diary.

An active diplomat in fact if not name, Louisa rivals the more celebrated Abigail for prolific and insightful accounts. Like mother, like daughter-in-law.

They all kept voluminous diaries, but after Adams’ Newburyport years none, not even his own, ever mention that flute.

At the time, Adams reported that the “fiddlers and flautists” went on “frolicks” to the homes of young women—Rebecca Cazneau, Sarah Wigglesworth, Elizabeth Coates, and a "Miss Fletcher.”

Serenades through the windows.

And so the sixth president of the United States was a street piper.

A page of flute music copied by John Quincy Adams when he was studying the flute during his student days at Harvard University (1786-87).

American Phoenix: John Quincy and Louisa Adams, the War of 1812, and the Exile that Saved American Independence (2013), Jane Hampton Cook

Ecstatic Nation: Confidence, Crisis, and Compromise, 1848-1877 (2013), Brenda Wineapple. Long introduction makes a convincing case that JQA’s funeral was a landmark event in American history, his death a turning point in relations between the North and South.

Profiles in Courage (1955), John F. Kennedy. An account of JQA’s support of the Louisiana Purchase and Jefferson’s embargo against the wishes of New England Federalists, especially merchants, is the first of this book’s eight chapters.

For a richly detailed and most engaging biographical sketch of Theophilus Parsons and for a history of the Wolfe Tavern, see www.ancestoryarchives.blogspot.com and type the names into “search site.” Kind thanks to fellow As I See It columnist Melissa D. Berry for these leads.
Posted by Melissa Davenport Berry at 2:57 PM