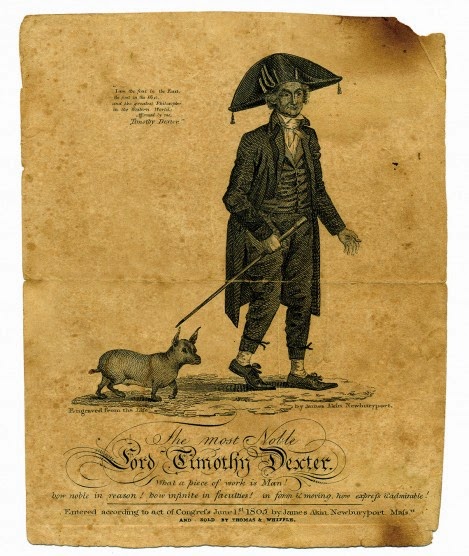 Also check out The New Yorker  article written  Philip Hamburger, A Reporter at Large, “ACROSS THE BOARD WITH LORD TIMOTHY DEXTER,” The New Yorker, June 21, 1947, p. 30
The Olden Time Series, Vol. 6: Literary Curiosities, by Henry M. Brooks
The following is a notice of a "distinguished merchant" and "literary" character of Newburyport, Mass. In the appendix to "Lord" Dexter's great production—where all the stops are placed together on the last page, so that "people can salt and pepper as they please"—we find these lines:
"All men inquire, but few can tellHow thou in Science doth excel!"
Timothy Dexter. The subject of the present sketch, according to his own account, was born in Malden, Massachusetts. "I was born," says he (in his celebrated work, "A Pickle for the knowing ones"), "1747, Jan. 22; on this day in the morning, a great snow storm in the signs of the seventh house; whilst Mars came forward Jupiter stood by to hold the candle. I was to be a great man."

Lord Dexter, after having served an apprenticeship to a Leather dresser, commenced business in Newburyport, where he married a widow who owned a house and a small piece of land, part of which, soon after the nuptials, were converted into a shop and tanyard.
By application to his business his property increased, and the purchase of a large tract of land near Penobscot, together with an interest which he bought in the Ohio Company's purchase, afforded him so much profit, as to induce him to buy up Publick Securities at forty cents on the pound, which securities soon after became worth twenty shillings on the pound.
His Lordship at one time shipped a large quantity of warming pans to the West Indies where they were sold at a great advance on prime cost, and used for molasses ladles. At anothertime, he purchased a large quantity of whalebone for ship's stays; the article rose in value upon his hands, and he sold it to great advantage.
Property now was no longer the object of his pursuit; but popularity became the god of his idolatry. He was charitable to the poor, gave large donations to religious societies, and rewarded those who wrote in his praise.
His lordship about this time acquired his peculiar taste for style and splendour; and to enhance his own importance in the world, set up an elegant equipage, and at great cost adorned the front of his house with numerous figures of illustrious personages.

By his order, a tomb was dug under the summer house in his garden, during his life; which he mentions in 'A Pickle for the knowing ones,' in the following ludicrous style:—
"Heare will lie in box the first Lord in Americake the first Lord Dexter made by the voice of hampsher state my brave fellows Affirmed it they give me the titel and so Let it goue for as much as it will fetch it wonte give me Any breade but take from me the Contrary fourder I have a grand toume in my garding at one of the grasses and the tempel of Reason over the toume nand my coffen made and all Ready I emy house painted with white Lead an side and outside touched with green and bras trimmings Eight handels and a good Lock, I have had one mock founrel it was so solmon and there was so much Criing about 3000 spectators I saymy house is Euqal to any mansion house in twelve hundred miles and now for sale for seven hundred pounds weight of Dollars by me   TIMOTHY DEXTER."
Lord Dexter believed in transmigration sometimes; at others he was a deist. He died on the 22d day of Oct. 1806, in the 60th year of his age. 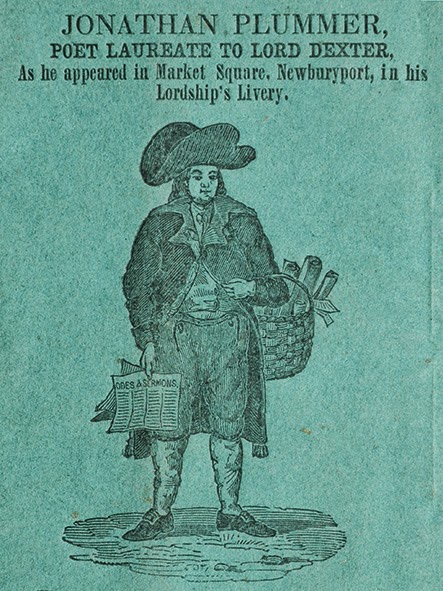 Salem Observer, Dec. 17, 1825.
From what we have heard and read of Mr. Dexter, it is a matter of surprise to us how such eccentricities could have attracted the attention they evidently did. It is doubtful if so much folly and conceit could now interest many people for any length of time.
Boston Paper 1859 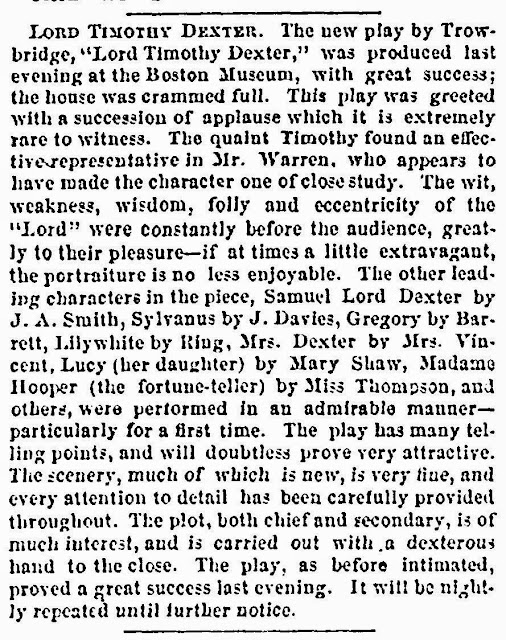 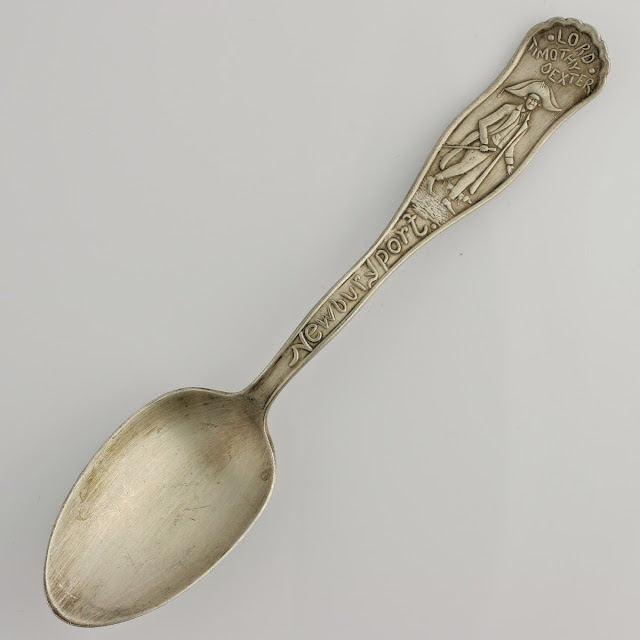 Newburyport has a peculiar design for its spoon, being no more nor less than the representation of “ Lord” Timothy Dexter, accompanied by his dog, taking a walk, with the word “Newburyport” down the handle, while the back displays a half-opened wartning pan. As the object of these spoons is to lead to research, investigation, and the study of local history, the reader who is not familiar with the relations of Lord Dexter and warming pans to the history of Newburyport may as well begin here to study.