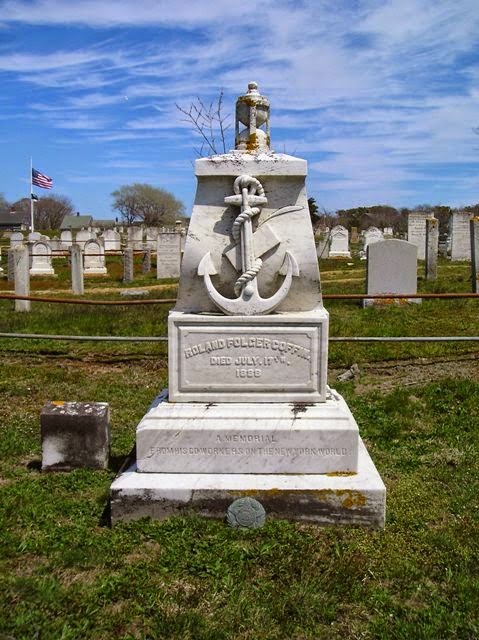 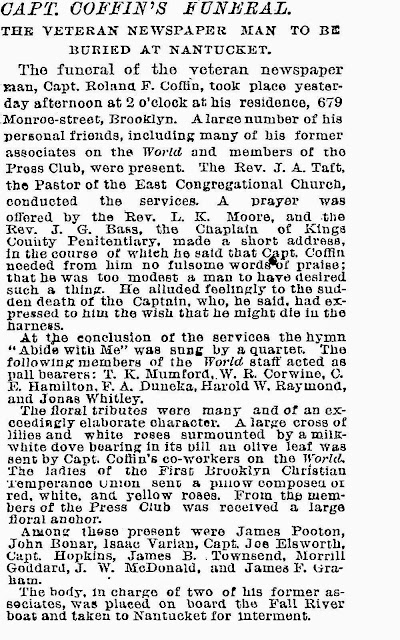 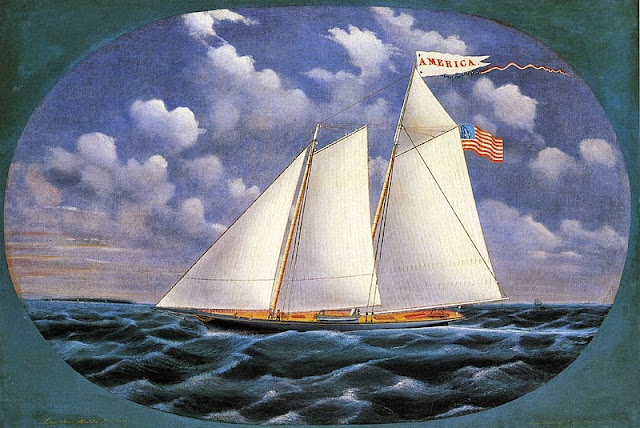 Captain Coffin---journalist, was born in Brooklyn, N.Y., March 8. 1826. He spent his youth at Nantucket, Mass., and became a sailor. He was captain of the ship Senator, 1850-60, and in the latter year joined the U.S. navy as acting master, serving in the North Atlantic blockading squadron. 1861-63. In 1869 he published .1n Old Sailor's Yarns. He became a reporter of marine news and yachting and was a contributor to the daily New York journals. He published Straws (1859); The America's Cup: How it was Won by the Yacht America in 1851 and has Since been Defended (1885); History of American Yachting (1886). He died on Shelter island. Suffolk county, N.Y.. July 17, 1888 See More "Proceedings of the Nantucket Historical Association," Volumes 21-25

From  Outing: Sport, Adventure, Travel, Fiction, Volume 12
As we go to press, we learn with profound sorrow of the death of Capt. Roland Folger Coffin, our highly esteemed yachting editor. Captain Coffin died in harness; he was at the time fulfilling his duties as yachting reporter to the World and Outing.

Alas ! the pen of Captain Coffin lies silent now. Little did we think then that the articles he brought us, three days before the end came, would be the last precious gifts of this prolific marine writer, and that OUTING inherited in these contributions the most mature thought of Roland Folger Coffin.
In this and the remaining numbers of this year's OUTING these valuable articles will appear, and no one who ever " broke the unknown sea " and trusted his life "to the licentious winds" will pass these pages by. The closing article will be enriched by a short but exhaustive sketch of Captain Cofiin-a man who was born near the sea and.....

Grave Lot 136  Captain Roland Folger Coffin. March 8, 1826 - July 17, 1888.
Roland was the son of Hezediah Coffin and Sally Bunker Coffin. He married Elizabeth Starbuck the daughter of Captain Obed Starbuck. He was master of the ship Senator. During the Civil War, he served in the U.S. Navy in the North Atlantic Blockading Squadron. He was a reporter for The New York World and a yachting reporter for the sports journal Outing. Captain Coffin was the author of  An Old Sailor's Yarns published by Funk and Wagnells, New York in 1884 and The America's Cup. How It Was Won By The Yacht America In 1851 And Has Been Since Defended published by Charles Scribner's Sons, New York in 1885. In the preface of the later book ,Captain Coffin writes of his ambition:
"Retire to Nantucket, and become a happy owner of a twenty-foot cat-boat, the fastest in the harbor".
Captain Roland Coffin's co-workers at The New York World purchased his memorial at Prospect Hill as a tribute to their departed friend.
Posted by Melissa Davenport Berry at 8:35 PM