The Gerrish Boys of Maine 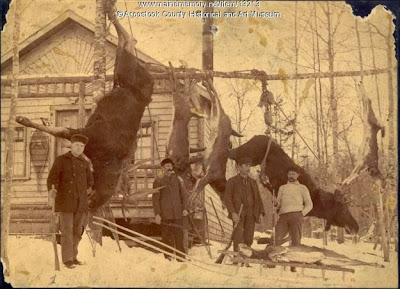 A photo taken in front of Gerrish's Hunting Camp at North Twin Dam. Luther Morrill Gerrish operated the camp. From Maine Memory Network
From The Bay State Monthly There is a famous camp near North Twin Dam, (Photo from Chesuncook Village Association) kept by Luther Gerrish, and in front of it the accommodating conductor will bring the train to a stop for passengers to alight. A low log structure is the camp, but roomy and comfortable, standing on an elevation overlooking South Twin Lake, with Katahdin looming up in the northwest. Its guide proprietor will greet you with a friendly shake of the hand and a twinkling eye. He has bidden many people welcome to his forest home; and now that the railroad passes his door he begins to feel the need of enlarging his quarters. Often in the fall, passengers on the trains see the front of the camp fairly covered with deer hung up around the piazza awaiting shipment. The camp is in the center of the most famous region for big game in New England. What luck sportsmen had here in the shooting season of last year — October, November and December — is indicated by the shipment of carcasses from Norcross, the shipping point for the region. 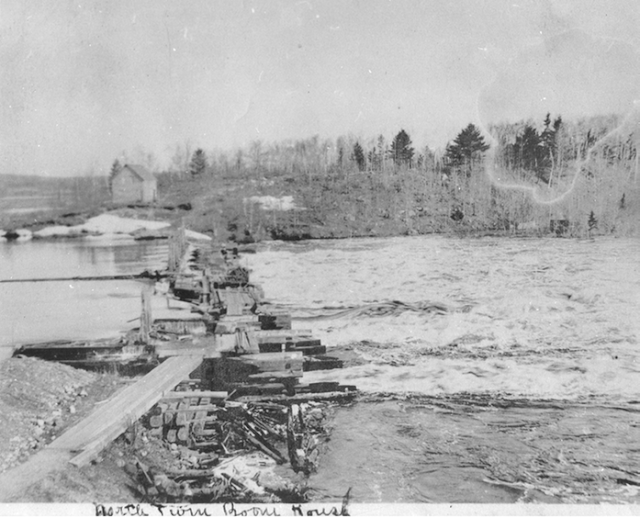 From all the stations on the Bangor and Aroostook road there were shipped in the three months named one thousand and one deer, fifty caribou and forty-five moose, and these did not represent fifty per cent of the number killed or one hundredth part of one per cent of the number running wild in the district. In fact, big game seems to be increasing there, in spite of sportsmen. Deer are so plenty and so tame, that a number have been killed on the tracks this year by the engines; and hardly a day passes but passengers on the trains catch glimpses of them in the woods. Not long ago a buck brought a train to a standstill by rushing under a car platform and setting the brakes by getting entangled in the air hose. His carcass was hoisted into the baggage car, and the train proceeded. 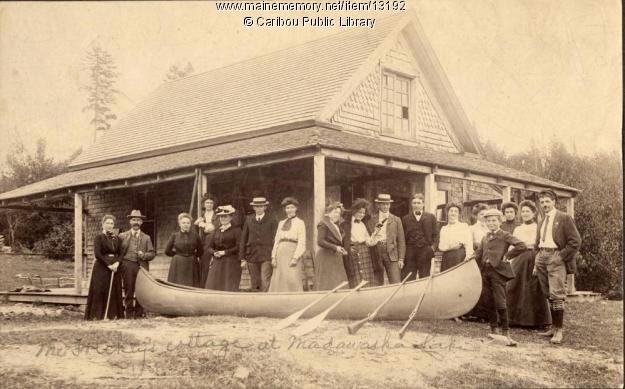 The fisherman finds no less delight than the hunter in this region of the woods. Trout fill the streams and lakes, and seem waiting to be caught. There is no end to the devious waterways one may enter in quest of fish or in pursuit of the exhilarating sport of canoeing in that wonderful land of lakes and streams. The famous Bangor canoes, light, buoyant, tight craft, made of canvas and light wood and finished with some sort of enamel that makes them snag-proof, are found everywhere here. The sportsman is indebted to E. H. Gerrish, a brother of Luther Gerrish, and no less skilled than he as a guide, for these remarkable boats. In twenty years' experience as hunter, trapper and guide in the Maine woods, Mr. Gerrish formed the ideas which resulted in the production of the canoe which is now found in all the lakes and streams of northern Maine, and is becoming known all over the country. Check out Bangoreans loved sailing and paddling canoes made locally 19th C. photograph of a 30 foot Gerrish canoe by Wayne E Reilly and Facebook page E H Gerrish Canoes 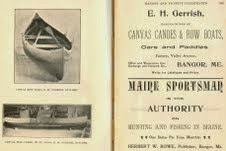 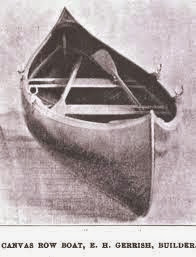 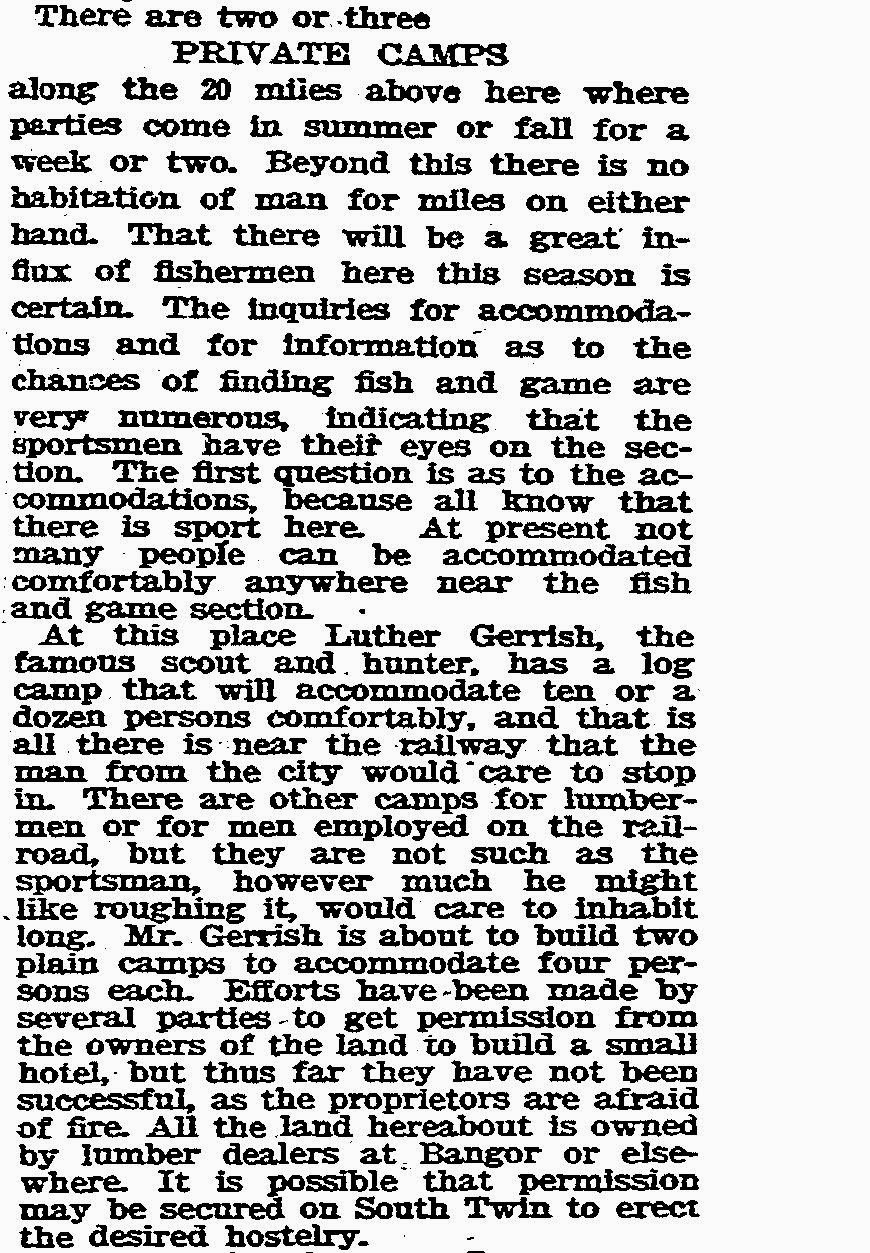 Possible Tragedy.
Luther Gerrish, of Norcross, one of the oldest and wealthiest guides in Maine, has had two or three perilous encounters with the ultimate Lucifer, all of which have ended happily. A few winters ago, he started through the Aroostook wilderness to look out a route for the new railroad to Ashland. C. P. Treat, a contractor, of Chicago, and Joe Abbott, a civil engineer, of New York, were with him. They struck in on the Allegash, and were snowshoeing through the woods toward the headwaters of the St. John's, when a sleety rain storm came on, compelling them to make camp. The streams were so badly swollen after the rain that the party walked a long way into the hills before they made an attempt to cross.
When a few rods from the shore, Mr. Treat went waist-deep into ice-cold water, and in trying to get him out, Abbott and Gerrish were wet through. The storm had cleared off cold, with a northwest wind that sent the thermometer down to zero, and kept it there. Though it was twenty miles to the nearest camp, the iceclad men pushed on, hoping that brisk walking would warm them up. In crossing another stream, all three of the men were soaked to their armpits, and before they had gone a mile Mr. Treat wanted to sit down and rest. His feet were cold, he said, and he was sleepy, though a short nap would make him all right They dragged him along a few miles, and then Mr. Abbott gave out and wanted to sleep. Gerrish knew what these symptoms meant, and saw that they must stop and build a fire or all would perish.
When he had stripped the men's feet and wrapped them in comforts and mittens, he collected some dry wood and dead brush for the indispensable fire. He was pretty blue when he put his hand in his hip pocket and pulled out a bunch of matches that were water-soaked, and was not overcheerful when he found but three matches in his waistcoat. Abbott, who was a good woodsman, insisted on kindling a fire, saying he had steady nerves and could make one go the first time. Then Mr. Treat insisted on his rights, so it was agreed to divide the matches equally and give every man a trial. To Mr. Treat, as the millionaire of the party, was given first chance. His match blazed up finely until caught by a gust from Alaska, when it went out before half burned. Abbott lighted a shred of birch bark with his match, but the bark curled up with the heat and extinguished the blaze before he could undo the coils.
It was now Gerrish's turn. He knew what would happen if his match failed to go. Treat and Abbott would certainly freeze to death, and the new railroad would be held back for years. The prosperity of half of Aroostook county, the life of a man who was worth $10,000,000, as well as the lives of Abbott and himself, all depended upon a little slip of wood not so big as a restaurant toothpick. He piled up the brush about him so as to make a green tent surrounding the heap of wood, and lifting a loose bundle of dry pine needles and shredded birch bark in one hand, he scratched the match, and holding it vertically until the blue blaze was climbing the stick, gently shoved it inside the bundle of tinder.
He fanned it slowly with his breath for a moment, and when he saw forks of flame through the white smoke the dry wood was torn apart and filled with the precious fire. New sticks were placed on top until the flames climbed the wooden bowlder. When he turned to look at Treat and Abbott, both were sitting with their faces covered. They, too, knew the meaning of the last match and could not look at him. If they must freeze to death, they preferred to do so fancying they were sitting before a fire. When Gerrish told them to sit over so the fire would not burn their clothing, they laughed like two boys who had just holed a fat woodchuck.—Chicago Journal.
See also Source:
Modern Maine: its historic background, people, and resources, Volume 4
Posted by Melissa Davenport Berry at 12:55 PM