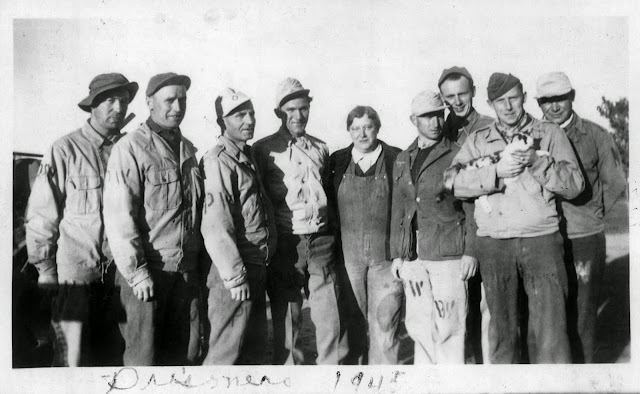 A Share From Leigh Cummings Historian and David Greenham from the Holocaust and Human Rights Center located at UMA New Exhibit looks at the little-known story of Maine P.O.W. camps

AUGUSTA - The Holocaust and Human Rights Center (HHRC) of Maine has created an exhibit focusing on the history and artifacts from Maine’s P.O.W. camps between 1944 and 1946. The exhibit, Maine Boys Overseas, German Boys in Maine, brings together artifacts, historical documents, and a film from a variety of Maine sources.
In early February, 1944, Maine Second District Congresswoman Margaret Chase Smith revealed that the War Department had made plans to send German prisoners of war to Maine to work on lumber projects. A month later, Senator Ralph Owen Brewster announced that 2,500 German POWs had been assigned to Maine and would be housed at a camp near the Houlton airfield, and possibly other locations. With that, a little-known chapter in Maine history began. 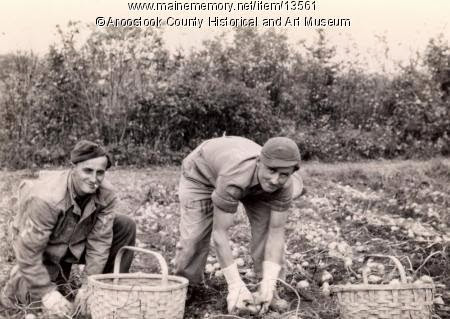 The HHRC exhibit, Maine Boys Overseas, German Boys in Maine, brings together artifacts from the POW Camps at Houlton, Spencer Lake, Seboomooc, and Princeton/Indian Township, along with ten remarkable WWII posters from the Maine State Museum and documents from the National Archives for this one-of-a-kind exhibit. 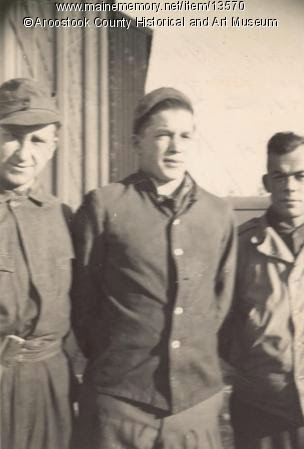 The exhibit was created with the help of the Aroostook County Historical and Art Museum; the Jackman Historical Society; Brenda Jepson; researchers and writers Bill Randall, Jocelyn Gray, and the late Milton Bailey; the Maine State Museum; Simons’ Photographic; the Folger Library at UMO; the Maine State Library; the Grand Lake Stream Historical Society; the Maine Folklife Center; Yankee Magazine; Northeast Historic Films; Paul Marcotte and Sons; and the facilities staff at UMA.
Maine Boys Overseas, German Boys in Maine is open daily Monday through Friday from 10 am – 4 pm, and by appointment through November 30th. Admission is free, although donations are gratefully accepted. The exhibit is suitable for all ages. For more information, call 621-3530 or visit hhrc.uma.edu. 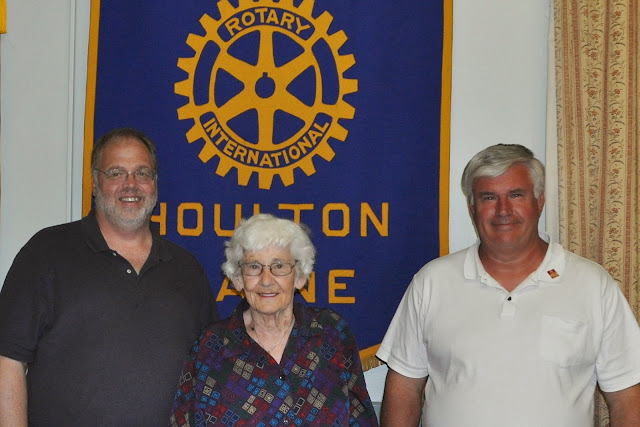 David visited the Houlton Historical Society and Art Museum after the meeting. He was very impressed with the community and the items on display related to the POW camp. They are planning on an exhibit open in early September and run through November at the University of Maine at Augusta. David also met with Kay Bell a local resident with first hand experience of the POW prisoners, as they worked on her family farm picking potatoes. At this time Kay’s brother_____ was killed in Germany. David would like to use many of the Museums and Kay’s items for the exhibit.

Many Rotarians shared their stories with David and he was very interested in learning more about the effect of the POW camp had on our local community. Some of the comments made were
“I remember asking my mom why do they look just like us?”
“I recall picking potatoes with the prisoners and they were required to pick only 20 barrels a day and they would sometime finish in the morning. My family would bring cookies for everyone picking and they loved that and then they would help with the loading of the barrels even though they did not have to.”
The meeting was very interesting and informative, thank you to all that shared stories.

Photo German POW potato pickers from the Houlton camp are pictured in 1946with Nancy Robinson McLeod at her farm in Dyer Brook.
Photo courtesy of Aroostook County Historical and Art Museum
Holocaust and Human Rights Center of Maine
Posted by Melissa Davenport Berry at 5:12 PM