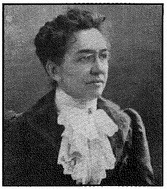 She was a member of the First Presbyterian Church, the Eastern Star, the Tioughnioga Chapter of the Daughters of theAmerican Revolution, and the Twentieth Century Club. Along with three other ladies, she raised funds to start Cortland’s first hospital and served on its board of lady managers. She was also an organizer of the Red Cross in Cortland and was a life member of the Gideons (providers of Bibles to hotel rooms). See "BURIED TREASURES" COLUMN" by Steve Sbelgio. Read Full article at Cortland Rural Cemetery
The 1899 Grip’s Historical Souvenir of Cortland recounts her business successes as “proprietor of patents known as Cately Carriage Attachments” and also describes her as an “active, shrewd, and enterprising business woman.” 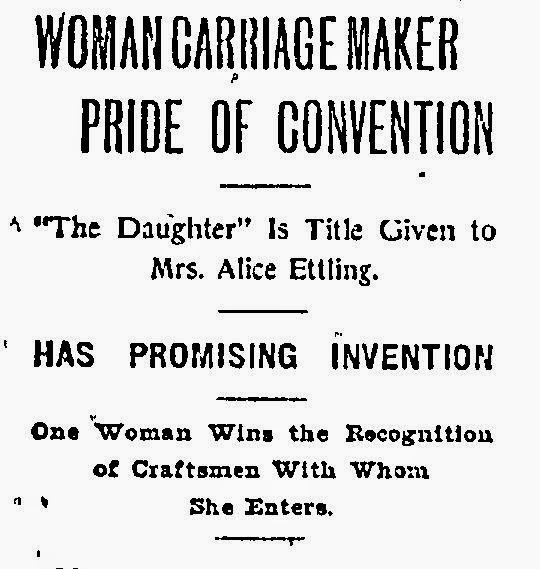 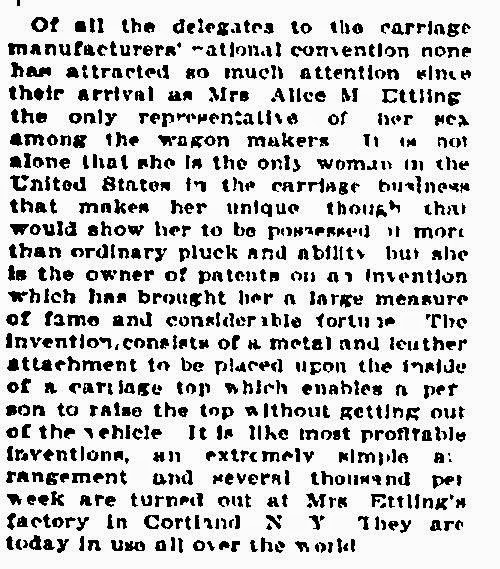 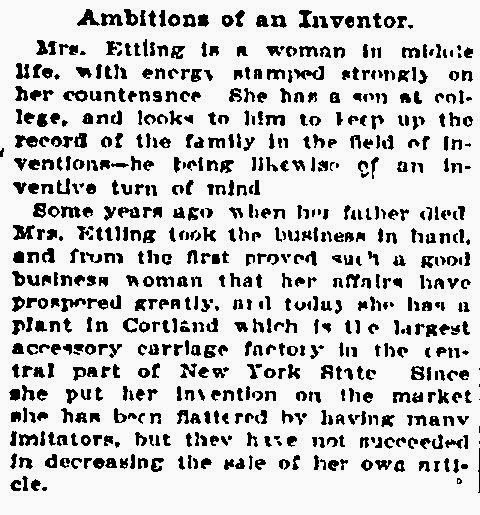 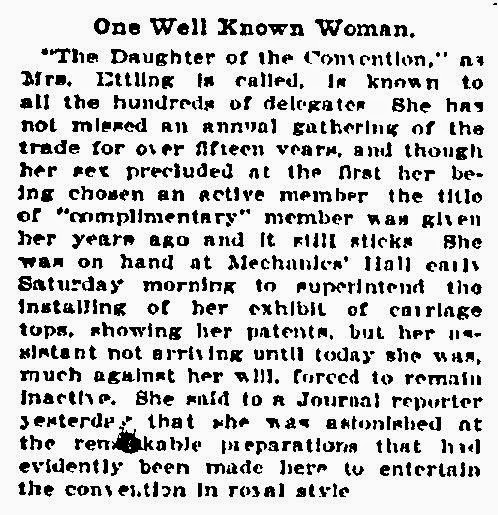 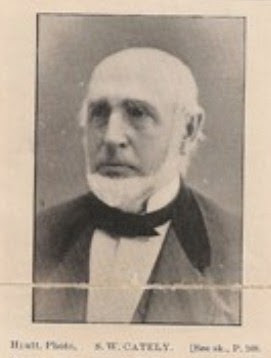 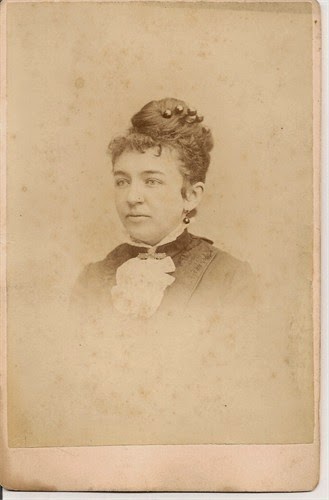 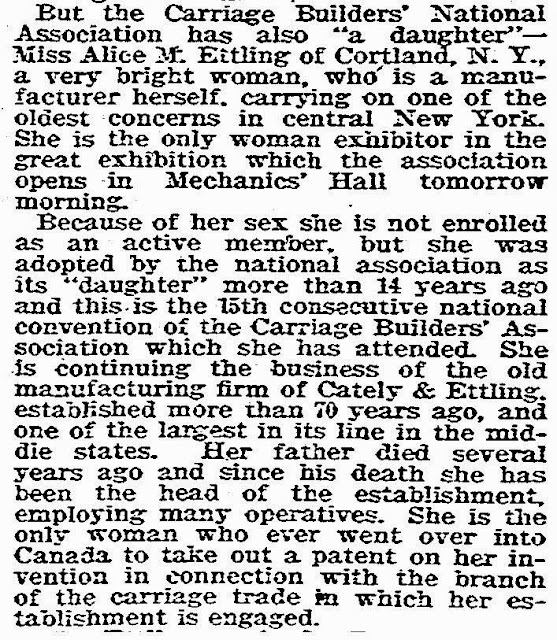 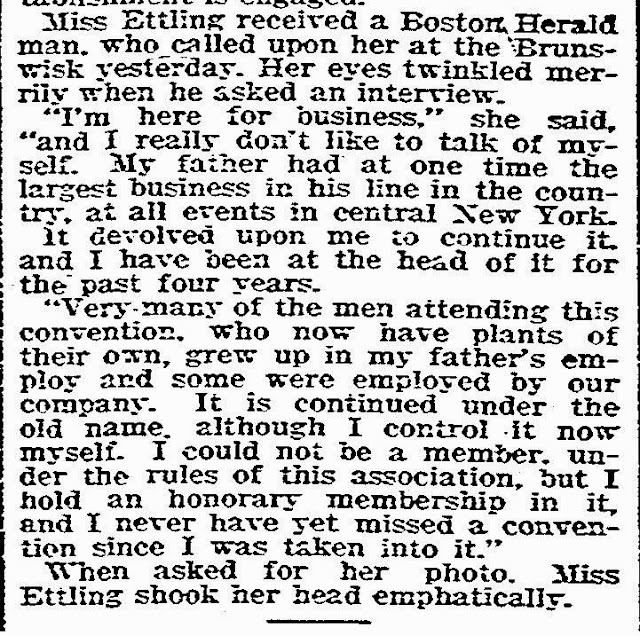 From The Blacksmith & Wheelwright, Volumes 45-48
These are manufactured by Cately & Ettling Cortland NY whose new advertisement appears in this issue of The Blacksmith and Wheelwright By the use of these springs there is a complete prevention of broken bows bent seat rails or rattling Joints. The Cately springs are placed upon each arm or rest, operating upon the outside joint, to counterbalance the weight of the buggy top when it is desired to be raised or lowered. They are made from the best quality of steel spring wire, specially tempered. and covered with double-thick patent leather; and, when in position, do not differ in appearance from the regular prop-block used on buggy tops.
Some of the advantages of these springs are as follows: They are so durable that they will outlast any buggy top. and can be readily attached to old or new work; they do nine-tenths of the work of raising the top; are a complete anti-rattler for the top joints; remove the strain largely from the wooden bows and prevent them from breaking or bending; they will add many times the cost of the springs to the value of the top, as they increase its durability so largely.
Cately's top levers, used in connection with the Cately springs, give the occupant of a buggy complete control over the top, as it can be lowered or raised instantly from the inside. The safety and convenience gained by such a contrivance are too obvious to need elaboration here. The repair man who applies the Cately devices to an old buggy top makes it virtually a new one-—in some important respects better than a new one could possibly be without these improvements. The carriage builder who puts the Cately attachments on all his Jobs always pleases customers, and it is no wonder that an enormous sale has been found throughout the world for these springs and levers. A sample set of Cately springs will be sent to you for fifty cents, and the same price for the Cately levers. In sending for samples or descriptive circular address Cately & Ettling, Cortland. N. Y., and 49 fail to mention "The Blacksmith and Wheelright."

From Lineage Book - National Society of the Daughters of the American Revolution Volume 49
Also see Cortland County book has a great picture of her and the chapter members Descendant of Lieut Joseph Moore Josiah Moore and Lieut Ephraim Middlebrook. Daughter of Shepherd W Cately and Maria Moore his wife Granddaughter of John Moore and Mary L Middlebrook his wife. Gr granddaughter of Josiah Moore Jr b 1765 and Abigail Dewey his wife John Middlebrook and Polly Rachel Beach his wife. Gr gr granddaughter of Josiah Moore b 1737 and Anna Gillette his wife Ephraim Middlebrook and Elizabeth Munson his wife. Gr gr gr granddaughter of Joseph Moore and Elizabeth Allyn his wife Joseph Moore 1712 90 who was lieutenant in the early wars gave service in the Revolution from New Windsor where he was born and where he died His sons Joseph Elisha Asa Abijah and Josiah served in the war Also Ephraim Middlebrook 1736-77 was killed while serving as lieutenant of his company at the battle of Ridgefield under Benedict Arnold 1777 He was born in Stratford Conn
Mrs A Ettling of Cately & Ettling Cortland NY writes to THE SPOKESMAN that she is preparing to close out the business something that will be regretted by their hosts of customers throughout the country Mrs Ettling has always been a familiar figure at the Annual CBNA Conventions having attended twenty eight consecutive meetings of the organization always exhibiting their line of buggy top springs and levers and roller chafe irons.
Article from Boston Herald September 1903 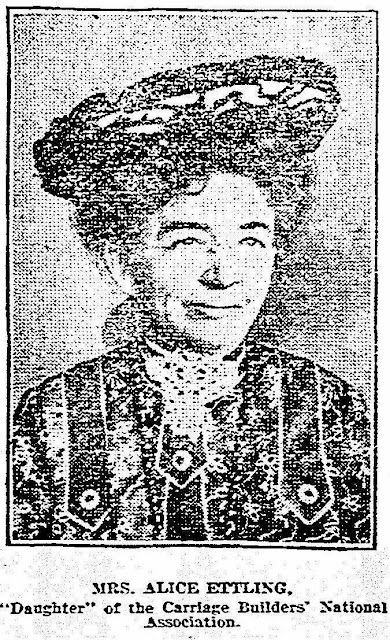 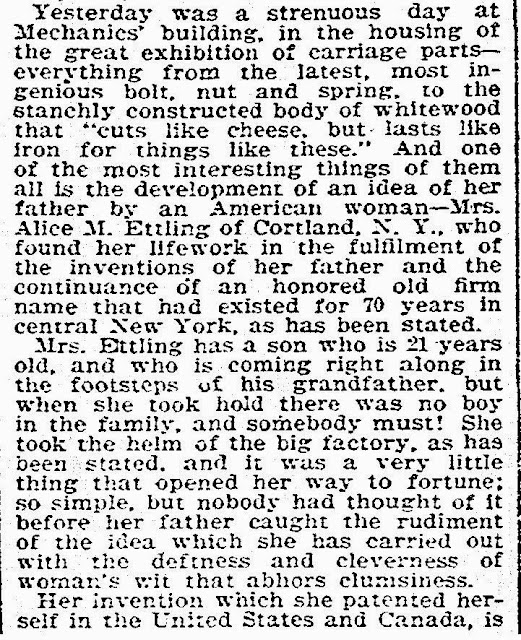 From Body, Paint, and Trim Magazine Volume 43
On June 19 at Providence RI the home of the bride's parents will occur the marriage of Henry Cately Ettling Cortland NY and Miss Ethel Louise Carpenter Providence. The bride is the charming daughter of Mr and Mrs Christopher Carpenter and has a host of friends in Providence The groom is a member of the well known firm of Cately & Ettling manufacturers of buggy top springs and levers at Cortland and a son of Mrs Alice M Ettling whose father was formerly identified with this company Mr Ettling is popularly known to the trade as Harry Ettling and will be the recipient of many hearty congratulations from his scores of good friends Mr and Mrs Ettling will go to housekeeping at Cortland after a short honeymoon 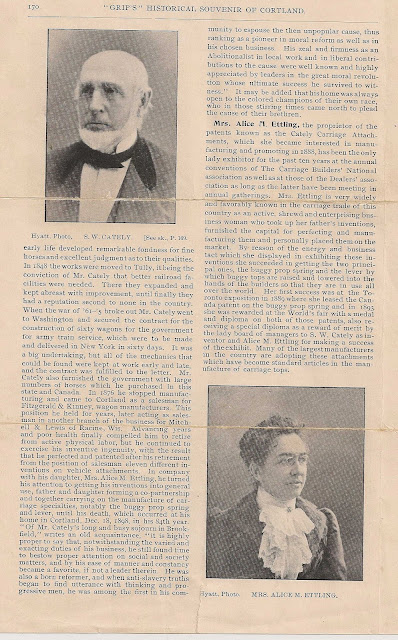 Posted by Melissa Davenport Berry at 8:36 AM