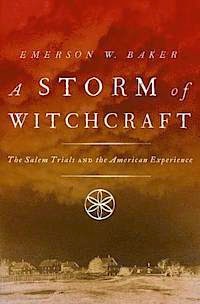 Emerson “Tad” Baker offers a fresh perspective on the 1692 Salem witch hysteria in his new book “A Storm of Witchcraft: The Salem Trials and the American Experience.” Baker is creating a buzz and # 1 on the Barnes and Noble list for Hot Colonial reads.
What tempest of dark forces brewed in Salem Village? Baker asserts it was a culmination of climatic events just waiting to unleash its fury. When you mix a small pox epidemic, crop failure, Native raids, frontier wars, a government upheaval, Puritan oppression along with three decades of bad blood squalls you have a perfect storm.
According to Baker, these combined threats convinced Puritans authorities that God had frozen them out. By 1692 the chilly atmosphere in Salem was more like a medieval waste land than a New Jerusalem. The elitist ice den pressed for more frigid conditions hoping to purge evil, but as Baker will show it ended their icy reign.
What makes Baker’s story stand out from the “crowded field” of other scholars is his focus on the family relations. Although past authors have dismissed the significance of genealogical research, Baker asserts it is essential. It helps the reader understand the human behavior of the colonial clans, as well as the actions of the courts. It also outlines the Puritan mindset.
As noted by the editor, Baker will “awaken your primal emotions with the personal accounts.” He probes deep into psyches exposing raw emotions such as fear and jealousy which help trigger the hysteria. He also addresses the patterns of friction and tension among the society.
Peg Plummer, a Mayflower descendant loved the “added complexity of the family connections of the accused, accusers and judges.” Plummer says that her interest in genealogy made her “appreciate Baker’s detailing of the close-knit group of the judges and admits it must have been hard to disagree with a colleague if he’s also your brother-in-law, fellow merchant and Governor’s counselor.”
The pedigree profile Baker outlines on each judge will show a collective force of opportunist merchants and ministers entering into strategic marriages. Baker divulges their methods of ferreting out devilish dissenters and provocateur parishioners before and during the trials.
Rev George Burroughs would be trapped in the turbulence even after a geographical relocation. Was this Harvard educated minister really contaminating his congregation with Satan’s black arts? Or, was he like John Alden possessed by the spirits of the open frontier? Alden was accused of bewitching soldiers and being in league with the enemy Pagan Natives. Baker defines the “perfect witch” as one who had problematic histories due to political, religious, and military conflicts. They were “part of Satan’s grand collation bent on destroying Puritan Massachusetts.” .
Baker demonstrates how festering feuds among relations, neighbors and court officials would play a part in the witch hunt. The Bradbury line had a long history of strife with those on the bench and pulpit. Additionally, there were Quakers in Mary’s line and her husband had shown public sympathy toward the sect as a court official.
Rebecca Nurse stood charges for tormenting a neighbor who was trying to settle a score and was also under suspicion for having harbored the children of The Southwick family who were Quakers.
Many of the accused would be targeted for Quaker associations. In fact, Baker will offer many accounts to show how victims fingered for witchery had relations who suffered the Quaker persecutions. The judges who ordered the gallows executions are the sons of the judges who whipped and branded Quakers.
Jason Starbuck Morley, a direct descendant of Quaker Thomas Maul says the book “is an outstanding new addition to the trove of scholarship on the 1692 Salem Witchcraft Hysteria and by far the best account he has read on the subject.” Morley further adds: “Although I have collected dozens of books on the trials, this is far and away the best account I have read on the subject. Unlike other histories, his account includes a comprehensive background on the Salem/Puritan community out of which the trials arose. Baker has added a new dimension to the story of 1692 by placing in within the context of Salem, itself. The book touches on Salem’s Quaker community, the effect of wars on the Maine frontier, economic crises, political upheavals and the peculiar social relations found in a Puritan community. Although comprehensive in scholarship, it remains highly readable; thus making it a superb contribution to the body of scholarship on the Trials.”
Heather Wilkinson Rojo, historian and author of the Nutfield Genealogy blog also has several ancestral ties to the early Salem community and notes: “As a genealogist, this is fascinating stuff and Baker succeeds in telling the “whole story with all flesh on the bones.” Rojo further adds, “While most of the other accounts just focus on one or two angles of the story, Baker really covers it all--before, during, and after.”
Rojo also shared that after hearing “A Storm of Witchcraft” lecture she was captivated by Baker’s theory on how the Salem Witch trials were one of the first governmental “cover up stories” in American history. The Puritan government tried to cover up all their mistakes made in the trials to the English authorities, and to the people themselves. They also tried to preserve their tentative hold over the people with the inter-related judges, magistrates and ministers.
Despite the fact the actual court records were not released to the public until 1979, Baker presents several examples of how “Witch City Salem” is very much alive in memory. His work will offer each “throbbing heart” in the experience and readers will appreciate why generations of descendants like Benjamin Franklin and Thomas Jefferson “have dedicated to the proposition it must never happen again.”
More coming on AnceStory Archives
Please visit Baker at www.salemstate.edu/~ebaker and look for his feature Salem End: The Diaspora That Followed the 1692 Witchcraft Crisis in “ American Ancestors” magazine this month.

Posted by Melissa Davenport Berry at 9:47 AM