A Reversal of Fortune made Coachman a Millionaire 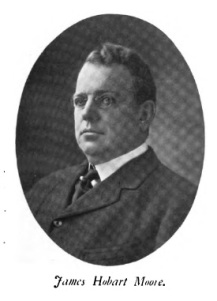 When the magnate financier James Hobart Moore son of Nathaniel Ford Moore and Rachel Arvilla Beckwith departed this earth July 17, 1916 the public learned that the wealthy tycoon had a very tender affection for those who were in his service. Although Moore’s generosity was well known by a multitude of charitable donations, it was the deep pockets of gratitude to one coachman that make this millionaire magnet stand out.
William Beattie, coachman for James H Moore was more than happy to clean out his bank account when Moore’s credit was over strained. Moore took a hit when his Diamond Match Company crashed and drained all his funds–he became a pauper over night.
Beattie came to his rescue Moore tells the Christen Journal.  “I was in an awful fix,” said Moore  and “I was worth less than nothing when Beattie came to me. He went to the bank and withdrew all his savings, $2,000.”
Beattie said “Take it…I got it from you and you’re welcome to keep it as long as you want it.” Moore accepted the sum and never forgot this kind gesture which served him through the crisis.
When Moore made his next round of millions he paid Beattie–so richly that the coachman was worth over $100,000.
The Sabath Recorder Volume 82 noted: “In these days of cold commercialism it is refreshing to see this instance of a servant’s fidelity and an employer’s gratitude. We find it hard to tell which is worthier of praise, but taken together these two give us the ideal relation of employer and employee sealed by mutual respect and loyalty. If this spirit might be universal our industrial world we should be nearer the millennium”
St. Paul wrote of sanctifying this common but high relationship: “Servants, be obedient to them that are your masters . . . with good will doing service. . . . And ye, ‘masters, do the same things unto them” (Eph6: 5-8).—Christian Herald
In his will Moore had left this bequest: “To William Beattie $10,000.” Despite his windfall Beattie remained coachman for widow Moore. According to the newspaper articles published after Moore’s funeral Beattie invested in a Tennessee plantation.

Brewster Records: The original Gig owned by James Hobart Moore housed at his summer mansion on Geneva Lake in southern Wisconsin. The Carriage Journal, fall 1995 references Moore’s many carriages and residence. Frey Carriage Company
article is a photograph of Mr. Moore driving what appears to be a Geneva Lake that could very well be this vehicle. 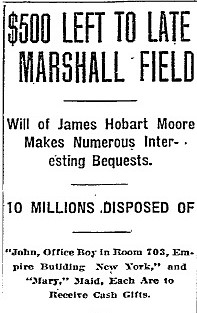 James H Moore left many more who where in his service $500 Let to Late Marshall Field. Will of James Hobart Moore Makes Numerous Interesting Bequests. He owned United States Steel, and also had a hand in the founding of the Nabisco corporation. Moore's brother and business partner was William Henry (Judge) Moore who married sister to James' wife Ada Small Moore. James H Moore married Lora Josephine Small, daughter of Edward Alanzo Small and Mary Caroline Roberts--d. of Benjamin Roberts & Clarissa Mitchell; George Roberts & Hannah Davis; Joseph Roberts & Ruth White; William White & Christian Simonton; John White & Lucy Wise; John Wise & Abigail Gardner; Joseph Wise & Mary Thompson; John Thompson & Alice Freeman.
Ada and Lora were members of the Daughters of the American Revolution and Society of Colonial Dames. Mother, Mary Caroline Roberts Small and sister Joanne Small Moore were also members. Daughters of the American Revolution Lineage Book Volume 14 List Lora Small Moore (Member 3968) Ada Small Moore (Member 3969) Descendant of Corp. Edward Small, of Maine. Daughter of Edward Alonzo Small and Mary Caroline Roberts, his wife. Granddaughter of Edward Small and Rebecca Pratt, his wife. Gr.-granddaughter of Edward Small and Sarah Mitchell, his wife. Edward Small, (1751-1826), was detailed to work on 'the Fort at Falmouth, 1775. He served as corporal under Capt. John Wentworth and Col. Aaron Willard, at the alarms, 1777. He was born at Scarborough and died at Freeport.
Rachel Beckworth daughter of George Beckwith; Carolyn Ford daughter of Nathaniel Ford and Caroline Reese; Lucy Churchill daughter of Samuel Churchill and Elizabeth Curtis.
There is also Mayflower Ties:
A business profile from 1921 noted that if the Moore brothers “had been the owners of Aladdin’s lamp, they could not have transformed defeat into victory more magically.” Hebert Casson in “Harvest of Gold,” The Romance of Steel and Iron in America,” noted the during fallow times the Moore boys never sweat the small stuff: “With cheerful indifference they had made and lost millions. Having promoted the Diamond Match Company, they went down with it when it foundered, losing four millions or more. In a single year, by floating the National Biscuit Company and the American Tin Plate Company, they paid their debts and had millions left.” In “Prominent and Progressive Americans,” a synopsis of their reputation and notoriety. “Do you know Moore Brothers?” a Chicago business man was asked. “Who does not” was his reply. “Their vast and successful operations are the wonder of the business world.” The tribute was none too high for a firm that, after being caught in one of the most overwhelming panics of modern times, within a year paid off, in full, debts of more than $4,000,000, and continued in business with a clean record, a big bank-account, and the unhesitating confidence of the community. However, the Judge had more than the Midas touch. He possessed a formidable, independent spirit, known as “Yankee Iniquity.” His instinct to succeed was bred in him from the sturdy stock of his Mayflower ancestors. Mrs William Henry Moore Massachusetts Mayflower Society Member Number 2753.

After James Moore's death Lora married Harry French Knight, a stockbroker. The Knight’s were prime financial backers of Lindbergh’s flight across the Atlantic.

Son of James Moore and Lora—Nathaniel Ford Moore (1884-1910) featured in the Book of Sport. Nathaniel was a champion golfer 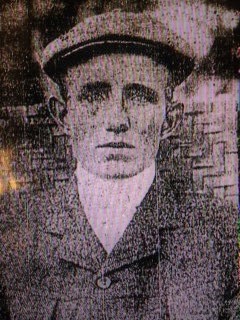 Posted by Melissa Davenport Berry at 9:33 AM