For my Phelps Genealogy Group and check out Sweet Brook Farm still operating today. From American Journal of Numismatics, Volume 44 The newspaper reporters have given us the following interesting item, under date of October 24, instant: —
Coin Made In 1652 is Found In Field.

Cassius Daniel Phelps, a South Williamstown merchant, while plowing a field, found one of the rarest of American coins, a Massachusetts Pine Tree Shilling, for which he has refused 5300. It is one of the first coins which was minted in the Massachusetts Bay Colony and is dated 1652, thirty-two years after the landing of the Pilgrims at Plymouth. There are only two others like it in existence, and neither is as good a specimen as this one. One is owned by a Boston collector and cost him $212, and the other is owned in Albany, and no price will be placed upon it. Before accepting the reporter's estimate of its value and rarity it will be best to wait for a further description of the piece. From the price named, it has been suggested by a correspondent, that it is perhaps an impression of the so-called "Good Samaritan " piece, one of which, in the Parmalee collection, was sold in June, 1890, for $210. As no "Pine-tree Shilling," so-called, has ever brought so high a price, the suggestion seems probable.
In this connection we may note that there is a good deal of uncertainty about the history of the "Good Samaritan shilling." Dr. Green, in the Journal—then one of its editors— VII (1870): p. 40, said that the original was "undoubtedly the work of some English apothecary, who without any special object in view, stamped the piece with his trade-mark. It is figured in Felt's Account of ' Massachusetts Currency,' (plate, p. 38)." The "Good Samaritan Shilling " attracted attention as early as 1767, when Thomas Hollis wrote about it to the Rev. Andrew Eliot, D. D., of Boston, and in his letter said: "Shilling, No. 10, Massachusetts in Portraiture of the good Samaritan. Over it FacSimile No Reverse If the shilling, No. 10 can be procured for T. H. in fair, unrubbed, uncleaned condition, he will be glad of them at any price." To this Dr. Eliot replied: "The portraiture of the good Samaritan no one among us ever heard of. I am persuaded that it was not a current coin; but a medal struck on some particular occasion." It will be noted that the piece Hollis asked for, nearly a century before Wyatt, had "no reverse," and was a facsimile copy of an earlier issue. 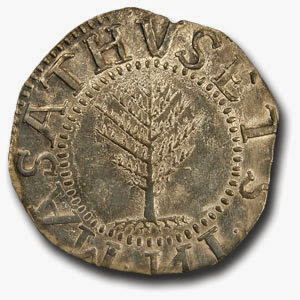 In 1856 counterfeits of the piece appeared, and in a sale by Bangs, Merwin & Co., Sept. 24, 1874, a "Samaritan shilling" was offered with a Pine tree reverse. This example was struck in gold, and was at once recognized as a fraud. The editor of the Journal (then Mr. W. S. Appleton) said at that time, "We have no doubt this is one of Wyatt's fabrications. It is well known that the Good Samaritan piece was not a coin, and all which were ever struck in gold (and no one knows how many beside) came from the same unscrupulous hand." For a further account of the piece see " Crosby's Early Coins." Mr. Appleton, in commenting on the piece in the Parmelee collection said he had not changed his opinion frankly expressed some years ago, "as to its genuine character," and still thought it sold "for a great many times its value." If however the Williamstown specimen should chance to be a genuine "Pine Tree Shilling," and not one of Wyatt's counterfeits, a detailed description of the particular variety, of which we are told there are only two others like it in existence, etc. — one valued at $212, or more, and the other at — nobody knows what — would be interesting to many collectors. We are tempted to inquire on what authority the reporter says that only two others like it are in existence, neither as good as this one. Monday, October 24, 1910 Paper: Boston Herald (Boston, MA) 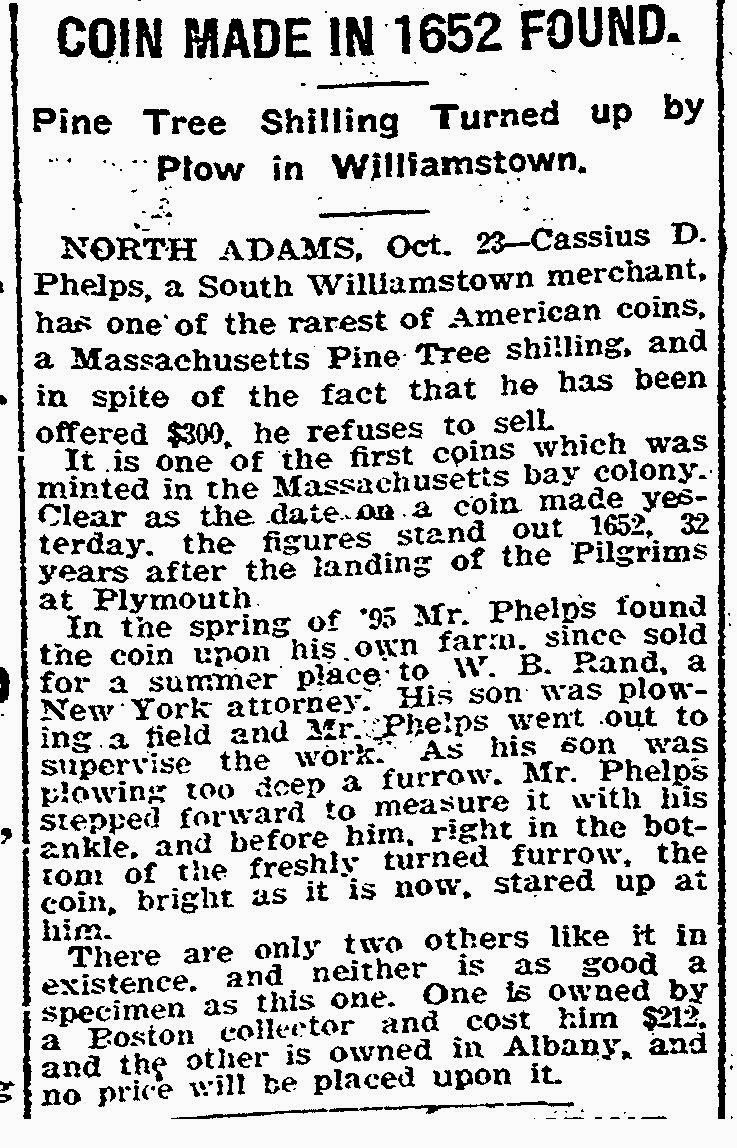 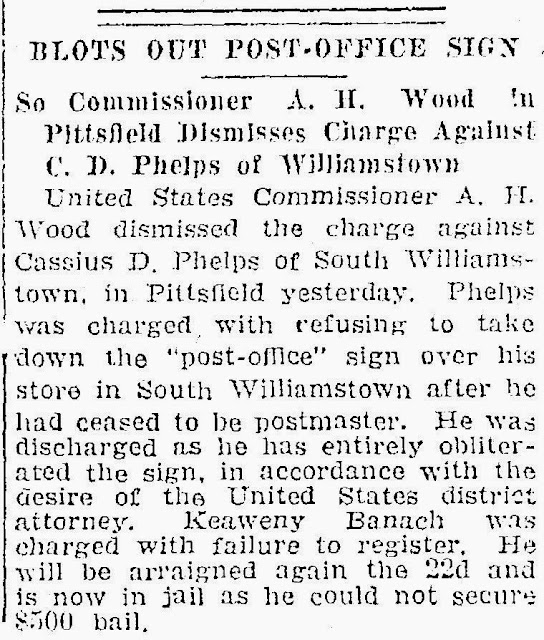 Posted by Melissa Davenport Berry at 6:58 AM