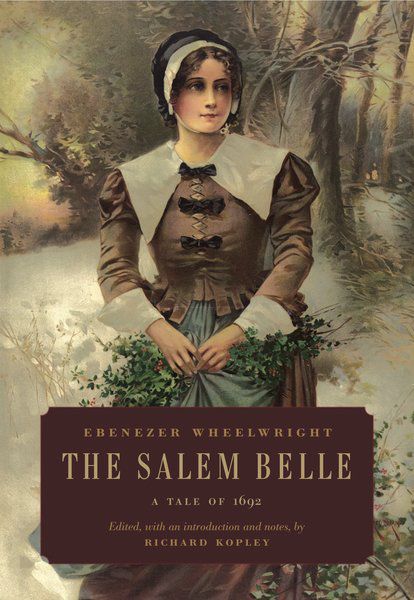 Arthur Miller, author of “The Crucible,” was hardly the first writer to be fascinated by the Salem Witch Trials.
In 1842, a writer from Newburyport named Ebenezer Wheelwright wrote a novel called “The Salem Belle: A Tale of 1692,” which drew on the same subject.
“It’s a story about a fellow who’s rebuffed by a woman he loves, and to get back at her, he claims she’s a witch,” said Richard Kopley, a professor emeritus of English at Penn State DuBois. “It’s 1692, and he’s believed — he’s playing to the superstitions of the populace.”
Kopley wrote an introduction for a new edition of “The Salem Belle: A Tale of 1692” that was published this year by Pennsylvania State University Press.
A scholar of American literature, Kopley had found a short review of the novel in a 19th-century magazine called The Pioneer. He had written about sources for Nathaniel Hawthorne’s “The Scarlet Letter” in the past, and this review seemed to reveal a brand-new one.
“The description of the plot (in the review of “The Salem Belle”) culminates with reference to an anticipated death at the scaffold,” Kopley said. “I thought, that’s how ‘The Scarlet Letter’ ends — with death at the scaffold.”
After finding and reading a copy of “The Salem Belle,” he found two other scenes with powerful verbal and thematic echoes of scenes from “The Scarlet Letter” and felt convinced of the connection between the two books.
Although “The Scarlet Letter” is concerned with adultery and not witchcraft, Kopley felt Wheelwright’s biography made the book important to Hawthorne.
Wheelwright was a descendant of John Wheelwright, who was involved in the antinomian controversy — a theological dispute fostered by John’s companion, Anne Hutchinson — that shook the Puritan church in Colonial times.
“Hawthorne would have known of John because he knew Puritan history,” Kopley said.
That controversy in turn underlays themes of sin and redemption that Hawthorne pursued throughout his fiction.
“He’s secretly allegorizing the history of the antinomian controversy as a way to tell another allegory — the defiance of Adam and Eve in the garden,” Kopley said.
No author’s name was given in “The Salem Belle,” and it took an enormous amount of detective work for Kopley to discover Ebenezer Wheelwright’s identity.
Among his discoveries, after searching several archives, was that Wheelwright had declared bankruptcy and probably published the book anonymously because he didn’t want creditors to claim any profits he made from his writing.
Kopley also visited Wheelwright’s former home on High Street in Newburyport and spoke to his descendants.
“This was a mission of mine, so I could tell the story of the man behind the book, which was a critical source for ‘The Scarlet Letter,’” Kopley said.

From Newburyport News By Will Broaddus December 2016
Recently I wrote a piece Hawthorne's family scandal that fueled "The Scarlet Letter"
Posted by Melissa Davenport Berry at 7:23 AM