Below is the Genealogy of the descendants of Isaac Stearns* of Watertown, Massachusetts. Issac Stearns arrived in Massachusetts Bay Colony on the Arabella, the first of the Winthrop Fleet (June 1630). He settled in Watertown, Massachusetts. Mary Barker was daughter of John Barker and Margaret Walker.
These photos are from the collection of  the family of Ruthie Stearns daughter of Rev. Howard Stearns. Ruthie contacted me after reading my blog post on her 2nd great grandparents Joseph Oliver Stearns and Helen Louise “Nell” Dennett of Amesbury, Massachusetts. Photo of Joseph Oliver and Helen Louise below Please keep Checking Back More Photos will be added on the GOULD, SWETT, WELCH, JONES, and EASTMAN lines and the families they married into. Please contact me for permission to republish photos or material. Thank You!

A NOTE FROM RUTHIE STEARNS:  About a year and a half ago, I began  going through the photographs, notes, papers, diaries, and letters belonging to many of the lines of our family, which were saved by many of my recent ancestors, and organized by my parents, Howard and Barbara Stearns.    My goal at that time was to  catalog the collection in the family and scan the photos.  I happened to be googling family names, and stumbled on Melissa’s blog post on Joseph and Nell, only days after she wrote it.   What a surprise, and what a wonderful time we’ve had emailing and calling and visiting since then.  I’ve learned so much about local Amesbury/Salisbury history, and have shared many of the photos with Melissa since that time.

Likely the most illuminating and valuable part of the collection, are the diaries of Helen (Nell) and Joseph.   Helen’s diaries covered 1858 to around 1870, (she died rather suddenly just before her 31st birthday in 1874) and Joseph’s from 1857 to 1870, and then picking up again in late 1880 and ending with his death in 1917.  I am attempting to transcribe them all, a task begun decades early by my late sister Anne.   She had done many of the diaries of Helen, along with her “Love Letters” which she wrote to Joseph during his 90 day service during the Civil War.  I wanted to continue the effort with Joseph’s diaries, and have transcribed about 15 years of his life thus far.  It’s been a fascinating task, and I enjoy sharing bits and pieces of the lives of these two ancestors of mine, whose life together was cut short.   Photo above of Ruthie Stearns and her Great Aunt Helen Rachel Stearns. Photo below The Diary of Joseph Oliver Stearns.

Many of the families that the Stearns line married into trace back to original settlers of New England. The POOR/POORE, STICKNEY, PEABODY, GOULD, CHASE, KILLAM, POTTER, EASTMAN, DENNETT, FROST, PERKINS, HALL, MORRILL, PILSBURY, OSGOOD, BROWN, BURBANK, PARKER, & Others. See Genealogy and memoirs of Isaac Stearns and his descendants

Adding some of the next generations of family lines


Special Thanks to Archivist and Author of Legendary Local of Amesbury, Margie Shepard Walker at the Amesbury Public Library, Amesbury Historian Steve Klomps, the Macy-Colby House in Amesbury, Newburyport Daily News, Cheryl Follansbee of Newbury, MA and Newburyport Genealogy Group, Archivist Richard Trask at the Peabody Institute Public Library, The Bartlett Farm and Bartlett Family of Salisbury, Gordon Harris of the Ipswich Historic Commission, and Paul Turner of the Salisbury Historical Society and Professor Emerson Baker author of A Storm of Witchcraft
The Charles Oliver Stearns Family Bible copy of a Marriage, Death, and Birth page. 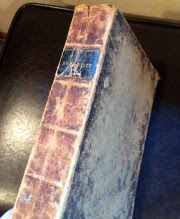 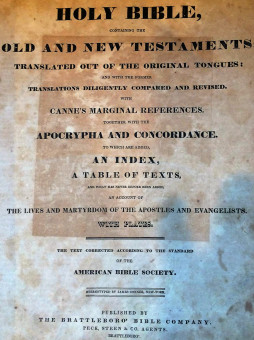 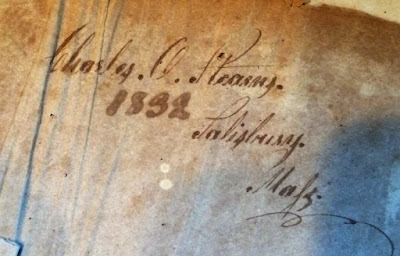 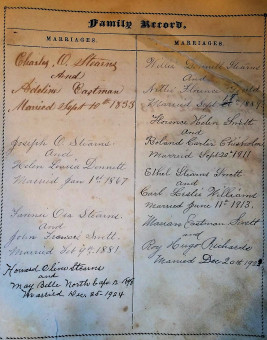 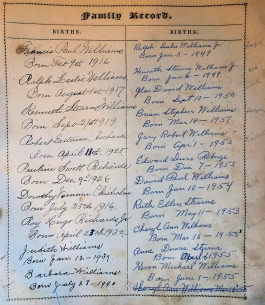 The Stearns Home in Amesbury, Massachusetts before it was moved

The Shell Picture: A Collection of Stearns Family Photos*
*The “Shell” picture.  Charles, Adeline, Sarah, Susan, Joseph, Hattie, Gustie, Nell and Fannie.   Ruthie Stearns notes that her parents always thought the shells came from Salisbury beach, but the diaries of Helen Louise Dennett Stearns provided a possible clue.   It’s  1862, and Helen (Nell) writes often of the Stearns girls around her age  (Hattie and Gustie and Susan mostly) who seem to be boarding at the Dennett home when they are either in school or working at a hat factory.  Ruthie suspects this is how Helen Dennett and Joseph ended up meeting.   Helen Dennett’s diary notes that Mr Stearns returned home from California, and that a few days later, she went to visit him with some of the Stearns girls, and he showed her this collection of shells he had brought back from California, after working there over two years.   Here’s what Helen  wrote, April 16th;  “…in the evening Gustie, Hattie and I went down to Rocky Hill; Gustie introduced to Miss Fowler; did not stop there long; it was very dark when we got down to Mr. Stearns’, spent the evening looking at the shells; Mr. Stearns brought home a great many from California;  they are the most beautiful shells that ever I saw, we staid till nearly 10 o clock waiting for the moon to rise;  came home on the railroad,had a very pleasant walk.”

Helen Stearns at her loom in Haverhill, M

Group Photo at Shamut Ave House Stearns*
Nettie is on R, with Helen in her lap, and Howard and Mildred in front of her, standing.

Salisbury Beach Outing  Helen Rachel Stearns and her mother Nettie Florence Gould Stearns in photo.  Nettie is near the back under the window with the large wrapped hat, Helen is below her and to our left, under the infant.

Photo  Helen Rachel Stearns in back row, second from left.

Group Photo Haverhill National Bank.  William Dennett Stearns second from end on the right in the back row.

Rye Beach, in New Hampshire.  Standing is Nettie Florence Gould Stearns.  Her daughter Helen Rachel Stearns on the far right.  Helen’s father WIlliam Dennett Stearns in the front.  Sitting with a coffee cup, is likely Melvin Gould, Nettie’s brother.  I don’t know who the couple on the far left is, but the man is not a Gould, making me suspect the woman could be Annie Kinsman Gould Jones, Nettie’s sister, and the man Annie’s husband Forrest Jones of Plaistow, NH.  1920’s.

A clip from “The Parker Family of Andover” By Charlotte Helen Abbott published by The Andover Historical Society on Phebe/Phoebe Parker who married John Varnum.

A Leaf from the Past Tuesday, July 5, 1859  Lowell Daily Citizen and News (Lowell, Massachusetts)

Posted by Melissa Davenport Berry at 4:31 AM