"The Countess" is founded upon the following story: In the stormy month of March, in the year 1792, a brig anchored at Newburyport, Massachusetts from which landed seventeen French exiles, who had fled from Guadaloupe on account of a rebellion on that island. They were part of the French aristocracy escaping a blood-thirsty mob who sought vengeance on all the noble families of France. Of these emigrants nine remained in Newburyport and their graves are still seen in an ancient burial place in that city.

According to the John Greenleaf Whittier papers: Count Francois de Vipart with his cousin Joseph Rochemont de Poyen came to the United States with these French families and took up their residence at Rocks Village on the Merrimac, where they both married. The wife of Count Vipart was Mary Ingalls, "who as my father remembered her was a very lovely young girl." Her wedding dress, as described by a lady still living, was "pink satin with an overdress of white lace, and white satin slippers." She died in less than a year after her marriage. Her husband returned to his native country. He lies buried in the family tomb of the Viparts at Bordeaux.

Historic Summer Haunts From Newport to Portland written by Frederic Lauriston Bullard
In a churchyard quite near the river is the grave of " the Countess " of Whittier's poem, the village bride of Count Francois de Vipart, who died within a year of her marriage. On the south side of the Merrimac was the home of Sarah Greenleaf, and farther down are the well-remembered laurels of Newbury. On the north bank again and in Rocks Village is the home in which " the Countess " lived. 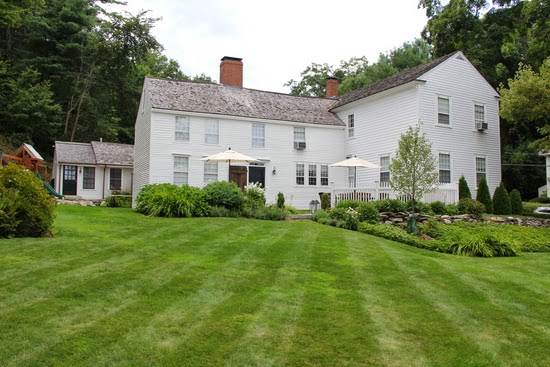 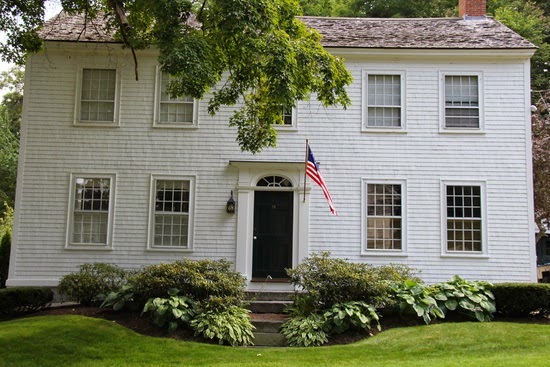 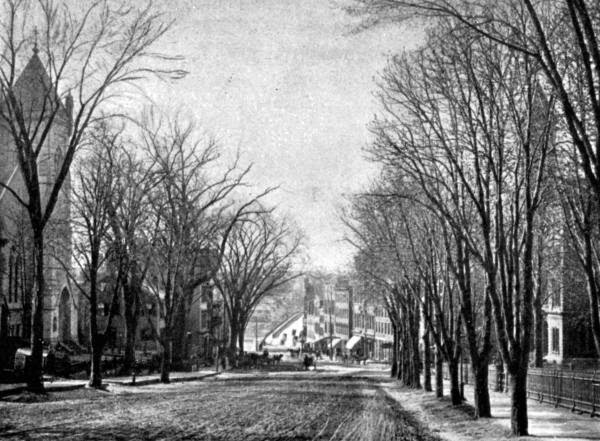 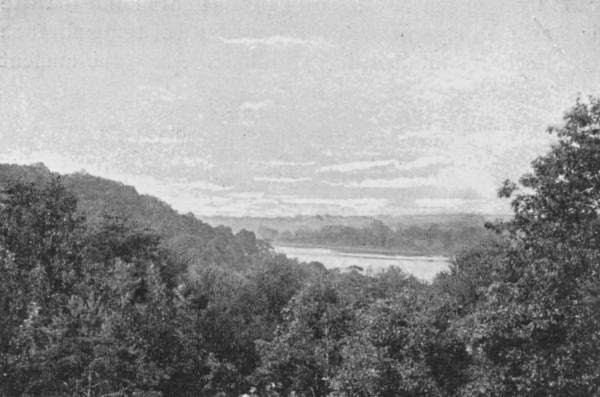 RIVER VALLEY, NEAR GRAVE OF COUNTESS
"For, from us, ere the day was done The wooded hills shut out the sun. But on the river's further side We saw the hill-tops glorified." The River Path 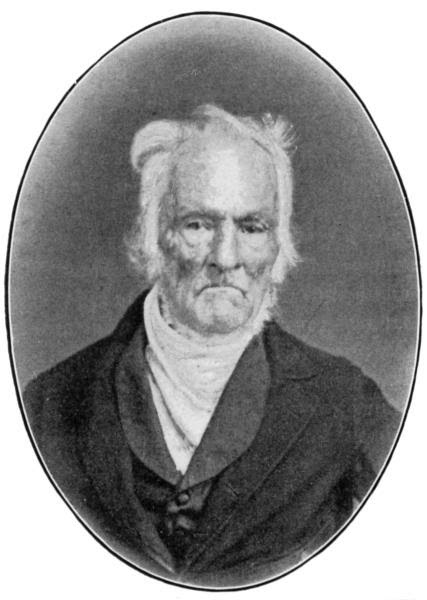 DR. ELIAS WELD, AT THE AGE OF NINETY

I inscribed this poem to Dr. Elias Weld of Haverhill, Massachusetts, to whose kindness I was much indebted in my boyhood. He was the one cultivated man in the neighborhood. His small but well-chosen library was placed at my disposal. He is the "wise old doctor" of Snow-Bound. 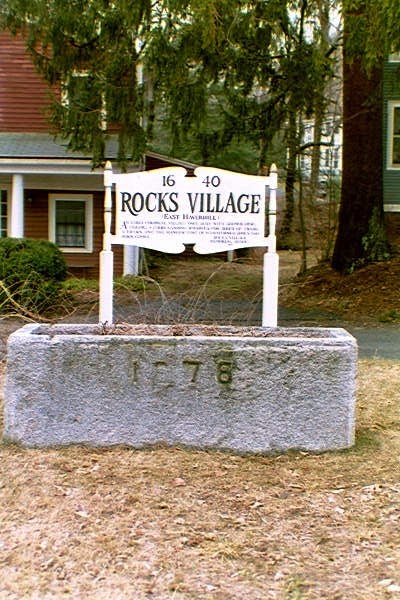 Years ago, as one crossed the old covered bridge that stretches across the river Merrimac, and emerged from its semi-darkness, a busy little village came into view. This village was known for years as "The Rocks". An inquisitive person would soon ask, why was it called "Rocks" People would ride over the modern bridge at low tide, will see the rocky bed of the river, with the water rushing over it. A man owning land near, by the name of Holt, gave the name of "Holt's Rocks", to that section of the river; before any bridge was placed at this spot, there was a ferry boat that went from West Newbury to Haverhill, and it was known as " Holt's Rocks Ferry." Also see Swett's Ferry as noted in Ben H Swett Records 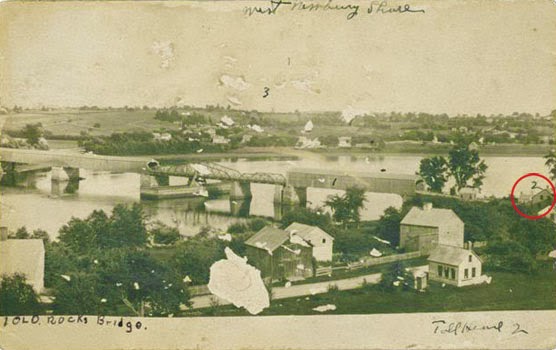 This worn image of the Merrimack Bridge and the Rocks Village Toll House dates from between 1891 and 1912. It shows the 1828 covered bridge and toll house (marked #2) along the approach to the right of the bridge. Photo from Henry Ford Museum.

The Rocks Village Toll House
Jim McCabe, Curator of Historic Buildings Henry Ford Museum
The 1828 Rocks Village Toll House is a simple, functional building made to house the toll keeper, and provide room for his other work as a shoemaker.  The Rocks Village Toll House, which now sits adjacent to the Ackley Covered Bridge in Greenfield Village, formerly served a much larger covered bridge and drawbridge which spanned the Merrimack River, connecting the towns of Haverhill and West Newbury, Massachusetts.  The bridge and toll house were built in 1828 to replace an earlier bridge that had been destroyed by a flood.  Their construction was not the responsibility of the towns where they were located, nor the state or federal government, but of the Proprietors of the Merrimack Bridge, a group of Haverhill and West Newbury investors who had built the first Merrimack Bridge in 1795.  The building housed a toll keeper, who was responsible for collecting the tolls and for opening the drawbridge when necessary.  In his considerable spare time, the toll keeper also worked as a cobbler, making shoes.  Tolls were collected until 1868, and the toll house remained in use for the drawbridge until 1912.
When the first Merrimack Bridge was built at Rocks Village in 1795, there was a need for good routes from the farmlands of northern Massachusetts and New Hampshire to the growing urban markets of Boston.  Neither the new federal or state governments had the resources to build and maintain many roads.  As a result, privately-owned turnpike and bridge companies, like the Proprietors of the Merrimack Bridge, were encouraged to fill that need with toll roads and bridges, and they proliferated around the new nation.  The era of turnpikes and toll bridges was beginning to draw to a close when the second Merrimack Bridge was built in 1828.  By mid-century, canals, and then railroads, had replaced roads as the primary means of traveling across distances, so roads and bridges were generally used more for local travel.  This change can be seen in the decline in weekly receipts at the Rocks Village Toll House, from a high of $58 in 1857, to $29 in 1868, when the Merrimack Bridge became a free bridge.  At that time, Essex County assumed authority over the bridge, and the towns it served, Haverhill, West Newbury, and Amesbury, shared the costs of its upkeep.  With only local support, upkeep was sporadic at best, and by 1912, most of the bridge had to be replaced.  The Rocks Village Toll House had witnessed the decline of the American road during the mid-19th century.  It would not be until the advent of the bicycle in the late 19th century, followed by the automobile in the early 20th century, that this decline would be reversed.

More info The History of Haverhill, Massachusetts By Benjamin L. Mirick, John Greenleaf Whittier
At one time there was a shipyard also near and quite a little shipbuilding was done. The first bridge built at this turn of the river, was washed away in the great freshet of 1818; for nearly one hundred years, the second bridge, known to the present generation as the old covered bridge did duty as a highway, joining the two villages; there were but few openings to let in the light, and for this reason at all times of day there was a peculiar dimness, and at night, with a few whale oil lanterns hung here and there, the dimness could almost be felt. I remember the village as it looked sixty years ago, and the general appearance has not changed much. In a mental picture I see the Old Toll House, The Tavern, the house of Dr. Kenniston, the residence of Mr. Samuel Elliott, and many of the other homes, and the old Brick Store.

On each end of the old bridge there was a sign, stating that driving a horse faster than a walk was forbidden, and a fine for not obeying. The old Tavern fifty years ago, was the centre of the village life. At that point railroads only connected the most important towns and cities, so that the old Stage coach was the usual means of travel for people who did not own a family horse; also long journeys were taken by this method, making it quite important to have sections in the journey where entertainment for the traveler and the horses could be had.

The old Tavern signs always read, "Entertainment for man and beast". This Tavern at Rocks Village was one of the important stopping places, for people traveling into New Hampshire, and to the large town of Amesbury.

There were shoe factories in the village also, Messrs. Geo. & Samuel Elliott, Mr. Maynard, and Mr. Rufus Chase, and perhaps others I do not remember. Mr. Samuel Elliott built a modern house, that gave quite a distinction to the street.

In front of the house was a very handsome iron fence that was a novelty at the time; the exterior of the house was attractive, painted white, with green blinds; the front door was a feature also, one long panel, with a pointed gothic top, and iron ornamental work inserted. Rocks Village was a bustling place, and its life extended to remote parts of the section.  But the life story of the hamlet is the most

interesting part.  The shoe industry, that makes Haverhill known in a large part of the world, had its beginning here, but soon was transferred to the town centre.  Mr. Rufus Chase, Mr. Maynard and the two Elliott brothers, George and Samuel transferred their shoe business, and moved into town for their residence also, where the
increase in trade brought wealth to them, as it had done to many others.  They were among the pioneers in this great industry.  Romance also had its share in the town history. The fine old colonial home, that for many years was the home of Dr. Kenniston, was also the birthplace of the "Countess", the subject of one of Whittier's poems. Mary Ingalls, daughter of Henry and Abigail Ingalls was born Jan.1786; her paternal grandfather was
the Rev. Payne Wingate.  The French Revolution in Guadeloupe drove many into exile.  Seventeen of these
exiles landed in Newburyport in 1792.  Count Francis de Vipart and Joseph Rochemont de Tojan, came to Rocks Village, and the Count fell in love with Mary Ingalls, and married her Mar. 21, 1805.  The Count
was said to be tall and very fine looking.  Whittier in his poem calls Mary Ingalls, "the pick of the village".  Her wedding dress was pink satin with a white lace overdress, and she wore white satin slippers.
The Countess lived but a few years; her burial place in Greenwood Cemetery, has the old time slate headstone, with the following inscription:
May Wife of Francis Vipart of Guardaloupe Died Jan.- 5 - 1807 Aged 21

Posted by Melissa Davenport Berry at 6:11 AM