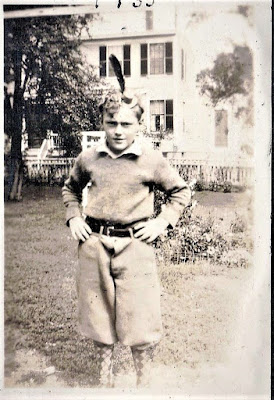 Over the past few years I have worked with James Zafris JR (b. 1928) son of James Zafris SR and Marguerite Greeley Russell of Newburyport. The photos he shared are a great contribution to the Port’s rich history,  Photo to left is James Zafris JR at his home on Tremont Street in Newburyport. He had three siblings: Marguerite Zafris Walton, Georgiana Zafris McDonnell, and Eugenia Zafris Arsenault. James and I discovered many ancestral connections which include the Wolfe Tavern founder, Mayor Moses Davenport, and Salem 1692 witch trials. We have traced the family line back to John Perkins of Ipswich, Newbury, MA settler families Knight, Chase, Noyes, and Chase, and Captain William Berry of Rye, New Hampshire. 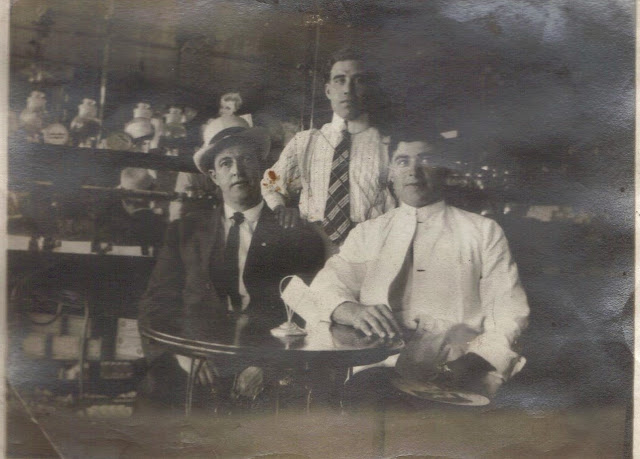 They stocked with only the best quality goodies such as Schrafft's Candy Factory in Cambridge and Jersey Ice Cream Co in Lawrence. Aromatic coffee blends and the best cigars and could be had as well. They catered and made home deliveries. In 1916 James did renovations on 88 State Street as per “patron demand” and added a new room to serve luncheon. 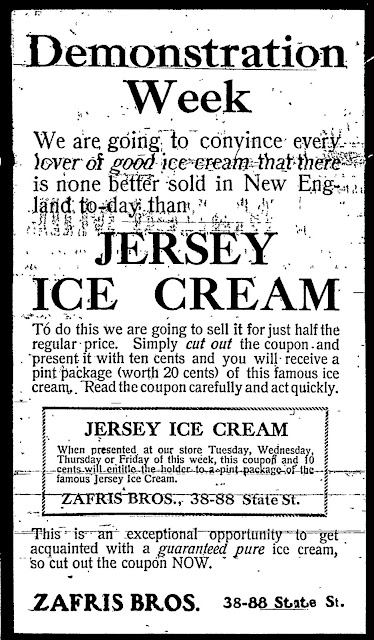 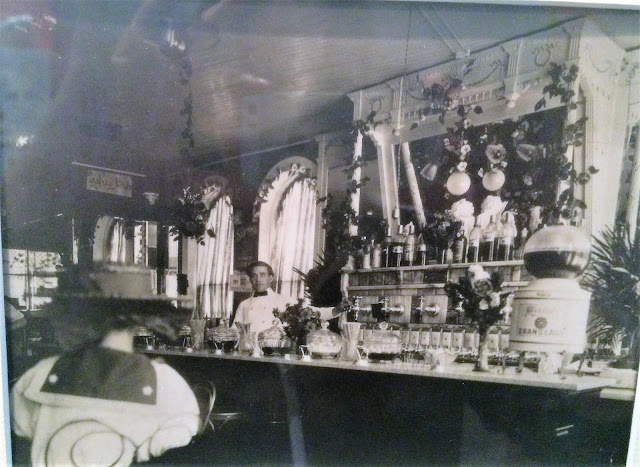 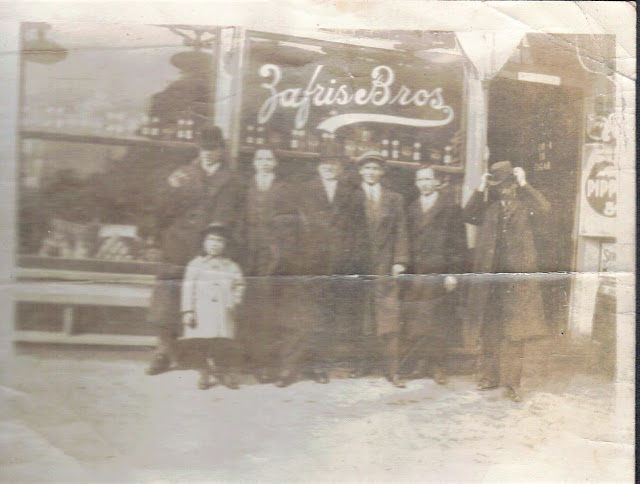 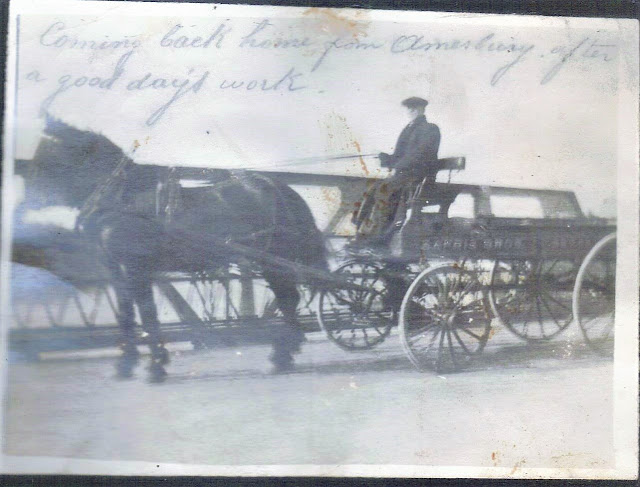 As the mint multiplied so did the family enterprises which included a vending business and the Riverton Trolley Park in Portland Maine (partnered with Dennis J Kelleher).

The sale of 88 Street store to a Miss Annie J Ryan was noted in “Confectioners' and Bakers' Gazette, Volume 41.” James Zafris is listed in the 1922 “The New England Business Directory and Gazetteer” running a wholesale Confectionery goods company on 13 Market Street in the same town. James JR remembered he was a wholesale distributor for Drake’s Cake Company after he closed his shop.

I did find a few dramas. On December 30, 1912 James was held up by gunpoint, but he outsmarted the thief by pulling out his flashlight which the thief mistook as gun. 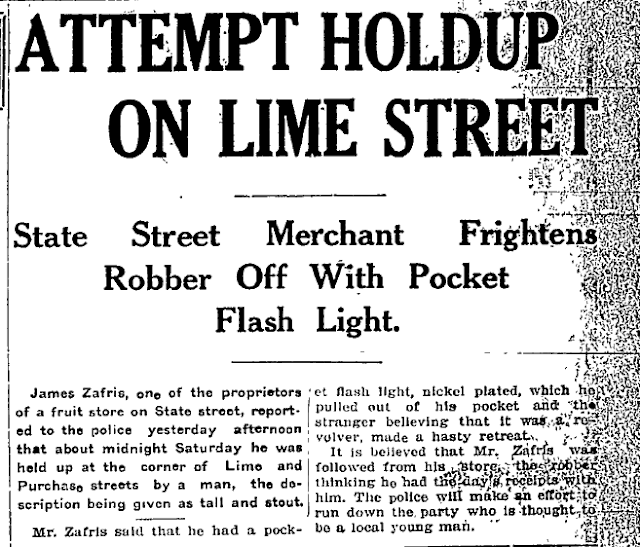 A news clip “A Lively Time,” recalled the events one afternoon when a man named Crocker was in town to repair chimneys. He left his horse and buggy near the new Kimball block on Main Street alone. The horse got startled and made his way down Main to Timothy Sullivan’s store and crashed into the auto truck owned by Zafris Brothers. The buggy and trucked were wrecked, but the horse just trotted on making his way to Market Square.

According to “The Standard” in 1922 a fire consumed all the candy stock at Zafris Brothers on 13 Market Street and a loss of 10,300 was reported. 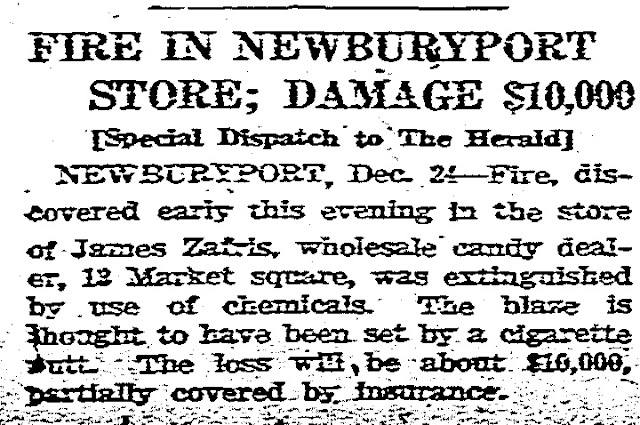 James JR remembers his mother was proud to be a “Joppy-ite,” a term used by the locals who lived in the area named "Joppa Flats."  Her father, Captain Albert Russell (1862-1921) served on Newburyport Hose 8 fire station and was chief for part of his career. Her mother, Margaret Moynihan a talented dressmaker born in Ireland.


“My parents were real opposites,” James JR said, “my mother was extroverted, and my father was reserved.”  What brought these two together? Perhaps the magic started at the local dance hall. James JR showed me his mother’s dance card from “Sixth Annual Dance” given by “The Telephone Girls Club” which his mother was a member.  She was as a telephone operator at the time, and “she knew everyone’s name.”


“She was a gifted pianist and loved music,” noted James JR.  She taught private lessons and volunteered her time to teach children. I found several newspaper clips of community concerts, pageants and festivals which Marguerite performed in. 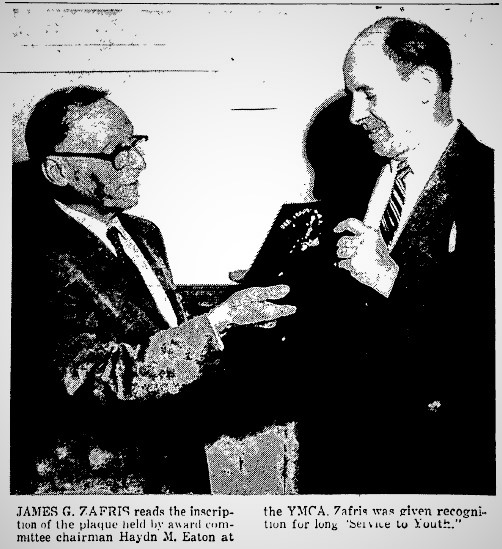 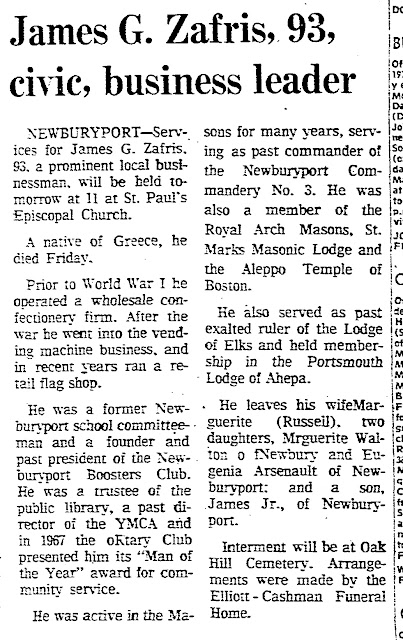 James JR noted that his father was a very disciplined fellow. He was a 32nd degree mason head of the Newburyport Commandery, No 3, Knights Templars, and a Shriner.


In addition, he served on the school committee, trustee of the library, and as director of the Y.M.C.A. Marguerite’s vivacious personality must have rubbed off on James. I found news clips revealing this match liked to party and cut a rug. When the South End Civic Association was raising money for Christmas James furnished the lasts tunes at the rock hop! Opposites really do attract!