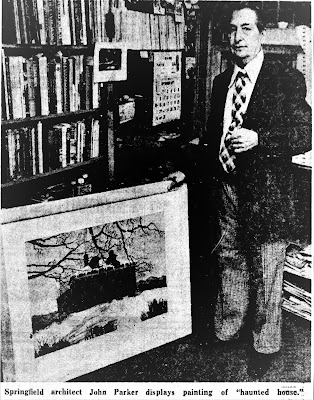 John Cuthbert Parker (1904-1977) a famous paranormal investigator bewitched a whole generation of New Englanders. His tales of ghost hunting covered over thirty spook dens. His lectures were booked solid and included an illustrated slide show, his watercolor sketches of the homes, and pamphlets on ghost hunting with a full survey road map. John was born in Newburyport, Massachusetts to
George Francis Parker and Ethel Genevieve Ball. He grew up in the Josiah Little house on High Street. On September 16, 1933 John married Wilhelmina Kruse daughter of William Frederick Kruse and Sophia Wilhelmina Caroline Klepper. Their daughter Wilma Parker De Pavloff has provided me with lots of research material on her father.

Parker’s favorite haunt was the Porter-Phelps-Huntington Mansion, aka “Forty Acres” in Hadley, Massachusetts. Shortly before Dr James Lincoln Huntington (1880-1968) made his ancestral home into a museum, he invited Parker to investigate ghosts on the property.

Parker chose Halloween night (October 31, 1957) to make his stakeout. His findings appeared in Yankee Magazine 1968 and you can read about him in the Porter-Phelps-Huntington Family Papers, 1698-1968.

In a Sunday Boston Globe article published in October 1975 Parker recalled the cold, windy night when the Huntington’s helped him carry in his camera and other paranormal devises to prepare for the vigil. He sealed the attic door with tape and sprinkled a powder trail from the bedroom reported to have the most activity to the second-floor hall. 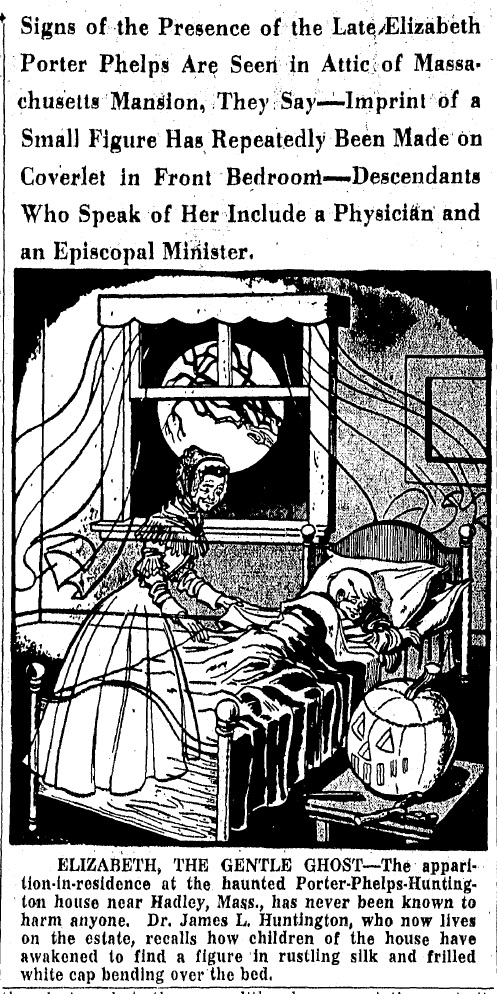 At 10:30 Parker heard footsteps coming from that bedroom and saw “a disc of amber light which grew large and dissolved into amber stripes.” He concluded is was the specter of Elizabeth Pitkin Porter (1719-1798) wife of Captain Moses Porter (1722-1755) killed in the French and Indian War. 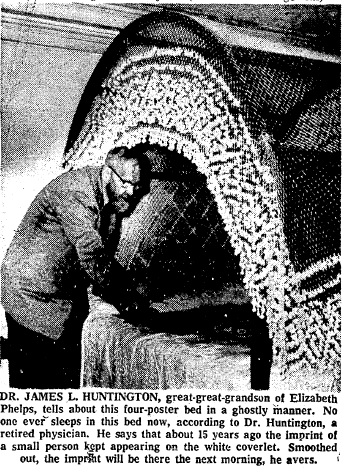 It certainly matched the “lady like” presence described by Dr Huntington who was convinced that it was his great-great-grandmother. “She was never known to harm a soul or utter a word,” and many generations spoke of the “ectoplasmic” Elizabeth hovering over their beds in “full rustling silk skirts and a white frilly cap” to tuck them in.

When the grandfather clock struck three, Parker heard the latch to the sealed attic door lift open three times. Then, a door in the wall under the eaves began to bang violently for almost a duration of twenty minutes. Parker claimed, “it would have broken your fingers if you put your hand near it.” The next morning, he reported the tape on the attic door was broken. Parker wondered if the banging noise could be Elizabeth acting on her grief from losing Moses. His body was never recovered and only his sword was returned to Forty Acres.
Dr Huntington was so impressed with Parker he appointed him director of the Bishop Huntington Foundation.

When Dr Huntington served as curator Elizabeth did not have any children to tend to, but she would swish through rooms, take a turn at the spinning wheel or hang out in the attic. During guided tours he reported “Elizabeth has never seen fit to preform for the public.” However, she always left her imprint on the bed for all to see.
Dr Hunting does not limit the spectral sightings to Elizabeth alone. Her daughter, Elizabeth Porter Phelps (1747-1817) wife of Revolutionary war soldier Charles Phelps (1743-1814) was on the suspect list. Dr Huntington published her diary which covered a span of 54 years.

And if this does not convince you! Dr Huntington’s brother, Rev Paul Phelps, a retired Episcopal minister came to visit from Richmond, VA in 1957. He saw a shadow figure in the north room where no sun shines through the north window. The minister felt a chilled wind encircle him. Dr Huntington summed up that “you have to take the word of a minister.”

Posted by Melissa Davenport Berry at 8:50 AM