Garrison's battle was fought from Newburyport

By Arnold Lessard Newburyport News May 31, 2010 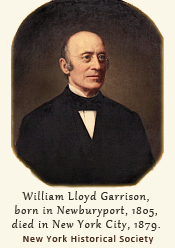 William Lloyd Garrison was born on School Street in Newburyport on Dec. 10, 1805. He would go on to acquire international renown as one of the great fighters for the abolition of slavery and for women's rights.

His father abandoned his home, wife and three children and was never to return to Newburyport. William never knew his father. The deserted family was penniless.

His mother worked as a nurse and sold baked goods, while William would often go out with a pail in hand to sort through the garbage of the fancy houses on State and High streets.

Garrison was the typical boy of his age, what with rolling hoops, playing marbles, swimming in the river and sneaking on board ships to get a taste of the molasses they contained. He almost died one winter when he fell through the ice and struggled to get back to shore as the ice continued to break under his feet. He also led forays involving "down alongers" against similar gangs of "upalong" boys.

His mother moved the family to Baltimore, but William wanted to return to Newburyport, where in 1818 he signed a seven-year apprenticeship agreement with The Herald as a typesetter. He began to write articles and as he said later in life, he wrote without any idea of the rules of grammar, having had almost no formal schooling.

Garrison was a devout Baptist and seriously considered becoming a Baptist missionary. His fellow church members would recall him as a young man of "... uncommon gravity, neatly dressed and popular with the ladies."

Garrison was 20 when he completed his apprenticeship, which had served him well in that it gave him an education. He left on foot for Boston, where he found employment with the Massachusetts Weekly Journal and later with the National Philanthropist, where he was named editor in 1828.
He later recalled returning to his hometown to welcome the visit of Lafayette to Newburyport in 1824. He reported on the triumphal arch of flowers on State Street, a banquet at the Wolfe Tavern, a reception at the Tracy mansion and the tears in Lafayette's eyes at his warm reception.

Garrison's often very intemperate language and strong positions were drawing criticism. In the words of the Boston Courier, men like Garrison "should be seen and not heard." Another called him "M'Lord Garrison," while still another gave him the name "Mr. Garrulous."

By this time Garrison was a confirmed and dedicated anti-slavery advocate, which brought him to the attention of Benjamin Lundy, who offered him the editorship of the Baltimore-based The Genius of Universal Emancipation.

He immediately wrote a scathing article published in both Baltimore and Newburyport in which he called Todd and Brown highway robbers and murders who should be sentenced to solitary confinement for life or to the lowest depths of perdition. The result: libel suits and the serving of seven weeks in the Baltimore jail before friends could bail him out.

Garrison was active on the anti-slavery lecture circuits. Returning to Newburyport to deliver a series of lectures, he was literally turned down by the Presbyterians and the Congregationalists. He would later characterize the clergy as "a brotherhood of thieves." It would be 30 years after this time before Garrison would speak publicly in Newburyport.

Even his closest supporters were continually warning Garrison that he should tone down his rhetoric. His response is engraved on the base of the monument we see in Brown Square Park. The first issue of The Liberator contained these words:

"I will be harsh as truth, and as uncompromising as justice. On this subject I do not wish to think or speak with moderation. I will not equivocate. I will not retract a single inch. And I will be heard."
Garrison by now had gained an international reputation and become the acknowledged leader of the American Anti-slavery Society. He made several trips to England for meetings with the leading British anti-slavery leaders.

The Emancipation Proclamation of 1862 marked the end of Garrison's efforts. By that time, he was often ill and indisposed. He lived until 1879, passing on at the age of 73. 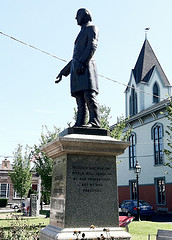 Today, we will salute his memory as we look up at that familiar figure standing tall on his monument. The statue was created by a Newburyport artist, David French, who called this work "the greatest of my life." The unveiling ceremonies took place on July 4, 1893, complete with parades, fireworks, speeches and marching bands.
Posted by Melissa Davenport Berry at 11:51 AM No comments: