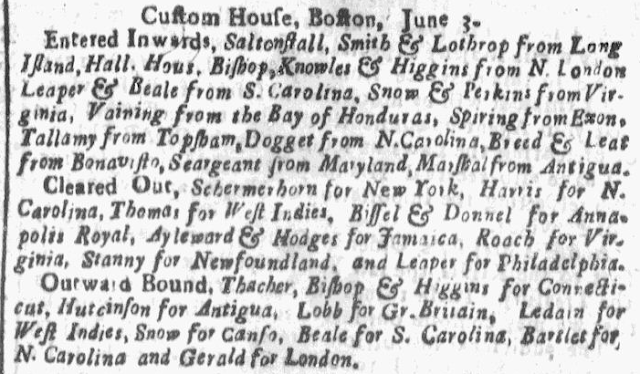 
The disappearance of the Colonial Customs records of Massachusetts has long been lamented by maritime and economic historians. Many people have tried to locate whatever records might have survived from the various Customs districts, primarily those of Boston and Salem. What little has been published on the topic is clouded in myth and conjecture, some of which sounds logical, yet searches have repeatedly ended in frustration. My own interest in the Customs service stems from years of research towards a biography of Boston Customs officer Benjamin Hallowell. A challenge from a maritime history friend brought me to the many questions surrounding the story of the missing Customs records. 1 Although definitive answers remain elusive, retracing and weaving together what is known about the early events and the subsequent searches, while presenting new evidence, reveals the probable fate of these records.
Although scattered Naval Office Returns, Admiralty Court records, newspapers, and shipping insurance papers survive in America and London, they are only fragments of the larger story of maritime Massachusetts. Boston and Salem were the busiest ports in the Province during the years just prior to the Revolution, and Boston had been the center of British Customs for New England since the late seventeenth century. After the arrival of the five-man American Board of Customs Commissioners in 1767, the town also became the supervisory center for all British North American Customs operations. It had been hoped that having a Board in the colonies would alleviate problems for both merchants and Customs officers, who previously had to channel their complaints through London. The Port Books kept by Custom House officers recorded shipping entrances and clearances, destination points, vessel name, rig type and tonnage, master, owners, and cargoes. Port records were also kept by Naval Officers, direct appointees of Colonial governments, including those residing at several ports in Massachusetts. The Customs information was tracked in order to charge the appropriate duties and bonds under the British Navigation Laws, and to collect the fees that supplemented the officers’ salaries. The Commissioners and their staff oversaw all North American Customs officers, and collated and summarized their records, including the collected revenues. As such, the early Custom House Port Books, as well as the Commissioners’ Records, would be an unparalleled resource… if they still existed and could be found.
The story of the disappearance of the Massachusetts Customs Records is traditionally associated with the Evacuation of Boston in March 1776, when the British Army and Navy suddenly withdrew from the harbor. Lord Germain’s order to evacuate had arrived in December 1775, too late to implement, so despite food and fuel shortages the British troops wintered in place. General William Howe had also delayed leaving Boston due to insufficient transports, so he began detaining incoming cargo vessels, knowing he would need to remove the besieged Loyalists along with his troops. Although the evacuation was being planned in February 1776, once the rebellious Americans took over Dorchester Heights on March 4, and bad weather intervened, negotiations followed to allow the British departure.2 During the chaos of the embarkation, which began in earnest on March 10, military supplies and many already packed personal belongings had to be left behind to afford space for 12,000 British troops and over 1100 fleeing civilians, including many Customs employees and their families.3 Transports had to be quickly loaded with passengers and moved away from the wharves, to gather in the lower harbor among the British Navy escort ships. The first clue in the story comes from an original 1776 Loyalist witness, writing thirty-five years after the fact.4 Speculation on the whereabouts of the Customs records depended to some extent on the presumed veracity of this correspondence.
In 1811, George W. Murray of New York contacted Edward Winslow in New Brunswick, seeking information about two volumes missing from the Suffolk County Register of Deeds. Rumor alleged that two books marked “Suffolk”, found by the family of Samuel Fitch,5 had supposedly been given to someone to return to Boston. One assumes Murray had a direct real estate interest in locating these volumes. In his response, Winslow stated that in 1776 he was Register of Probate for Suffolk County, as well as Boston’s Acting Collector of Customs.6 During the Evacuation British troops were looting supplies under command, but were also damaging and stealing property as they departed, despite a death penalty warning from General Howe. Witnessing the mayhem, Winslow stated that he feared for the safety of the Government records. The previous night the Custom House had been occupied as a military guard room, so he considered the Customs records to be especially vulnerable. The Boston Custom House at this time stood several doors down from the east end of the Town (Old State) House on King (State) Street, which ran in a direct line to Long Wharf, Boston’s principle deep-water dock. Having a party of men at his command7, Winslow stated that he “found means to pack up and place on board a transport, the Probate Records, the Registry of Deeds, and the Custom House books.”
Posted by Melissa Davenport Berry at 9:39 AM No comments: