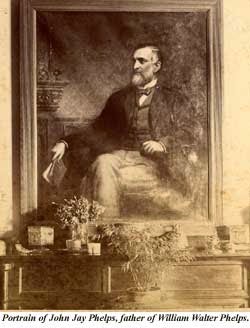 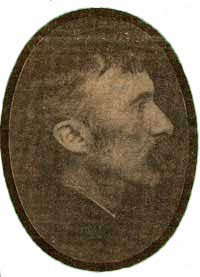 William Walter Phelps: Congressman, Ambassador, Judge By Robert D. Griffin, Township Historian William Walter Phelps, congressman, and judge - no single person influenced the development of Teaneck as much as W. W. Phelps.  In 1865, he purchased the Garrit Brinkerhoff Homestead, a Jersey Dutch Farmhouse that stood at the intersection of Teaneck Road and Cedar Lane.  From then on, he added to his holdings until they encompassed more than 2,000 acres from the Hackensack River to the Hudson River, and virtually all of central Teaneck.  As a result, Teaneck's growth was concentrated along the perimeter of Phelps' estate.  It wasn't until Ellen Marie (Sheffield) Phelps, Judge Phelps' widow, died that the vast Teaneck property was opened to development. 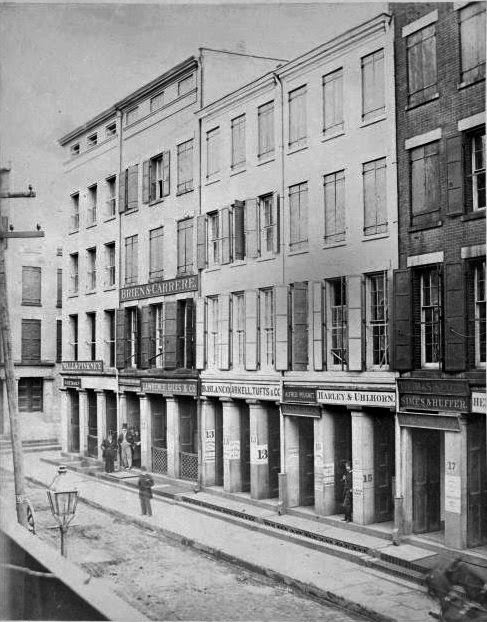 Nos. 13 and 15 (street numbers on the columns) as they appeared in 1866, four decades before Amos Eno would make his "extensive alterations" -- NYPL Collection. On April 3, 1903 Amos F. Eno purchased the four-story brick and stone building at No. 13 South William Street which extended through the block to Stone Street.  Eno was a major player in New York City real estate – it was his land at 23rd Street and Broadway that would become the site of the Flatiron Building before long – and an amateur Manhattan historian.  Eno intended to establish his offices on the ground floor of No. 13 “after extensive alterations have been made.” From Daytonian in Manhattan
William Walter Phelps was already a wealthy man when he arrived in Teaneck.  His father John Jay Phelps was a founder and president of the Delaware & Lackawanna Railroad and, among many other ventures, he also owned a huge department store called Eno-Phelps, in Manhattan.  Young Phelps was an attorney and after moving to Teaneck he became interested in politics.  Elected to Congress three times, he was later appointed ambassador to Germany.  In 1888 he was presented as a vice presidential candidate at the Republican Convention, and late in his life he was appointed special judge of the Court of Errors and Appeals of the State of New Jersey.
But his Teaneck home remained his favorite occupation, and he devoted much money planting trees and paving roads. 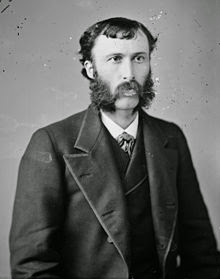 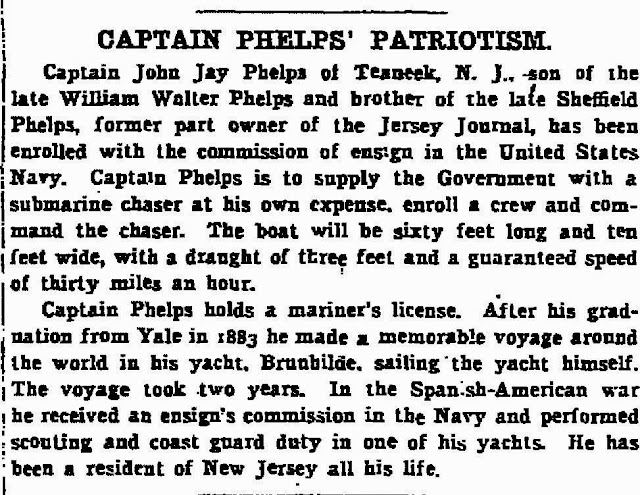 JOHN JAY PHELPS, FINANCIER, DIES, 86
Noted as Yachtsman - Was a Grandson of the Sheffield Scientific School Founder
John Jay Phelps of Red Towers, Hackensack, N.J., financier and yachtsman, who in1945 completed his fiftieth year as a trustee of United States Trust Company of New York, died Saturday in his summer home on Yoncomis Island, Stony Creek, Conn., after a brief illness. His age was 86. He also been a director of the Hackensack Trust Company. During the Spanish-American War he served as a lieutenant in the Navy, and in the first World War he commanded the squadron of submarine chasers. In 1885 he built and sailed the schooner yacht Brunnhilde around a world. The Brunnhilde was said to be the first American yacht to make such a trip. Born in Paris, France, Sept. 27, 1861, he was the son of William Walter and Ellen Sheffield Phelps. His father, a lawyer and a benefactor of Yale, had served as a Representative in Congress, Minister to Austria and to Berlin in the days when there were no United States Ambassadors and later a judged in the court of Errors and Appeals of New Jersey. His mother was a daughter of Joseph E. Sheffield, founder of the Sheffield Scientific School of Yale.
Started with Bank Here He was graduated from Yale in 1883, and spent the next two years in the employ of the Farmers Loan and Trust Company of New York. Since 1885 he had devoted himself to various financial enterprises. He was vice president of the Hackensack National Bank and a director of the Cayuga & Susquehanna Railroad.
For many years he was president of Strong & Trowbridge Company of New York and for two terms served as a member of the board of chosen freeholders of Bergen County, N. J.
During the Spanish-American War he was acting lieutenant and signal officer on the U. S. S. Celtic. During the first World War he commanded the U.S.S. Calumet with a rank of Captain.
In Many Organizations Mr. Phelps was a member of the American Museum of Natural History, New Jersey State Chamber of Commerce, American Geographical Society, New England Society, Founders and Patriots of America, American Forestry Association, United States Reserve Officers Association, Waterway League of America, Roosevelt Memorial Association, Naval Order of United States, Naval Relief Society, National Security League, National Marine League, National Child Welfare Association and National Association of Audubon Societies. He also belonged to the Big Brother Movement, the New York Zoological Society, New Jersey and Bergen County historical societies, American Legion, Sons of the American Revolution, Military Order of Foreign Wars, Navy League of United States, United Spanish War Veterans, Psi Upsilon Fraternity and Scroll and Keys Society of Yale. His clubs included the Union League, University, Yale, Circum-navigators, Submarine Chasers of America and Motor Boat of America in New York, the Graduate, Connecticut Auto and Motor of New Haven, the Lantern League of Boston, and Oritani Cruising Club of America. Surviving are two daughters, Mrs. Davenport West and Miss Rose Phelps. The New York Times, New York, NY, July, 1948, page 15
Posted by Melissa Davenport Berry at 9:20 AM No comments: