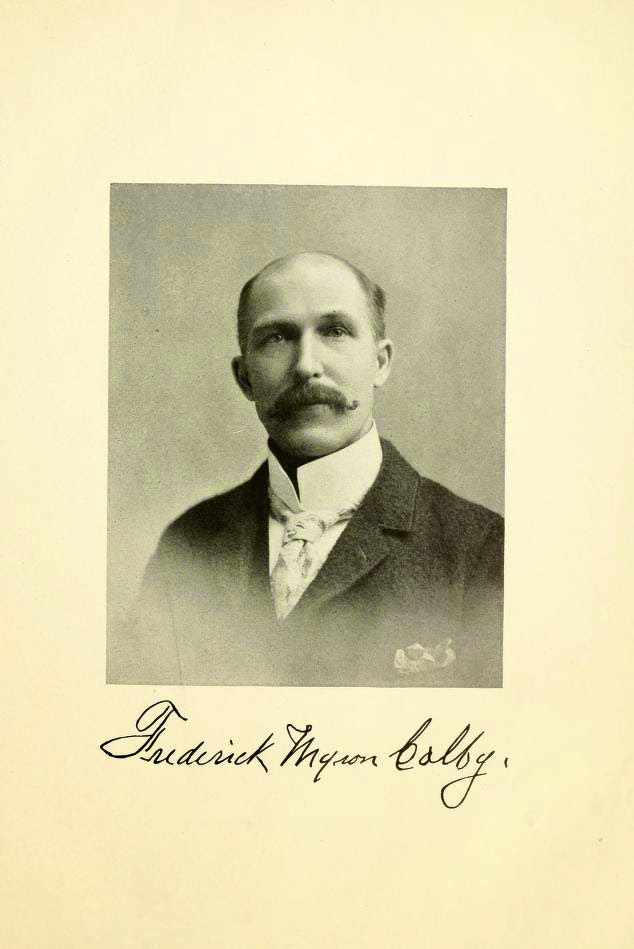 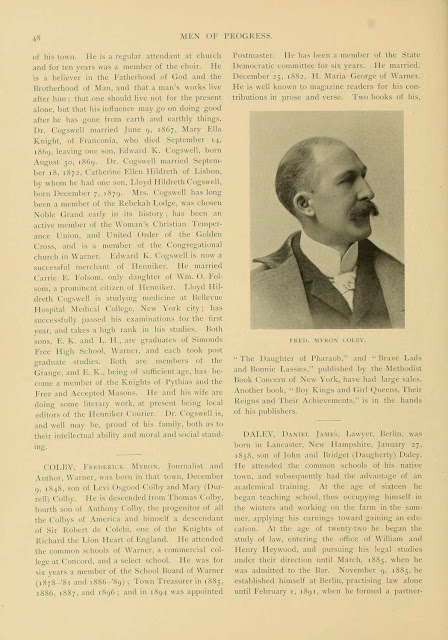 For a full list of his publications see Warner Historical Collections


THE GRAVE OF CHAMPERNOUNE.
By Frederick Myron Colby.

There is a dreary, dismal, wind-swept spot
Set on a rocky islet by the sea,
Marked by rude rocks, unsheltered by a tree;
Such, Champernoune, is thy sad and lonely lot.

The dashing waves their endless dirges chant
A requiem above thy lone, forgotten grave;
And sea mews circling o'er the gleaming wave,
Like winged ghosts thy burial cavern haunt.

Upon the isle the Summer sun shines down
With June's or August's fierce and sultry heat,
And Winter's drifting snows upon it beat,
While far off sleeps the dreamy, ancient town.

The ancient town upon whose busy street,
And within whose stately dwellings brave,
That now are silent as his lonely grave,
He once did traverse with proud, hasty feet.

His lordly manse that stood beside the tide,
Where once he feasted all his friepds in state,
Whose open doors have welcomed fair and great;
The park and gardens stretching free and wide,

Have perished long ago, and naught remains
To tell the splendor that within them reigned—
The flash of gold and dainty silks unstained,
The dancers' shadows athwart the lighted panes.

Gone, ever gone, those scenes of old renown;
The revel's past, the wassail and the mirth;
A mound of stone, a bit of rocky earth, This alone is left for thee, brave Champernoune.
And yet thou restest well, O gallant heart;

Thy sepulcher beside the restless sea,
Within the ken of thy loved Kittery,
And birds and winds to act the mourners' part.

Note.—Francis Champernoune, son of Sir Arthur Champernoune, a gentleman of Devon and a large landed proprietor of Maine and New Hampshire, lies buried on a bleak spot on Gerrish's Island. The grave is unmarked save by a rude pile of stones. Champernoune had royal blood in his veins and lived in grand style for those days. Gerrish Island was conveyed to him by Sir Fernando Gorges in 1657. He was for many years a member of the governor's council, and died in 1689.
From A Library Building Dedicated Date: Saturday, October 3, 1891 Paper: Springfield Republican (Springfield, MA) 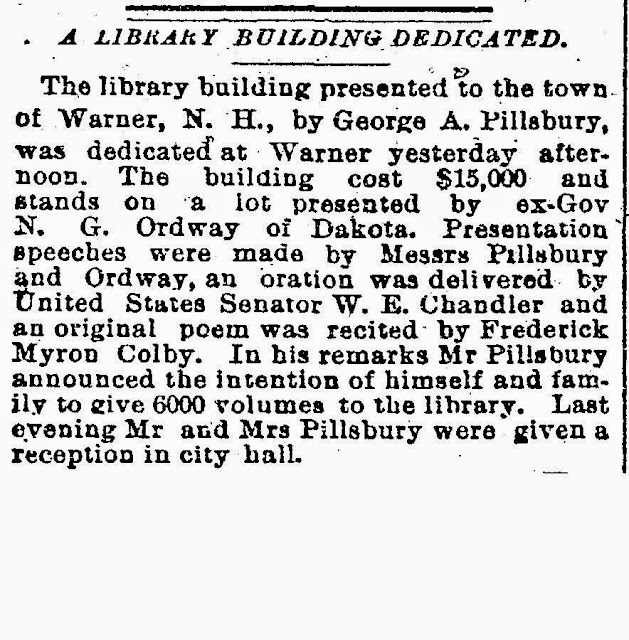 Below is a bio from  Merrimack and Sullivan Counties, New Hampshire Biographies
Frederick Myron Colby, of Warner, as well as all the Colbys of America, is descended from Anthony Colby, one of the Puritan colonists of Boston in 1630, who subsequently settled in Amesbury, Mass., where the house he dwelt in still stands. The second son of his father, Anthony was a lineal descendant of Sir Robert de Colebi, one of King John’s knights in 1199. The family seat was in the County of Norfolk, England. In early times the name was variously spelled Colby, Colebi, Coleby, Colebey, Colebei, Chaulby, Colbye, and Colebeye. The name of two English towns, as well as that of descendants of the family living in their vicinity, is Coleby; but the family estate in Swardest is called Colby Manor. A Danish form is Koldby. The Colby arms are “argent, a chevron engraved between three scallops, sable, the crest a plumed helm and an arm grasping a naked sword. The motto, ‘Vincit amor patriae.’” Anthony Colby, the American settler, had five sons and three daughters. From Thomas Colby, his fourth son, the line of descent was continued through Jacob, Valentine, Levi, Valentine, and Levi O. to Frederick Myron Colby. The following account of Mr. Colby is taken from the Twentieth Century Review for April, 1890 :-
“Frederick Myron Colby, the historical romancer and novelist and the most versatile writer in the Granite State, was born in Warner, N.H., December 9, 1848. He was the son of Levi O. and Mary (Durelle) Colby. His early education was obtained in the schools of his native town and of Concord. He never attended college, but his knowledge is extensive and sound. He is a good French and Latin scholar, has a wide acquaintance with English literature, and is familiar with all the old chronicles and sagas.
“Mr. Colby’s early life was passed on a farm. He has always been a hard worker with brain and muscle, and has a physique abundantly able to sustain much fatigue. For a number of years he was a successful school teacher in Merrimack County. He had written considerably for the local press when, in 1872, a novel of his, ‘The Pioneers of Kentucky ,’ was published by R. M. DeWitt, of New York. This successful venture was followed by other attempts in the same channel.
The winter of 1875-76 he spent in Washington, D.C., as the correspondent of Boston and New Hampshire papers; while several historical articles from his pen, of local interest, were written at the capital for some of the leading publications of the country. Mr. Colby may be regarded as a voluminous writer, having had published some thirty serial stories in various periodicals, quite a number of bound books, and over three hundred poems, besides numberless sketches and stories. His most meritorious work, from a purely literary standpoint, was a novel printed by the Methodist Book Concern, New York, in 1886, entitled ‘The Daughter of Pharaoh ,’ which has had a large sale. Another book, a juvenile for boys and girls, entitled ‘Brave Lads and Bonnie Lasses,’ was recently issued by the same house. He is at present engaged on a novel describing Oriental life in the days of Ahab and Jezebel, and he has also nearly ready a story of adventure for boys.
“As a townsman Mr. Colby is a valuable citizen; and socially he is much of a favorite, though somewhat inclined to be reserved in unfamiliar or uncongenial company. He is six feet in height, of fine physique and courteous manner. With a comfortable income from his pen, he lives as near, perhaps, as any one ever does the author’s ideal life, in the pleasant village of his native town.”
In 1882 Mr. Colby was united in marriage to Miss Hannah Maria George, daughter of Gilman C. George, a leading resident of the town. Since he came of age, Mr. Colby has been a candidate repeatedly for every office in town. He has been Town Treasurer four years, a member of the School Board six years, and Postmaster four years. He has been a Trustee of the Pillsbury Library since its establishment. Mr. Colby is a member of the New Hampshire Historical Society, of the New Hampshire Antiquarian Society, and an honorary member of the Manchester Press Club. 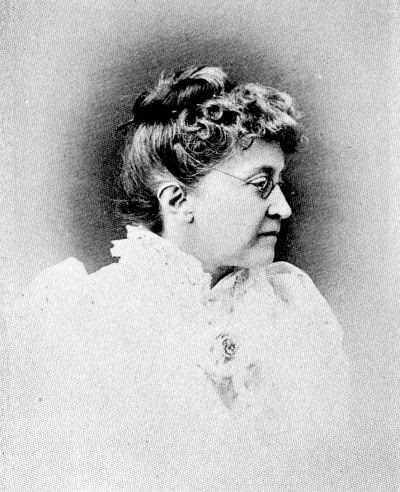 MRS. H. MARIA GEORGE COLBY was born in Warner, N. H., October 1, 1844. She is the daughter of Gilman C. and Nancy (Badger) George, and is of English descent on both sides of the family; the Georges, in fact, have a coat of arms that dates back to the ancient days of chivalry. Mrs. Colby is a social leader and an authoress. She early developed strong literary tastes, and while in her teens wrote a number of novelettes that were published In New York and Philadelphia houses. Later she paid more attention to the magazines and newspapers, and she became an acknowledged authority upon domestic topics. Circumstances have rendered it impossible for her to give her whole time to literary work, but her articles have appealed in the Housewife, the Housekeeper, the Housekeeper's Weekly, the Christian at Work, Demores Cs Monthly Magazine, Arthurs Home Magazine, Youth's Companion, the Congregationalist, the Portland Transcript, Ladies' World, Good Cheer, the Philadelphia Press, the Chicago Ledger, the Golden Rule, Good Housekeeping, and St. Nicholas. She was for five years the fashion editor of the Household. She has made use of various pen names, but is best known to editors and the public by her maiden name, H. Maria George. A stanch advocate of temperance, and equal rights for both sexes, she furthers these as well as every other good work by her pen. In December, 1880, Miss George was united in marriage to Frederick Myron Colby, the well known litirateur. Their pleasant home is in Warner. From New Hampshire women: A collection of portraits and biographical sketches of daughters and residents of the Granite state 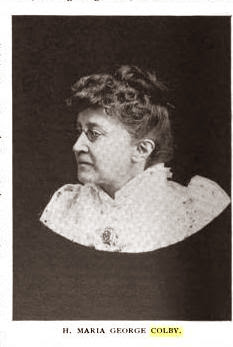 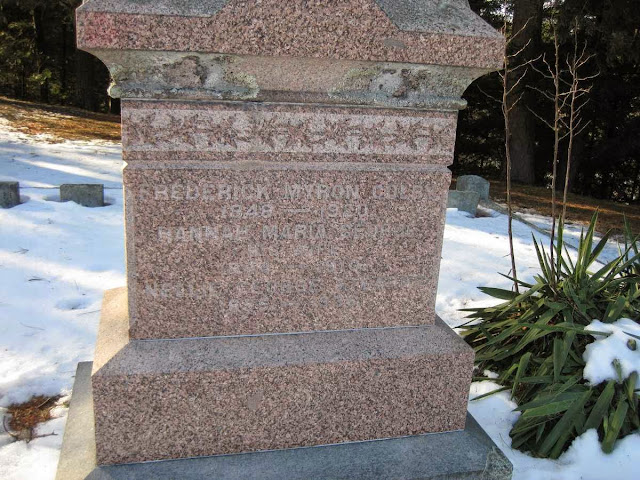 Posted by Melissa Davenport Berry at 6:27 AM No comments: