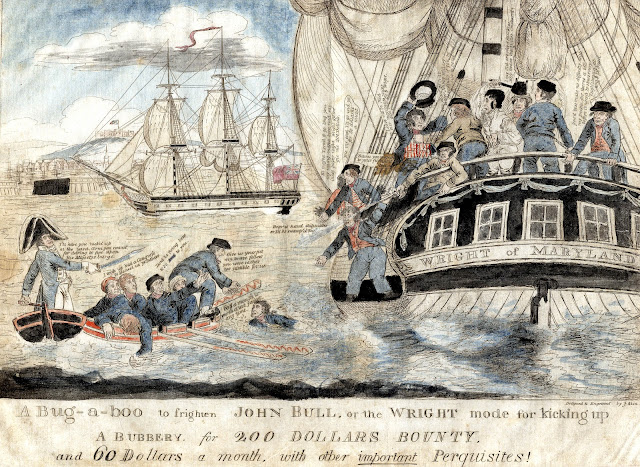 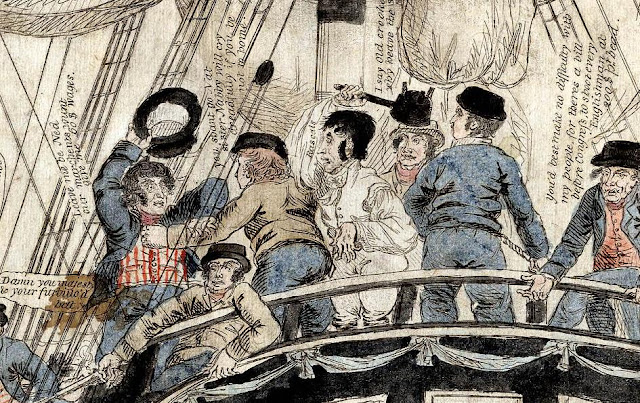 It's possible that A Bug-a-boo to Frighten John Bull... was one of the last caricature prints Akin produced before he left Newburyport in October 1807 and returned to his native Philadelphia. He certainly is not known to have produced any more caricatures featuring Blunt after this period and by 1808 he appears to have begun another equally caustic feud with a Philadelphia bookseller called Richard Folwell, who replaced Blunt at the chief target of Akin's satirical invective. This therefore gives us a further indication that the print was almost certainly produced in 1806.
James Akin appears to have abandoned caricature and printmaking altogether between 1811 and 1819 and he disappears entirely from the Philadelphia trade directory during this period. This is a shame because one can imagine that the combination of his acidic wit and ardent Federalism could have resulted in him producing some fascinatingly unconventional satires during the War of 1812.
[1]. A Bug-a-boo to Frighten John Bull... was one of the few American prints from this period to be found amongst the collection Edward Hawkins (1780 - 1868) in London and it is also claimed that Akin's Infuriated Despondency! was transfer printed onto Liverpool creamware in England. See F.B. Sanborn, 'Thomas Leavitt and his Artist Friend, James Akin' Granite Monthly 25, No. 10, pp. 226 - 227.
Posted by Melissa Davenport Berry at 6:34 AM No comments: