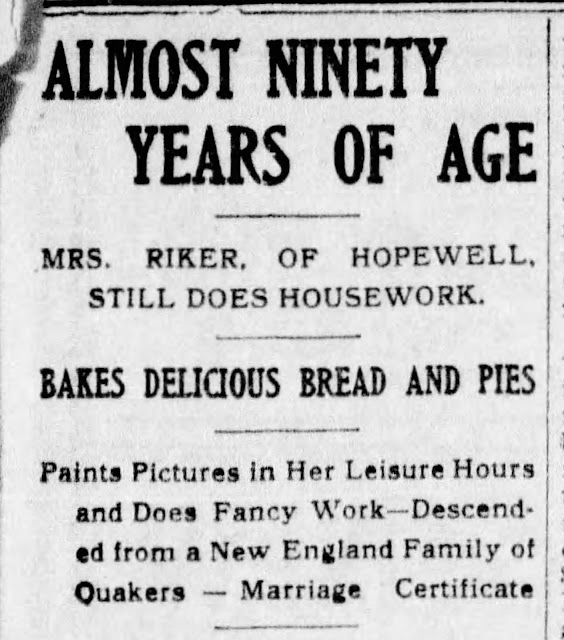 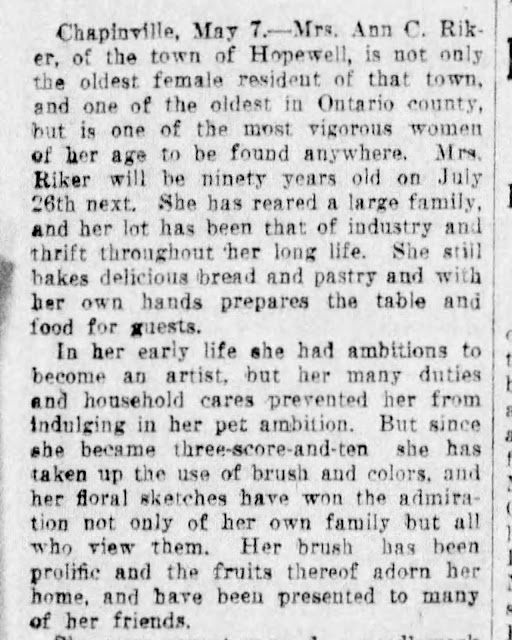 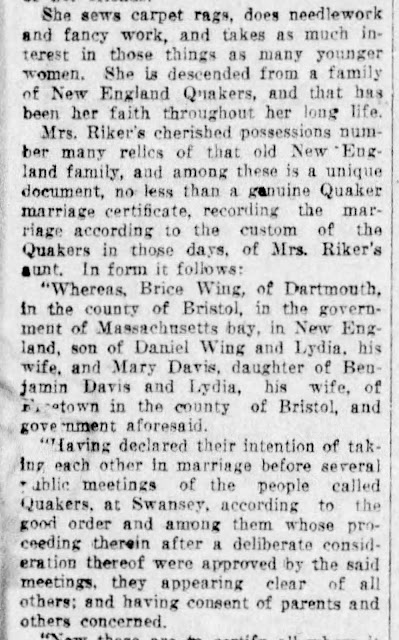 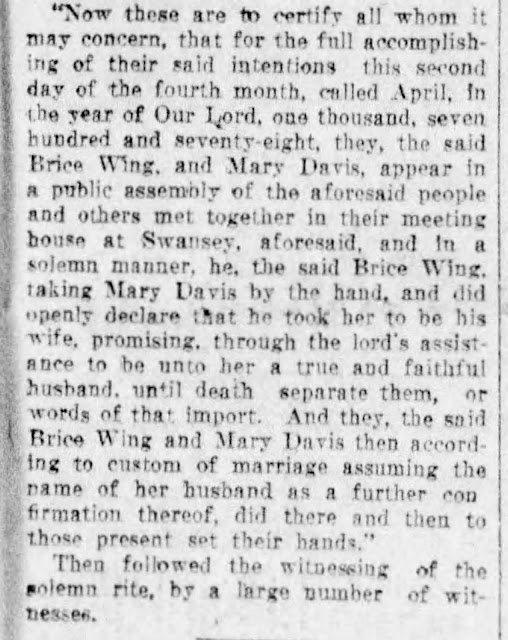 In 1892 John Nurse, a descendant of Rebecca Nurse who was executed for witchcraft in the Salem Witch Hysteria 1692 gave an address on the Salem Witchcraft Trials to the Nurse Family Association. Rebecca Nurse was the  daughter of William Towne and Joanna Blessing of Topsfield, Massachusetts. Rebecca’s two sisters, Mary Towne Esty/Easty and Sarah Towne Cloyse were also tried for witchcraft in 1692. Mary was executed and Sarah was released. See Three Sovereigns for Sarah Also See Post on Bible of Esty/Easty Family and What Ghost Hunters Found in Topsfield Hangers and Symbolism 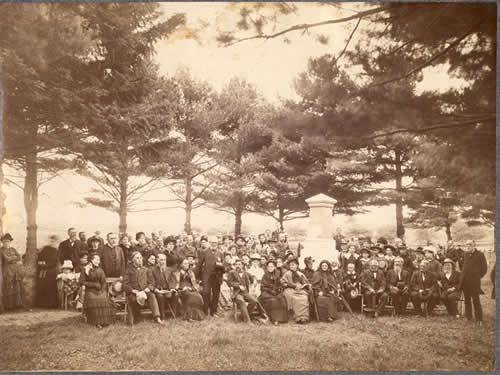 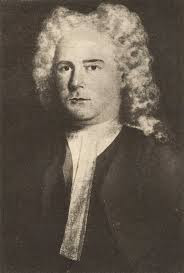 One topic which John Nurse spoke on was the letter written in August of 1692 to Judge Jonathan Curwin (Photo below) singed with the initials “R P” which is agreed by most scholars to be Robert Pike, of Salisbury, Massachusetts. (Some believe this letter was written by Robert Payne). 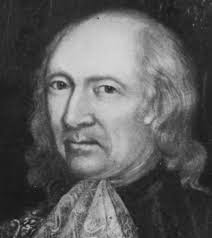 I was intrigued by this article* published in The Springfield Republican 1879 entitled Our Boston Literary Letter. Puritans, Witches and Quakers The Life of Robert Pike The letter delivered to Judge Curwin was dated in Salisbury, Massachusetts and in the handwriting of Captain Thomas Bradbury, Recorder of old Norfolk County. Bradbury’s wife, Mary Perkins Bradbury, was arrested for witchcraft and was jailed at the time as Rebecca Nurse. Charles Wentworth Upham in his book Salem witchcraft; with an account of Salem Village, and a history of opinions on witchcraft and kindred subjects, Volume I and II provides a copy of the letter and is available on line University of Virginia site.

Pike was speaking for the victims, although many examples he refers to are his defense was gearing toward Mary Perkins Bradbury is probably correct. Pike was close with her family and he served in many civil positions with her husband Captain Bradbury.
It is certain that Justice Curwin took great stock in this letter as James Shepherd Pike points out, "the fact that Jonathan Curwin preserved this document, and placed it in the lilies of his family papers, is pretty good proof that he appreciated the weight of its arguments. It is not improbable that he expressed himself to that effect to his brethren on the bench, and perhaps to others.”
What is important to note is that Pike was extremely progressive and was under constant scrutiny despite his high position. (with exception of Rev Dane in Andover and Rev Hale in Beverly) he was a voice of reason and logic. Pike advocated for many including Thomas Macy, James Peaslee, and the three Quaker women of Dover made famous by John Greenleaf Whittier in The Three Women of Dover. Mary Perkins Bradbury was not the only one in the family tree under on the hit list, Lydia Perkins Wardwell was whipped in public for her Quaker belief. More on that below.
In a well written letter Pike brings into question the conduct of the judges, the validity of the hearings, and “controverts and demolishes the principles on which the Court was proceeding in reference to the “spectral evidence,” and the credibility of the “afflicted children” generally.
However, Rebecca Nurse’s case was definitely of interest. Her brother Joseph Towne married Phebe Perkins, daughter of Deacon Thomas Perkins and Pheobe Gould. Thomas Bradbury was the sister of Mary Perkins Bradbury.
One of the motivations to target Rebecca was her connection with Quaker families. Douglas Bowerman, a direct descendant utilized the research Margo Burns compiled to trace his family line. The archival records  from Burns work reveal  that on April 26 1677 “a guardianship decision by the court allowing John Southwick to chose Frances Nurse (husband to Rebecca Nurse) to be guardian of his son Samuel and Thomas Fuller to be Guardian to his son John.” Lawrence Southwick and his wife Cassandra were banished from Salem for their Quaker beliefs
Emerson Baker in A Storm of Witchcraft proposes that, “Suspicion may even have fallen on respected Puritan saint Rebecca Nurse because of Quaker ties,” when she assumed guardianship role for the Southwick children. In his earlier book, The Devil of Great Island: Witchcraft and Conflict in Early New England, Baker also notes that many scholars have uncovered evidence that several accused of witchcraft in the Salem 1692 Witch trials were associated with Quakers. Bakers asserts, household members, neighbors, , that were Quakers.”
There were connections and definite conflicts with families that were tied to Quakers.  I have published two articles in Genealogy Magazine on the PERKINS line. The first is “The Witchcraft Trial of Mary Perkins Bradbury” and second, her relative Lydia Perkins Wardwell, daughter of Issac Perkins, brother of Jacob Perkin, Mary’s father. Lydia suffered from the Quaker persecutions and was targeted by families who provided testimony that lead to her conviction. Lydia’s story  “Seventeenth Century Quaker Sought Redress by Undressing” describes the ordeal. I plan to publish a third article on how these families lines continue to intertwine. Most of the feuds can be traced back to early settlements all through New England.
Our Boston Literary Letter. Puritans, Witches and Quakers. The Life of Robert Pike - New Hampshire Wednesday, April 23, 1879 Springfield Republican (Springfield, Massachusetts) 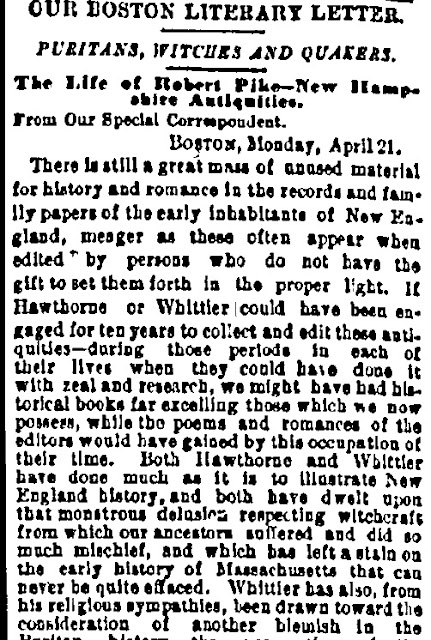 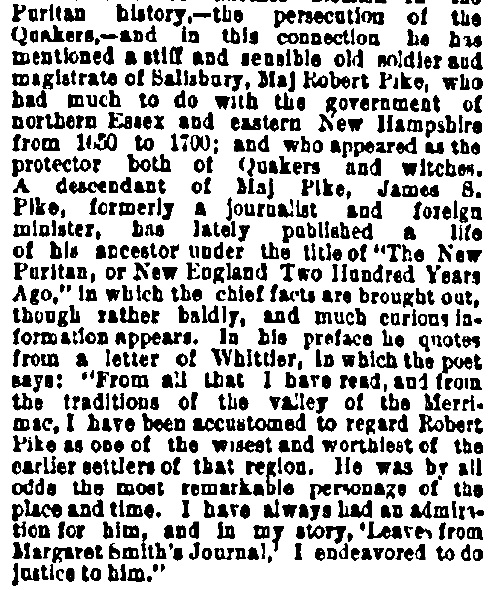 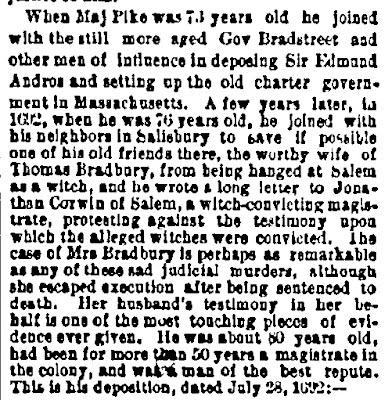 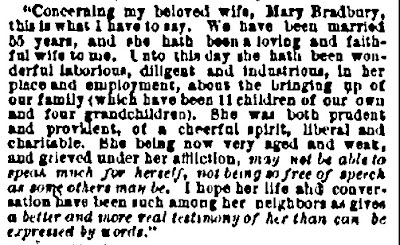 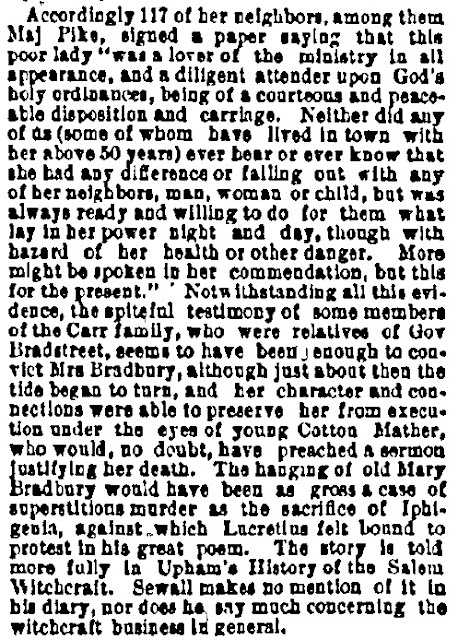 Documents from The Salem Witch Trial Rebecca Nurse  The Petition Friends of Rebecca Nurse writing a letter on her behalf that all charges be dismissed against her, and Examination Document, 1692 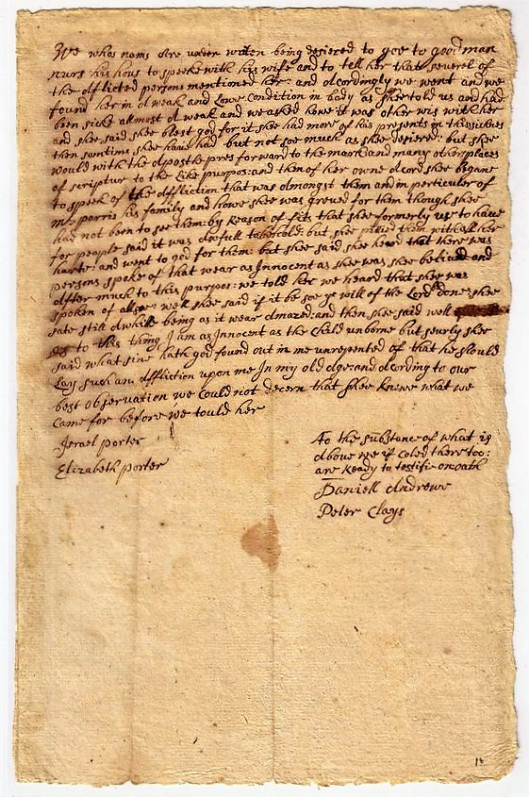 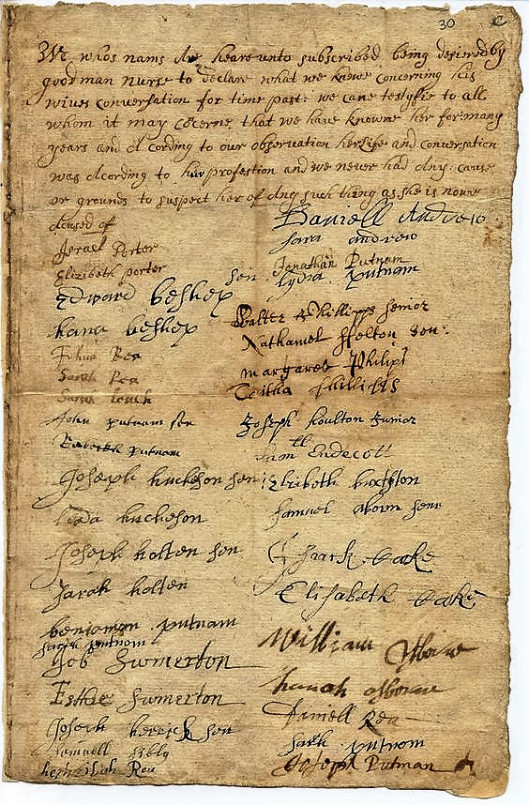 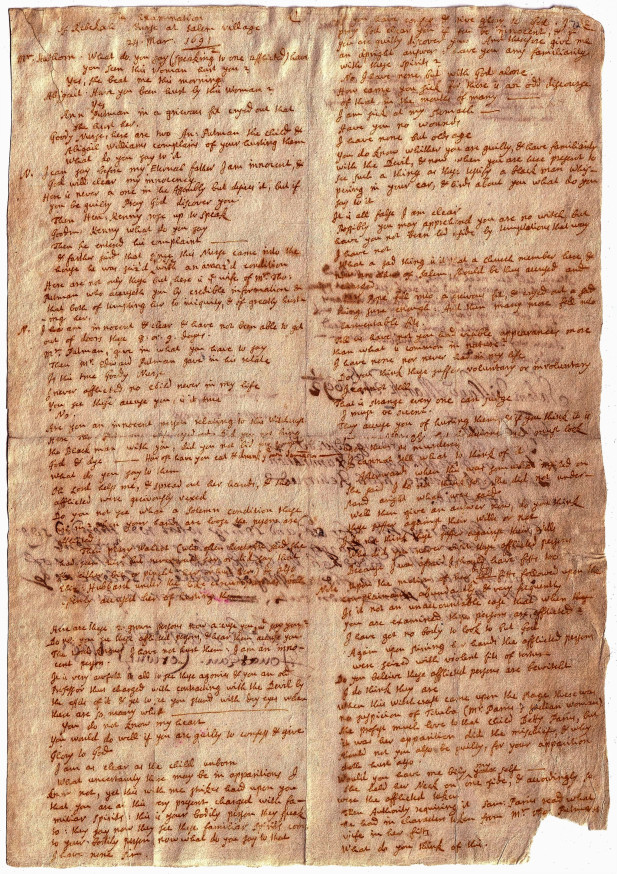 Posted by Melissa Davenport Berry at 6:24 AM 2 comments: 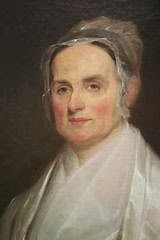 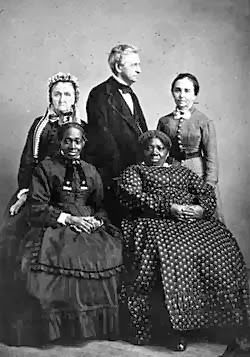 She spoke at the International Anti-Slavery Convention that was held in London, England in 1840. She, along with other women attendees such as Baroness Byron, was included in the commemorative painting of the convention. 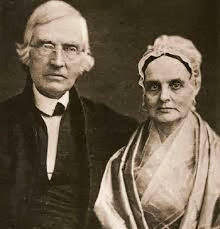 Lucretia was a descendant of Thomas and Margaret through son Richard. Both of her parents Thomas Coffin and Anna Folger were from families who arrived early to New England.
Anna Folger b. 25 March 1771, d. 26 March 1844 daughter of William Folger b. 24 Jul 1728, d. 4 Jun 1815 and Ruth Coffin b. 9 Apr 1733, d. 11 Mar 1814
Thomas Coffin, son of Benjamin Coffin and Deborah Macy, in 1789; (m. in 12-1789). Anna Folger died on 26 March 1844 at Philadelphia at age 73.  Nantucket Historical Full Genealogy
She grew up on Nantucket Island and then attended a Quaker School in New York (Nine Partners Meeting House and Cemetery). After graduating, she also taught at the school which is where she met her husband James Mott (20 June 1788 – 26 January 1868). Lucretia, in 1864, helped found Swarthmore College.
Credit: Courtesy of Friends Historical Library of Swarthmore College.
"Roadside" – residence of Lucretia Mott,1319 Chestnut St., Philadelphia Old York Road (now Fairmont Park) Lucretia Mott is in the chair in the foreground. 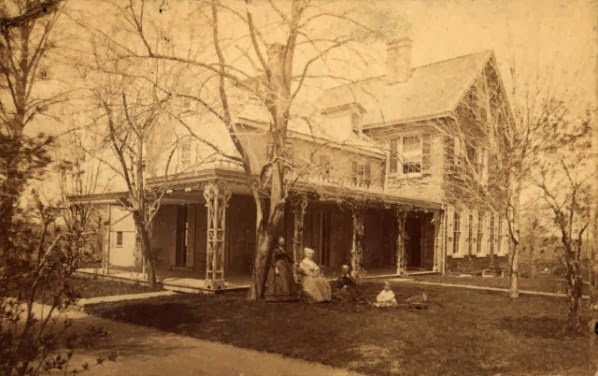 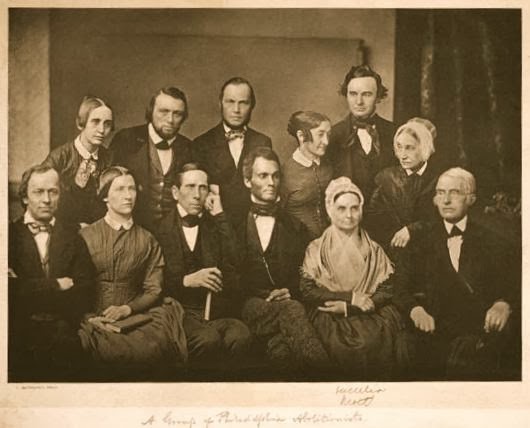 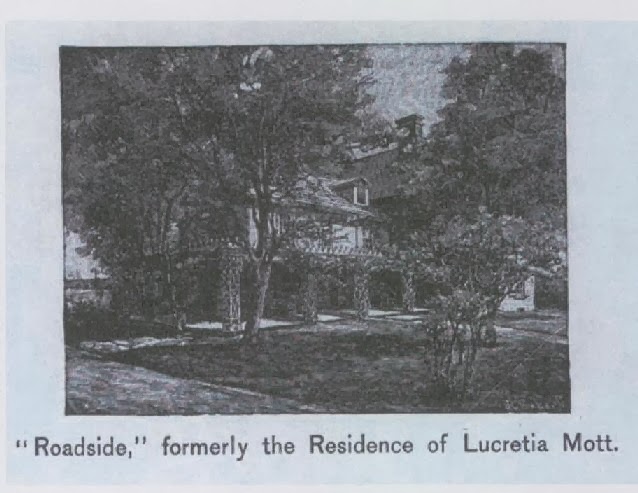 Old article found on Quaker persecutions. If you would like a copy pdf sent to you for a cleaner read please post a request or contact me
Date: Saturday, October 20, 1849
Paper: Boston Evening Transcript (Boston, MA)

Posted by Melissa Davenport Berry at 10:28 AM No comments:

Gwen Boyer Bjorkman is a genealogical researcher. This article first appeared in the National Genealogical Society Quarterly, v 75 no 4 (Dec 1987). It won the 1987 Family-History Writing Contest of the National Genealogical Society. It is usually difficult to document the lives of colonial women. As a category, they left few legal documents. Yet through sundry records, it is possible to reconstruct the life of one remarkable woman - Hannah (Baskel) Phelps Phelps Hill. One does not read about Hannah in standard histories of early America, yet she held the first Quaker meeting in the Massachusetts Bay Colony in her home in Salem and later opened her home to the first Quaker meeting in the Albemarle settlement of Carolina. She was truly the Proverbs 31 Lady. After all these years “her children (will now) rise up and bless her saying: ‘Many daughters have done noble, But you excel them all!’ Despite her accomplishments, however, Hannah did not set out to be a noble heroine. She emerges in history as a young woman - human and alone, as far as family is concerned. The search for Hannah began in the records that men have left to chronicle the past. Before 1652, she came to the Massachusetts Bay Colony from England. An undated deposition of one Jane Johnson provides the only record of Hannah’s maiden name, Baskel. It reveals that, at the time of the deposition, Hannah was the wife of Nicholas Phelps but at the date of “coming over on the ship,” she was in the company of his brother, Henry. The document labels her a “strumpet.” Obviously, Hannah was a woman of independent mind not inclined to conform to the dictates of convention. This trait was to her blessing, scorn, and persecution.
"'Deposition of Jane Johnson: Saith yt: coming ov’ in the ship with Henry Phelps and Hannah the now wife of Nich: Phelps: Henry Phelps going ashore the ship lying at the Downes: Hannah wept till shee made herselve sick because mr Fackner would not suffer her to goe ashore with Henry Phelps: and Henry came aboard late in the night, the next morning mr Falckner Chid Henry Phelps and Hannah and said was it not enough for y’ to let Hannah lay her head in y’ lapp but must shee ly in ye Cabbin to and called Hannah Strumpet and this deponent saith farther yt she saw Henry Phelps ly in his Cabbin. Y when he was smocking in the Cook roome tobacco Hannah tooke the pip out of his mouth, etc., etc.'
One Henry Phelps arrived in the Massachusetts Bay Colony in 1634 on the ship Hercules, under John Kiddey, Master. His destination was said to be Salem. However, the Phelps family may have been in Salem before this date. It is known that Eleanor Phelps, mother of Henry and Nicholas Phelps, had married Thomas Trusler of Salem and that they were members of the first church in Salem in 1639. One historian holds that Trusler probably came to Salem in 1629, when a kiln for the burning of bricks and tiles was built, and that he continued this business until his death in 1654. There has been found no record of a previous wife or children for Trusler in Salem, so it is possible that Eleanor married him in England and came to the Bay Colony with him and her five Phelps children. Eleanor mentions in her 1655 will 'the legacy bequeathed by my Late husband to his Daughter in England.' Trusler’s will has been lost. The inventory of his estate has been preserved.” 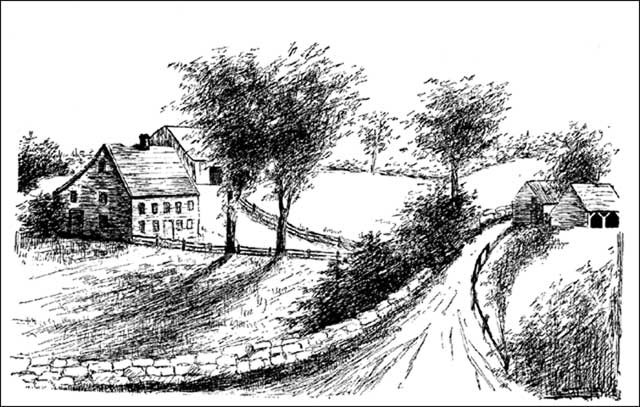 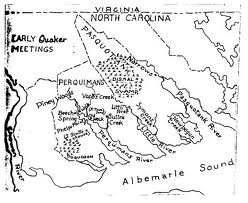