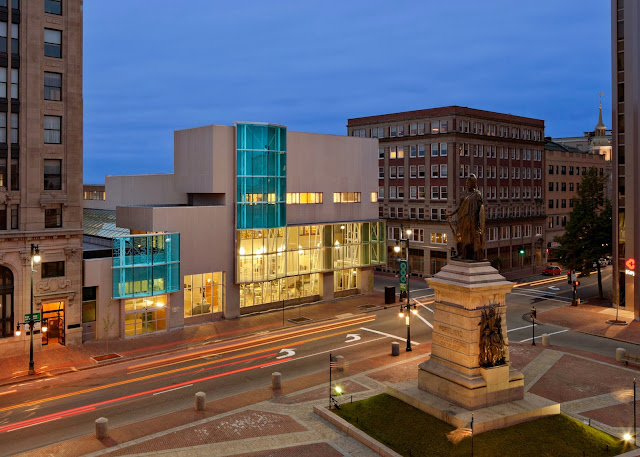 A glorious day in Maine. Barbara picked me up and off we went for a two hour schooner cruise around Portland's harbor. Sponsored by the Maine Historical Society, the cruise featured a perspectives on the history of the area as well as gorgeous views of lighthouses, islands, and rocky shores.
We had a late lunch on the water front and then headed to the Maine Historical Society for one quick hour of research.
We found another gold mine of preserved papers on our family - not nearly enough time to get through them. We will have to start again on Tuesday. We did find a will of Ezekiel Cushing plus other Cushing family data which tie three generations together (Hannah Cushing [who married Stephen Tukey], her father Jeremiah and her grandfather Ezekiel). To give you a flavor of Ezekiel's six page will, I have copied the opening paragraph:
"In the name of God amen. I Ezekiel Cushing of Falmouth in this County of Cumberland and the Province of the Massachusetts Bay in New England. Esq. being disordered in the body but of sound mind and memory (Blessed be God) calling to mind that it is appointed to all men to die, do this eleventh day of April in the fifth year of the reign of George the third, King of Great Britain, reg, and in the year of our Lord 1765 make and publish this my last will and testament in manner and form following."
I love the language, so different than the shortened, spare prose of current times. We also got leads on land grants and property exchanges (they are indexed in paper form through 1735 then indexed and preserved on microfilm for 1735-1800). The originals should be at the Cumberland County courthouse. We shall see - more tasks for Monday and Tuesday. More miscellany - We will not find a will for John Tukey since there was a fire in the courthouse in the early 1800s so the only wills and probates available are from 1808 forward - unless copies have been preserved by the family. We may be able to find Abigail Sweetser Tukey's since she died in 1837.
We then ran over to the Portland Public Library (open til 5pm). There we found lists of marriages which Barbara copied and I found several land transfers witnessed or participated in by Seth Sweetser, Ezekiel Cushing, or Jeremiah Cushing. The deeds establish that these 3 men were in Portland/Falmouth by 1731 - nice to have a verified date.
That's all for today. Ghost tour at the cemetery tomorrow!
Posted by Melissa Davenport Berry at 7:50 PM 1 comment: