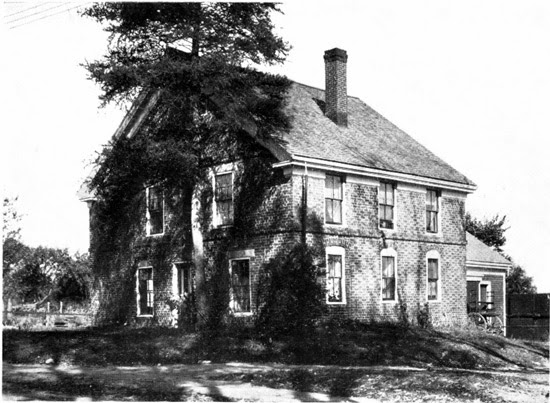 Photo by W. R. Merryman DUSTON GARRISON HOUSE, HAVERHILL, MASS. The attention of visitors to Haverhill, Massachusetts, is attracted to a great granite boulder set in a place of honor in the old town. When they ask about it they are told the story of Hannah Duston, heroine. See New England Folklore 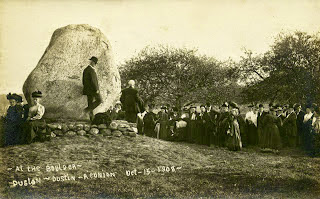 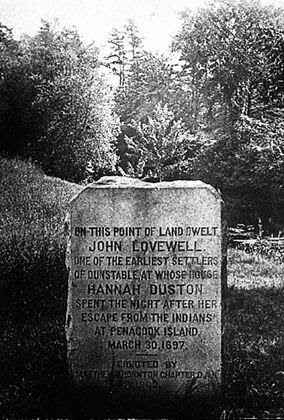 Photo from Jill's World Research
There are many versions of the story and I have posted a potpourri of opinions. John Greenleaf Whittier "The Mother's Revenge"  and Nathaniel Hawthorne had a more sinister view of Hannah Duston than the glorified female pioneress of the old folk tales.
Read The JG Whittier News letter Spring 2003
John Greenleaf Whittier, “The Mother’s Revenge” From Legends of New England (1831)

From the Archives Written by Historical Society of Pennsylvania and Fellow of the American Geographical Society Republished 1918 by George H. Doran Company
Thomas and Hannah Duston were married in 1677, and at once built a humble house of imported brick on the spot where the boulder now stands. Frequently one of the bricks is uncovered on the site; those who examine it marvel at the thought of the building material brought across the sea. Hannah was born Hannah Emerson, daughter of Michael Emerson and Hannah Webster.
Hannah Webster was daughter of John Webster and Mary Emery
Later Thomas Duston uncovered deposits of clay near his home which led him to make experiments in brick making. He was so successful that his product was in demand; villagers said that the Haverhill bricks were fully as good as those brought from England. 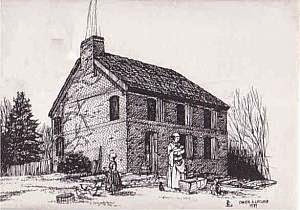 Strong building material was needed, for hostile Indians were all about. In order to afford protection against them, Mr. Duston determined to build a new house, which should serve as a garrison in time of danger. By the village authorities he was appointed keeper of the garrison, as this commission shows: "To Thomas Duston, upon the settlement of garrisons. You being appointed master of the garrison at your house, you are hereby in his Maj's name, required to see that a good watch is kept at your garrison both by night and by day by those persons hereafter named who are to be under your command and inspection in building or repairing your garrison, and if any person refuse or neglect their duty, you are accordingly required to make return of the same, under your hand to the Committee of militia in Haverhill." 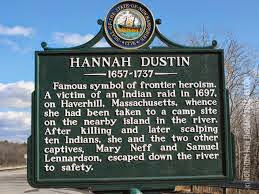 The new house was well under way when this command was given. As it is still standing, it is possible to tell of its construction. A Haverhill writer says that "white oak, which is to-day well preserved, was used in its massive framework, and the floor and roof timbers are put together with great wooden pins. In early days the windows swung outward, and the glass was very thick, and set into the frames with lead." On March 15, 1697, the watching Indians decided that their opportunity had come to attack the village. They knew that if they waited for the completion of the new garrison, there would be little chance of success. So they struck at once. 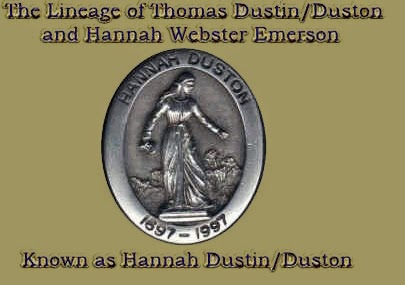 The story of what followed was told by Cotton Mather, in his "Magnalia Christi Americana," published in London in 1702:
"On March 15, 1697, the Salvages made a Descent upon the Skirts of Haverhill, Murdering and Captivating about Thirty-nine Persons, and Burning about half a Dozen Houses. In the Broil, one Hannah Dustan having lain-in about a Week, attended with her Nurse, Mary Neffe a Widow, a Body of terrible Indians drew near unto the House where she lay, with Design to carry on their Bloody Devastations. Her Husband hastened from his Employment abroad unto the relief of his Distressed Family; and first bidding Seven of his Eight Children (which were from Two to Seventeen Years of Age) to get away as fast as they could into some Garrison in the Town, he went in to inform his Wife of the horrible Distress come upon them. E'er he could get up, the fierce Indians were got so near, that utterly despairing to do her any Service, he ran out after his Children.... He overtook his children about Forty Rod from his Door, ... a party of Indians came up with him; and now though they Fired at him, and he Fired at them, yet he Manfully kept at the Reer of his Little Army of Unarmed Children, while they Marched off with the Pace of a Child of Five Years Old; until, by the Singular Providence of God, he arrived safe with them all unto a Place of Safety about a Mile or two from his House.... 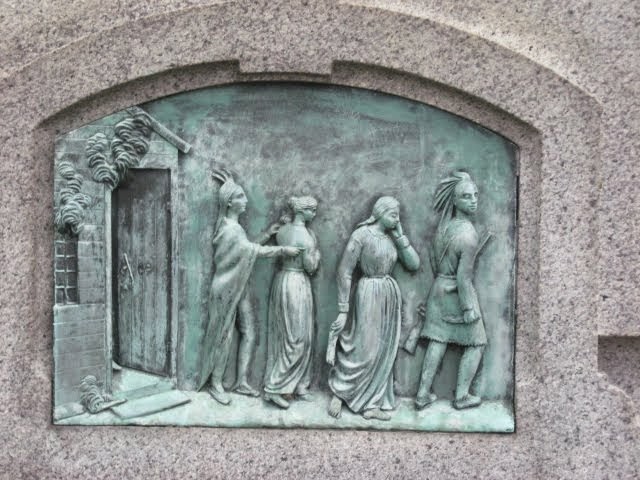 "The Nurse, trying to escape with the New-born Infant, fell into the Hands of the Formidable Salvages; and those furious Tawnies coming into the House, bid poor Dustan to rise immediately....
"Dustan (with her Nurse) ... travelled that Night about a Dozen Miles, and then kept up with their New Masters in a long Travel of an Hundred and Fifty Miles....
"The poor Women had nothing but Fervent Prayers to make their Lives Comfortable or Tolerable, and by being daily sent out upon Business, they had Opportunities together and asunder to do like another Hannah, in pouring out their Souls before the Lord."
The Indians were "now Traveling with these Two Captive Women, (and an English Youth taken from Worcester a Year and half before,) unto a Rendezvous of Salvages which they call a Town somewhere beyond Penacook; and they still told, these poor Women, that when they came to this Town they must be Striped, and Scourged, and Run the Gantlet through the whole Army of Indians. They said this was the Fashion when the Captives first came to a Town;...
"But on April 30, while they were yet, it may be, about an Hundred and Fifty Miles from the Indian Town, a little before break of Day, when the whole Crew was in a Dead Sleep ... one of these Women took up a Resolution to imitate the Action of Jael upon Sisera; and being where she had not her own Life secured by any Law unto her, she thought she was not forbidden by any Law to take away the Life of the Murderers.... She heartened the Nurse and the Youth to assist her in this Enterprise; and all furnishing themselves with Hatchets for the purpose, they struck such home Blows upon the Heads of their Sleeping Oppressors, that e'er they could any of them struggle into any effectual resistance, at the Feet of those poor Prisoners, they bow'd, they fell, they lay down; at their Feet they bowed, they fell; where they bowed, there they fell down Dead."
One old squaw and a boy of eleven escaped to the forest. The scalps were not taken at first, but soon Hannah Duston returned to the camp and gathered the trophies, in order that she might claim the bounty offered by the colony for the scalps of hostile Indians. Then all the Indians' canoes were scuttled, their arms were taken, and the party of three embarked. 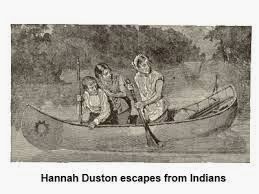 Day after day they paddled down the Merrimac, the three taking turns in the unaccustomed labour. At night they paused to rest. Cautiously a fire was kindled, and food was cooked. Always they feared discovery by the bands of Indians. Two slept, while a third stood guard. But no Indians appeared.
At last the home village was in sight. The wondering villagers came out to see who the visitors could be. Their astonishment and delight can be imagined.
The General Assembly of Massachusetts voted Mrs. Duston twenty-five pounds' reward, while a similar amount was divided between Mrs. Neff and the boy Samuel Lennardson. Later the governor of Maryland sent Mrs. Duston a silver tankard.
The Duston descendants, who hold a reunion every year, prize these souvenirs. But most of all they prize a letter (the original of which is in the possession of the Haverhill Historical Society) written by Mrs. Duston in 1723, in which she gave a wonderful testimony to God's goodness to her and hers. This is the message she gave to children and grandchildren:
"I Desire to be thankful that I was born in a Land of Light & Baptized when I was young and had a good education by my Father, tho' I took but little notice of it in the time of it—I am Thankful for my Captivity, 'twas the Comfortablest time that ever I had. In my Affliction God made his Word Comfortable to me. I remember ye 43 ps. ult. [probably meaning last part] and those words came to my mind—ps. 118:17—I have had a great Desire to Come to the Ordinance of the Lord's Supper a Great while, but fearing I should give offense and fearing my own Unworthiness has kept me back. Reading a Book concerning X's Sufferings Did much awaken me. In the 55th of Isa. beg [beginning] We are invited to come: Hearing Mr. Moody preach out of ye 3rd of Mal. 3 last verses it put me upon Consideration. Ye 11th of Matt., ending, has been encouraging to me—I have been resolving to offer my Self from time to time ever since the Settlement of the present Ministry. I was awakened by the first Sacramental Sermon [Luke 14:17]. But Delays and fears prevailed upon me: But I desire to Delay no longer, being Sensible it is my Duty—I desire the Church to receive me tho' it be the Eleventh hour; and pray for me that I may honer God and receive the Salvation of My Soul. "Hannah Duston, wife of Thomas" Mrs. Duston lived in the old house at Haverhill for many years after her remarkable escape. 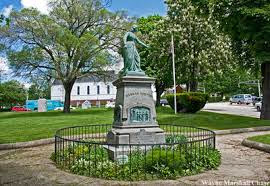 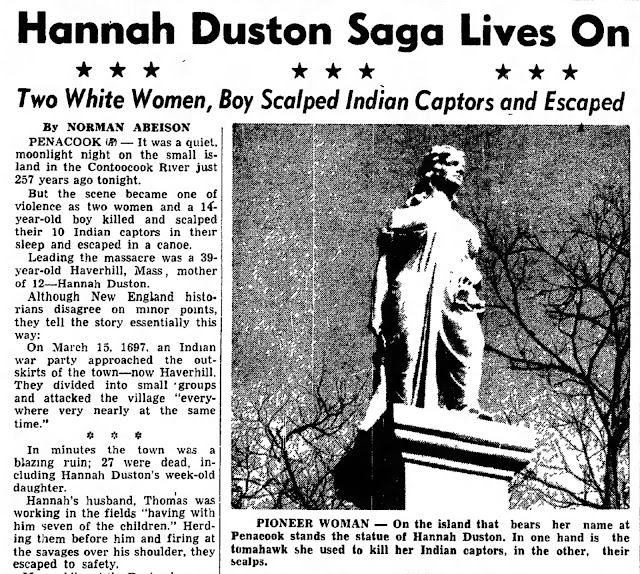 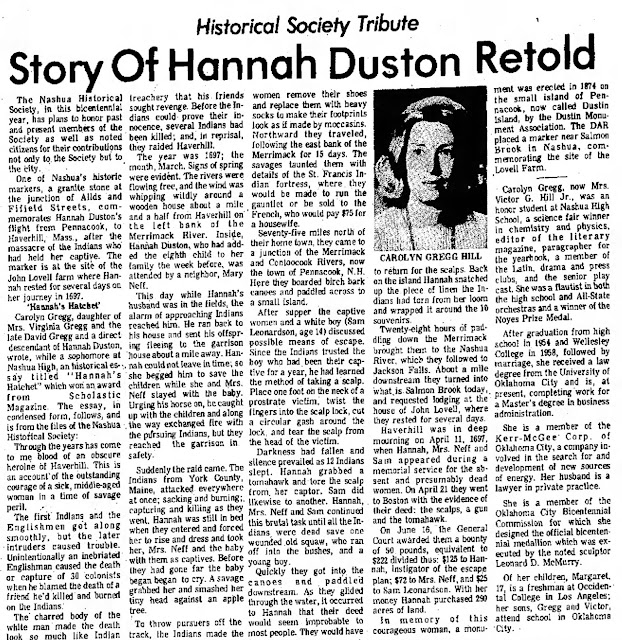 Other Reads to Check out 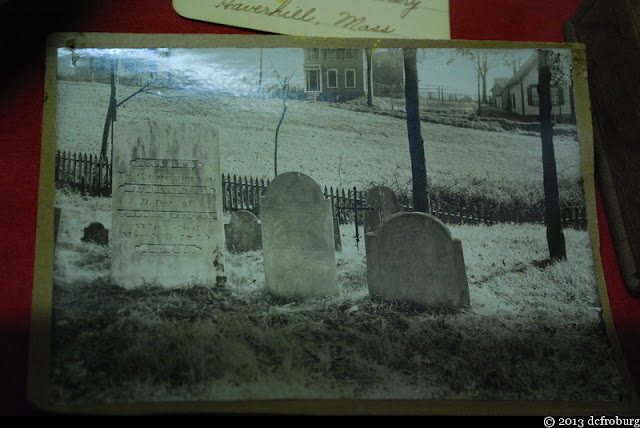 Posted by Melissa Davenport Berry at 4:14 PM No comments: