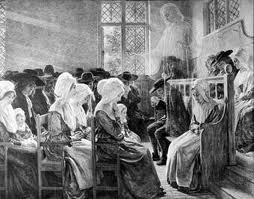 Even more of a mystery is the whereabouts of Lydia’s petticoat. According to the story, she was wrapped in cloth and shuffled off to Hampton very abruptly. Her garments were left for safekeeping with fellow friend of the light Gov. John Easton, who perhaps stood outside to cheer his prophetess on. Though her petticoat may never be found, Lydia Wardell certainly taught us that the naked truth is always better than a well-dressed lie.
Posted by Melissa Davenport Berry at 3:15 PM 8 comments: