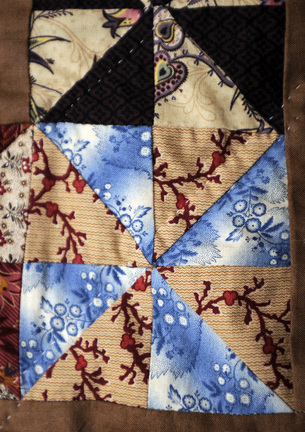 LONDONDERRY — A 30-by-70-inch quilt sewn by Martha McCarthy is on its way to Sackets Harbor, N.Y.

McCarthy's 1812-style quilt, "For Thomas," will be part of the Great Lakes Seaway Trail War of 1812 Bicentennial Quilt Show later this month.
The journey started when the Londonderry resident saw a notice for a quilters' challenge in a trade magazine. Quilters were encouraged to craft reproduction "cot-to-coffin" quilts for the bicentennial of the War of 1812.
"It interested me because I grew up in western New York," McCarthy said. "The War of 1812 was stressed in our education. Being a transplanted New Yorker, although I've been here more than 30 years, it just interested me."
McCarthy also has a particular interest in antique quilts. A quilter for some 40 years, she is part of an informal group of quilters in Massachusetts who are studying antique quilts.
This particular challenge had some guidelines. Size matters. Cot-to-coffin quilts were sewn for soldiers heading off to war. The quilts covered them in their cots and also served as covers for their coffins should they die in battle.
"They were made specifically for a soldier," said Kara Lynn Dunn of the Great Lakes Seaway Trail. "The size is about the height of the average man at the time. They could serve as either a bedroll or a shroud."
The quilts had to be true to the period — in size, pattern, color and fabric.
"These quilts were made to keep a soldier warm or honor a deceased combatant," Dunn said. "Cot to coffin is a historical term we know dates to the Civil War; we moved it up a bit."
It was a bit of a challenge for McCarthy.
"It's a very odd size, unusual, but manageable," she said, "the idea being it would keep a soldier warm while he was alive and, should he be killed, used for his burial."
The exhibit will not be a traditional quilt show, Dunn said, but more of a storytelling event. Each of the nearly 150 quilts to be displayed carries a story. Some entrants researched their ancestors and told the story of a relative who was engaged in the War of 1812.
McCarthy chose instead to write a letter a woman might have sent to go with the quilt she sewed for her husband as he headed off to war.
My dearest Thomas,
It is painful to know that you are fighting another was against Britain so soon after your beloved father fought valiantly in the War for Independence. I am concerned for your safety in this cold winter weather and have gathered fabric from friends to make this quilt. The center piece is from the bed curtains that your parents used. The back is fabric that I had planned to use for a dress and the others are pieces from many scrap baskets. I pray it will keep you warm despite the snow and cold. I await the day when we shall be reunited and can live in peace.
Your devoted wife, Abigail 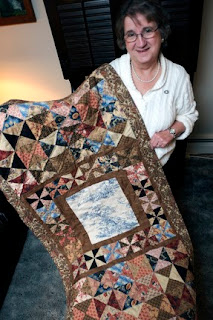 Her piece is a medallion quilt with a central design, then the design is built out from that center. The pattern is typical of the period.
"That is one of the things that came in handy being in the quilt study group because I had seen many antique quilts through the group," McCarthy said. "I have been able to learn a lot about antique quilts, fabrics, including mill information in Massachusetts and New Hampshire. That helped me a great deal in trying to decide what type of quilt to make and reproduction fabric."
The colors are muted, she said, mostly brown, red and blue.
"I went through what I currently owned and, unfortunately, had to do a little shopping," she joked.
Her coverlet is a scrap quilt. As she explained in her letter to Thomas, the fabric had been begged and borrowed. During that time period, there was an embargo on imported fabric, most of which came from Britain and France, she said, so cloth was tough to come by.

The exhibit will reflect that, Dunn said.
"We're finding our exhibitors include everyone," she said, "from a 12-year-old girl making her first quilt to experienced quilters — 1812 quilts would have been made by people of all ages."
The quilts will be displayed March 17 and 18, then 25 will be chosen for a traveling exhibit for the next two years, mirroring the war's duration from 1812 to 1814.
McCarthy hopes to follow her quilt west to see the show.
"I hope (to go)," she said, "but it will depend on the weather."
To read more about the exhibit and the bicentennial, visit seawaytrail.com/quilting.
Posted by Melissa Davenport Berry at 11:34 AM