From A Grand Adventure Looking for Relatives Margaret on the Road

This is a great story and I encourage readers to visit her travel blog.
Margaret has a wealth of information and travels all over searching deep and wide, leaving no stone unturned! We have posted two days worth of her info on the Dole, Little, Dodge, and Brocklebank lines in Newbury, MA, as well as the Blackintons and Richardsons. 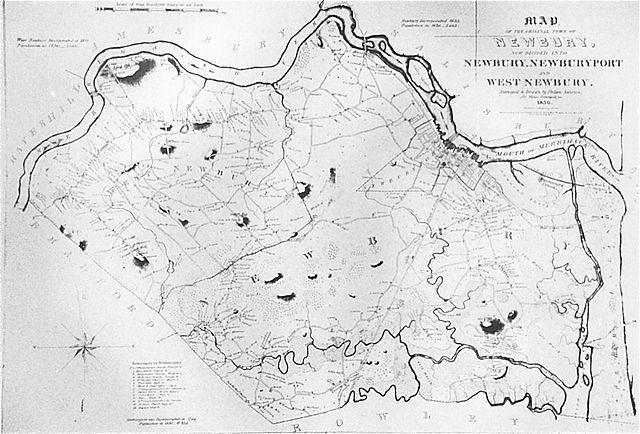 Please note we have included some additional pictures here.
Day 66 Today wasn't nearly as exciting as yesterday. Once again I was knee deep in microfilm, trying to read 17th century vernacular, 18th century handwriting and going cross-eyed peering through blurry 20th century scanning. Samuel Dole's will is one of the very pleasant ones to read. here are some inventory evaluations that you should enjoy. The spelling is theirs, not mine.) 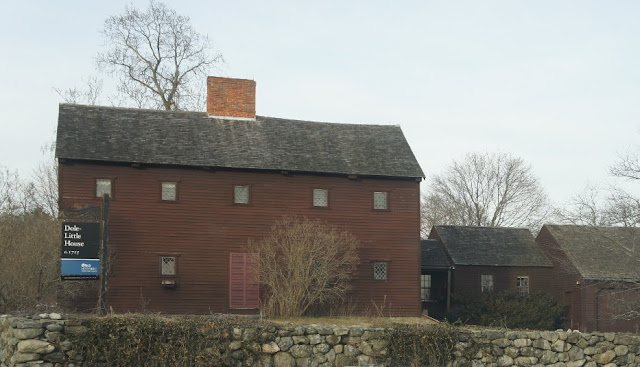 A more difficult document to read is an agreement of Indenture. In this paper, Mathew Soley and Henry Phillips agree that Mathew will pay the value of $150 pounds to pay off a purchase of land. Henry's wife Mary is in agreement with this document. There is more than a page of great explanation about fields, bulls, pump yards, upper and lower parts of the chimney and a multitude of other contingencies that will take me a week to decipher. In addition, the two families agree to create a permanent path to Samuel Ward's Alley that they all can use for the carrying of wood and such without regard to which yard they have to cross. Each family will own half the arbor bordering the path. Date: 20 June 1675. Very interesting but a lot of wok to get one confirmation that Henry's wife's name is Mary.

More of such fun tomorrow!

Yes - I made progress today. Of course it helped that I could actually read the documents and page numbers.

Deeds and quasi-probate information pushed the Dole lineage back 3 generations. Samuel Jr was tied to Samuel Sr., Samuel Sr to his widowed mother Mary and deceased father William plus Mary names her father in an additional document - Samuel Brocklebanks. Yea!!

On the Dodge side, I firmly nailed down the Phineas-John-Phineas-Wm Bradford lineage through probate records. There are lots of Phineases and Johns so to straighten them out and clearly identify who belongs to whom through a combination of records is very satisfying.

Tomorrow and Saturday will be more of the same. At least the 4 day monsoon is over so I walked to the train and library in sunshine before disappearing into the microfilm cave. Off to bed - I am tired.

Today was a day for Blackintons and Richardsons. Both families were from the Attleborough area of Massachusetts - near Providence, RI. Probate records pushed the Blackintons into the 1600s adding three more generations and 100 years to what we knew a few weeks ago. In case you have forgotten - or face it, cared - Olive Blackinton married Henry Richardson. They are the great-grandparents of Abby Jane Richardson who married George Washington Coats. If you are more visual, Abby Jane is the lady who in photos from the 1890s looks like a dried apple woman.

Back to the Blackintons. Our first ancestor in the line is now Pentecost Blackinton, Sr. He was probably born in the mid-1600s. He died in 1715. His will plus a land deed nicely name is wife (Mary) and 3 children (Pentecost Jr, Benjamin, and Elizabeth). 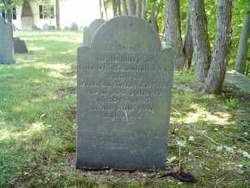 His son, Pentecost Jr., must have been born in the latter quarter of the 17th century since he was married by 1717 and died in 1744. Upon his death, his wife Rebeccah is left with sons Pentecost III, George and John, daughters Rebeccah, Anne, and Mary and 3 sons under the age of 14 requiring a guardian - Othaniell, Peter and Oliver. There seems to be a fair amount of land amassed as there are a plethora of land transactions throughout Pentecost Jr's life and so the family survives.

Oliver overcomes a chaotic childhood and marries Mary Whipple in the 1750s. He dies in 1810. He leaves a generous will in which he names his beloved wife Mary, son Oliver, grandchildren Charlotte, Eliza, Esther, Caroline, Ellis and Samuel, and a daughter - yes! - Olive Richardson. It is so nice that he includes her married name. Now although he has provided handsomely for everyone, he is insolvent and can't pay his bills. Letters go out to creditors including 2 Richardsons - members of his daughter's family-in-law.

For the moment, the story ends here. since both Oliver and Olive were adults when Oliver Sr dies, I imagine they took care of their mother for the last 10 years of her life. Who knows if the grandchildren ever received any inheritance bu most of them would also have been adults by 1810. George Richardson (son of Henry R and Olive B) and wife Lovicy Robbins would likely have been in Maine at this point before making their way to Michigan in the 1830s.

One more day of research remains at the NEHGS before my visit to Boston ends Tuesday morning. I know I won't get everything finished. I will definitely need a return trip! 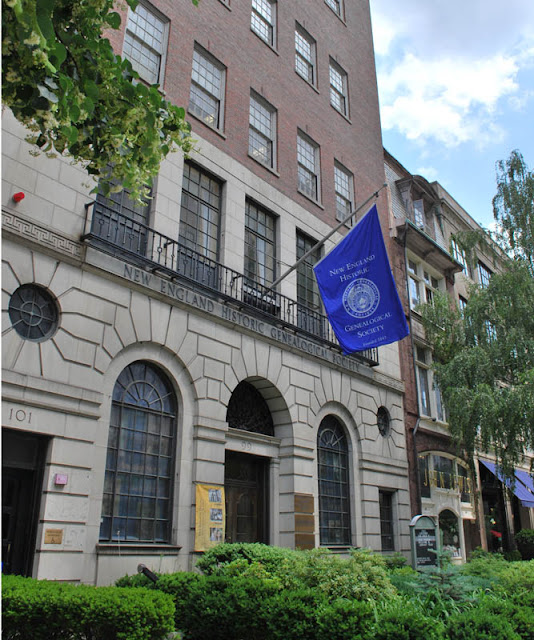 Day 70 Well it is official. I have been on the road for 10 weeks. The time is flying by and I can't believe that the journey is half over. 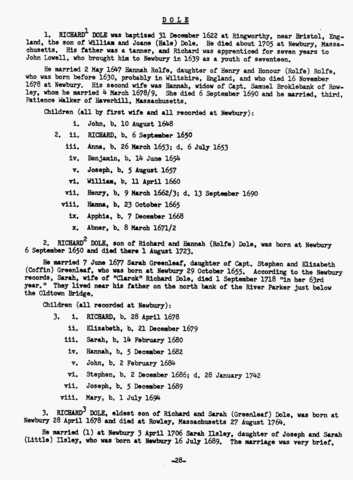 I spent the morning straightening the Brocklebank-Dole mess. Turns out I had all the right players just not aligned correctly. Samuel Brocklebank (10th GG) came from England in 1638 as a child with his widowed mother Jane and brother John. He became a surveyor and married Hannah Rolfe in 1659. They had a number of children and in 1668 built a house in what is now Georgetown, MA. Samuel was killed with his entire company of men in Sudbury during King Philip's War (Indians vs Pilgrims). Hannah Rolfe married a widower from nearby - Richard Dole. He had 10 children from his first marriage and 5 of them married 5 of Hannah's children. This is what I didn't know yesterday and caused a stumbling block in sorting out the lines. Hannah's daughter Mary married William Dole. They begat Samuel Dole who begat Samuel Dole who begat Samuel Dole who married Hannah Little and who begat little Sarah who married Rev. Wm Bradford Dodge - whew! 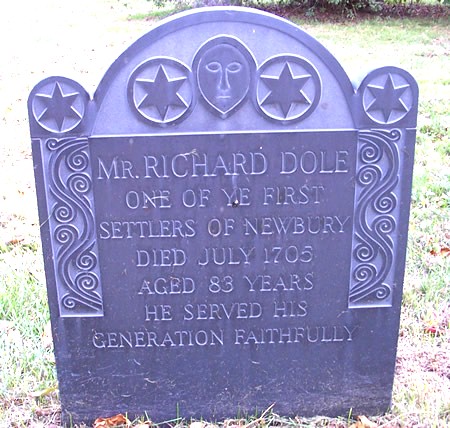 On the way to this new information I found that the home Samuel Brocklebank built in 1668 still exists and is a museum. It is open 2 half days a month and of course today was NOT one of those days but the weather was fine and called for A ROAD TRIP! Off I went. The house is quite large and grants from local historical societies are refurbishing the exterior. Wish I could have gone inside but it was wonderful to walk around the old family homestead. FYI - in the 1750s the home became a tavern - owned by Solomen Nelson whose daughter Lucy married Phinneas Dodge. This means two lines of the family leading to Dodges had connections to this house. What it really shows is how close the communities and how interwoven the families were. 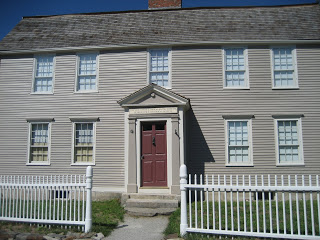 From Georgetown, I drove to W. Newbury and found Capt. Samuel Dole and Hannah Little Dole's gravestones. They are well preserved although Samuel's stone is difficult to read. They sit on a hill under a lovely oak tree. Hannah was born in 1757 and lived a long 86 years (see stone). Then it was on to First Burying Ground Cemetery in Newbury. I searched for several hours but no luck finding Richard Dole or Hannah Rolfe Brockelbank Dole's graves. Lots of other familiar surnames - just not the 2 I was looking for.

After a long day, I met Doug and Cynthia for a nice waterfront dinner in Essex. This was our last meal together as they are staying in Boston to work and I will be in Acton for 2 nights before moving to CT.
Posted by Melissa Davenport Berry at 9:12 AM