From Sketches of Lynn, Or, The Changes of Fifty Years by David Newhall Johnson

According to the sketch of the history of the Friends in Lynn, prepared by Samuel Boyce for Parsons Cooke's "Centuries," the first meeting of Friends in Lynn was held in a house on the old road to Salem, near the Lynn Mineral Spring Farm. Such, says Mr. Boyce, was the tradition, based upon a statement in "Neal's History," that about this time (1658) as many as twenty were taken at once from a meeting held at the house of Nicholas Phelps, "about five miles from Salem," and that Nicholas Phelps' house was about five miles from Salem--this house is not stated. This is a mistake. 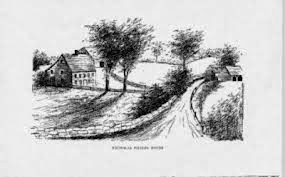 In History of Salem Perely mentions the home of Nicholas and Hannah Phelps (location West Peabody) was around until Francis Phelps tore it down in 1856 but an oil painting was done and a Mrs Maria Hood of Danvers has it in her collection.

The Historical Collection of the Essex Institute shows that the estate of Phelps was near the farms of Robert Moulton and Thomas James, in Salem, now West Peabody. A notice of a meeting held there June, 1658, is found in "Felt's Annals of Salem."
"At a monthly meeting held in Salem, the 28th of the twelfth month, 1688, it was concluded to have a meeting once a month settled at Lynn, for the ease of those Friends who are inhabitants there."
By the records of these meetings the first monthly meeting held in Lynn met at the house of Samuel Collins, May 18, 1689, when the following-named persons were present: Thomas Made, Daniel Southwick, John Blothen, William Williams, Samuel Gaskin, Jr., Samuel Collins, Thomas Graves, Edward Gaskin and James Goodridge.
Mr. Boyce savs: "By referring to the records of the meeting, it appears that Friends in Lynn suffered severely for many years by having their property taken from them by distrait for priests' wages, repairing meeting houses, and for military fines. Much of the property taken for priests' wages was for Jeremiah Shepard."
The numbers of Friends increasing in Lynn, they built (1678) a meeting house on what is now Broad Street, on a spot then known as Wolf Hill. This house stood a few rods east of Silsbee Street, andoccupied the land — until 1723 — in front of the present Friends' burying ground. The next was built near the front line of that enclosure, the front extending to the present road bed. Its dimensions were, forty feet in length, and thirty in width, besides an extension on the northeast side, used by the women of the society to transact their part of the business of the organization, according to the usages of this body. This house served the purposes of the society for ninety-three years, or until 1816, when, having outgrown its too narrow limits, a new house was built by the society, on the lot used by them as a burying ground, a few rods — in the rear — from the site of the old meeting house. It stood on this spot until 1852, when it was moved a short distance to its present location on Silsbee Street. 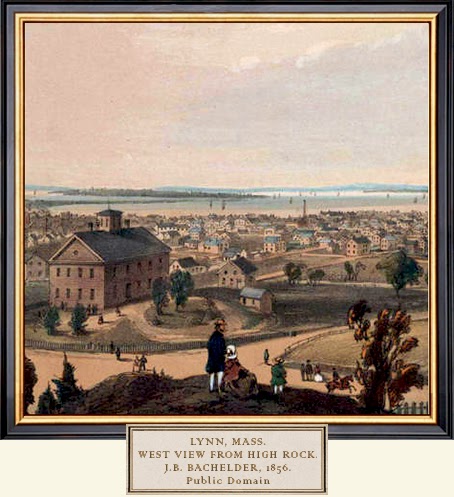 The old meeting house was bought by Thomas Rich, and moved a few rods to the westward and used by him several years as a warehouse for the sale of shoe stock. About 1830 it was used by Samuel Boyce as a shoe manufactory; and about five years later it was bought by James Breed, and moved near to his wharf, to be used as a lumber warehouse. It now stands on the same spot, at the corner of Broad and Beach streets, and is owned by Stephen N. Breed, son of James, above-named, who succeeded to his fathers business. Though it is now a hundred and fifty-seven years old, its stout oaken frame has kept its symmetry intact; white occasional repairs, and the art of the painter, have concealed its marks of age. The R extension" was bought by Nathan Alley, and moved to Exchange Street, opposite Exchange Block, and used by him as a dwelling. It now stands on Fayette Street, opposite the school house, near Collins Street. In 1835 there were about one hundred families belonging to the society in Lynn; and there was but little change during the next twenty years. At' present their numbers are somewhat less.
Posted by Melissa Davenport Berry at 6:54 AM