From Dorchester Illustration of the Day by Earl Taylor and adds from Melissa Berry
The North Burying Ground Dorchester, MA 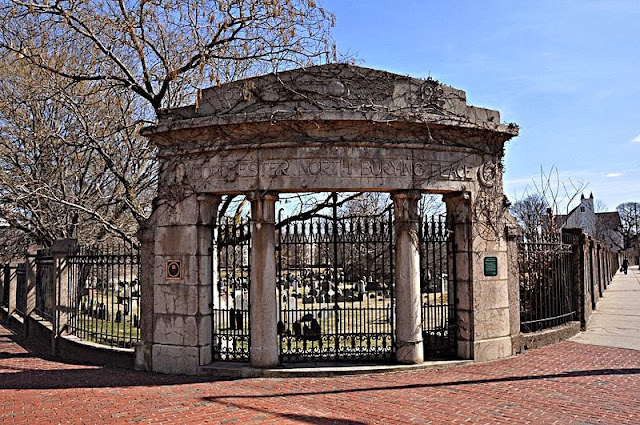 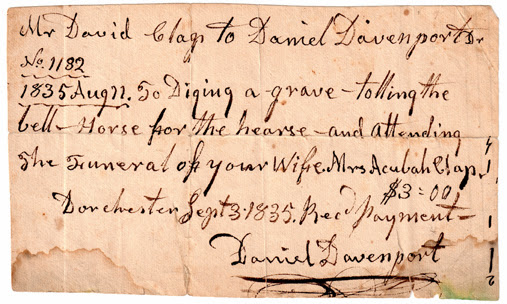 A receipt for $3 from Daniel Davenport to David Clap for digging a grave for David’s wife Azubah Clap in August 1835. Davenport tolled the bell and furnished the horse for the hearse.


The following is from The Clapp Memorial. Record of the Clapp Family in America Ebenezer Clapp, compiler. Boston: David Clapp & Son, 1876.

David Clapp, oldest son of David and Ruth (Humphreys) Clapp, was born in Dorchester, Nov. 30, 1759, and died there May 15, 1846, in his 87th year. He married, Dec. 9, 1794, Susannah Humphreys, daughter of Henry Humphreys, of Dorchester (who in 1752 married Abigail Clapp, daughter of Ebenezer and Hannah Clapp). Mrs. Susannah Clapp died Jan 27, 1800, and David married second, July 28, 1801, Azubah, daughter of Deacon Jonathan Capen, of Stoughton, born there March 20, 1766. She was a woman of much energy of character, and was ever ready to give assistance when needed among friends and neighbors. She brought with her from her first home the then common household utensils of the hand-loom and spinning-wheel, and for many years after marriage made use of them in supplying cloth for family use. She died in Dorchester, of a cancer, Aug. 10, 1835, aged 69 years.

From article Relics of Ye Olden Times. The Historical Magazine: And Notes and Queries Concerning the Antiquities, History, and Biography of America pics added
The old Dorchester burial ground on the corner of Boston and Stoughton Streets can stately be called the oldest, most historic and most interesting of any burial place in this State, if not in the whole country. It is the oldest, because it contains, or did contain, the oldest tombstone known to exist in America. 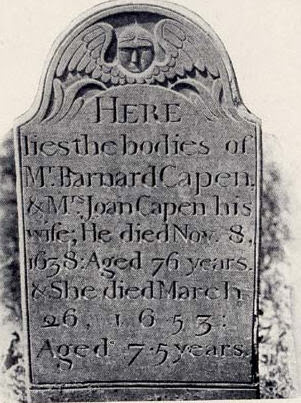 Photo by Don Blauvelt This stone stood over the graves of Bernard Capen, who died November 8, 1638, and Mrs. Capen, his wife, who departed this life March 26, 1653.

It was found many years since by Mr. George Fowler, who had charge of the grounds, slightly imbedded in some loose earth near the grave, while another stone of slate, with a fac simile of the original inscription, stood and still stands over the oldest known grave in America, and this duplicate is thought to have been erected some time about the beginning of the present century. The original slab, which is of real sandstone, was taken in charge by the Antiquary Society, and is at present on exhibition at the rooms of that society on Somerset Street, Boston. Some would naturally think that the oldest gravestone would be found at Plymouth, but, although the Pilgrims lost many of their number, long before the colonization of Massachusetts Bay by the Puritans, they strove to keep secret from the hostile Indians the true facts of their loss and weakness, and to do this they secretly and quietly buried their dead comrades without leaving behind them either mound or stone. Photo by bill Llott 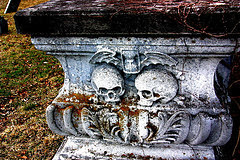 Mr. Fowler is a jolly old gentleman, who bears his eighty-four years with resignation. He was superintendent of this graveyard for twenty-eight years, being first employed by the town of Dorchester, previous to its annexation to Boston in 1869, and since then by the city of Boston.

Mr. Fowler has had a great many visitors, and particularly on Sundays. Men come with their wives and children to see the old graves and quaint inscriptions, and from showing them around and pointing out those of particular interest, he has come to know the location of each grave so that he can point out any particular one and give the history of the person buried, from one side of the burial ground to the other. 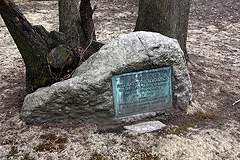 The power of the old gentleman's retentive memory is plainly seen in his reading of epitaphs and inscriptions, written in ye olden time style, while standing at the head of these old tombs. The old Capen grave is situated in the extreme corner of Boston and Stoughton Streets. In this corner arc all the older graves, it being the original burying ground, a great many of the graves being covered with huge slabs of rough stone imbedded in the earth.

"Well," said Mr. Fowler, •' I suppose you'll only laugh at what I am going to tell you now, but it's truth, sir, living truth. When our forefathers first commenced to bury here the wolves used to come at night and dig into the graves for the dead bodies. So whenever anyone was buried a great slab of stone was placed over the grave to prevent the wild animals from getting at the bodies." To the left of the Capen grave, and in a line with it, stand seven slabs of slate, each bearing the name of Capen, the latest date being 1746. The second oldest gravestone in the ground gives no surname to tell who is buried beneath, but simply bears this rather odd inscription:

Abel, his offering accepted is His body to the grave his soule to bliss On October's twentye and no more In the yeare sixteen hundred 44." On the other end of the stone is the following epitaph, which tells that a child is also buried beneath.

"Submite submitted to her heavenly King  Being a flower
of that Eternal Spring Neare three years old she dyed,
in heaven to wate. The year was sixteen hundred 48."


Next we come to the Foster plot of ground where is buried •• "The Ingenious Mathematician and Printer, Mr. John Foster." John Foster was the first printer of Boston, and died in 1681, at the age of 33. Beside his grave is also buried his father, Hopestill Foster, who died in 1676, and his brother Elisha Foster, who died a year after him.

To the right of Hopestill Foster's grave is the tomb of General Humphrey Atherton, who died in 1661. 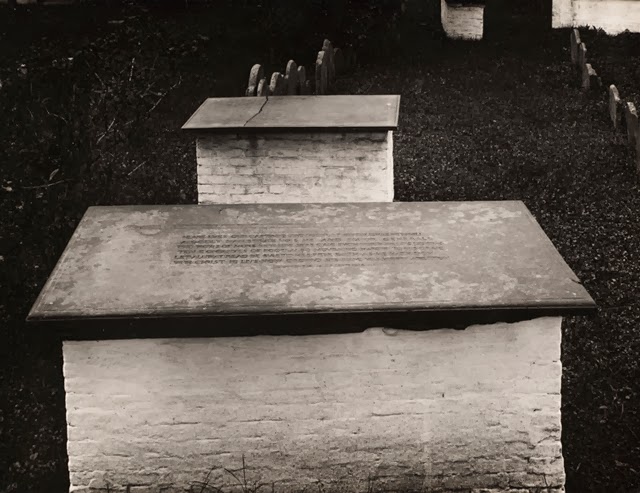 On the cover of the tomb, which is of sandstone, is carved the representation of a sword, and the following epitaph:

"Heare lyes our Captain and Major of Suffolk was withall
A Godly Magistrate was he and Major General!
Two trups of hors with him here came such worth his love did crave
Ten companyes of fort also mourning march to his grave
Let all that read be sure to keep the faith as he hath done
With Christ he lives now crowned, his name was Humphrey Atherton." 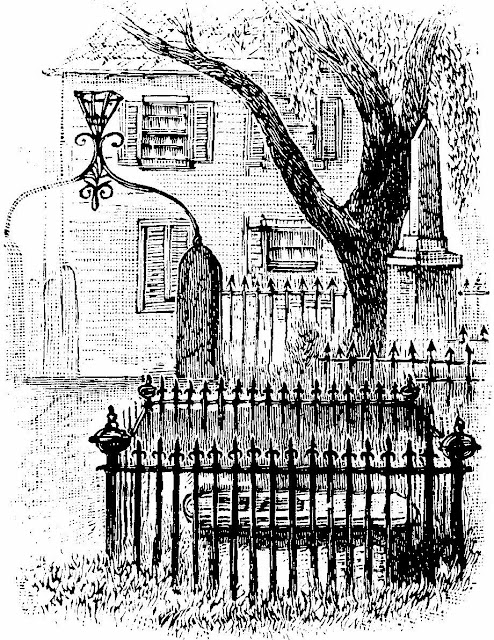 A few feet to the left of this is the tomb of Richard Mather, the grandfather to Cotton Mather, who died in 1669. 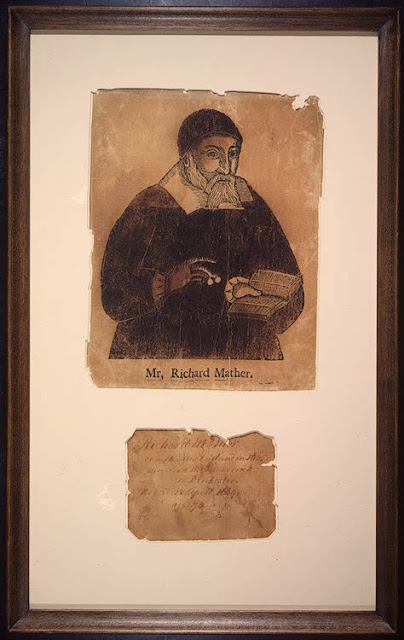 James Humphry, one of the ruling Elders of the Town of Dorchester " was buried beside him in 1686, it being his wish to be buried in the same grave if there was room.

Governor Stoughton is another of the old tombs, as he was buried here in 1671, but the tomb was partly rebuilt in 1828 by Harvard College, to which institution he had given considerable money. Photo by Kim G Other old gravestone names and dates are Miriam Wood, a school teacher, 1653; William Poole, a schoolmaster, in 1682; Clement Topliff, 1672; Parson Flint, "late pastor of ye Church in Dorchester," 1680; and Thomas Joanes, after whom Jones Hill (Pic below) is called, 1678. 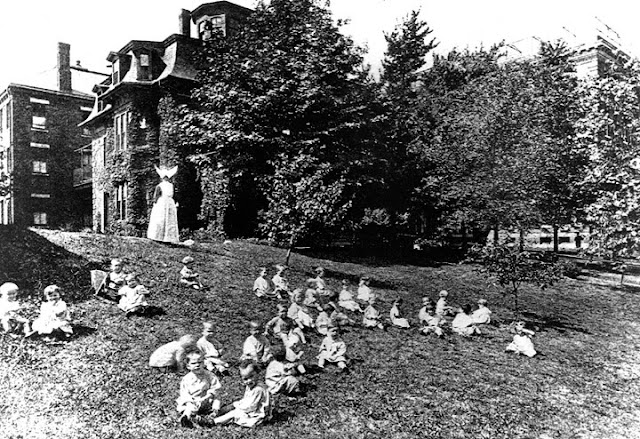 This is certainly the only cemetery in America in which there has been a constant and regular interment for 250 years, from 1638 to 1888, for there are still people being buried in this old ground. An interesting grave and monument is that of old " Uncle Daniel Davenport," who was sexton of the burial ground for many years, and dug and completed his own tomb, and had his epitaph written years before his death. He attended 1.135 funerals in his time and dug 735 graves. His son William was sexton from 1848 to 1865, and had buried in that time 1,267 people. Mr. Fowler has broken the record of his predecessors, having buried up to January I, 1890, 1,532.

Mr. Fowler tells many a quaint, odd story, one being of a woman who didn't like the idea of her surviving female relatives wearing her fine dresses when she was gone, and in consequence had the choicest ones in her wardrobe put in the coffin with her. 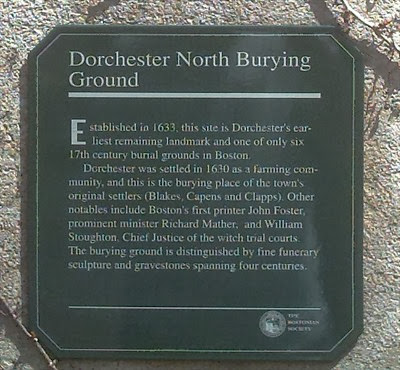 Another is that of a man whose wife had died and was buried in a temporary grave until such time as he could have another lot set off. After years had elapsed, he married again, and together with his second wife came to see the removal of the coffin of wife number one to the new grave about seven years after her death. When the coffin was taken up, wife number two expressed a great desire to have it opened that she might see the body. Mr. Fowler did not like the idea and told her it would be an offensive sight, but when she had gotten her husband's consent, her wish was complied with. The coffin was opened, and though nothing remained but the skeleton, there shone on one of the fingers a beautiful diamond ring that looked as bright as if it had just come from the jewelers. She looked at it a moment, and then, stating that it was too great a temptation, deliberately took it from what had been the dead woman's finger, and wiping it with her handkerchief placed it on her own finger, where Mr. Fowler saw it displayed on the train a short time ago after the manner of ye traveling man.

While my neighbor Fowler was superintendent of the Dorchester burying ground. Governor Gardner's son called at the grave yard and desired to go into an opened vault. He was given permission and ordered not to touch anything. Soon afterward he was seen leaving the yard with something hidden under his arm. On being questioned, he replied: "It's only a skull; I'm taking it home to study and I'll bring it back again." As Sexton with my spade I learned
To delve beneath the sod,
Where body to the earth returned,
But spirit to its God,
Years rwenty seven this toil I bore,
And midst death's oft was spared;
Seven hundred graves and thirty four
I dug, then mine prepared.
And when at last I too must die,
Some else the Bell will toll;
As here my mortal relics lie,
May Heaven receive my soul.